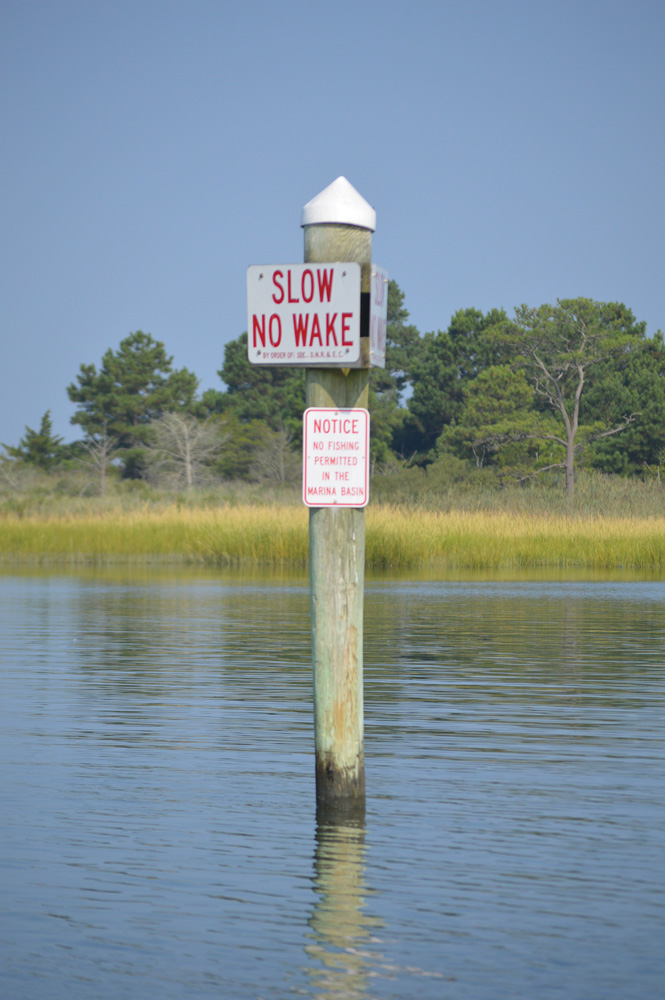 Boaters ignore — or are ignorant of — boating rules

There’s a time and place for speeding boats. Sure, it can be fun to zoom along the open water — but ignoring the “Slow/No Wake” signs can cause a wave of trouble.

“Most folks come down, and they go in the boat, they have no regard for the wake behind them. They look forward, they don’t look behind,” said Capt. Doug Messeck of DNREC’s Fish & Wildlife Natural Resources Police. “That wake can extend out several hundred yards, and it impacts the shoreline, boats on docks, swimmers…”

Wake is the trail of disturbed water left by a boat’s passage.

And if anyone else asks those speeding boaters to slow down, “It’s not usually a friendly gesture they get back,” Messeck noted.

According to Delaware boating regulations, “Slow/No Wake” means “as slow as possible without losing steerage way and so as to make the least possible wake. This almost always means speeds of less than 5 miles per hour.”

(“Steerage way” is the minimum speed required to make a boat respond properly to movements of the rudder.)

Wake can be caused by a fast or slow boat. When boaters gun the engine but move too slowly, “it’ll lift up the boat and push down the back and … it displaces that water” for a bigger wake, Messeck said.

“You have to be going slow enough that you’re still going forward and can maintain steerage,” Messeck said. “It’s a two-part factor that we’re looking at, it’s slow and no wake.”

A slow/no-wake condition is required within 100 feet of shoreline where “Slow/No Wake” signs are displayed, as well as docks, launching ramps, near swimmers and marked swimming areas, and any anchored, moored or drifting vessels.

In fact, no one may operate a vessel except at slow/no wake speed in any canal, pond or marina under the jurisdiction of the division — which includes much of the local boating area outside open water.

The police aren’t out with radar guns, but they do enforce the “no-wake” rule.

“We will stop them, conduct what we call a ‘boarding,’ notify them of the reason for the stop,” and then issue a verbal warning, a written warning or a citation.

Federal, state and local governments may hold operators responsible for any wake damage caused to moored boats, bulkheads and shorelines (including erosion). A wake violation is a Class D violation — a minimum of a $50 fine, plus court costs, but not reported in an individual’s criminal history, Messeck said.

Additionally, boaters could be looking at civil lawsuits if they cause someone’s parked watercraft to crunch into a dock.

As more boats filled the local waters in 2018, DNREC extended the no-wake zone in the Lewes-Rehoboth Canal near the entrance to Rehoboth Bay. That was deemed necessary “to address public and navigation safety, increased boat usage and speeding, shoreline erosion and property protection,” officials said. “The area has seen an increase in recreational and commercial boating traffic over the past few boating seasons, which has led to increased complaints of wake violations.

Residents along the Assawoman Canal have seen the soil, and even trees, from the neighboring banks crumble into the water.

South Bethany officials consider it a two-part environmental issue. Churning water not only erodes the shoreline, but it also agitates the muddy layer of sediment and releases old, entrapped nutrients from the canal beds into the water column. Those nutrients can lead to algae blooms and reduced oxygen, which can cause fish kills.

“Each time the ‘slow/no wake’ is ignored, you are damaging the bulkheads; you are stirring up the muck on the bottom of the canals that pollutes our waters; you are impacting boats tied up; and you are rocking the world those canoeing, kayaking or fishing.”

“Most people, I think, have no idea they are creating a wake,” Council Member Sue Callaway recently said. “It’s really not good for the water quality, as well as the bulkheads and docks.”

Her fellow council member Frank Weisgerber agreed: “People seem to think [it’s OK] if they’re doing less than 7 mph. … ‘I’m only doing 3 mph.’ That’s not the point. The point is we need to slow down so you’re not creating wake.”

“The speed and maintaining steerage depends on your boat and its characteristics,” the flyer says. “‘Slow/no wake’ varies with boat model, waves, current or even wind.”

According to the flyer, “Most boats have two 5 mph speeds:

“The first, with the throttle clicked just forward of neutral, is called ‘idling in gear’ — so that the engine is turning at around 600 rpm.

“The second 5-mph speed is the one in which the engine is turning about 1,300 rpm. At this engine speed, there’s more thrust. But the boat is squatting, resulting in a bigger wake and no increase in speed.”

The authors of the South Bethany flyer actually encouraged people to hold each other accountable:

“If you see a boat creating wake as it makes its way down our canals, make a downward motion with your hand, signaling the driver to cut the boat speed. If the boater chooses to ignore your request, you have the right to take pictures and capture the boat’s name, boat description and its registration numbers on the side of the boat,” and to contact the Natural Resources Police.

Boaters sometimes forget the many elements involved in boating on open water: other boats, sun glare, sun exhaustion, heavy weather, wind or tides can add to the mayhem.

“All those things add up, and decrease from your awareness and capacity to drive,” Messeck said. “Above all, pay attention on the water, don’t operate under the influence, and pay attention to what you’re doing, and know your limitations.”

This May, a person died when a 16-foot boat capsized in Rehoboth Bay near the Lewes/Rehoboth Canal.

“It’s not like driving a regular car down the highway,” Messeck said.

Many people “buy a boat with as much horsepower as you want, dump it in the water, and go,” Messeck said. But they don’t have a full grasp of navigational laws that extend in a 360-degree radius — not just the straight path of a highway.

Delaware also requires anyone born in or after 1978 to take a Basic Boating Safety Course before operating any motorized boat, including personal watercraft, on Delaware waters. The credentials are reciprocally recognized between U.S. states.

“That course teachers you ‘rules of the road,’” said Messeck. “The boater safety credential … is akin to a driver license.”

It’s a one-time course, but Messeck encouraged people to get refreshers, perhaps registering for the course with their children or grandchildren in later years.

People can document or report fish, wildlife and boating violations to the Delaware Fish & Wildlife Natural Resources Police by calling (302) 739-4580 or through the free “DENRP Tip” mobile app for smartphones.