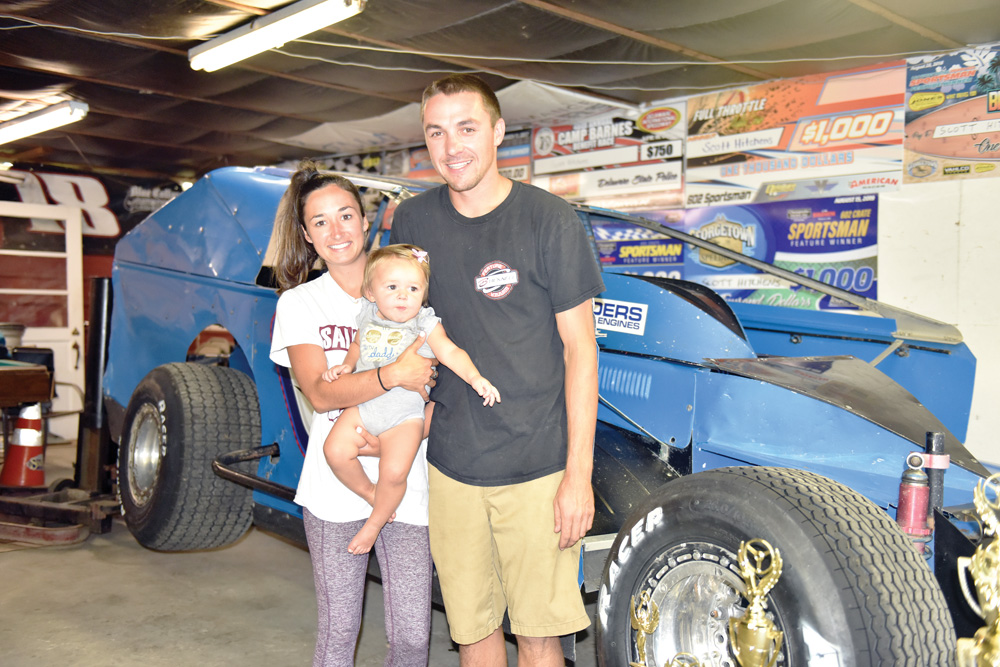 At just 26 years old, Scott Hitchens of Frankford has the résumé of a more seasoned racecar driver.

Hitchens was a mere 8 years old when he started racing karts at U.S. 13 Kartway on the grounds of Delaware International Speedway in Delmar. Fast-forward 12 years, and Hitchens finds himself competing in an AC Delco Crate Modified car, while waiting for the motor in his Big Block Modified car to be rebuilt. He hopes it will be in time for this February’s “Speed Weeks.”

Along the way, Hitchens has raced just about every type of dirt and asphalt racecraft out there, at tracks from Pennsylvania to Florida.

Hitchens quickly learned that to race the best, you had to go where the best were racing. He hooked up with HP Speed Shop in Georgetown, and traveled up and down the East Coast with Chad Hayes and his family, competing in regional and national races.

The Dirt World Championships, still held today, are the nightly highlights of Daytona Kart Week. When Hitchens competed there, it was in the middle of kart racing’s heyday— 3,600 or more racers entered the weeklong karting mecca that year, most of them dirt racers, like Hitchens.

Hitchens was among 90-some Junior Sportsman racers entered. Nearly 500 karters had to be qualified. It would be early morning before qualifying was complete.

“I was 11 years old,” Hitchens recalled. “I remember falling asleep sitting in the kart a couple of times while we waited for our turn to qualify.”

While he doesn’t remember the times of his best of three laps, he does remember the feeling he got when they announced his time was fast enough to make the main.

“We were tickled that we made the show,” Hitchens reflected. “I don’t remember whether I finished 12th or 13th” among the 40 entries. “We were real tickled with that finish. It was like we’d won the race.”

He stayed in karting for another year or so, but he was itching to find something faster. He didn’t have to look far. Racing innovator, driver, promoter, chassis builder and small racecar creator Walt Breeding of Milford had the answer: race in his then-relatively-new Performance Racing Pro Challenge Racing Series.

“We raced the Pro Challenge for four years and had a lot of fun with it,” Hitchens said. “They would fly.”

For the next four years, Hitchens raced his Pro Challenge truck at asphalt tracks up and down the East Coast. The Pro Challenge tour took him to Volusia County Speedway in De Leon Springs, Fla., billed as “The World’s Fastest Half-Mile,” and to All Tech Speedway in Lake City, Fla. From there, they traveled north, stopping at tracks in Georgia, North Carolina and South Carolina, and at Virginia’s historic South Boston Speedway.

“Walt Breeding started the series,” Hitchens said. “He built the cars and ran the series. We raced them for three or four years. They were a lot of fun. I met a lot of people racing in that series. I met NASCAR driver Randy La Joy and his son Corey. They raced that series. We’re pretty good buddies now.

“In fact, I’ve got a Randy La Joy seat in that car,” Hitchens added as he pointed at his blue No. 65 crate car. “Randy takes care of us with those.”

He noted that NASCAR cup driver Darrell “Bubba” Wallace Jr. also competed in the Pro Challenge circuit at that time.

Breeding built the Pro Challenge into a national touring series. But just when the series really took off, Breeding was diagnosed with cancer and was forced to sell the series and sanctioning body to John Litzinger and his wife, who moved it to their home in Blountville, Tenn., where they manufacture the cars and trucks and operate sanctioning services.

“After that, we ran some Limited Late Models on asphalt for a couple of years,” Hitchens said. “They’re like a Crate class on asphalt. We raced them at Orange County Speedway in Rougemont, N.C., and Coastal Plains Raceway in Jacksonville, N.C.”

Hitchens and his fiancée, Taylor, now have a young daughter, Hayden, with whom he wants to spend time. So, after many years traveling from racetrack to racetrack, Hitchens decided to sell off all of his Pro Challenge cars and equipment, keeping only what he needs for the crate car and the Big Block Modified car, which he plans on racing locally, mostly at Delaware International Speedway.

“It’s hard to race down there” in the South “when you live up here,” he explained.

While he’s waiting for the rebuild of his Big Block motor, Hitchens decided to put together the privateer unsponsored AC Delco Modified ride, for fun.

“We got a dirt modified car in 2010 and decided to race a couple weekends a month, but as it turned out, we started racing every weekend.” he explained. “We started going to Delmar,” to Delaware International Speedway. “Then we went to Bridgeport Speedway in New Jersey and all over the place.

“We ran down in Volusia County, Fla., during Speed Weeks for the past two years. We had the Big Block, and our fire-extinguishing system went off on pit road,” he recalled. “When we went out — I don’t know why, but the sensor failed, and our motor sucked all that fire extinguisher stuff. We sent the motor to our engine builder.

“This is how we got here with the crate car. We didn’t want to sit around and not race, so we decided to race the crate car. We keep running it. It’s a good old car. It just keeps running and winning. We won the championship at Delmar in 2014. We ran it every week. I was racing for Jake’s Marine back then, and he was very good to me.

“In 2017, I was driving my own car, and drove Blade’s car when I had time. We didn’t intend to run for the points championship at Delmar last year, but we wound up winning it. This year, again, we didn’t set out to win the championship, but here we’re looking good in the points race,” Hitchens continued. “We pretty much just gotta show up every week and we’ve got it.”

Meanwhile, Hitchens is having fun and winning races near home. So far this season, Hitchens has two wins at Georgetown and four at Delaware International Speedway, where he’s leading the Friday-night points chase.

“At the beginning, we couldn’t do anything right, and now we’re winning races,” Hitchens observed with a laugh. “We did win the first time we raced this blue car. We’ve been using the same setup since. I got this one working, and if it stops working, we’ll go back to the drawing board.

“There’s a mystique about this car. It comes out looking like the underdog, with a blank sticker. The Big Block car is stickered up, and it looks great.”

What keeps him in Victory Lane?

“I keep my foot on the floor,” he replied with a laugh, adding, “Never ever underestimate your competition, because if you do you’ll lose.”

Running a Crate Modified car requires a team and team leader. Mark Betts, known around the pits as “Papa B,” is the crew chief. Herm takes care of tires. Also on the team are Blake Young, and Brandon “Big Dog” Blades, whose company, Blades HVAC, also helps financially. Brent Hearth, Bryan Marvel and Hitchens’ dad, Greg Hitchens, also are a part of the team. Hitchens’ fiancée, Taylor Cox, and their daughter Hayden are all a part of the team, too.

And, if he gets his Big Block in time for Speed Weeks, he’ll take both cars to Speed Weeks this year.

When he’s not busy with the race car, Hitchens runs his business, Scott Hitchens Enterprises Inc., a commercial and residential demolition company.