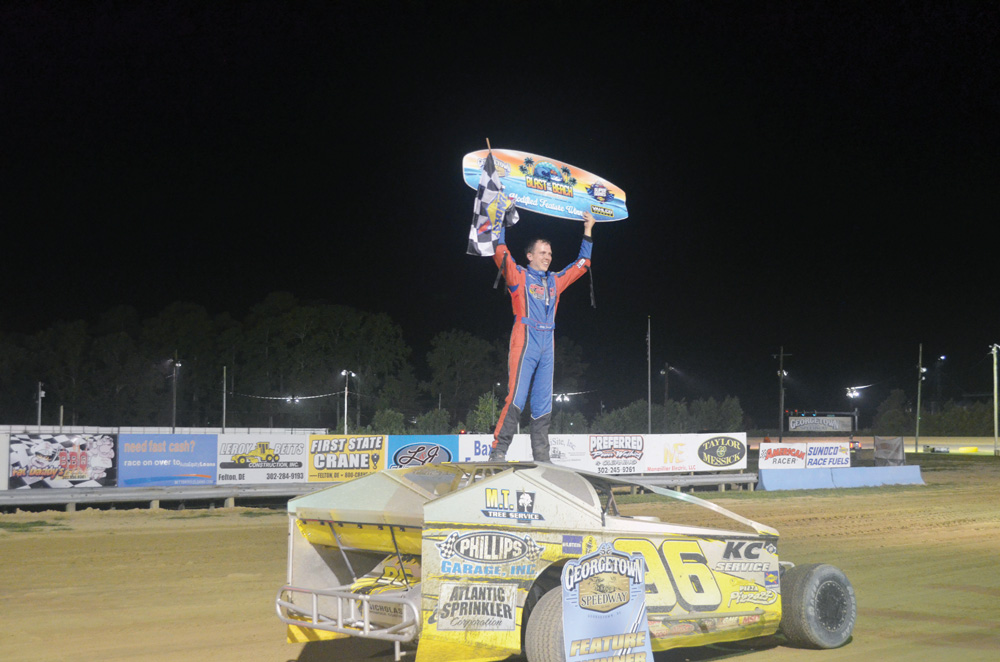 A total of 35 Short Track Super Series (STSS) Modifieds, 33 STSS Crate 602 Sportsman, 15 Delaware Super Trucks, and 13 Delmarva Chargers, for a total of 96, were entered in the race, which will be nationally-televised on MAV-TV (formerly TNN).

“There are cameras and camera crews all around,” promoter Brett Deyo told racers during the drivers’ meeting. “They are in the pits, in the stands and all over the place. Try to ignore them as best you can and go about as if they weren’t here.”

MAV-TV will air the show in October. It will include clips from each race and show the winners’ interviews.

Starring in that show will be Milford, N.J.-based Billy Pauch Jr., who beat Matt Sheppard of Savannah, N.Y., to the L&J Sheet Metal stripe with a 3.031 seconds cushion. Pauch pocketed $6,350 for winning on the fast half-mile progressive high-banked clay oval. The initial $6,000 came from the advertised purse. He earned an additional $200 for being the Precession Hydraulic & Oil halfway leader. Another $100 came from Jones Racing Products What Drives You, and $50 came from Bill Brown & Company for the “Move of the Race” Award.

Andy Bachetti of Sheffield, Mass., captured the Modified pole by nipping Sheppard at the stripe by 0.726 seconds in the Jones Racing Products Dash. Along with bragging rights, Bachetti earned $500.

With Bachetti and Sheppard ahead of him, Pauch fought his way to the front from a fourth-place start. The early laps saw multiple caution flags flying, working to Pauch’s advantage. On Lap 3, a caution flag waved for a seven-car pileup taking out top contenders including Milford’s Joseph Watson. Also taken out were New Jersey racers Jimmy Horton, Brandon Grosso and Ritchie Pratt Jr.

After a lap-six caution, the field settled down and began racing. Pauch threaded his way through the field past Bachetti, and with 22 of 35 laps still to be raced. From there, he was perfect, slowing only for a Lap 20 caution before leading them across the stripe.

“It was really heavy tonight, and our motor was really operating tonight,” said Pauch. “I was pretty tickled pink about that.

“It’s always good when you win, but hats off to these guys for coming out tonight. I think they’re the best,” he added, pointing at the spectators.

Reigning Chesapeake Paving STSS Crate 602 Sportsman South Region points leader Jim Housworth led most of the 20-lap feature. Then, on Lap 16, Tom Sherby of Petersburg pulled next to Housworth and carried the momentum into the lead. In the last three laps, Sherby pulled away from the points leader, building a 2.083-second advantage he carried under the checkers for his first-ever win in the Crate Class.

“It was definitely a battle,” said Sherby, who pocketed $1,500 for the win. “I was running the rough line in the track, just making it work around the potholes, trying to pick off everybody I could until I could get to the front. I started eighth, so it was a little bit of a struggle and a little challenging at the beginning, but here we are in Victory Lane.”

Housworth’s second place was good enough to hold onto his title. Behind him, teenager Justin Grosso’s third-place finish was a career milestone. Rounding out the top five were Joe Toth and Cole Stangle.

“The track was great. It was really good,” Martinez said. “It had a lot of bite, especially on the high side. We were able to run the cushion and keep the speed up. I think that was the key. The motor purred like a kitten. We were struggling in June and July, so we tore down the motor and put new parts in it, and she’s responded. We got a second, third, and now a win.”

In addition to cash prizes, each race winner received a surfboard trophy.