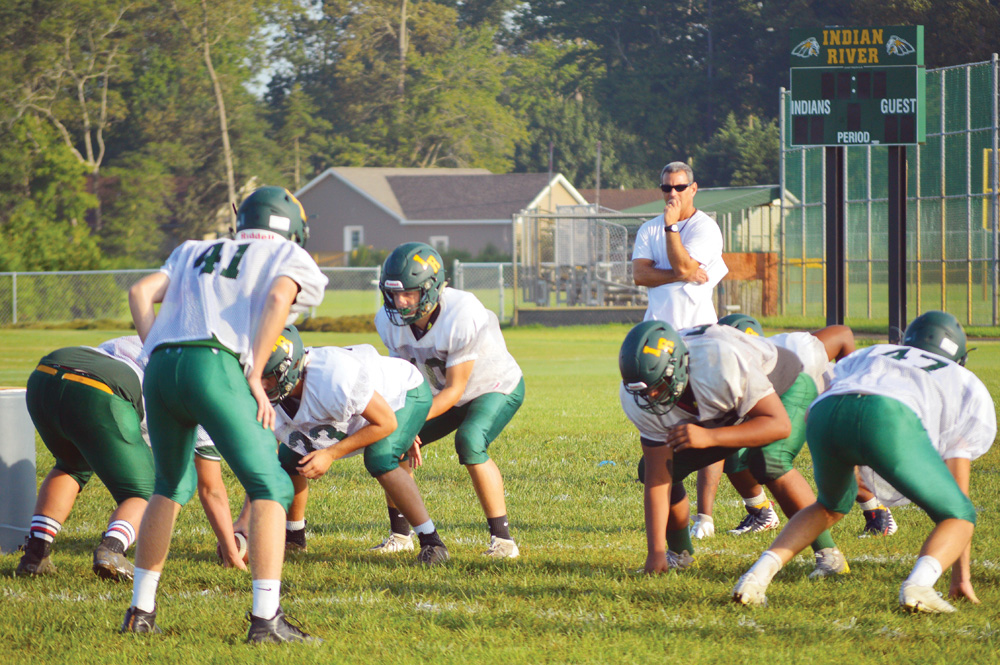 IR season-opener against Milford moved up by Dorian

All the two-a-days and scrimmages are over. All the days and nights of preparation have led to this weekend. And, just to throw some extra drama into the picture, a looming hurricane named Dorian has pushed up the schedule by a full day.

It’s Week 1 in the high school football season for Delaware schools, including the Indian River Indians.

IR head coach Phil Townsend and his staff have spent countless hours preparing their squad for the upcoming 10-week grind. They’ve had to work out new quarterbacks to take over an offense that struggled throughout much of 2018. They’ve had to replace some key pieces to both sides of the ball, due to graduation.

Despite all that, the Indians feel they are ready to go, and they were set to get their first chance to show just how ready they are a day earlier than planned — hosting Milford on Thursday, Sept. 5, after the scheduled Sept. 6 home opener was bumped up a day by Hurricane Dorian. Kick-off was still scheduled for 7 p.m.

The Indians have been looking to avenge a 48-6 loss to Milford from last year. A game that was played, coincidentally, in cold, rainy weather, and one that left a very bitter taste in the mouths of the Indians. The Bucs have moved up to a DIAA Division I ranking this year.

Last season, the Indians’ offensive struggles were well-documented. During their 3-7 campaign a year ago, IR averaged just 215.7 yards and 15.0 points per contest. They also turned the ball over 3.3 times per game.

Their best game offensively came in a huge 44-28 win over Laurel in which they had season-best efforts across the board. Running 88 plays, the Indians gained 569 yards, while turning the ball over just once.

It’s that type of effort — and a strong returning group of seniors — that Townsend and his staff are certainly hoping to see more of this season.

Townsend will turn the signal-caller duties over to junior Reese Stone. Stone is quick and knows the offense after having spent limited time running it last season as a backup. Hayden Hall provides IR with a strong, tough presence on the second unit, but how quickly he picks up the intricacies of the offense will ultimately determine his success in running it.

The ground game is fortunate enough to have two of its lead backs returning to the fold. Seniors Ta’Jon Knight and Jodiah Morris are looking to improve on their numbers from a year ago.

Knight had the highest per attempt average, at 5.1 yards, after carrying the rock 48 times for 245 yards. He also scored five touchdowns. Morris had 197 yards on 56 totes, for a 3.5 average, with one touchdown.

Sophomore Dalton Hall could also see time in the backfield after coming off his first high school season, in which he had 223 yards on 48 carries, for a 4.5 yard average.

The passing game is in good hands with senior receiver Nicholas Angelo back on the outside. Last year, he had 17 catches for 316 yards and four touchdowns. Joining him will be big target Lucas Weber. The junior tight end stands at nearly 6-foot-4 and should provide the quarterbacks with a nice safety valve underneath. He caught just two passes last year, for 69 yards (42 and 27), but those numbers figure to take a big leap forward this year.

Defensively, the Indians have eight of their top tacklers back from a year ago, namely senior linebackers T.J. Moore, RJ Rybicki and Jodiah Morris.

Moore, the likely captain of the defense, made 72 total stops last year, and also picked up an interception. Expect more of the same from him this year. Rybicki will look to increase his strong effort from 2018, when he made 35 tackles to go along with a sack and an interception. Morris had 33 tackles, four sack and a tackle for a loss, which resulted in a safety.

Up front, along the defensive line, seniors JaQuan Floyd and Ramond Turner will look to turn up the pressure on the opposition’s quarterbacks while also causing fits to their run game. Floyd was tops along the line last year with his 37 tackles and three sacks. Turner had 30 stops and a sack, and joined Morris on that tackle for a loss that caused the safety.

The secondary should see some stability, with the likes of Angelo and Knight back in the mix. Last season, Angelo had 14 tackles, a fumble recovery and two interceptions. Knight was credited with 17 tackles.

With the strong group of returning seniors and a talented crop of underclassmen, the Indians certainly have the pieces in place to return to their winning ways.

It was all set to kick off Thursday, Sept. 5, squeaking in before the potential arrival of a would-be spoil-sport named Dorian.