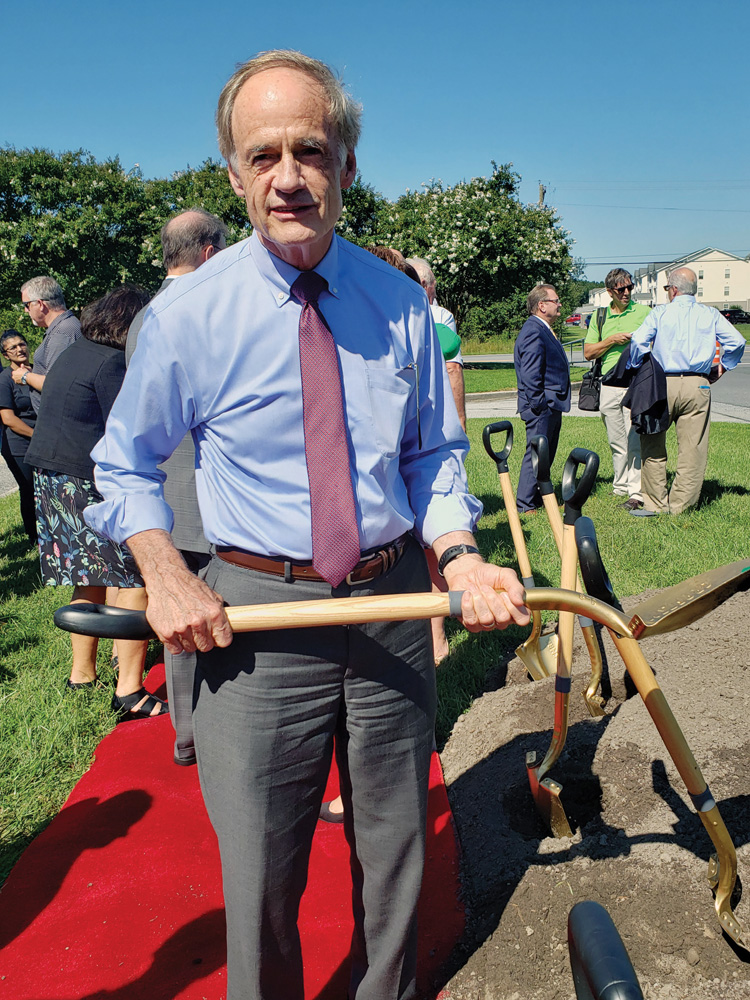 Carper, appearing in good spirits and a bit playful, stood with others holding gold shovels, counted down from 10, then ceremoniously tossed dirt in the air, to rousing applause from those gathered on the Jack F. Owens campus.

Carper was instrumental in getting funding for the center that will train students in diesel mechanics, at the first such center in the region. Construction should be finished by November of 2020.

Funding came from a grant from the U.S. Department of Commerce’s Economic Development Administration, in the amount of $1.97 million, plus $1.8 million from Delaware’s Higher Education Fund, $120,000 from the Sussex County Council, and donations from businesses, organizations and individuals.

The total cost to build the center is $5.4 million.

In addition to government support, more than a dozen organizations and individuals pledged donations “that enabled Del Tech to secure the 35 percent match required by the EDA, including the USDA Rural Development program and the Delaware Automobile & Truck Dealers’ Association,” according to a news release issued by the college.

Labor market data indicates that more than 3,000 automotive technicians and more than 800 diesel mechanics are employed across Delmarva, with average annual earnings of $39,874 and $44,595, respectively, according to the news release.

“There’s a long list of people who helped. I want to say ‘Thank you,’” Carper said, giving remarks from behind a podium on the sunny morning of Thursday, Aug. 29.

In the future, automobiles will likely be electric, he said, but there will be combustion engines for some time “and we will need folks who can work on them,” he said.

The audience laughed when he talked about his beloved Chrysler Town & Country minivan, which has more than 500,000 miles on it. He’ll be looking for a new vehicle eventually, he said, although he doesn’t see an immediate need, especially since the minivan recently got a new battery.

It has been a challenge to find enough trained mechanics to work on vehicles, he said.

“We asked, ‘What can we do to help?’ Everybody said, ‘A trained workforce.’ And we came up with the idea for this new automotive center,” Carper said.

The center will double the number of students being trained, from 20 to 40.

Among those also attending the event were Sussex County Council President Mike Vincent, County Administrator Todd Lawson and Terry Megee, owner of Floyd A. Megee Motor Company, one of the business owners who donated.

During remarks, Megee joked that Carper had bought his minivan 40 years ago.

He said there are 750,000 automotive technicians across the country, and 76,000 more will be needed as the industry grows and as long-time mechanics retire.

“That’s job security for you guys,” he told Delaware Tech students attending the groundbreaking, informing them the average annual salary is $69,000.

Delaware Tech President Mark Brainard said that, for years, employers have told college officials they were being forced to hire mechanics from other states.

“There is plenty of evidence to support the need for this facility. Today is only possible through the power of partnerships,” he said.

“Too often, when there is a need, we get words. Tom Carper didn’t talk about it. He did something about it,” Brainard said.

“This center will give students on Delmarva a great-paying trade to learn, allow them to stay and raise a family in the area, instead of moving away for work, and give our area dealerships and diesel operators the workforce they so desperately need. This is a win-win for Delaware’s economy now and in the future,” Brainard said.