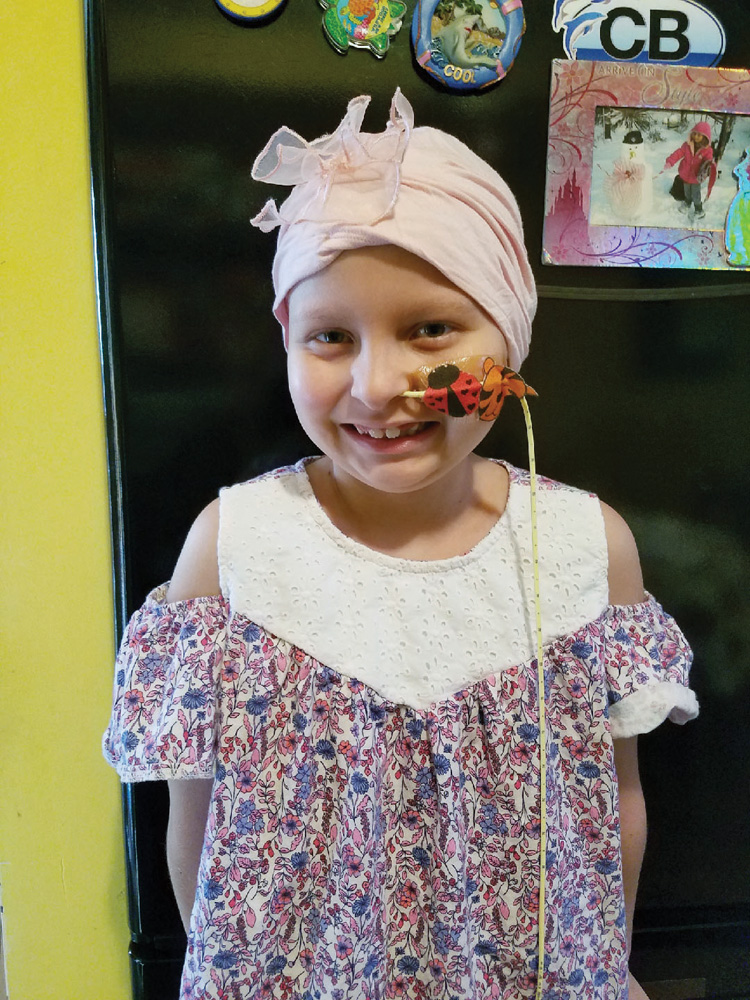 In the photograph, Aurora Limmer, pretty in a long red dress with white flowers, her bookbag next to her in the driveway, is smiling cheerfully, ready for her first day of school last year.

“Our Princess,” her grandmother called her, when she posted on Facebook on Monday morning that the Ocean View resident, a fourth-grader with a captivating smile, had died Sunday evening. She was diagnosed with neuroblastoma in November 2018.

“I am deeply saddened to inform everyone that our Princess had gotten her wings last night at 8 p.m. Our little 9-year-old lost her fight with cancer. My heart is broken. She fought so very hard. She was an only child, an only grandchild and only niece. She was cancer-free but the treatments took her from us,” her grandmother posted on Monday morning.

“She may not be here with me any longer, but I will always love her. You’re my hero, Aurora,” the child’s mother, Lauren Limmer, added.

“She loved to ice skate,” her grandmother told the Coastal Point on Tuesday morning, her voice breaking. “She also loved to swim. It was like she had a mermaid tail to swim in the pool with. She liked tennis. We kept her active to keep her healthy. She loved math.

“She had a dog, a shih tzu-Pomeranian mix named Little Bear. We took him to the hospital. She got to feel him. She was kind of sedated. He wanted to kiss her face so bad, but he couldn’t because she had a breathing tube in. He did get to kiss her hand,” her grandmother said.

“She was a very nice little girl. She came here a lot. They stayed here. We did a fundraiser for her here,” said Mary Nuriddin, front desk manager at the hotel.

In April, the Carousel organized a skating party, with proceeds from the $10 skate rental going to the family. Also planned were a bake sale, silent auction and 50-50 drawing.

“She asked the teacher if she was scared. She said, ‘It’s OK to be scared. It’s your first day. I’ll help you,’” Web said.

“I was talking to some of the teachers about her, and when you say her name, you think of this smile that went from ear to ear. She was very thoughtful of others, a real sweetheart. She had that beautiful smile and these eyes that sparkled,” Webb said.

“She never hurt anybody. Her best friend’s name was Mia. They went to daycare together, so they knew each other since they were 2 years old. They had this bond,” Limmer said. Mia visited Aurora in at Alfred I. duPont Hospital for Children in Wilmington, where she was hospitalized for months.

In her final weeks, Aurora was kept sedated and couldn’t speak, “but I think she could hear us,” Limmer said.

“She really had a rough time, but she was trying to fight. One of the last things I heard her say was, ‘I’m scared.’ We told her not to be scared. We were holding her.

An active little girl who defended other children who were bullied, and who was drawn to babies and toddlers, Aurora started to feel sick the day before Thanksgiving 2018.

“She had a stomachache. They kept saying it was a urinary tract infection, then they said she was constipated. One of the doctors finally sent her to have an ultrasound, and they said she had a cyst on her ovary. They sent us to duPont right away, and they told us she had cancer,” Limmer said.

Aurora had a tumor near her kidneys and uterus, and the tumor began to push on the kidneys, causing them to fail. Still, she maintained a positive attitude.

“Lauren hurried up and made a birthday party for her. It came out great. There were 19 kids there. One of the ladies from the hospital that found out about it, she brought little girls dressed up like princesses to the party. It was raining, so we had it at the Millville fire department. They took all the kids for a ride in the fire truck. The Ocean View Police Department came, and they gave Aurora a badge. They had a pinata. The kids had a great time,” her grandmother said.

Funeral arrangements weren’t yet final mid-week, but Limmer said it will be at the family church, St. Luke’s Catholic Church in Ocean City.

“I want to fill the church up. Aurora always said she wanted to be famous. She wanted to be a famous skater, so we want her to know how important she was to everybody, and to thank everyone for their comments and their concerns. I read over 1,000 comments after she died,” she said.

They included one from Mary Smith Stella, who wrote, “My heart is breaking for you! Aurora is now your little angel who will forever watch over you,” and, from Michelle Hopkins, “She’ll always be with you, sweetie. Just not in the physical form. She’s always right near you with those big, glittery angel wings.”

Sunday morning, Lauren Limmer had alerted family and friends that if they wanted to see Aurora, “You need to do it soon because she really doesn’t have much time with us. Her kidneys and liver are failing.”

Along with her grandmother and mother, she is survived by her mother’s fiancé, Mike Connor, who Limmer said was supportive and stayed at the hospital with the family, and two uncles, Vincent Wilson and Francis Wilson.

An earlier GoFundMe page was stolen and became inactive, Denise Limmer said, adding that there are no current fundraisers. Neither she nor her daughter have worked recently, because they wanted to be at the hospital with Aurora, but they are in financial need. Also, Limmer said she needs help with repairs at home, including broken frames around the windows and a leak from the roof into the chimney.

The family is hoping to have a fountain erected in Aurora’s memory.

“We were kind of hoping money would be collected to put one up with a Disney theme. Aurora made a wish to go to Disney, but she didn’t get there. Maybe a fountain with Mickey and Minnie in the garden at A.I. duPont or in Bethany. Maybe in Bethany,” she said.

“We sure are going to miss her, but we know she’s at peace. Her mother and I were crying, then we both stopped crying and, all of a sudden, we felt peace. We both felt peace.”