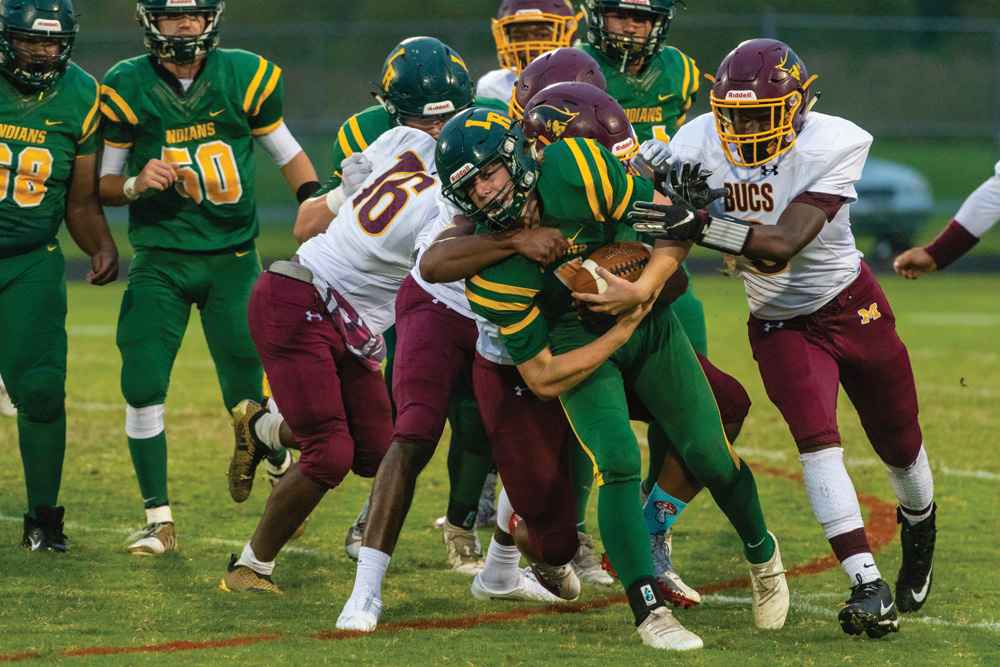 Turnovers spell fate for Indians on the gridiron

The Achilles heel for any football team is generally their ability to take care of the football. Turnovers can give opponents short fields and shift the momentum in games very quickly.

Such was the case in the 2019 season-opener for the Indian River High School football team last Thursday night, Sept. 5, against visiting Milford. The Indians coughed the ball up four times —including on their first possession of the game — and allowed a special-teams touchdown on a punt en route to a 34-0 loss to the Bucs.

“We didn’t really start out real well with the short field. The wind didn’t help us,” head coach Phillip Townsend said after the game. “We tried a little swing pass,” he added of the opening drive, “and we told these young guys all week that if it goes behind you, it’s a live ball.

“Defensively, I’d love to see the stats. I don’t think [Milford] had more than 300 yards of total offense. We gave them short fields,” he said of the turnovers, “and then a lot of miscues … a punt return. We were a little down on ourselves.”

For the game, Milford managed just 172 yards on its 46 plays (3.7 yards per play), while the IR offense struggled along the front line to contain the Bucs’ pressure. Offensively, the Indians were only able to muster 68 yards on their 41 plays (1.6 yards per play) from scrimmage.

With underclassmen all over the field, many of whom were seeing their first varsity action ever, it was understandable to Townsend that there were some hiccups. It’s especially difficult to duplicate actual game speed in practice for those young players to transition onto the field.

“We have a lot of key positions right now with young guys,” Townsend added. “Milford capitalized on our mistakes, and it was 14-0 at half. To me, it was zero-zero. I mean, they capitalized on the short field, and then we had a fumble or interception. Gotta clean up the mistakes. On kick-offs, guys are kind of just looking at the ball. It’s all growing pains.

“Milford,” he said, “is a good football team. You gotta give them respect. I just felt like we didn’t play as well in the second half as we did in the first, and I don’t know why. We’ll have to get to the film and look.”

Extra points: The game was moved up to Thursday due to the potential for inclement weather of heavy rains and winds forecasted for Friday night from Hurricane Dorian. Despite the change, there was a nice home crowd in attendance for the contest, including a supportive, vocal student section.

On to the next: There’s no time to dwell on the opening loss for the Indians, as they will travel to Polytech this Friday, Sept. 13. The Panthers struggled mightily in a 41-0 loss to Lake Forest last week in their season-opening contest. Last season, Poly cruised to a 42-13 win over IR on the turf at the Kent County Recreation Center.

The keys for the Indians will once again be their ability to take care of the football, limit their penalties and mistakes, and make sure they finish their tackles on defense.

During the 2018 contest, IR ran 54 plays that led to 273 yards. They turned the ball over four times, and committed eight penalties for 85 yards. It was a game in which the Indians lost a couple players due to injury as well.

Senior wide receiver Nicholas Angelo scored one of the two touchdowns in that game for IR.