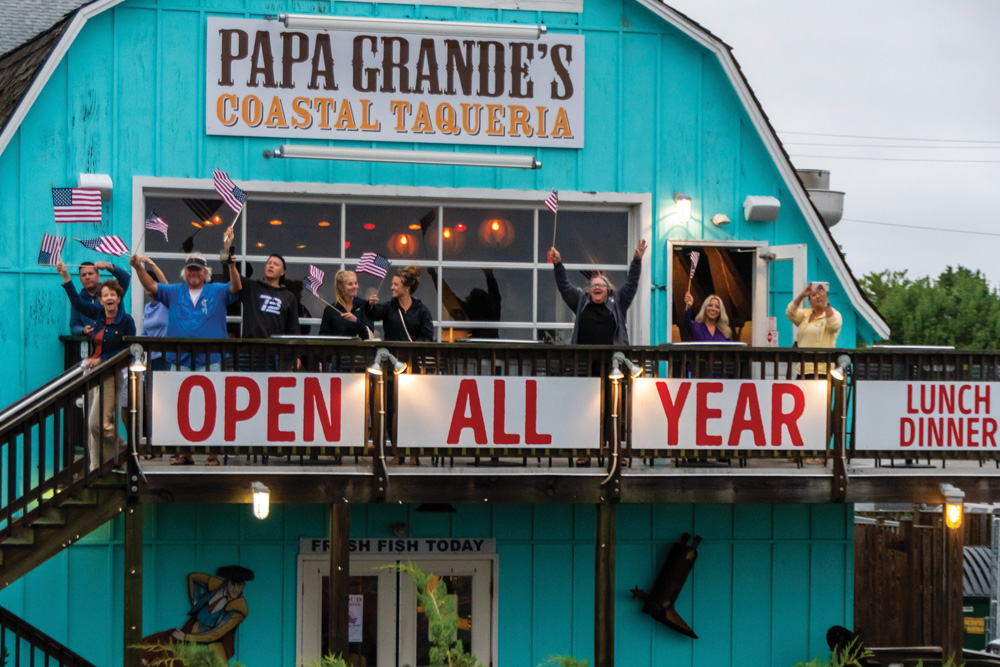 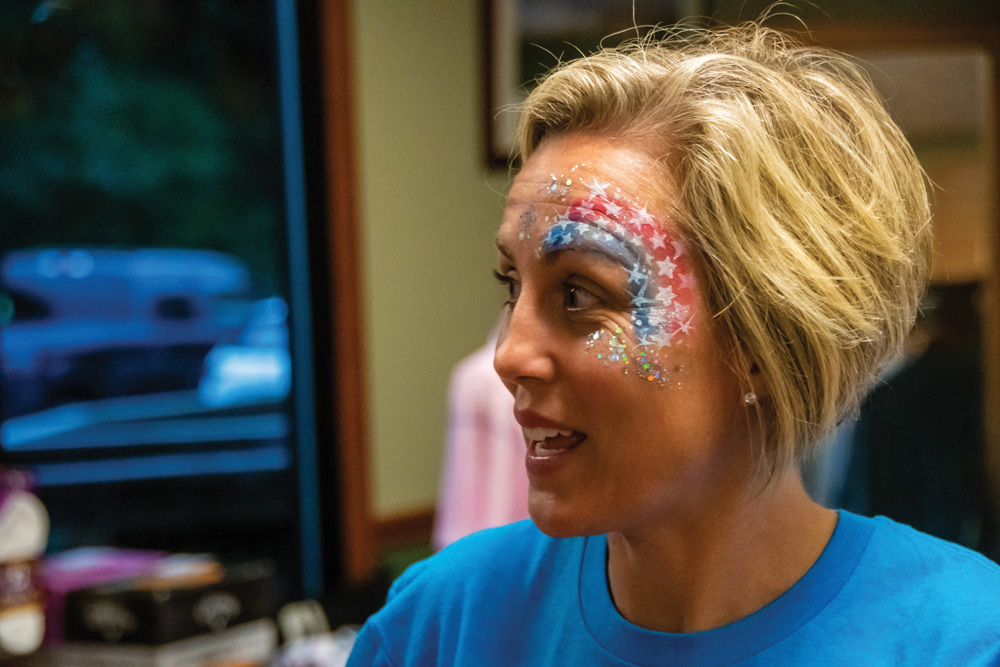 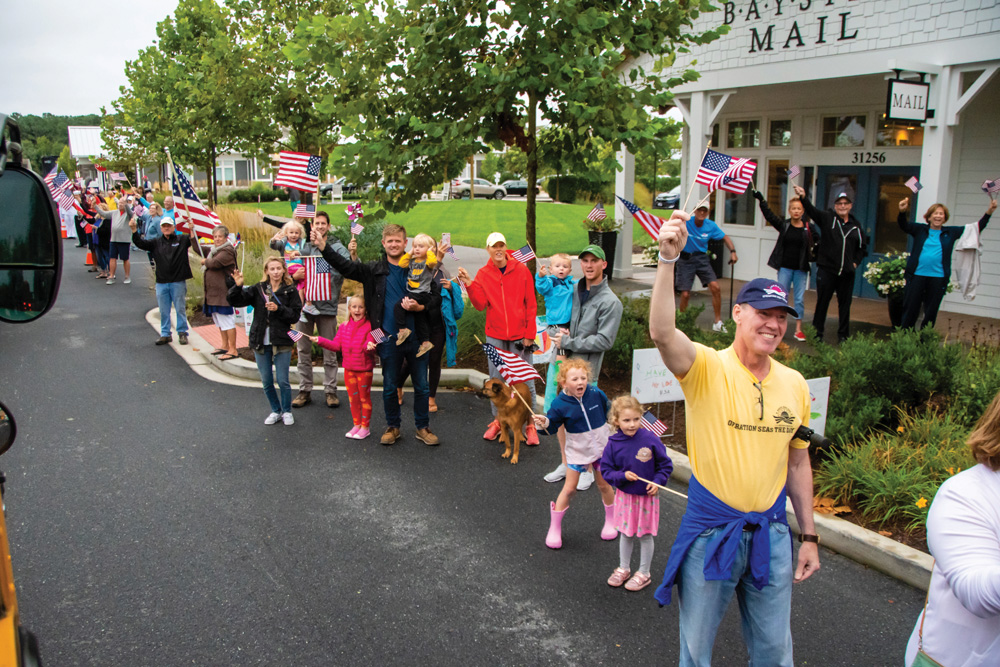 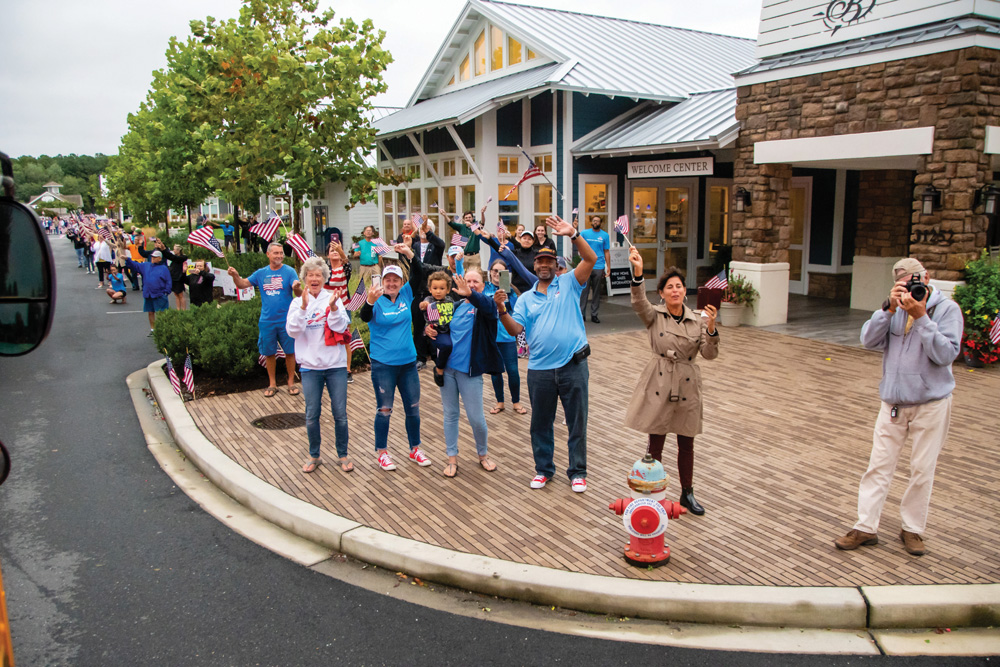 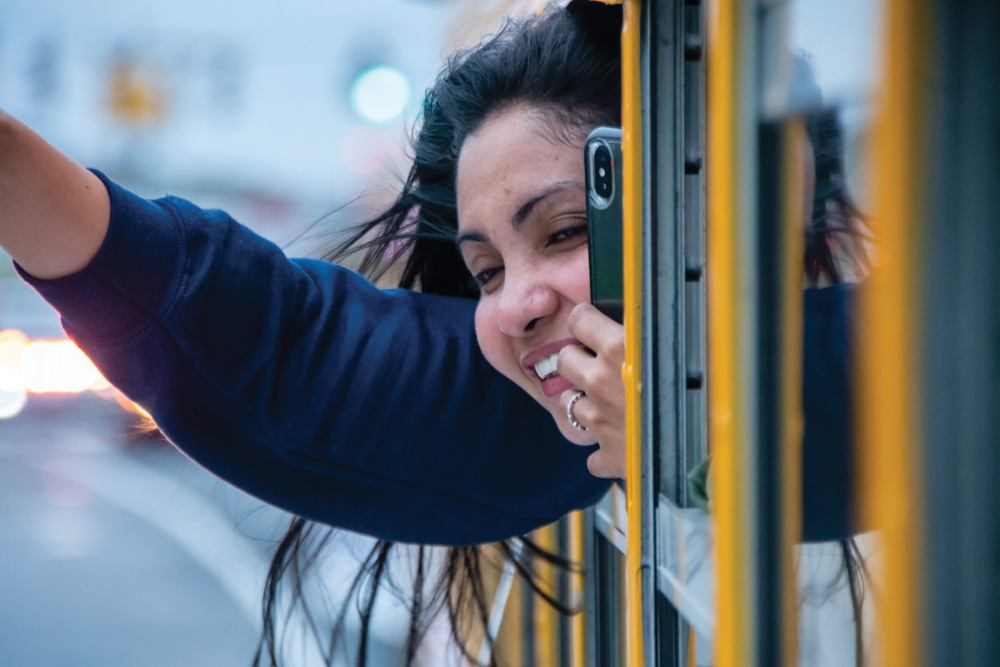 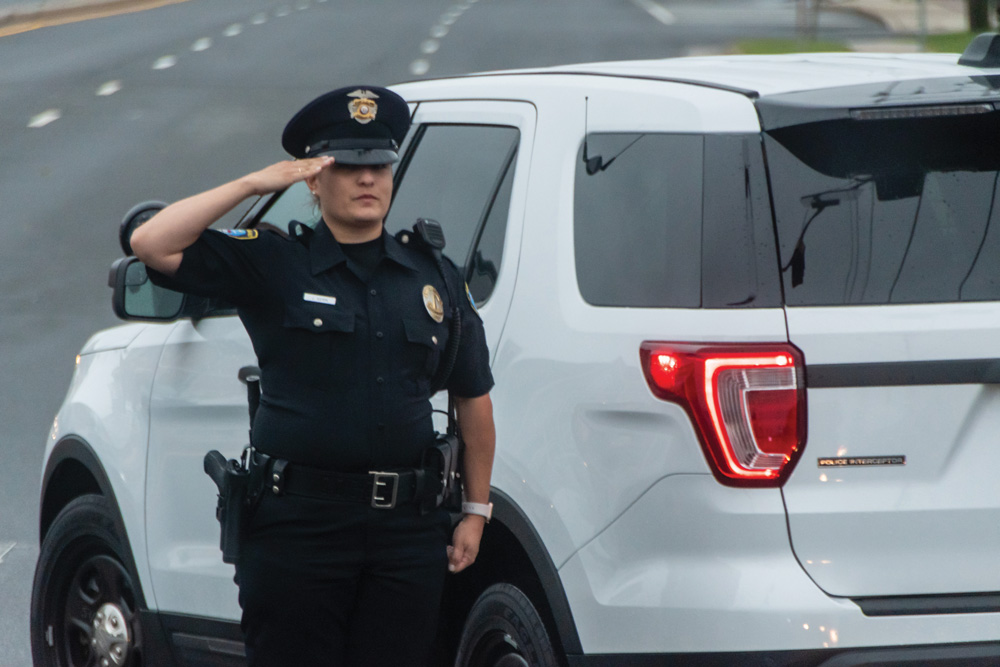 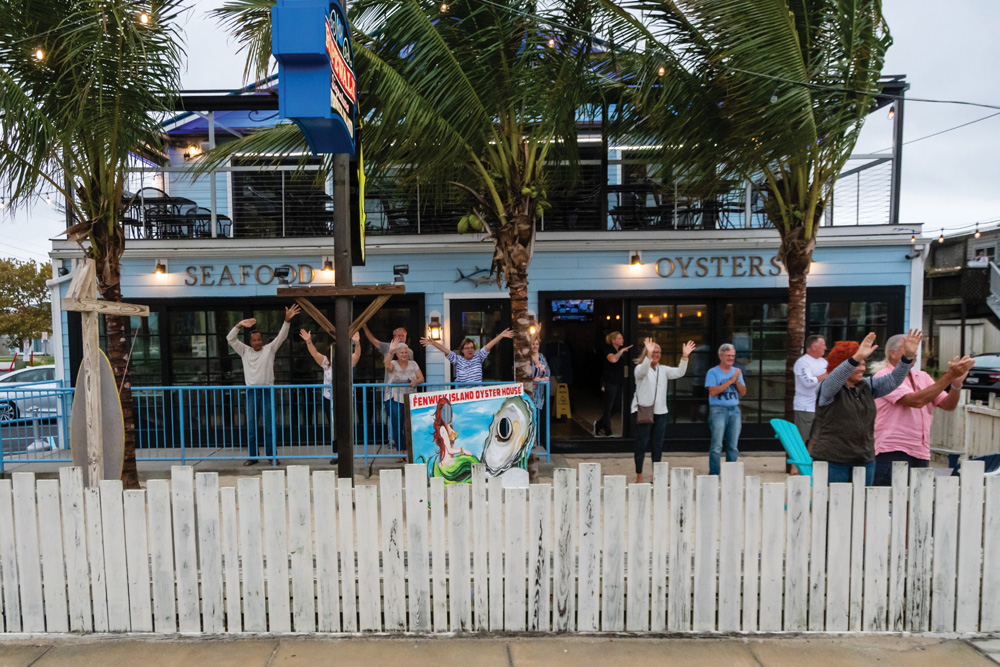 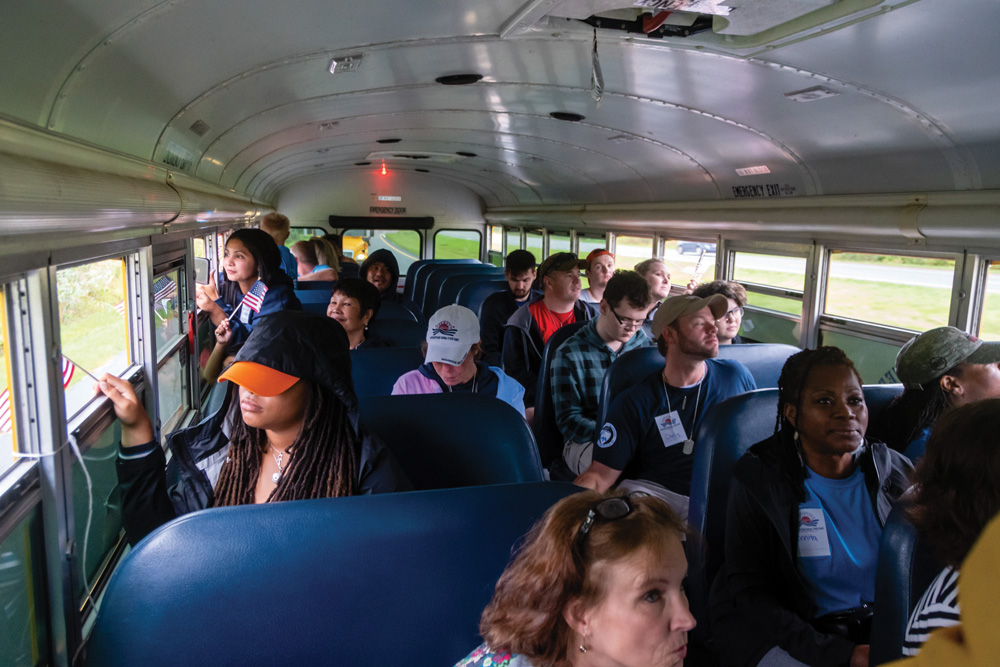 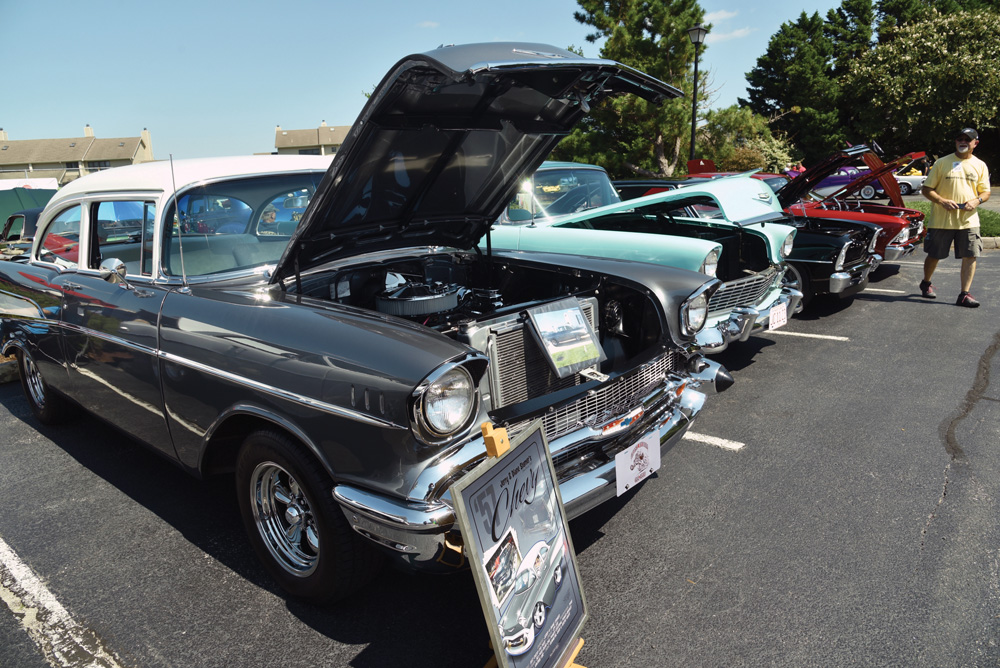 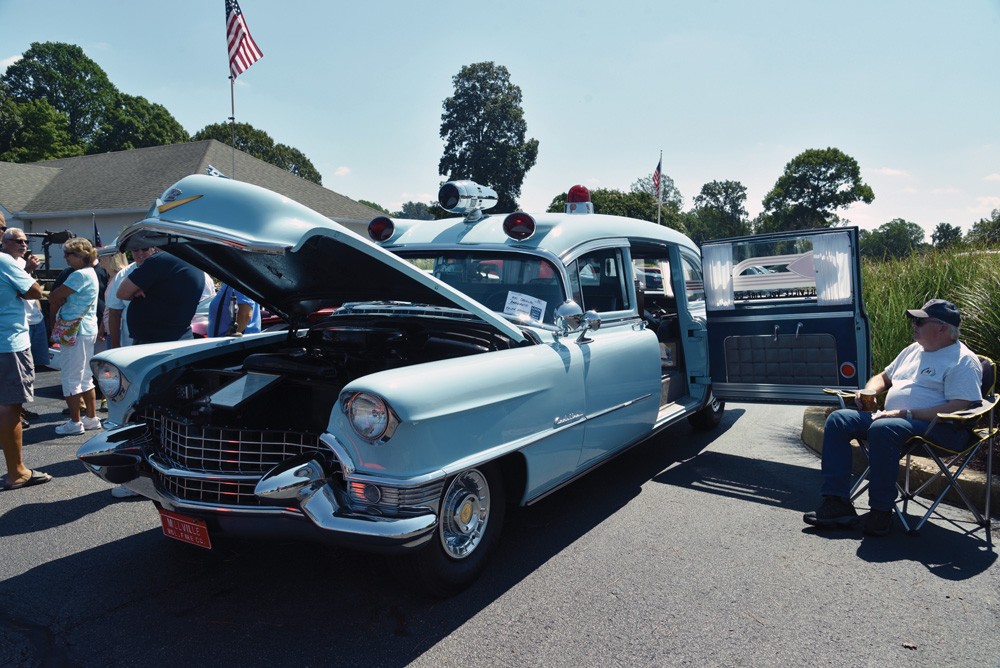 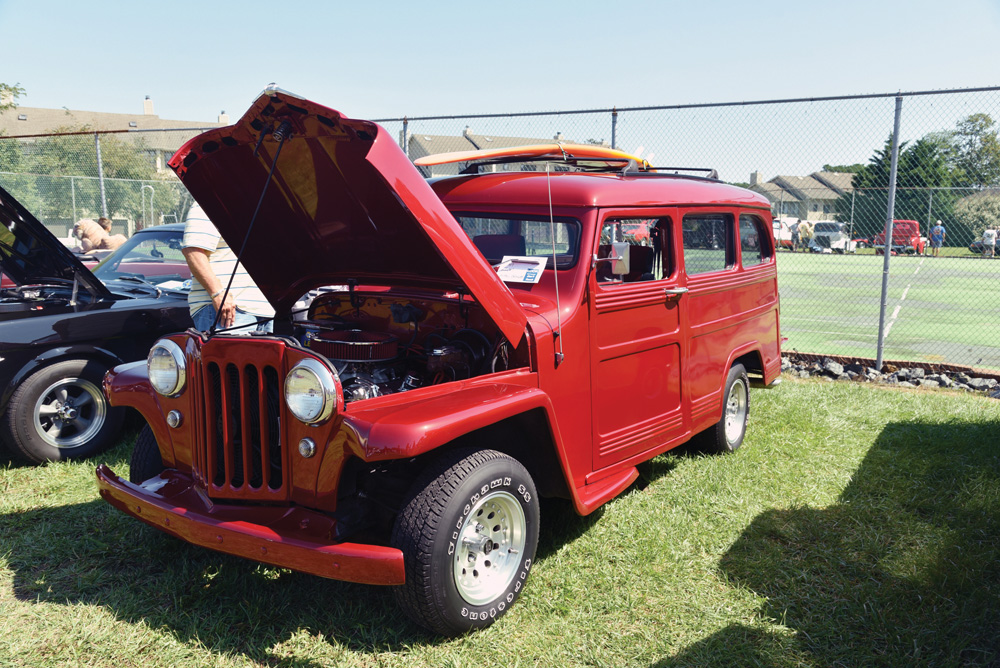 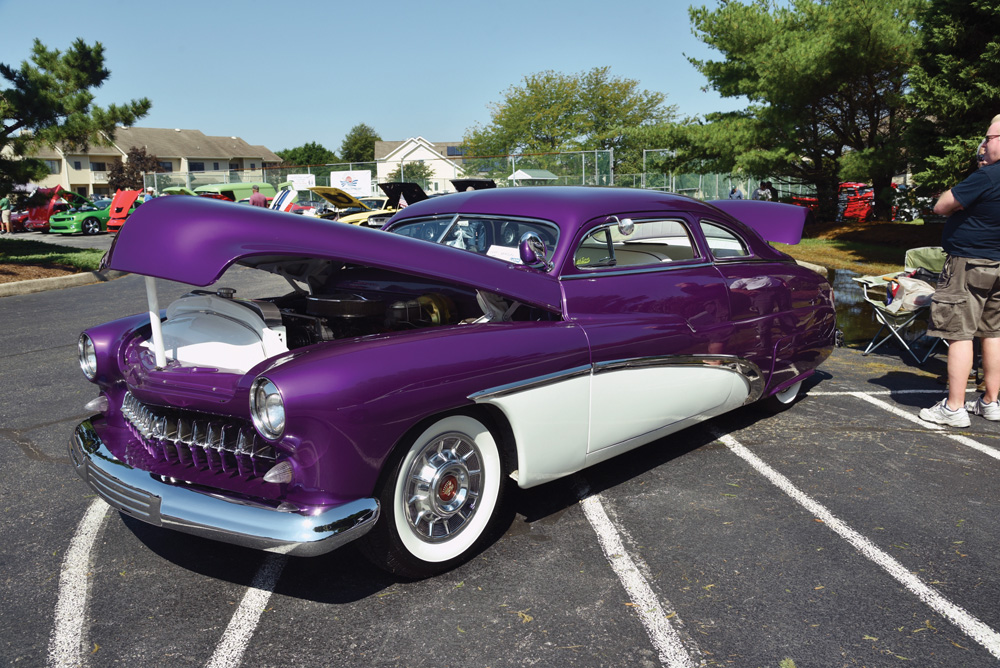 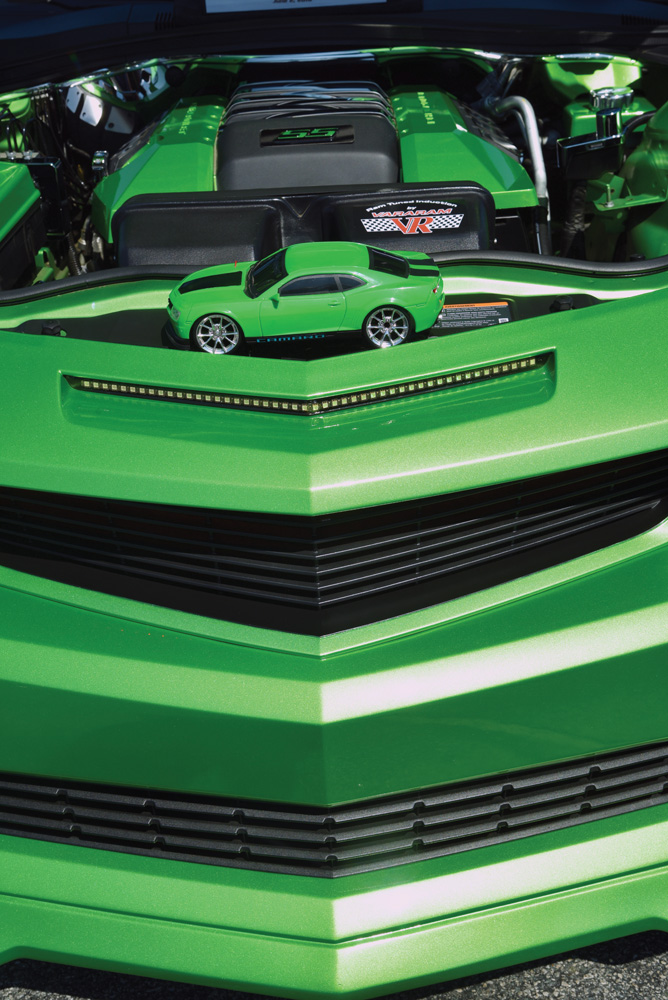 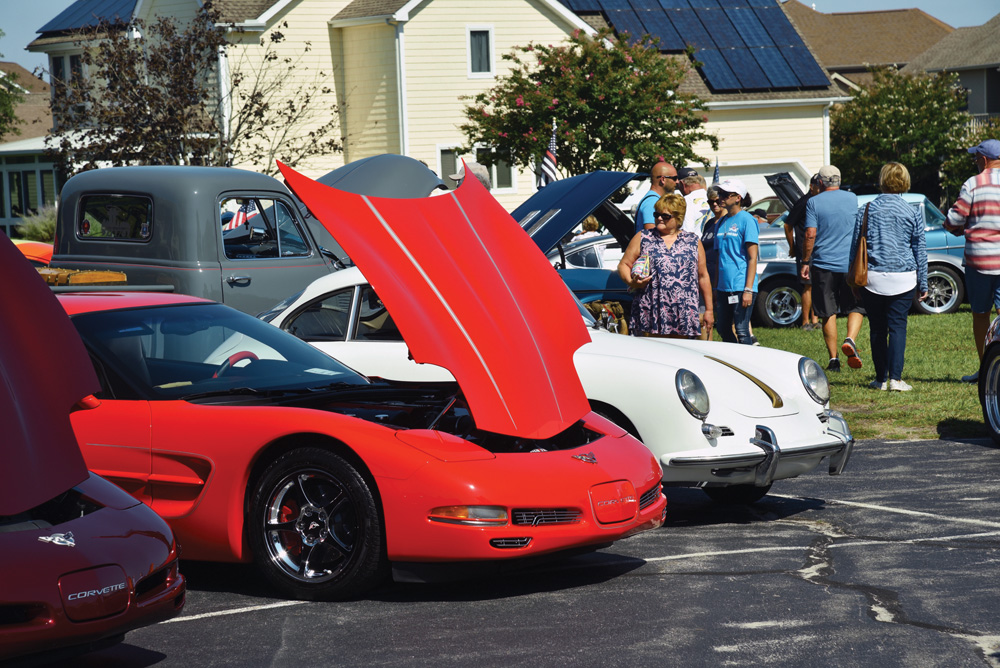 It’s about 11 miles from the Marketplace at Sea Colony to the Bayside community west of Fenwick Island. The trip takes about 15 to 30 minutes, depending on traffic.

On Friday, Sept. 6, starting around 4:45 p.m., in blustery, damp weather thanks to Hurricane Dorian moving up the coast, a trio of buses made the trip between those two places.

On the buses that day were wounded military veterans, guests in Bethany Beach last week for Operation SEAs the Day’s Warrior Family Beach Week. Some, designated “Very Important Families,” were first-timers. Others were “Alumni Families” who have experienced Warrior Beach Week before and were on hand as mentors to the VIFs.

The bus ride might not be long, dubbed the Heroes Welcome Home but its significance to those families is huge. For many, though they might have been home from their deployments for years, it’s the first time they’ve been welcomed, much less celebrated, by a supportive community.

As they all settle themselves into the green vinyl seats, Operation SEAs the Day volunteer Tom Renda bounds onto the bus and gives them a short summary of what to expect: basically, lots of people cheering and waving flags.

“If you have any questions, I’m here to answer them,” he says while he hands out small American flags to each passenger.

Finally, with large Operation SEAs the Day banners tied to the sides of each bus as best they can be against the wind, the buses do a quick loop through the Marketplace parking lot and head south on Route 1. Leading the way are about a dozen emergency vehicles, horns and sirens blaring, a Delaware State Police motorcycle escort and several “pace cars.”

When the first group of flag-waving spectators along the route are spotted, the chatter on the bus gets a bit more animated.

The motorcade makes its way through South Bethany and Fenwick Island and state park lands in between. Pockets of supporters along the way wave flags of various sizes, waving at the buses. On the ocean side, one home’s deck is full from end to end with people waving flags.

In Fenwick Island, a uniformed police officer salutes from the edge of another group of flag-waving spectators.

As the parade makes the turn onto Route 54, one woman wipes tears from her face. Her companion, wearing dark sunglasses, has been sitting, hands folded in his lap, not speaking, for most of the trip.

Some of the other passengers, at this point, are chatting, laughing, waving flags out the bus windows, taking photos with their cell phones. Others are quieter, checking their cell phones and watching the groups of supporters as the buses pass them.

At Fenwick Hardware, manager Steve Lehukey stands with a flag in one hand, taking photos of the passing parade with his cell phone in the other hand. Large flags, attached to a fence, form up in a flowing red, white and blue line in front of the store.

Renda gives the group a heads-up that they are nearing their destination, the Bayside community west of Fenwick Island. There was to be a mounted escort and bagpipers at the entrance, but they had to be canceled due to the stormy weather forecast. Also canceled was a Bruce in the USA concert set for the Freeman Stage, at which the families were to be special guests.

None of that seems to matter as the buses get their own rockstar treatment, rolling by the most concentrated crowds of the trip, who are wildly waving and cheering. There’s even some cowbell.

As they pull into the parking lot at The Cove restaurant, dozens of Operation SEAs the Day volunteers greet them with smiles and hugs, directing them into the restaurant.

Inside, the restaurant is festooned with bright, shiny balloons; flags from each branch of the military hang from the ceiling.

Following the national anthem and the presentation of colors by the Delaware State Police color guard, Joshua M. Freeman Foundation Chairman Michelle Freeman told the crowd of families and volunteers that her late husband, Josh, the foundation’s namesake, was a Green Beret.

“He would tell you,” she said, “that his military friends were the best people he’d ever met.” When the foundation was asked to partner with Operation SEAs the Day, Freeman said, “We said ‘absolutely.’ It was a no-brainer.” Speaking to the veterans and their families, she said, “There are a lot of people right here who are deeply grateful” for their service.

Sitting at one of the tables in The Cove was the Bolish family — James and Jennifer and their three boys, Micah, 9; Eli, 8; and Isaiah, 4.

James Bolish has served in the Army in both Iraq and Afghanistan. It was a stateside machine-gun accident, however, that resulted in the amputation of his right leg in 2018.

Five months after his leg was amputated, he and his family first came to Bethany Beach as a VIF. This year, they returned as “alumni,” serving mentors to the VIFs.

Reflecting on his family’s journey to Bethany Beach last year, James Bolish said it, most importantly, “got us away from everything” — the endless doctor appointments and all the stress related to his injury and recovery.

“Just to relax,” he said, was the most valuable part of the week for him and his family. “I’ve never seen such support” from a community, Jennifer Bolish said. “Every time I come, I cry at least once or twice,” she said.

For her children, Jennifer Bolish said, the Warrior Family Beach week “let them experience things we’ve never experienced,” such as taking a boat ride and touching a horseshoe crab.

“The boat was a little bumpy,” Micah Bolish recalled.

Asked what the week meant to his family, the 9-year-old didn’t hesitate: “My mom and my dad are getting support. It’s helping my dad get better.”

“And they’re not working,” he said, which got a chuckle from his parents.