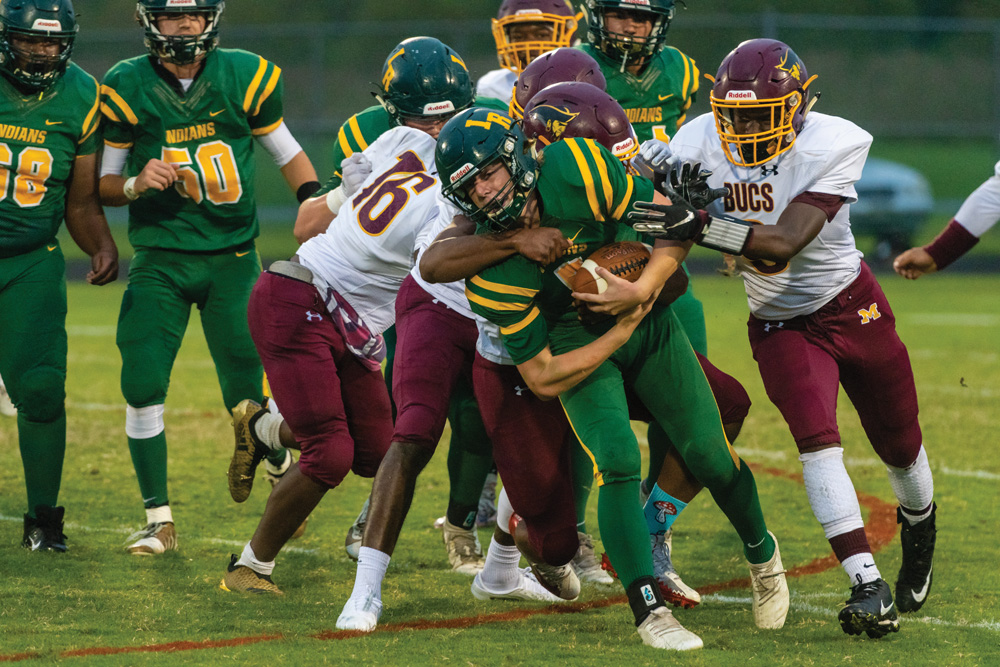 Indians drop a close one to Polytech

The Indian River High School football team made the trek north to Dover to take on Polytech last Friday, Sept. 13, only to find themselves on the short end of a 14-13 final score.

With the full moon beaming over the field, the Indians literally won all facets of the game except where it mattered most in the end — the scoreboard. The IR defense limited Poly to just 125 yards of total offense, while forcing six Panther turnovers.

“I think a lot of our troubles are that we have young guys playing in key positions,” head coach Phil Townsend said after the game. “I know [quarterback] Reece [Stone] got hurt tonight, and we had to bring in a freshman in Hayden [Hall]. Now, Hayden did a great job, but there were probably 10 plays tonight that he went the wrong way, turned the wrong way, didn’t get the ball to the right guy, or maybe called the wrong formation.

As Townsend alluded to, the Indians had their fair share of mistakes throughout the game, with three fumbles and a snap over the punter’s head, with the biggest of the turnovers coming after Jodiah Morris picked up a Poly fumble around the 22-yard line, and scampered down toward the end zone for what many thought was a surefire touchdown.

However, a Poly player chased him down, and punched the ball out from behind and into the end zone for a touchback.

“You can’t even make this up down here,” Townsend said, pointing, toward the end zone to which Morris was heading. The referees, he said, “didn’t call it initially, and were late to calling it. We weren’t sure what was going on there. I was confused myself.”

That sequence could have potentially put the Indians up 14-0 midway through the third quarter.

Poly, however, took advantage of the situation, going 80 yards to tie the score and flip the momentum in the game back in their favor. The Panthers added another score, to take the 14-7 lead.

Dalton Hall, who finished with a game-high 138 yards on the ground, brought the Indians back to within one, at 14-13, on a 1-yard run through the right side. On the point-after try, IR went for two, and Dalton Hall came up short of the goal line with 2:22 left to play in the game.

The Indians finished the night with 193 yards of total offense. Hayden Hall completed 4 of 7 passes for 26 yards in his first extended action under center. He will be the guy going forward, as Stone is likely lost for the season due to the injury.

“We have to correct the little mistakes,” Townsend concluded. “Our defense has played great. We were this close to getting a ‘W,’ and I was hoping we were going to get that here. Overall, these kids got to keep their heads high. We played tough, we played together as a team. We just haven’t had any luck yet.”

The Indians will be home for the next two weeks, starting with a game against A.I. DuPont this Friday, Sept. 20. The Tigers come to town with a 1-1 record following last week’s 14-6 win over Christiana. They lost 37-13 to Wilmington Friends to open the season.