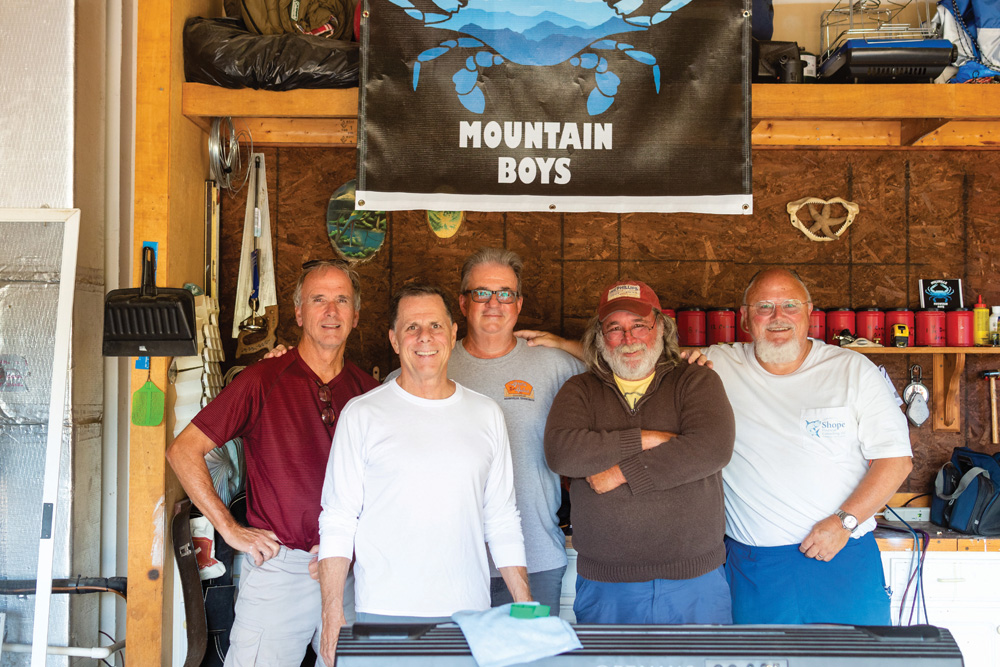 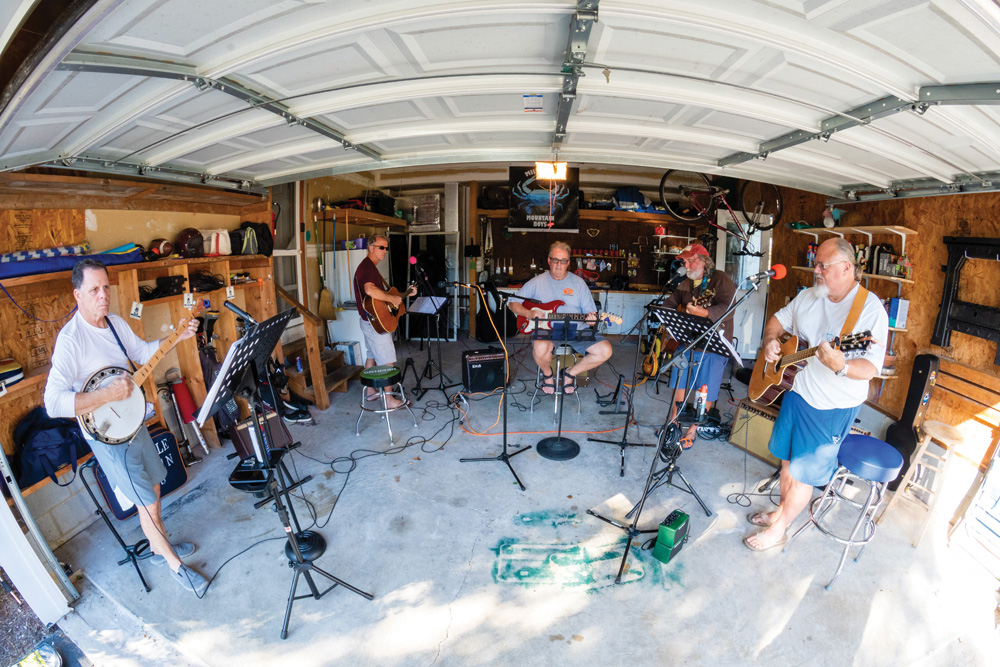 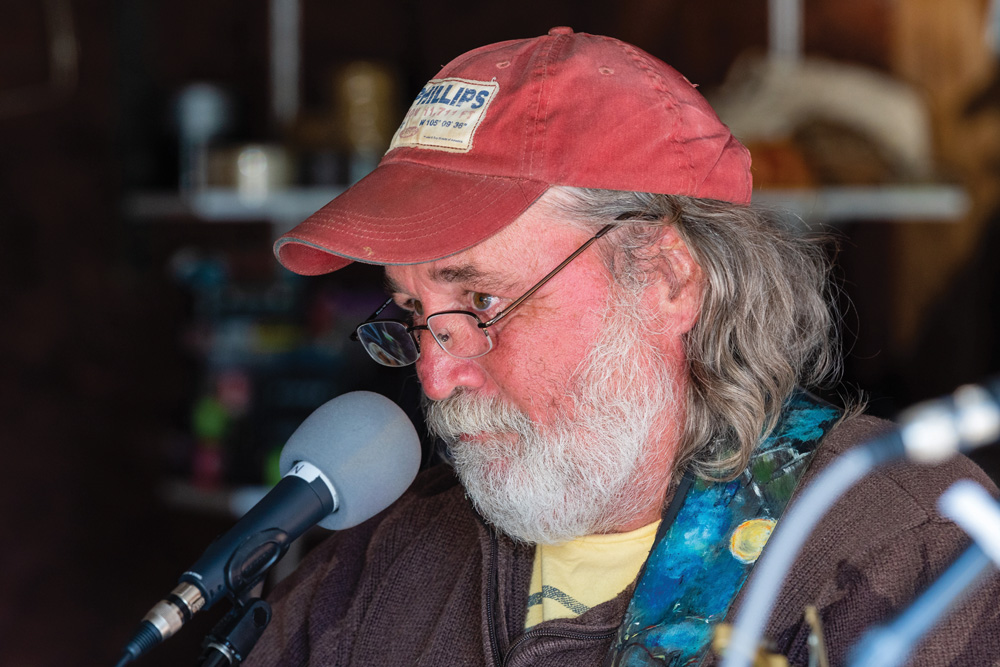 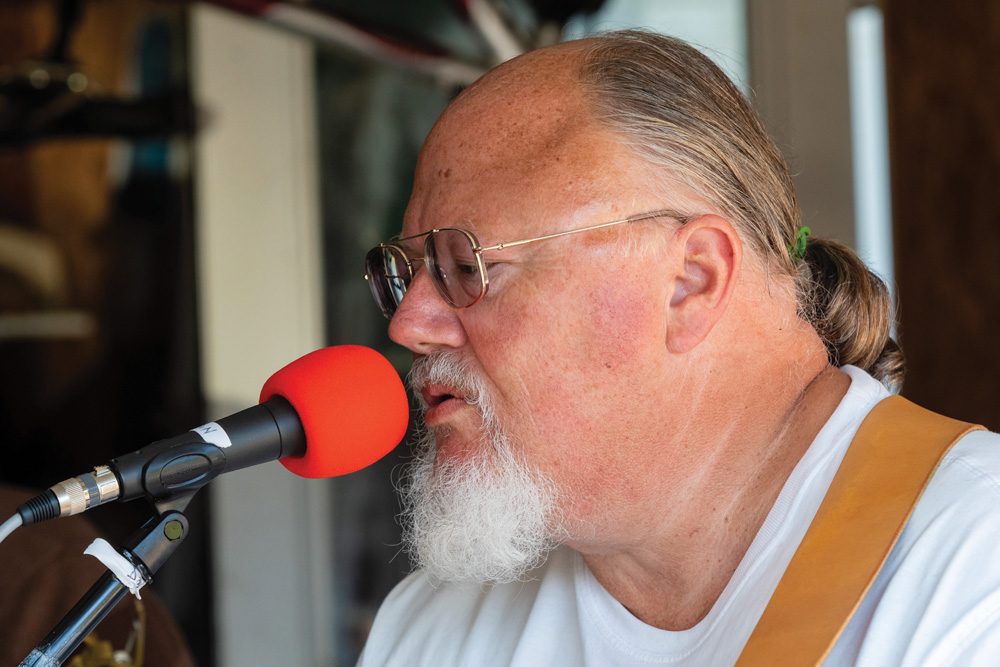 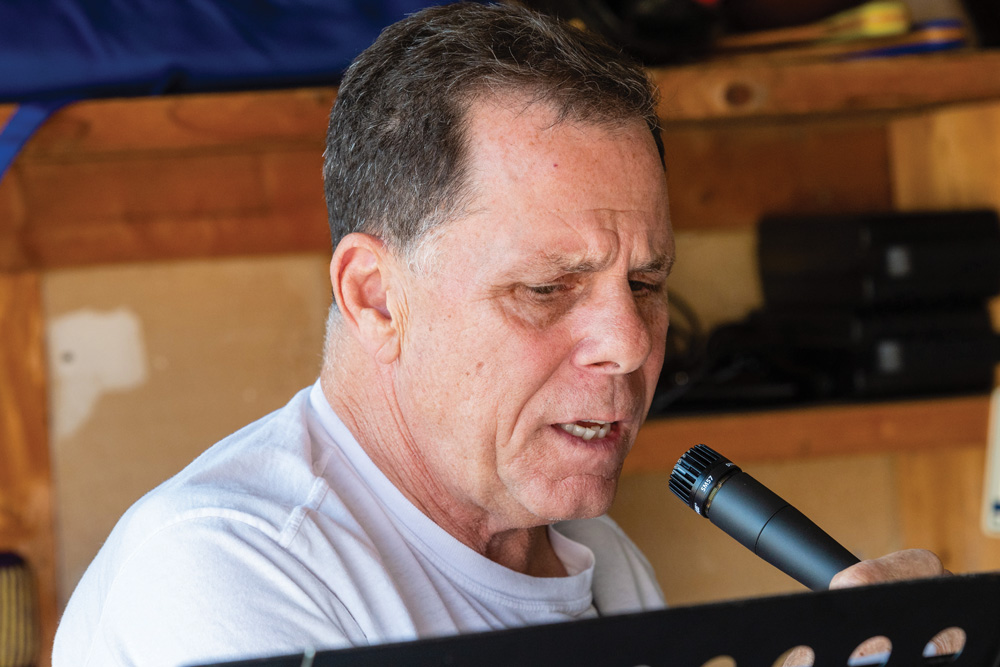 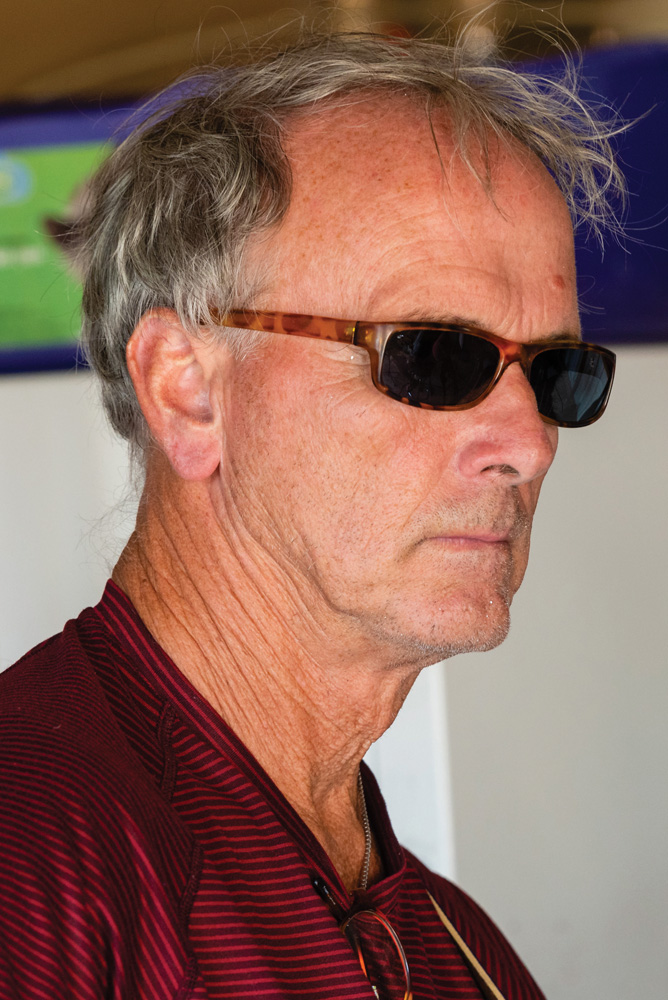 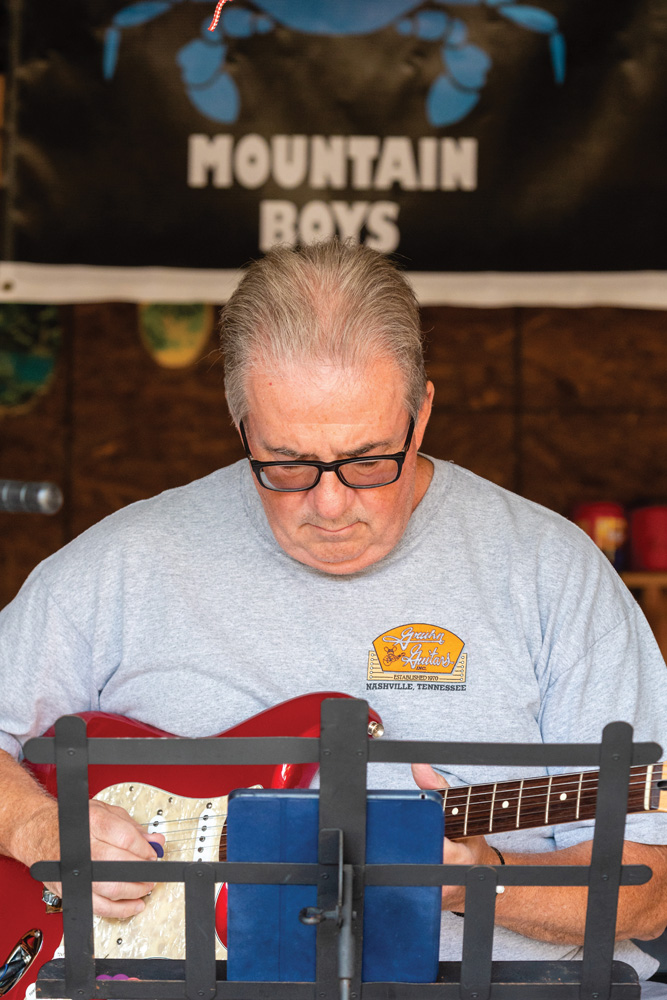 When Bob Barber talked about being a member of the band Millville Mountain Boys, it was with a kind of gentlemanly gratefulness.

“I can’t stop smiling when I’m there. It’s so relaxing,” he told the Coastal Point shortly before he died, suddenly and unexpectedly, on Thursday, Aug. 22, shocking fellow band members, who held him in high regard.

“It’s fun to be with people my own age. We’re guys, so you can imagine the stories that go on and all that stuff. It’s hilarious that way. Once in a while, the guys have a little beer or something. I don’t. It’s kind of funny, as time goes on, they have more beers.

“It’s a good outlet. It’s just therapeutic, because we have each other. It’s been a whole lot of fun for us,” said Barber, who said he looked forward to rehearsals on Tuesday and Thursday evenings.

His goal was “to sing songs to my grandkids.”

“As it turned out, they asked me to join them and be in the band. I took lessons at first, then I taught myself. Now when I want to learn a song, I teach myself. I always wanted to sing to my grandchildren and play for them, but I didn’t have an instrument, then the guys convinced me to play with them,” Barber said.

He is survived by six grandchildren, with a seventh expected. They are Evan, Lily, Aubrey, Elizabeth, Caroline and Samuel. His wife, Deb, also survives him, as well as two sons, Matthew and his wife, Brittany, of Collegeville, Pa., and Aaron and his wife, Jenna, of Middletown, Del.

Barber, who died at age 66, will be honored at a memorial service on Saturday, Sept. 21, at 7 p.m. at the Bethany Bay Community Center. Fellow musicians will play a few songs in his honor, said band member Don Shope.

“Bob was a kind and thoughtful person, and will be so missed. The only thing Bob wanted was to be able to contribute to the band. He was such great guy,” said a grieving Dave Baldo, who started the Millville Mountain Boys.

Barber, in his modest way, credited the band members for helping him.

“We all get along very well. I’m so happy to be there. It’s like a music theory class. Because the other guys, Brad and Charlie and Terry, they want to make me do better. They want us novices to do better and they help us along. They are very patient. So we learn simple songs, then more complicated songs,” Barber said.

“Dave is a banjo player, so we look for songs with banjo in them. For me, I like the slow songs. I sing some of the slow songs like ‘Angel from Montgomery’ — you know, John Prine. The new one we’re learning is called ‘Tennessee Whiskey.’ Charlie, he loves playing the blues, so we accommodate him and learn songs that have blues in them,” he said.

Carr called Barber “the heart and soul of the band.”

“He put the band first. Someone might have something, a difference of opinion, about a song, and he always deferred to the band. He was a great guy. He had a big heart. I’m 66 and in reasonably good health, but he was not. He struggled just to get from his car to the garage to sit and play, but he never complained. A lot of obstacles were in his way, but he didn’t complain,” Carr said.

Baldo and Barber became friends about six years ago.

“Bob was an owner and a board member in a community where I was the property manager. Bob and I connected immediately because of our similar backgrounds in the building industry. Bob would eagerly research a problem, and provide professional advice and guidance back to the community.

“Bob and I became closer friends after he joined the Millville Mountain Boys. Like Don and myself — we’re late bloomers when it came to music. Don decided to learn how to play the guitar when he was about 57. I started playing the banjo at 62, and Bob also took up the guitar at about 62,” Baldo said.

“Bob loved playing in the band, and he took it very seriously. He was always the first member to practice. He would also go to Holts Landing State Park and sit on the picnic tables and practice by himself.

“He always wanted to prepare. He would get upset with the other band members if they wanted to introduce a new song to play that was not familiar to him.

“Bob’s eyesight wasn’t the best,” Baldo recalled. “He would come to practice with a binder full of enlarged music sheets. He was so proud of his binder because on the cover it had ‘MMB’ — Millville Mountain Boys. He would place his binder on his music stand and illuminate it with a bright shop light, the kind of portable light you would use in a workshop. I can remember one night we were practicing, and I looked in Bob’s direction and looked directly into the shop light,” Baldo said, remembering cussing in a lighthearted way and saying, “Bob, you’re blinding me with that light.”

Carr, three years later, is still amused that he went from being at a New Year’s Eve party he couldn’t wait to leave, to becoming a member of the Millville Mountain Boys.

“I met the band members at this party in Bethany Bay. I was at a New Year’s Eve party with a bunch of strangers, and I didn’t have much of a feel. We had met a couple at a health club, and they said they were having a New Year’s Eve party and they would love for us to come. I was wondering how much longer we were going to have to stay.

“These guys said, ‘See you Tuesday.’ I’m nervous, and I go home and say, ‘I’ve got to start practicing,’” said Carr, who regularly goes to rehearsals.

The accidental band founder, Baldo laughed when he talked about the band’s origin.

“We bought a plastic kazoo. I bought a banjo, and my friend Ernie Bailey and I stumbled our way through playing ‘She’ll Be Coming ’Round the Mountain.’ The party went great, and another guy told me if I wanted to learn how to play the banjo, he would learn how to play guitar. This other friend and I, we started practicing. You can learn anything on YouTube. Anything at all.

“We started practicing. That was three years ago, and we have not missed a Tuesday or Thursday in three and one-half years. Now the band has grown,” he said.

The band members are in their 60s, with all of them retired except Baldo, who owns a property management company.

“We play mostly at community functions, pool parties, private parties or groups. We play an array. We play ‘Wagon Wheel,’ ‘Take Me Home, Country Roads.’ We don’t fall into a specific genre,” he said.

“We haven’t played at any bars, but we definitely plan to play at local restaurants. Most importantly, we love it. We really love it.”