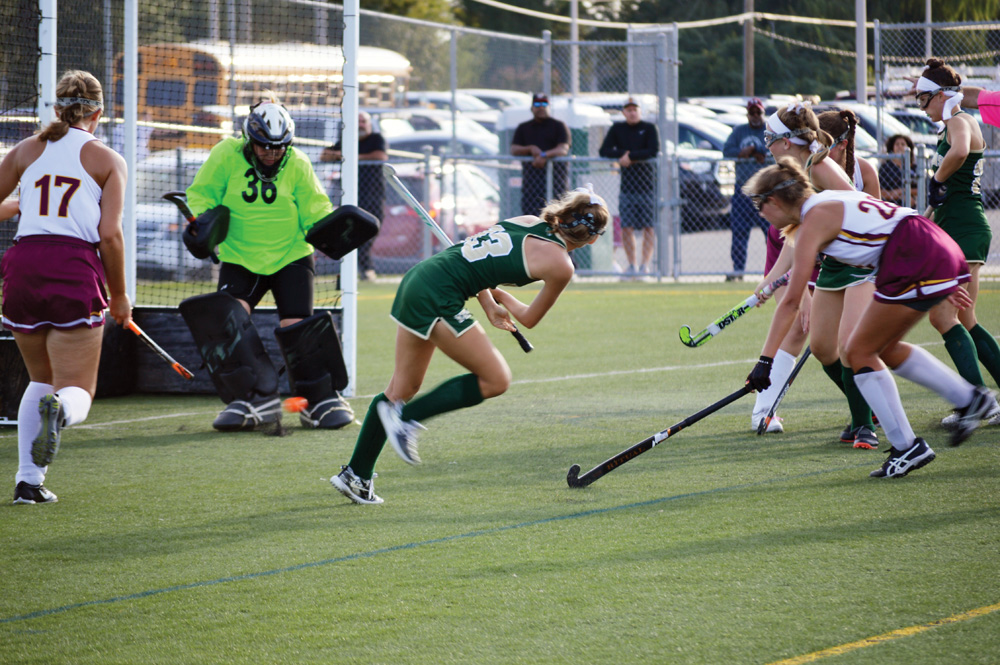 Indians pick up pair of OT wins to stay unbeaten

The mark of a winning program is finding ways to win when facing adversity. The Indian River High School field hockey program has figured out a way to do just that in several instances this season thus far, and especially in their two most recent wins this past week.

The Indians found themselves down 1-0 late in their Thursday, Sept. 19, game against Division I rival Sussex Tech, only to tie the score before regulation expired and then win the game 2-1 in overtime.

Most recently, on Tuesday, Sept. 24, the Indians saw their early 2-0 lead diminish following a pair of goals by Milford before battling for a 3-2 overtime win.

“Both teams were certainly tired after playing 60 minutes on the field,” said IRHS head coach Jodi Stone. “The idea is to put your best seven out on the field. It’s sudden death or 60 minutes to see who can score first. You try to do basics and big ball, and try to get it in the goal. You hope that everything goes your way. It’s pretty much a battle of the fittest — whoever is the more conditioned, better-fit, better-skilled team, usually comes out on top.”

The wins improved the Indians to 6-0 on the season, which has helped them climb amongst some of the best Division II programs in the state in some unofficial rankings as of press time.

In their most recent win over the Bucs, IR got on the board at 19:48, when Kayler Townsend took a pass from Jessica Rybicki and buried her shot into the back of the cage for the 1-0 lead. Just 27 seconds later, Avery Congleton made it 2-0 when she slid her shot past Milford goalie Eve Sekscinski. Rylie Cordrey was credited with the assist on the Congleton goal.

Following the second IR goal, Milford took a timeout and proceeded to come out with a different look offensively. That led to two goals that tied the score at 2-2 before the halftime intermission.

The score remained that way through 30 minutes of the second half, leading the teams into the 7-on-7 overtime period.

Both teams had several opportunities to win the game with penalty corner chances, but neither was able to convert until…

Townsend slammed home the game-winner with just 1:29 remaining in the extra frame on a feed from Brynn McCabe to keep the Indians perfect.

The two goals by Townsend give her a team-leading eight now for the season. Congleton’s goal runs her season total to seven. Cordrey leads the way with six assists. The three of them always seem to be in the right place at the right time for the IR offense.

“They are the triplets,” said Stone. “They’re quick with great skill sets. They complement each other, and they just kind of know where each other are at any given time. It’s a great feeling. They’ve worked really hard to get that bond on the field, as well as off, and it’s really starting to come through for us.”

In the win over Sussex Tech, IR found themselves in a 1-0 hole after the first 30 minutes of play. Following the halftime break, the Indians needed just over a minute to tie the score when Jessica Rybicki found pay dirt on a goal off a pass from Cordrey.

Neither team was able to convert multiple chances to win the game in the second half, and overtime was needed to decide the winner.

Cordrey again was in a giving mood in the extra time. She found Congleton with a pass that was smacked through the goal mouth for the winner just 1:32 into overtime.