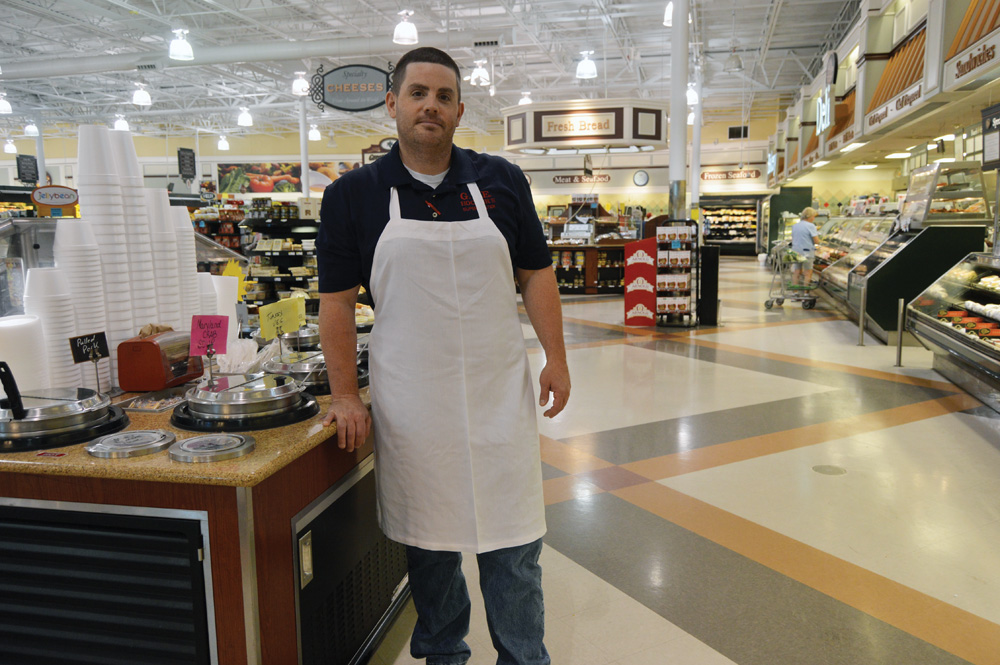 With temperatures starting their slow slide toward freezing, there’s usually a shift in eating patterns as well — toward warm, filling meals that simmer on the stove or bake in the oven for hours.

Good — because the crew of cooks at Hocker’s grocery stores stands ready to meet the needs of hungry patrons.

On a recent day, right around noon, the soup tureens at Hockers’ Salt Pond store drew a crowd. Men in plaster-splattered Carhartts, and women in heels and dresses gathered to fill their Styrofoam cups with Maryland crab soup, ham-and-bean, turkey noodle or chili.

“The ham-and-bean is great,” says one of the men. “Just like my grandma’s.” The conversation quickly turns to the Maryland crab, which always occupies the far-left spot on the soup counter.

“Gotta have the crab soup,” another man says.

That one soup, according to Ryan Parrill — who supervises Hocker’s soups and prepared foods — accounts for most of the stores’ soup sales. In the summer, Parrill said, just the Salt Pond store sells 10 to 15 gallons of it, per day.

“Some people freeze it and take it to Florida with them,” he said. In the off-season, the store sells about 5 gallons of the spicy crab soup, resplendent with plenty of crab and big hunks of vegetables, including corn, tomatoes and cabbage.

Crab soup, as well as other types, are available at the Salt Pond location, as well as the Hocker’s Dairy Mart in Clarksville.

“We try to keep it simple and affordable,” he said.

Anyone at Hocker’s will tell you that at the Salt Pond store, Dennis Lynch is the “soup guy.” He is the man behind the crab soup.

“I believe it was his mother’s recipe,” Parrill said. Lynch himself declined to be interviewed, letting his soup speak for itself.

Besides Lynch, Parrill and Charlie Pochepko II fill the soup pots each day with a rotating smorgasbord of flavors. There are about 10 or 12 different types, ranging from hearty vegetable-beef to rich oyster “stew,” which is really a creamy soup dotted with briny shellfish.

For many of the soups, Parrill said, there’s really no recipe.

“We just know,” he said. Sometimes, a variation finds its way into the pot. “It depends on how we’re feeling that day,” he said, as well as what fresh ingredients are available at a given time.

“Every morning, we come in and make the soups,” he said.

For Parrill, who started his cooking career in restaurants, that’s a nice change from the life of nights working in busy kitchens.

“I had to get out of the restaurant business, with the crazy hours,” he said.

He added that he also doesn’t miss the constant need to keep up with the latest trends in restaurant food. “This is a little simpler,” he said.

The “keep it simple” mantra applies to all of Hocker’s prepared foods, Parrill said, adding that the store’s offerings have greatly expanded under the management of Greg Hocker, who developed recipes for many of Hocker’s favorites, including barbecue specialties.

A native of Hanover, Pa., Parrill moved to Delaware to help his uncle, Steve Parrill, with his restaurant, the Fat Tuna, which was located in Millville. His kitchen skills were honed as the son of a single mother, he said.

“I had to learn how to cook and take care of myself,” he said. He added that he picked up his cooking chops from both his mother and his grandmother over the years.

A veteran of the U.S. Army, Parrill spend time in South Korea as a military police officer. He said one of his favorite parts of his time there was when the members of the Korean military who worked with the U.S. soldiers would take them out to various eateries.

As for his own “philosophy” of cooking, Parrill said, “I just think you should make things that make you happy, and that make other people happy as well.”