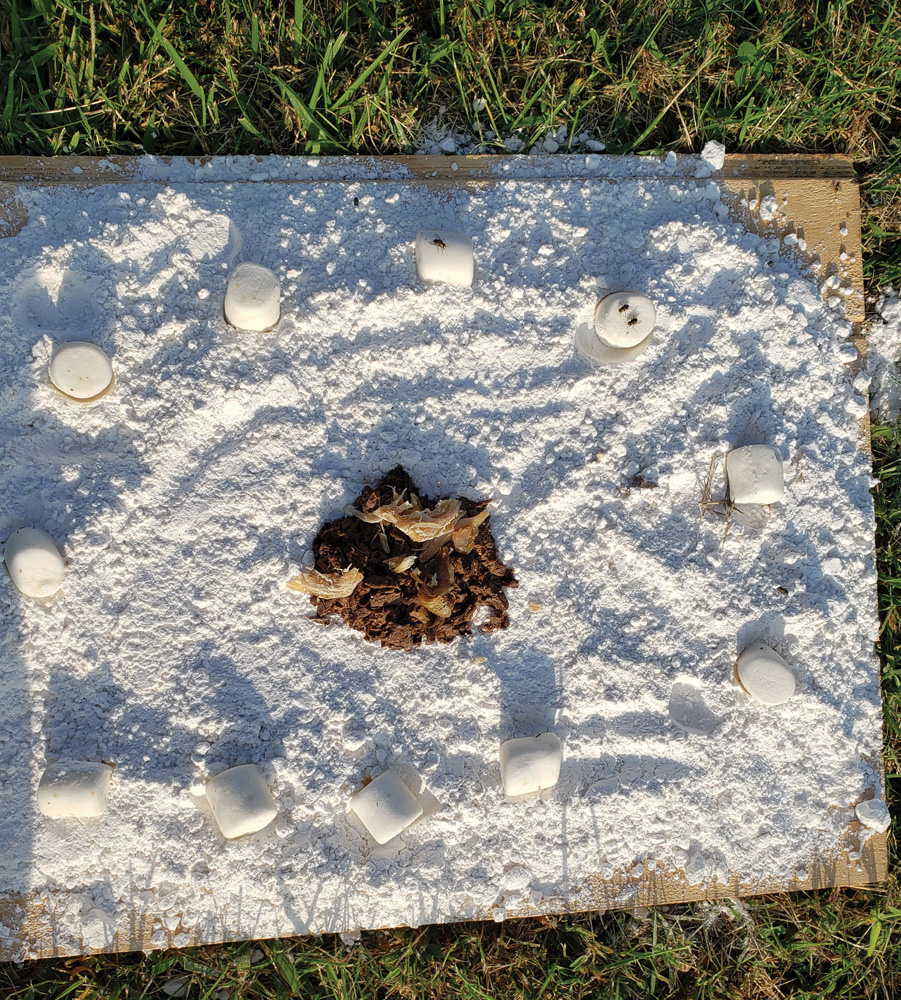 When Ace darted out of his owner’s house on Sunday, Sept. 22, his owner was concerned. But the 5-year-old 100-pound yellow Labrador retriever had run off before, then returned in an hour or so.

But when days went by, and Ace — who owner George Elliott has had since he was an 8-week-old puppy — didn’t come back, Elliott hired a professional dog tracker to learn tips for attracting wayward canines.

It was suggested that he pour flour on a piece of plywood so there would be paw tracks if the dog walked through it, and add his favorite treats on top. Ace loves marshmallows, so Elliott dutifully sprinkled them on the flour, and situated four or so of the boards along Cedar Neck Road, near his home.

“There are many of us wondering what these lures or poison or something along Cedar Neck are — who is placing them on the ground along the road; what is their purpose; are they poison? They look like a square of plywood with some type of white powder layered on top with marshmallows on top of the powder. I saw four of them along the road tonight as I was driving home. They are approximately 2 feet by 2 feet and lie flat on the ground,” she wrote in an e-mail over the weekend.

“It would be great to know their purpose, who is placing them and why, and very importantly if they are poison, since a lot of people walk their dogs along Cedar Neck Road,” she wrote.

The Coastal Point contacted the Delaware Department of Transportation and received a return call from Louise Holt in the DelDOT public relations department.

“I sent one of our trucks over there to look into this. A man lost his dog. He put those boards out to attract the dog, so he can get him back. They aren’t poison. There are signs posted near them, explaining the dog is lost and giving his phone number if anyone has seen the dog,” Holt said.

She called Elliott and told him the boards had raised concerns and that passersby were getting worried.

“He said he would remove them. He apologized. He was sorry if anyone thought it was poison. I understand his reason. I’d be upset if I lost my pet, too,” Holt said.

By late Monday afternoon, the boards had been removed, but Ace hadn’t returned.

“He is spoiled. He has a pool to swim in. He goes with me to work,” said a downcast Elliott, who owns Coastal Services and lives off Cedar Neck.

He’s offering a reward for the return of the dog, with a promise that he won’t ask any questions. He invested in a service that dials 500 numbers in the area, alerting area residents the dog is missing, and he started Twitter and Facebook accounts focusing on Ace. More than 12,000 people responded to the Facebook page, called Race to Find Ace, designed by Elliott’s fiancée, Nicole Peterdozzi.

Ace, who is unneutered, has a brown stripe on his nose.

“His tail is round at the end, as it was injured as a pup. He is extremely loveable and gentle. We are asking that everyone keep an eye out for Ace. … He could be anywhere, since he is also a swimmer,” Peterdozzi wrote on Facebook.

Concerned dog lovers commented by the scores and agreed to help search.

“Ace is so important to our family, and the unknown is killing us. It has placed a huge void in our family and our children keep asking if he has come back,” Elliott posted on Facebook on Thursday, Sept. 26.

“We are just praying that he is safe and being cared for. … If you are reading this and he jumped into a vehicle with you, please have the heart to bring him back to us.

“Ace is a very sweet dog and deserves to be back home.”