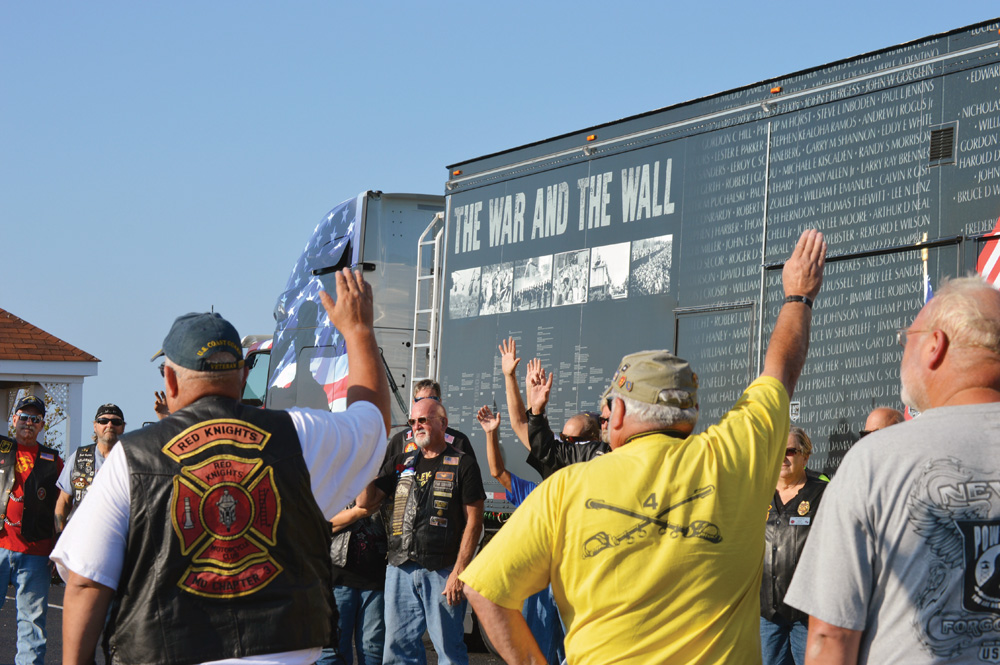 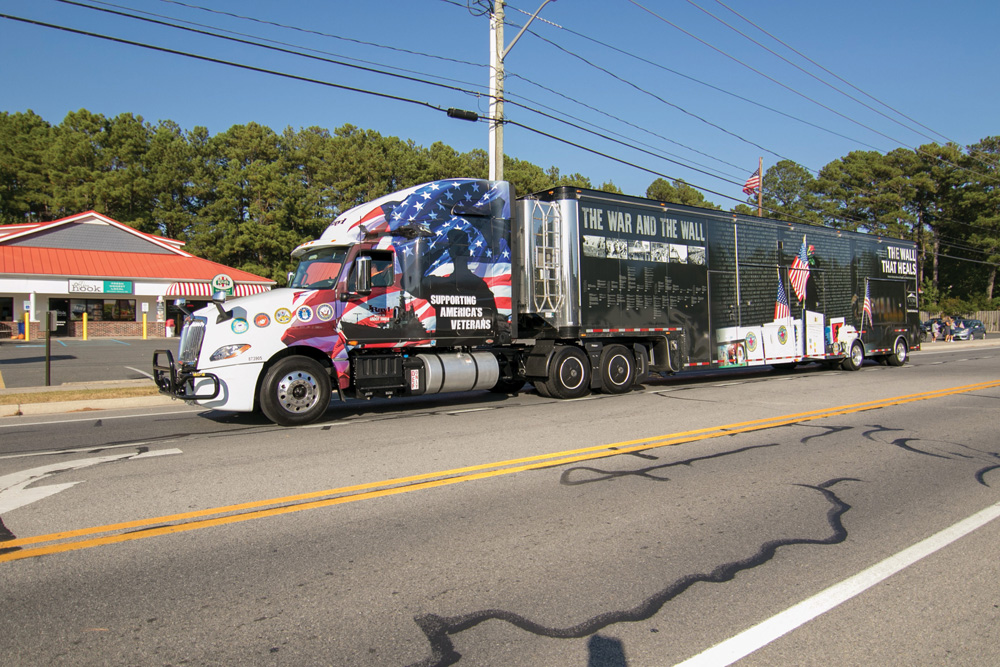 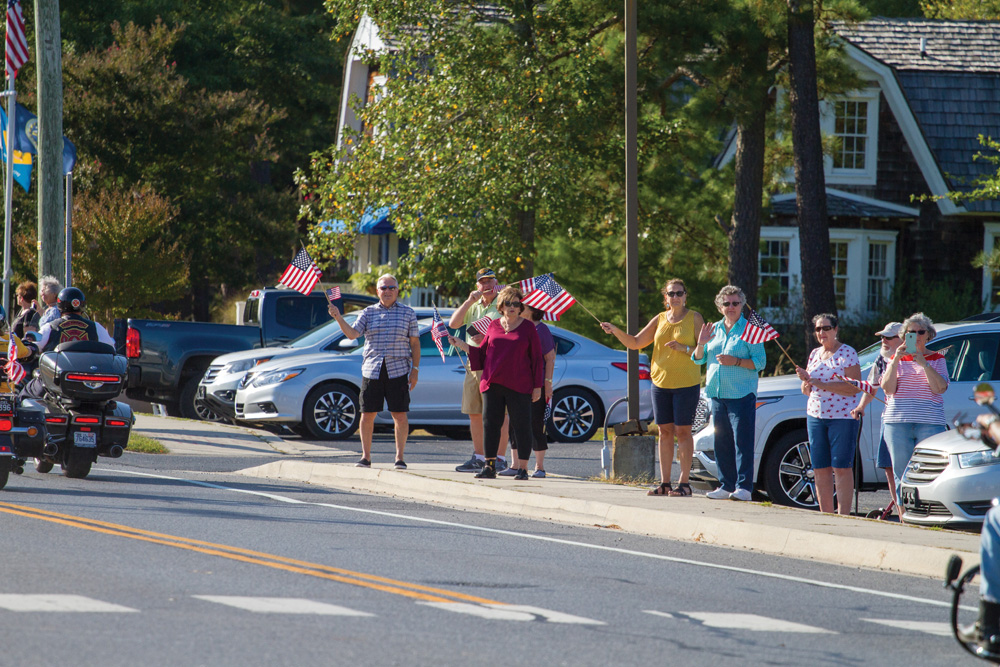 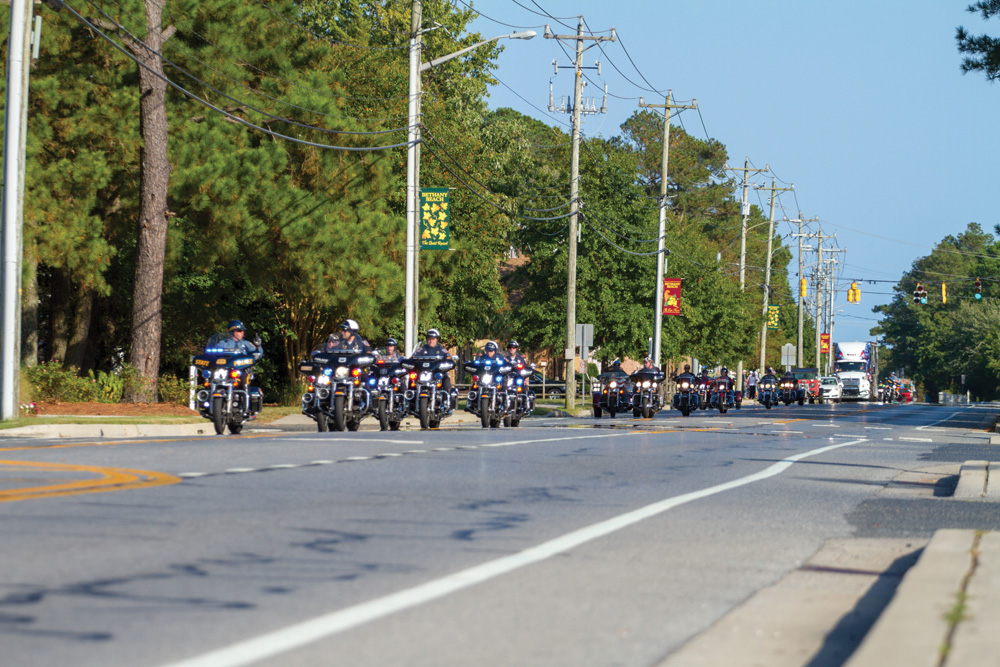 Around 4:30 p.m. on Tuesday, Oct. 1, shouts of “Here it comes!” rang out on Cedar Neck Road in Ocean View as flag-waving crowds craned their necks to see down the road.

First, an escort of law-enforcement officers on motorcycles, sirens blaring, made their way toward them. Then, a large truck roared by, its cab emblazoned with a flag and an eagle, as well as the insignias of all five branches of the U.S. military.

On the side of the truck were the words “The Wall That Heals.” Inside, not yet visible, were the parts of a traveling ¾-scale replica of the Vietnam War Memorial in Washington, D.C.

After the truck pulled in to Mason-Dixon Veterans of Foreign Wars (VFW) Post 7234 — its temporary home until Sunday, Oct. 6 — volunteers lifted side panels to reveal a mini-museum housing some of the 400,000 items that have been left at the memorial in the nation’s capital since it was opened in 1982. Like the original, the Wall That Heals bears the names of nearly 58,000 U.S. soldiers who died in the Vietnam War.

Also like the original, the Wall That Heals will be open to visitors non-stop while it is at the Ocean View post. It will be open from 4 p.m. Thursday. Oct. 3 to 2 p.m. Sunday, Oct. 6. A wreath ceremony will be held on Saturday, Oct. 5 at 11 a.m.

Getting the Wall to Ocean View has been a process that involved many members of the post, according to Fulton Loppatto, former commander of the post.

“To host the Wall for the community is a major financial and logistical undertaking,” Loppatto said. “This post has never attempted anything this large with this many people,” he said, adding that “it is worth it” to bring the Wall — particularly for those who might not be able to travel to Washington, D.C., to see the original.

The post received word that it had been chosen as a Wall That Heals site nearly a year ago, Loppatto said, and he and two other steering-committee members, Dean Levering and Mark Daughaday, as well as seven sub-committee chairs, quickly began to plan for its arrival. More than 50 post members were involved in planning for the Wall’s visit, and more than 500 people will be involved in the week’s events while the Wall is at the post.

Loppatto said he hopes the Wall will be a restorative experience for the more than 1,000 Vietnam veterans in the area.

“This is about healing,” he said, “especially for those who lost family members, friends and fellow soldiers in the Vietnam War.

“It will be also very emotional for the Vietnam veterans who served in-country,” Loppatto said, adding that he expects that “several will visit late at night, or maybe not at all.”

During the hours the public can visit the Wall — anytime, day or night, between 4 p.m. Thursday, Oct. 3, and 2 p.m. Sunday, Oct. 6 — “there will be lots of support individuals and fellow veterans to help them and their families through the process” of absorbing the impact of the Wall.

With its long, low “V” shape, the Wall was designed by then-college student Maya Lin to appear to be a gash in the ground, symbolizing the impact of the war on American society. She designed it in response to a contest, as a 21-year-old student at Yale University.

The 1982 contest was held 12 years after four Kent State University students were shot by members of the Ohio National Guard during an anti-war protest. Lin grew up about 130 miles from Kent, in Athens, Ohio, where her parents were professors at Ohio University.

Shortly after the Wall arrived at the post, against the backdrop of the post’s flagpole and the Indian River Inlet Bridge, veterans and their families gathered in a tight circle. Tim Tetz, director of outreach for the Vietnam War Memorial Fund, which sponsors the Wall That Heals, greeted them by asking Vietnam veterans to raise their hands.

“Welcome home,” Tetz said — words that many veterans of the Vietnam era never heard, because the war was so controversial.

While many of those lining the streets of Bethany Beach and Ocean View to greet the Wall were veterans, many were not. Most, however, were old enough to have had friends or relatives who served in the war.

Joyce and Debbie Liebert, seasonal residents of Bethany Beach, sat alongside Cedar Neck Road, decked out in red, white and blue and waving small flags in a crowd at the Salt Pond location of Hocker’s grocery store.

They were there in honor of Joyce Liebert’s son and Debbie Liebert’s brother, Bill Wilson. He served two terms in Vietnam, attending West Point between them, according to his mother, who said he was lucky to survive his tours.

“He got the Purple Heart,” she said, after having his radar equipment “shot off his back.”

“My mother went to Mass every day,” Joyce Liebert said. “She prayed him home.”

One couple brought with them to the gathering of flag wavers a picture of their son, who had left just a week prior for service in the Navy. Terry and Jim Long of Bethany Beach said their son, 22-year-old Seamus Long, attended Notre Dame through the ROTC and now begins his five-year term of service that ROTC requires.

“He went in with his eyes wide open,” Terry Long said. “We worry. We pray.”

Standing alongside the road with a flag tucked into his belt loop, Chuck Slagle of Millville had few words in answer to the question of why he attended the Wall’s arrival.