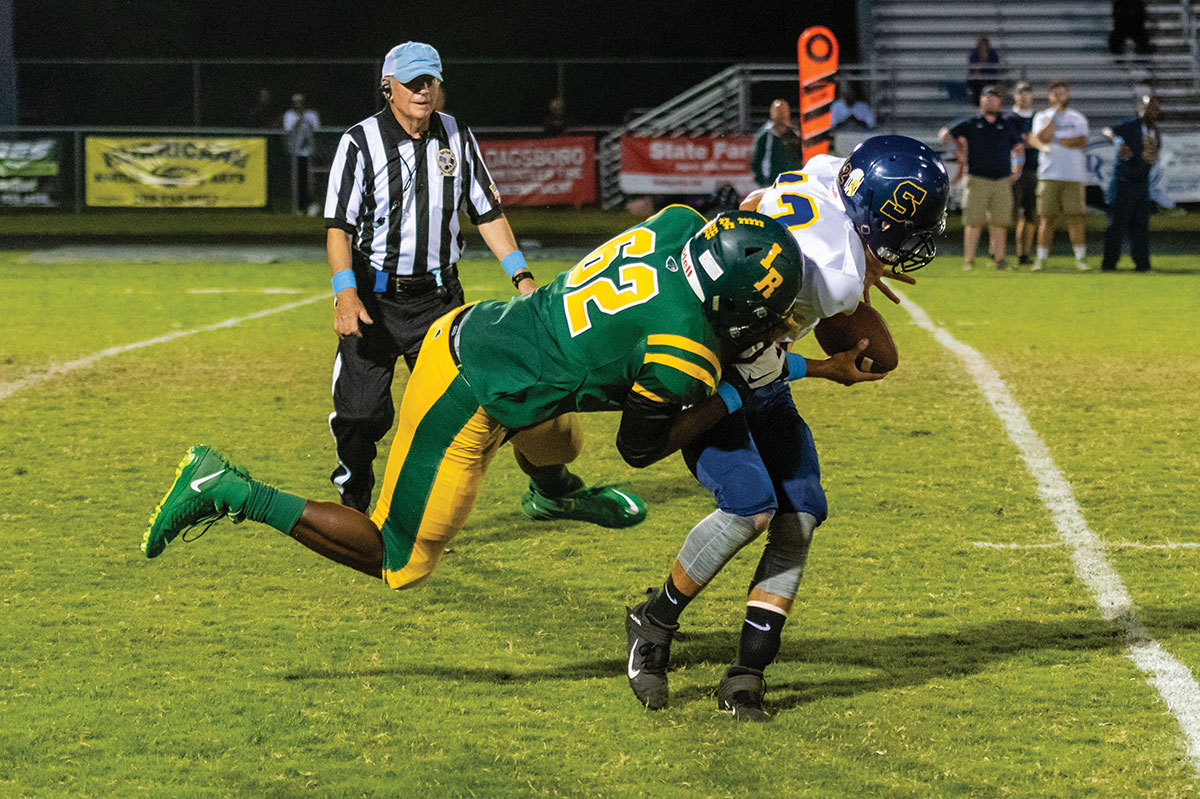 Indians cough up early lead in loss to Lake

Through the first 18 minutes of last Saturday’s Henlopen Conference South Division clash with host Lake Forest, the Indian River High School football team looked like they were going to play spoilers for the Spartans’ Homecoming festivities.

Following Dalton Hall’s 9-yard touchdown run with 6:51 left in the first half, Lake responded in a very big way, scoring three times before the halftime intermission, en route to 42 unanswered points, for a 49-14 win over the Indians.

Lake managed all their offense — 379 yards — on just 32 plays, with 321 of those yards coming on the ground. The biggest issues, though, for the Indians, were their turnovers and missed assignments on defense, which led to the big comeback for the Spartans.

“Offensively, we had too many turnovers,” IR head coach Phil Townsend said. “We only hurt ourselves by turning the ball over. We gave the defense bad field position at the end of the first half and in the second half. Defensively, we have to play assignment football. Everyone has to do their job, and, unfortunately, on some of Lake’s big runs we had one or two missed assignments. Those missed assignments led to touchdowns.”

The Indians ran nearly double the amount of plays as Lake (63-32), but those turnovers thwarted any opportunity to extend drives to keep the Spartans’ offense off the field. IR managed 285 yards of total offense, with 228 of those coming on the ground.

Dalton Hall picked up 68 stripes on 19 carries, with the one touchdown. Jalen Holland-Holloway led the Indians with 84 yards on just eight totes. He also contributed two catches for another 41 yards and a touchdown, which got the Indians on the board with just 10 seconds left in the first quarter.

“Jalen had another great game this week,” Townsend said of his junior running back. “He was selected as our ‘Tough Man of the Week Award.’ He is starting to recognize that hard work at practice rolls over to the game field. He has been focused at practice, and he likes the success. He has become a dual threat on offense. He can block, run on the perimeter and catch the ball. He will only continue to get better each week.”

Freshman quarterback Hayden Hall connected on 4 of 10 pass attempts, for 57 yards, with the touchdown, but also had three interceptions against a very tough Lake defense. His other two completions went to senior Nicholas Angelo, for 16 yards.

Next up for the Indians is a trip to Laurel for a Saturday-afternoon matinee against the Bulldogs, who, like Lake, will be celebrating their Homecoming as well. The Indians — now 1-4 on the season — will need to clean up their turnovers, as well as their penalties, if they want to get back in the win column.

“Laurel is a team that is on a two-game winning streak,” Townsend concluded. “They started out slow, but definitely are improving each week. I think it will be a close game, and whoever limits turnovers wins the game. We have to win the turnover ratio this week and get back to fundamentals. Laurel runs the triple option, and we need to play assignment football.”