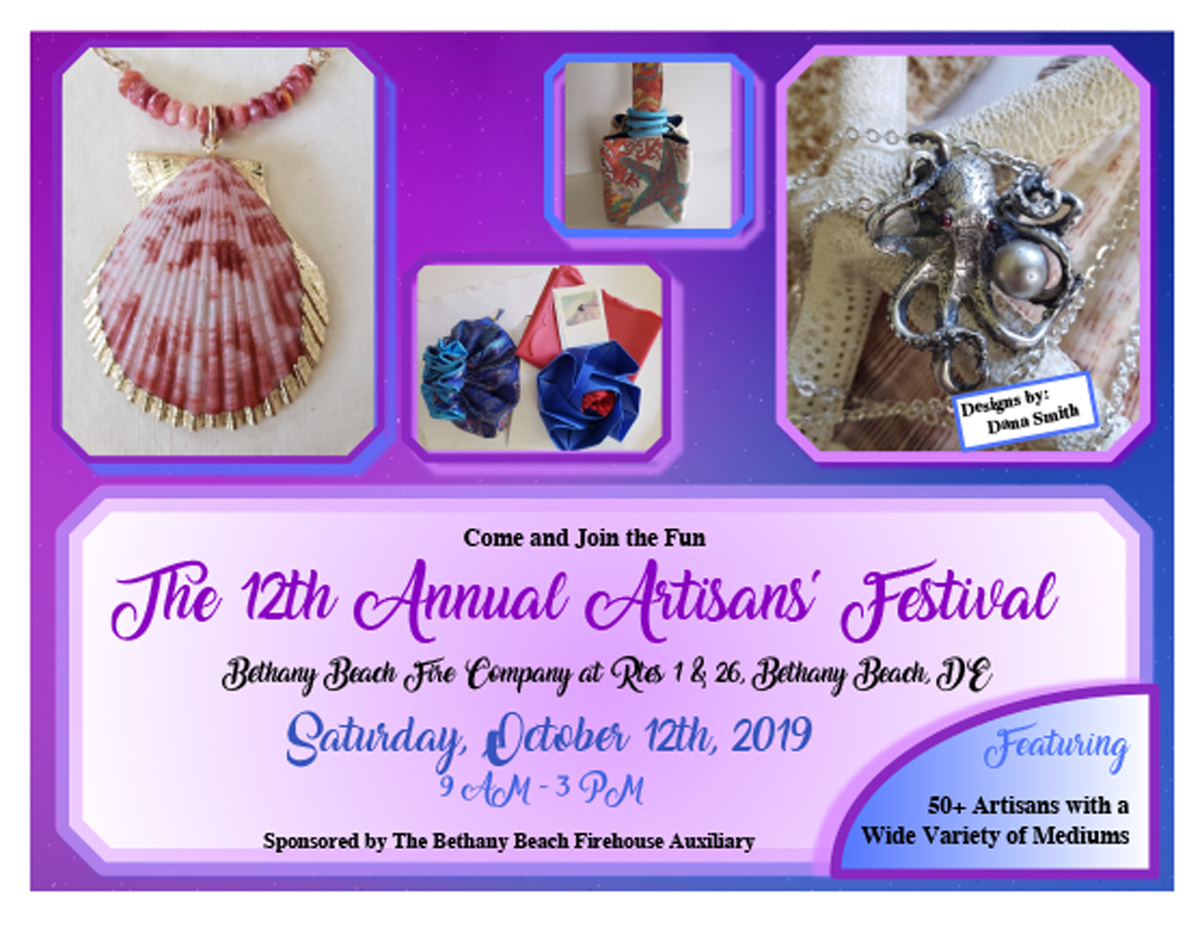 The Bethany Beach Volunteer Fire Company Auxiliary has been busy preparing for its popular second-season event — the 12th Annual Artisans Festival, set for Saturday, Oct. 12, from 9 a.m. to 3 p.m.

The art and craft fair, which utilizes inside and outside spaces at the company’s fire hall, boasts more than 50 artisans, according to Auxiliary spokesperson Sandra McGrath. Shoppers will find a wide variety of items for sale in many different mediums, McGrath said.

Dana Smith of West Ocean City, Md., will be showcasing her jewelry, and her “swag bags,” as well as origami boxes at the Bethany Beach show.

Smith, whose “day job” is doing clothing alterations, said she has been working with fabrics and designing clothing since she was 19 years old — 50 years ago.

Initially, the Berlin, Md., native planned to study anthropology — “until I realized I needed a doctorate to have a career in it. I said, “Ha, I’m going surfing,” Smith said.

She instead pursued a career in fashion, “mostly working for myself,” but also working for local clothing stores, such as South Moon Under.

The self-described “fabric junkie” laughed when asked if she has a studio in her house.

“Well, I have a sewing room,” she said. “I have lots and lots of bolts of fabric,” many of them “sari silks” ordered online from fair-trade sellers in Africa.

“I never would have thought you could order fabric online,” Smith said, adding that she was initially concerned about not being able to feel fabric before buying it. “Turns out, you can,” she said.

In recent years, Smith has broadened her artistry to include jewelry, incorporating materials ranging from African beads to seashells.

“My favorite thing is to sit down and make a pair of earrings, or a necklace,” she said.

Having discovered making silver jewelry with precious-metal clay in recent years, she described it as being “like Play-Doh for adults. It’s a new skill I’m working with,” Smith said.

She laughed again when asked if she had ever taken formal lessons in any of her areas of artistic endeavor.

“It’s just fun,” she said. “I’m always learning something new. I don’t believe I’ve ever had a creative block.”

Smith sells her bags, boxes, jewelry, headbands and other items through the Etsy online platform. Although she said she has developed many nice relationships with customers through her online sales, she relishes the interactions she has at the Artisan Festival and other shows.

“Selling stuff in person is thrilling,” she said. “When somebody buys something in person, that’s a big lift”

Smith praised the Auxiliary for organizing such a high-quality show.

“They’re a great bunch of women,” she said.