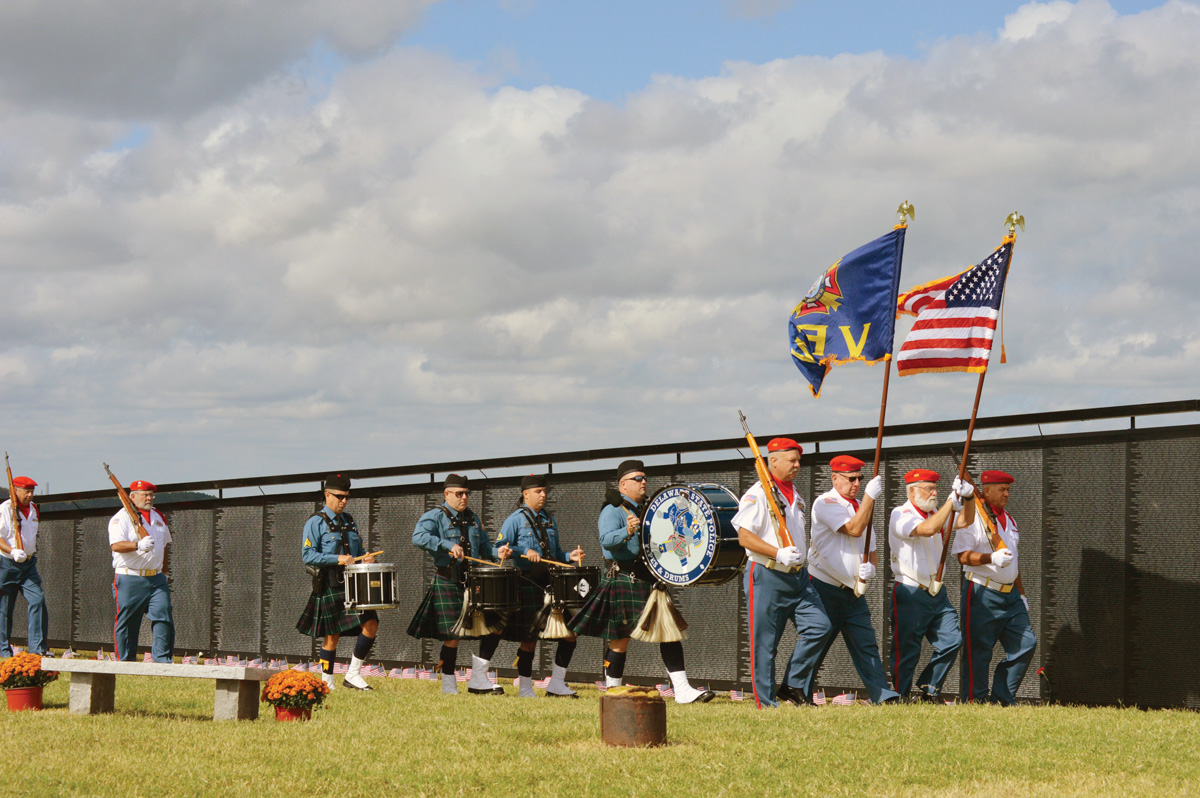 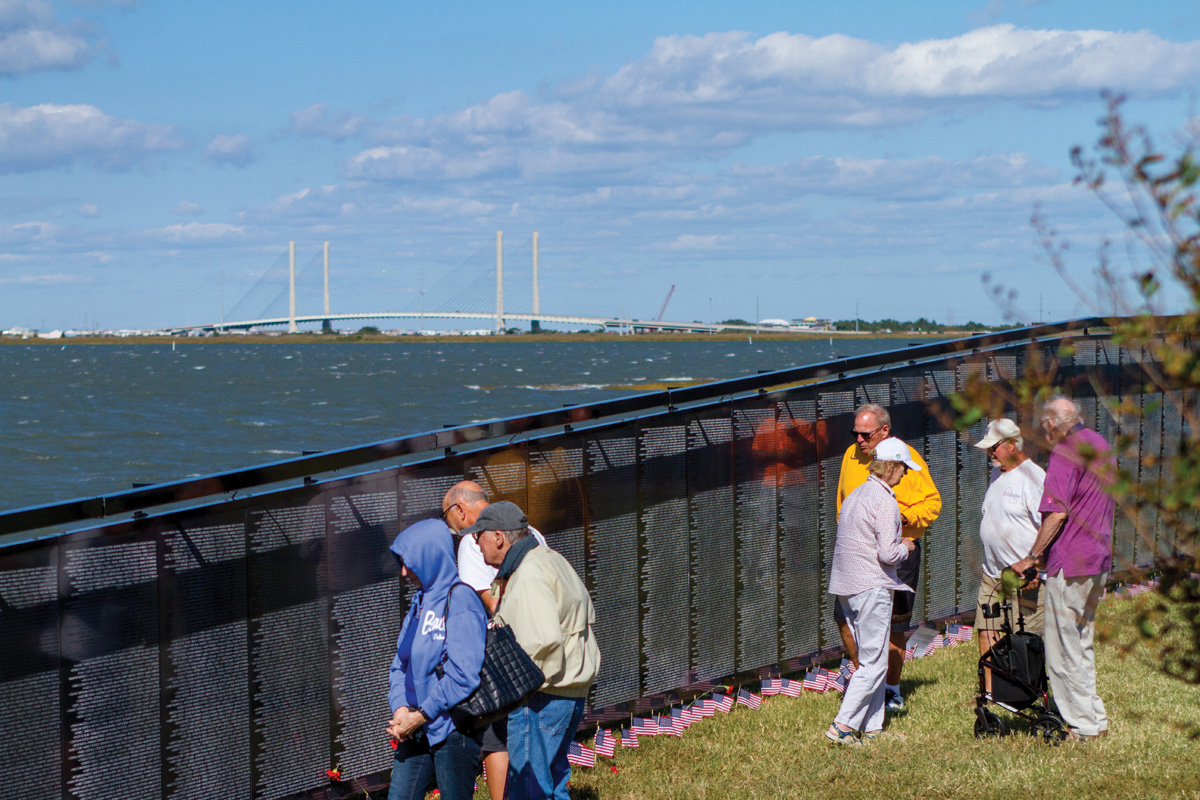 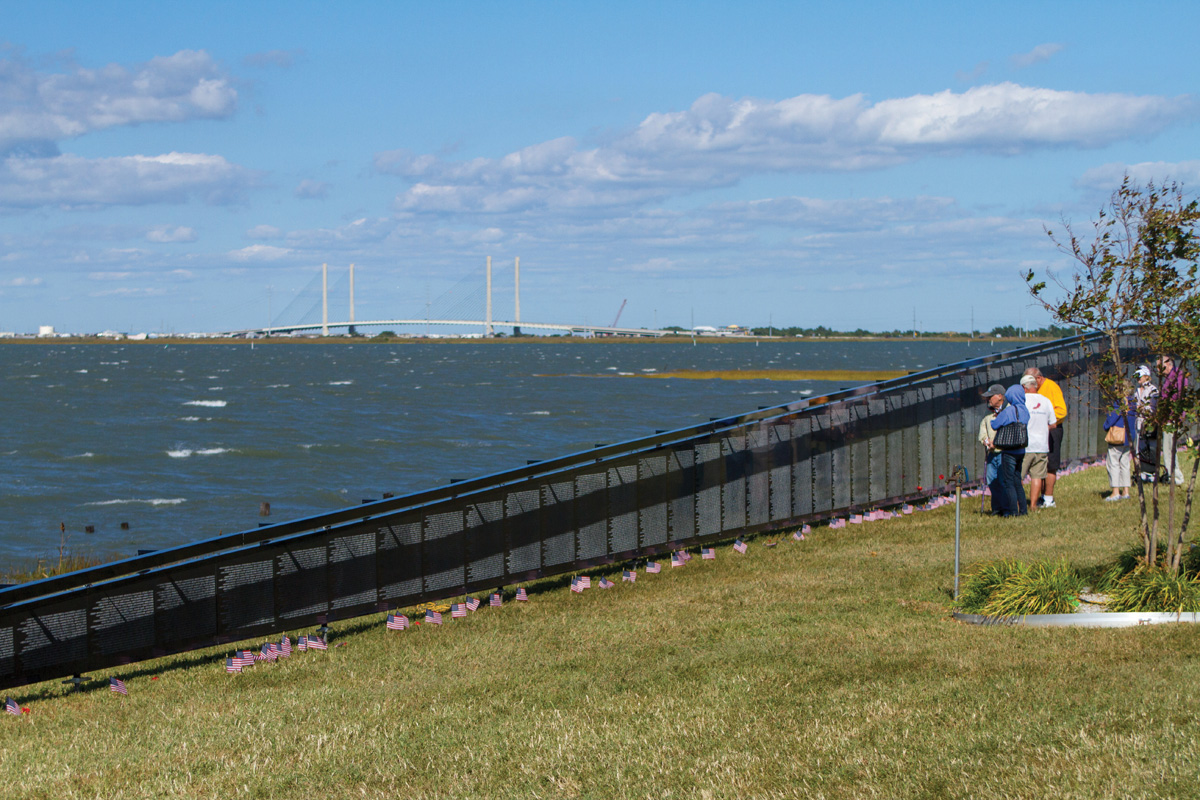 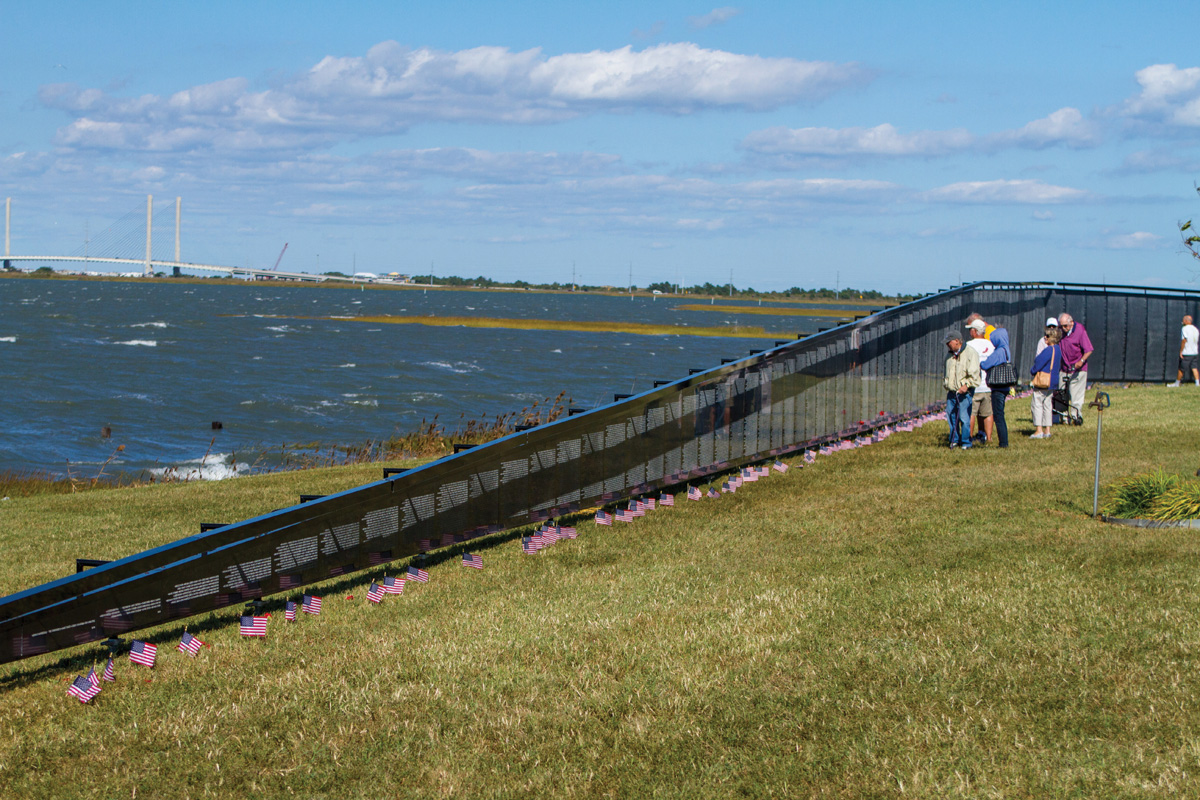 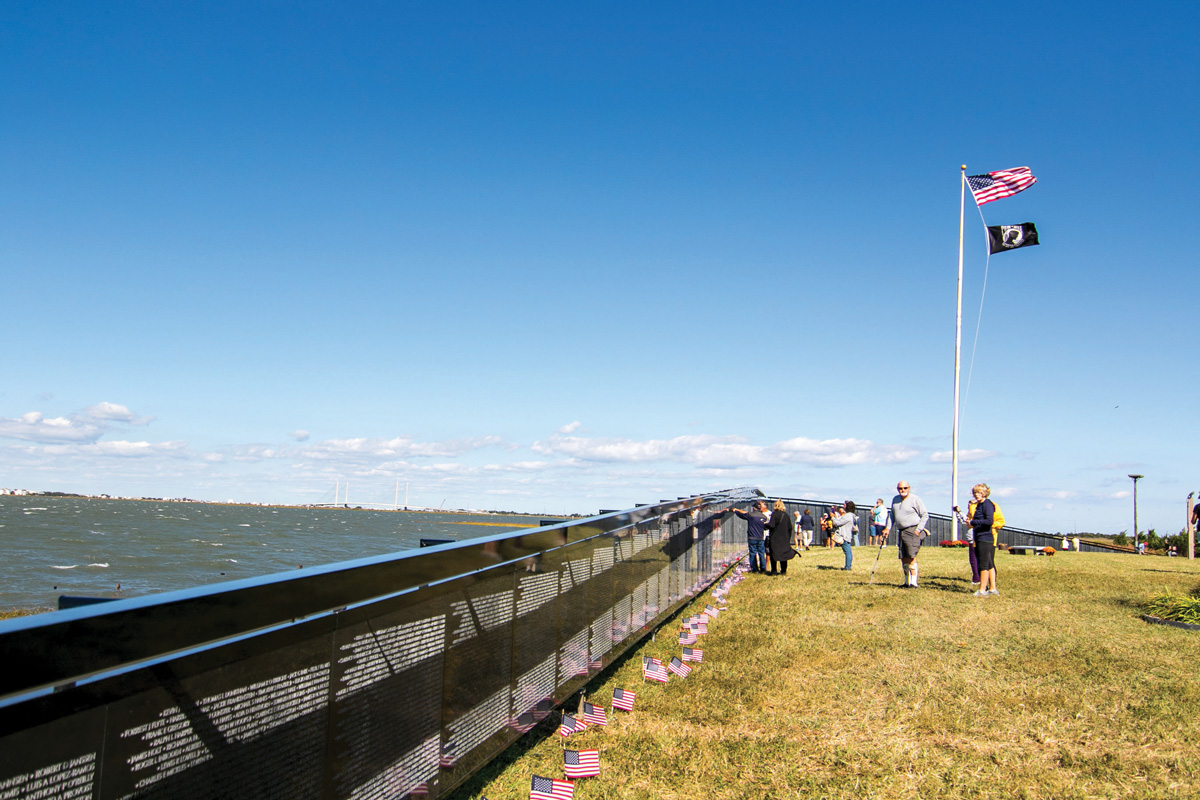 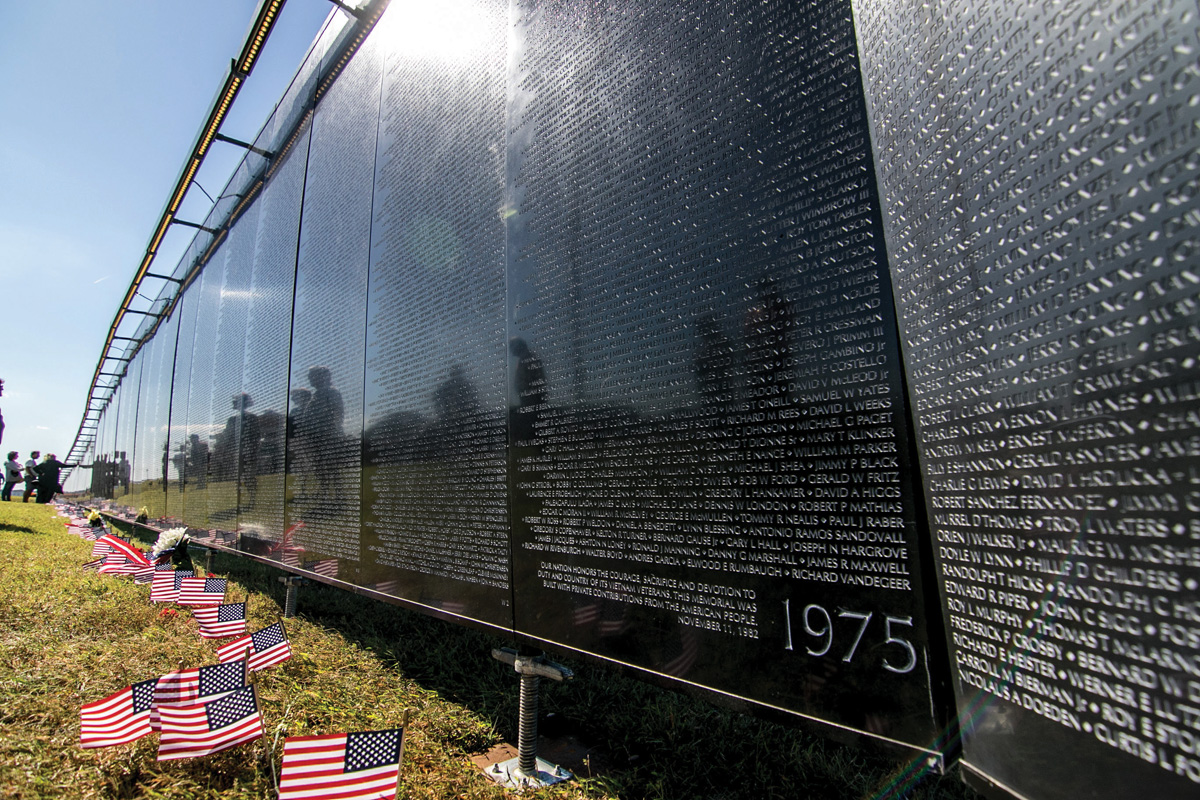 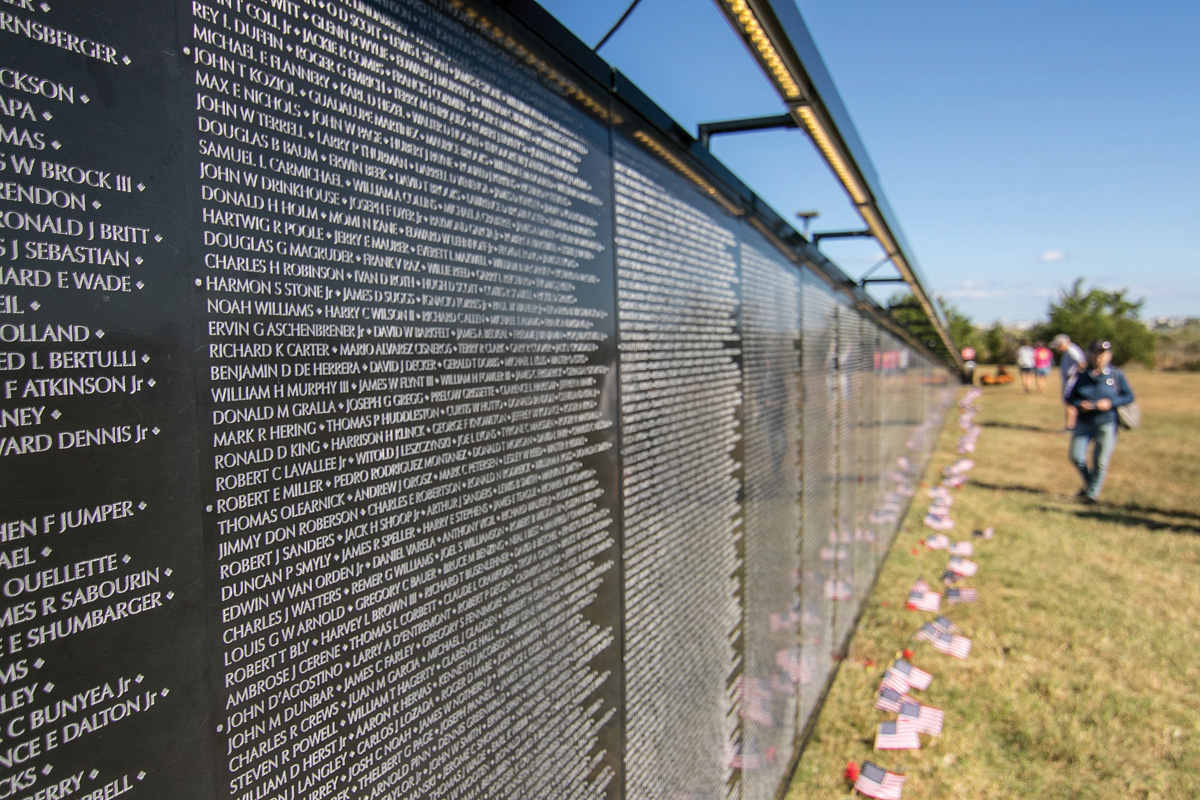 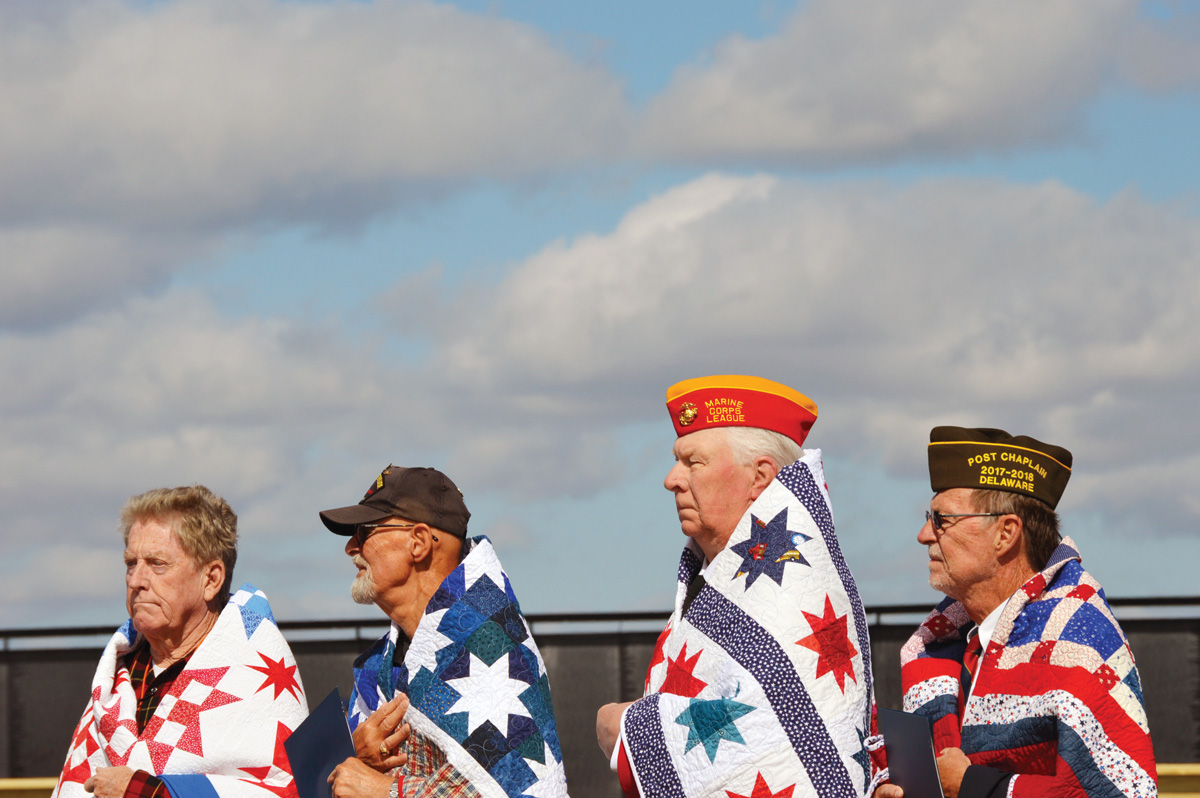 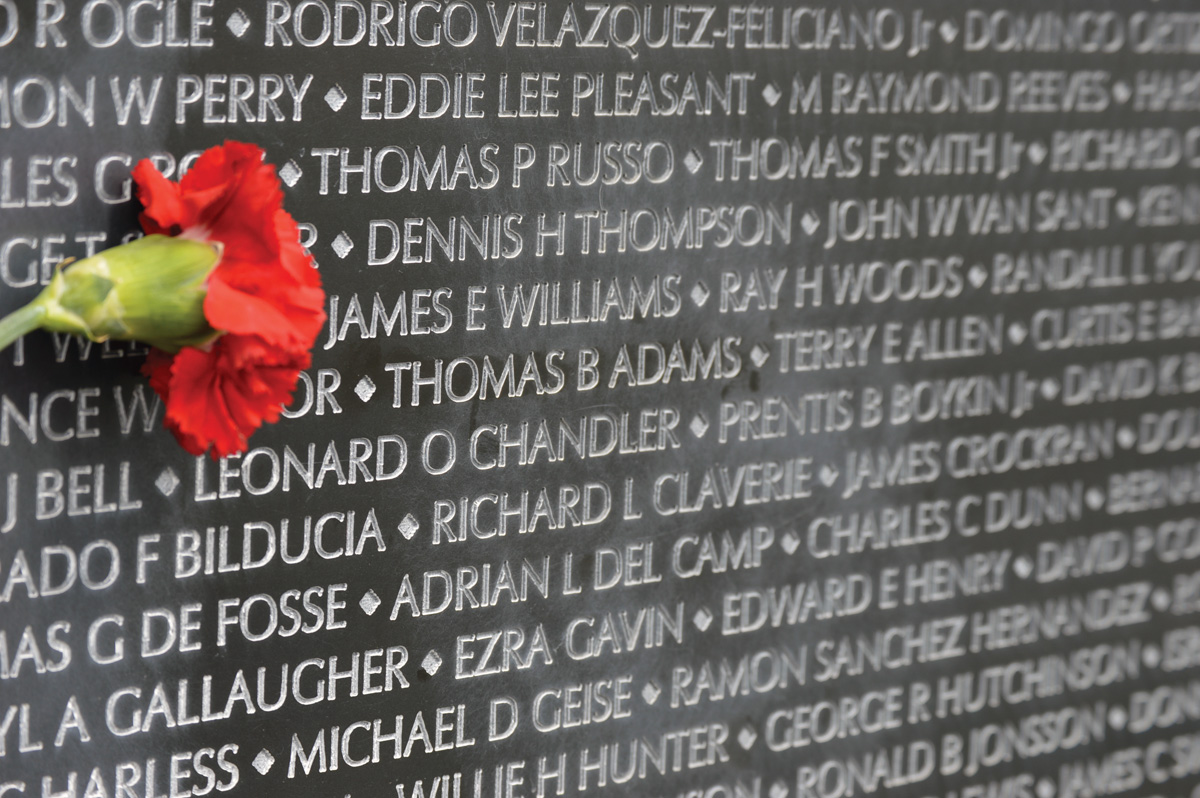 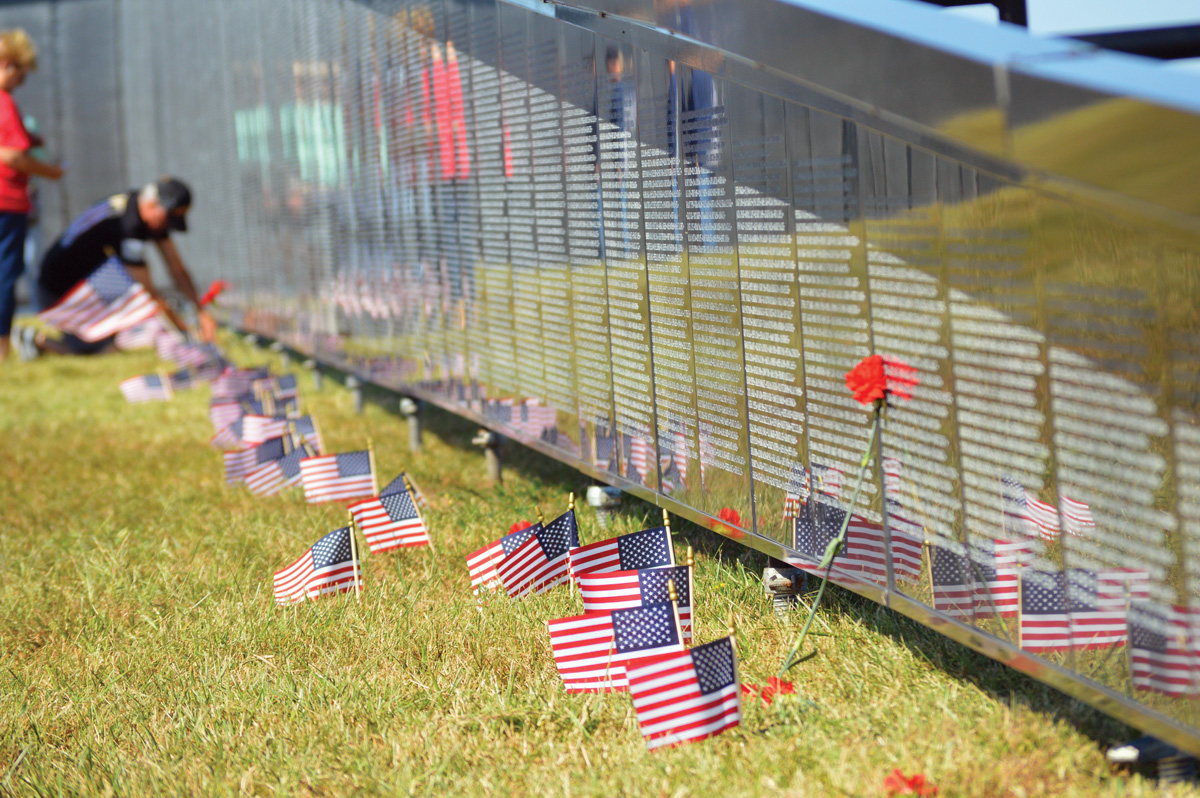 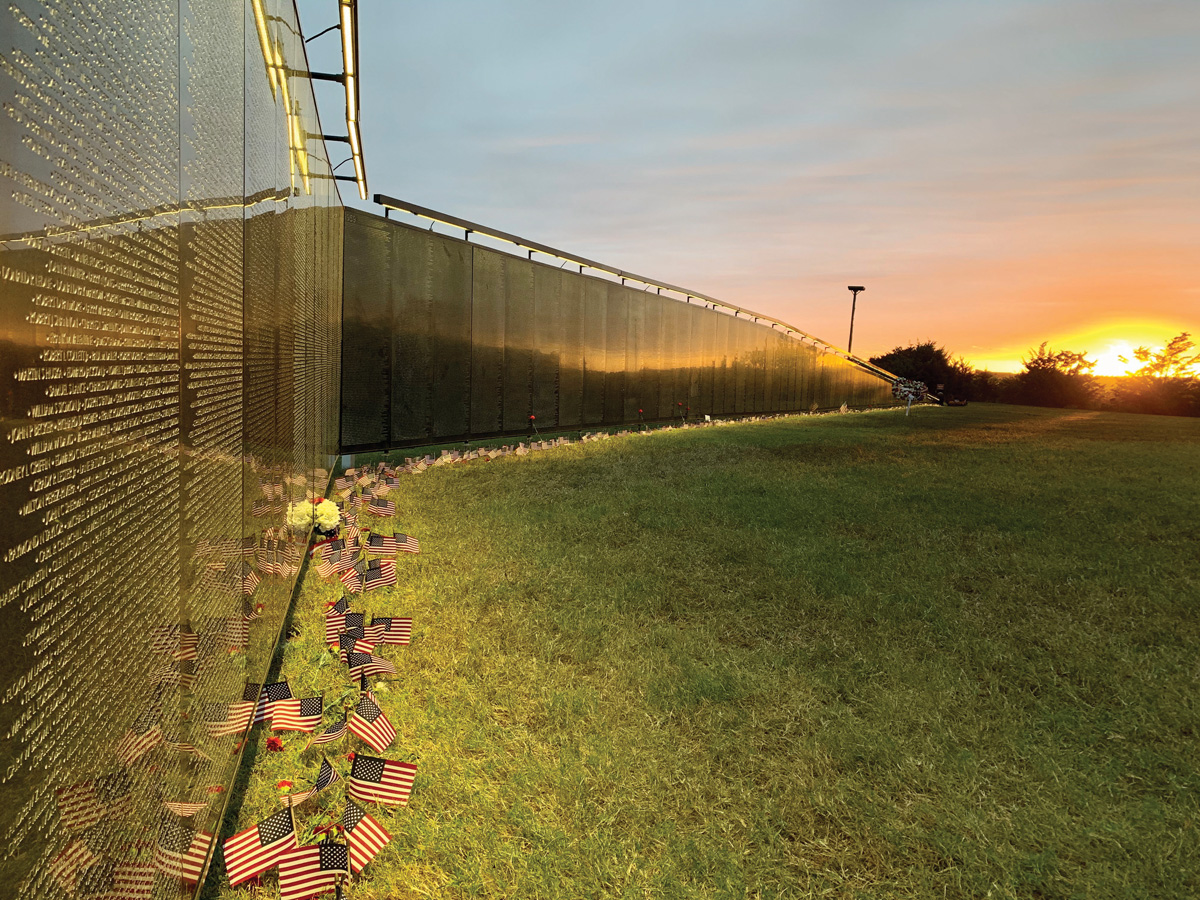 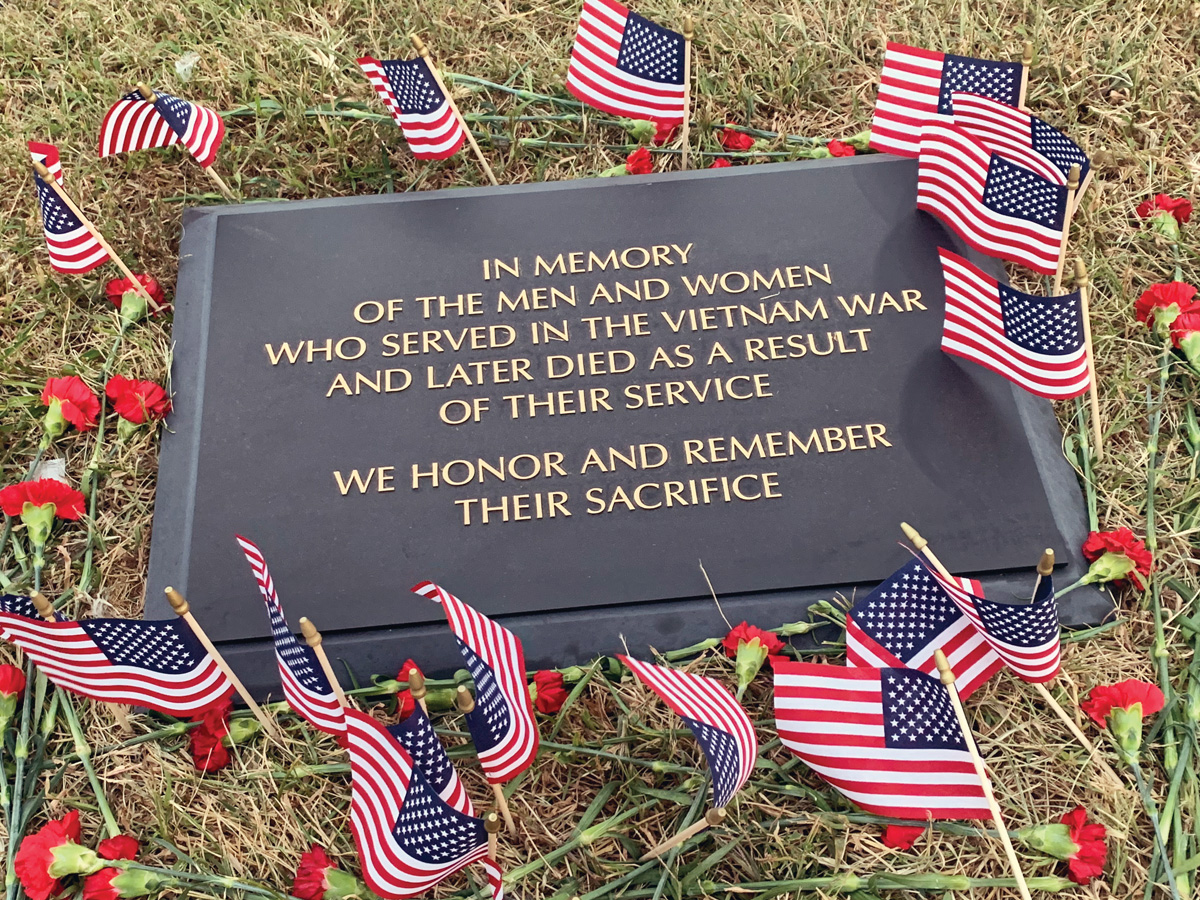 A recurring theme of The Wall That Heals.

Words that Vietnam veterans longed to hear; words that some 58,000 men and women never made it home to hear.

Words that echoed across the grounds of Mason-Dixon V.F.W. Post 7234 many times between Oct. 3 and Oct. 6, throughout a series of events connected to The Wall That Heals, which is a ¾-scale replica of the Vietnam War Memorial in Washington, D.C.

“The Wall” was open to the public 24 hours a day between Thursday, Oct. 3, and Sunday, Oct. 6, and as of Saturday morning, more than 4,000 people had already visited, according to Tim Tetz, director of outreach for the Vietnam Veterans Memorial Fund.

Etched on the wall are the names of nearly two dozen native sons of Sussex County.

Tetz, who has been traveling with this version of the Wall throughout the summer, said the Ocean View location was one of the more successful for the traveling exhibit, due in large part to the number of volunteers working for months in advance to make it a meaningful experience for the community.

“They’ve done such a wonderful job hosting it,” Tetz said. He marveled at the “magical” stories that come out of the Wall’s visits to towns across the country, including that of Selbyville native Thomas B. “Tommy” Adams.

Standing next to the wall at the “point” of the V.F.W. property, Tetz pulled up a blurry, faded photograph of Adams on his tablet. In the image, Adams is in the midst of a wobbly handstand at Dewey Beach, where he had been a lifeguard before his military service.

Then Tetz quickly checks his tablet again, pulling up the location of Adams’ name on the wall —Section E42, Line 60. Just as quickly, he walks to the spot on the wall where Adams’ name is etched — one of nearly two dozen sons of Sussex County families who died serving in Vietnam and whose names are memorialized on the Wall.

The Oct. 5 wreath-laying ceremony also honored those who served in Vietnam and came home, often to hometowns that did not welcome them, to a society torn by its misgivings about the war.

Marguerite Niemoeller and Dana Mason of the Quilts of Valor Foundation presented to local veterans handmade red-, white-and-blue quilts, which before the ceremony were stacked neatly on a table by the stage.

One of those veterans was Rich Kuhblank of Ocean View. His wife, Lene, watched from the audience as Niemoeller and Mason wrapped a quilt around his shoulders.

“It’s so wonderful to see the healing that can finally take place,” Lene Kuhblank said. She attested that her husband, who served as a helicopter pilot, didn’t hear “Welcome home” when he returned.

In fact, she said, it was 30 years before he heard those words.

“He always kept it secret,” she said, not wanting to invite the consternation of those who opposed the war.

“I remember the exact moment,” she said, when someone first approached her husband and acknowledged his service. It was 30 years after he returned, and came from a stranger, in a Kent Island, Md., restaurant.

“I just broke down,” she said.

She noted that the night before he received his quilt, Rich Kuhblank sat at The Wall That Heals as a volunteer, pulling the night shift during the round-the-clock access afforded to anyone who wanted to visit the mobile memorial.

“He had two visitors,” she said of that shift.

Although he made his presence known, he quickly realized the two preferred to observe the memorial in private, and kept his distance.

On Saturday, visitors came before, during and after the wreath ceremony. Some chatted; some just stood before the names, in silence.

Joe Wojchiechowski of Laurel said he had recently come to the Mason-Dixon VFW Post to transfer his membership when he moved to the area from Pennsylvania. Wearing a purple backpack emblazoned with peace signs (“My wife always has to bring a lot of stuff,” he said), he stood for several minutes near the apex of the long, black, V-shaped memorial.

“I didn’t even know this was coming here,” until he visited the post, Wojchiechowski said.

The guest speaker for the wreath ceremony was retired Lt. Gen. Ronald R. Blanck, former Surgeon General of the U.S. Army and himself a Vietnam veteran.

“I am convinced that we went to Vietnam for honorable reasons,” Blanck said. He described Vietnam veterans as the “best educated” and yet “least celebrated” veterans of any war fought by the United States.

Blanck lamented the lack of compassion for veterans of the Vietnam war “until fairly recently.”

“Those whose names are on the wall are not forgotten,” he said. “They are loved. They are missed. They are remembered.”