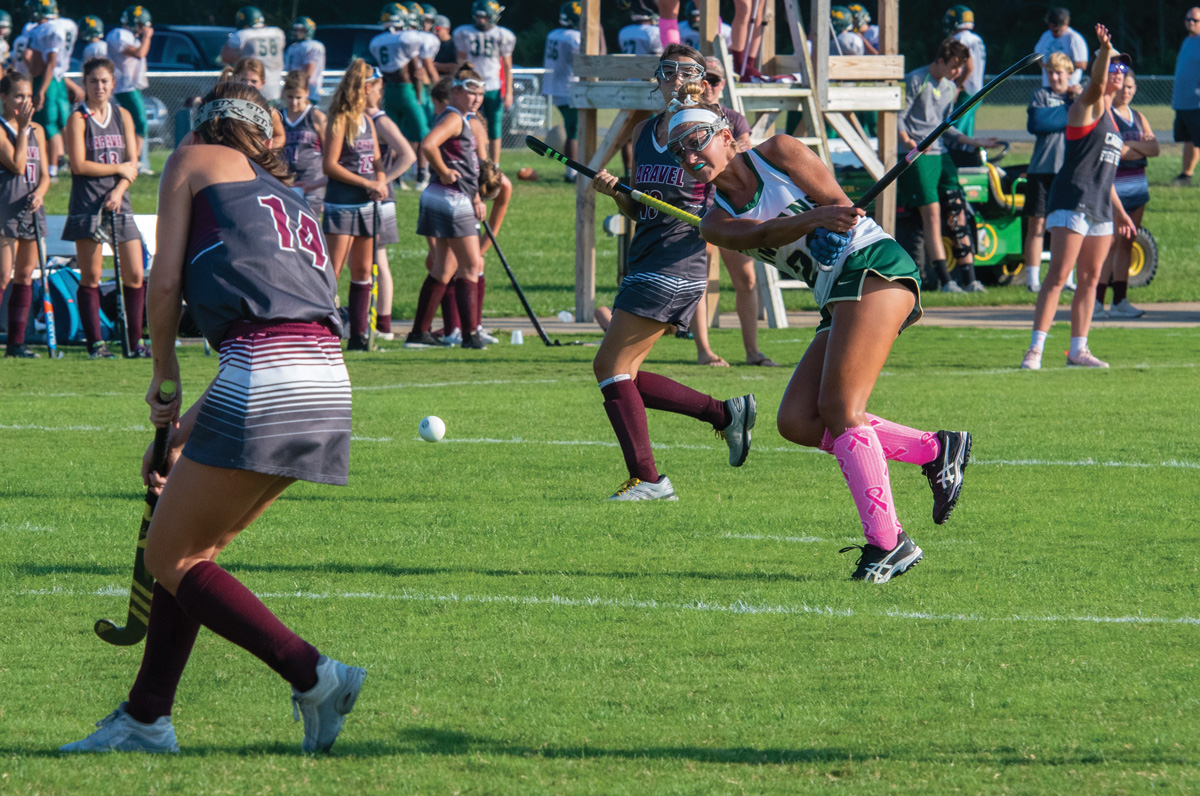 Fresh off their first loss of the season in a showdown of two of the top teams in the state — a 4-1 defeat by Delmar — the Indian River High School field hockey team rebounded rather nicely this week with an impressive 6-0 shutout of visiting Sussex Central on Tuesday, Oct. 15. The game was IR’s annual Stick It to Cancer “pink” game in honor of Breast Cancer Awareness Month.

IR junior Kayler Townsend recorded a hat trick — her second of the season — while also adding an assist to the winning cause. Sophomore Emma Ruley scored a pair of goals, with senior Avery Congleton notching the other.

“The girls responded very well,” said head coach Jodi Stone of her team’s performance against Central following the Delmar loss. “They have the right mindset, and know that sometimes there are some minor setbacks or little hurdles that make you stronger to continue to move forward.”

The Indians hit the scoreboard just over five minutes into the contest against the Golden Knights when Ruley banged home a shot off an assist from Townsend. Just over 10 minutes later, Congleton made it 2-0 with her goal, thanks to a pass from Brynn McCabe.

Townsend scored the first of her three goals with just over 13 minutes left in the first half to make it 3-0 for the home team. She would add her other two goals in the second half, at 27:34 and 6:08, with assists from Morgan McGee and Congleton, respectively.

The three goals for Townsend were her 14th, 15th and 16th of the season so far, while she has also added 11 assists to her stat line. Congleton is second on the team, with 14 goals. Rylie Cordrey is next, with 10 tallies and nine assists.

Ruley wrapped up the IR scoring with a bookend goal with just 1:21 left in the game. She marked her eighth and ninth goals of the season to go along with four assists.

“It’s awesome to coach,” Stone said of her team’s balanced scoring. “They are just finely-tuned to each other. They know each other’s strengths, and where each other is, and how far they can take it. They like to back each other up, so it’s a great combination.”

The Indians out-shot their guests 46-2 and earned 26 penalty corners, to none for the Golden Knights. Caylee Schmidt and Allyson Clark split time in the cage, with Schmidt turning away the only shot that made it on goal.

In the game against Delmar, the Indians gave the perennial power Wildcats all they could handle, and, quite possibly, it may have been the toughest challenge they had faced all season. The contest was part of a series of games known as the Turf Bowl, at the University of Delaware’s Rullo Stadium last Saturday, Oct. 12.

IR found itself in a 2-0 hole midway through the first half, but continued to fight and scrap. Rylie Cordrey got the Indians on the board with 6:47 left in the first half (with assist from Brynn McCabe) to cut the Delmar lead in half at 2-1.

The Wildcats got it back to a two-goal, 3-1, lead before the break with 2:02 left. They would add an insurance goal in the second half at 15:52, on a penalty-stroke shot.

The game was considered a part of the regular season for both teams and gave Delmar (now 12-0 overall after a 5-0 win over Dover on Tuesday, Oct. 15) a one-game lead over the Indians in the Henlopen Conference South Division standings.

Delmar outshot IR, 17-9, with the Indians holding an edge in penalty corner attempts, 5-4, with four of those five attempts coming in the second half. IR goalie Allyson Clark made six saves in the contest.

The Indians gave Delmar all they could handle, and certainly gained some considerable respect from the perennial state powerhouse. As of press time, Delmar held a slight edge in the state rankings, by mere percentage points over the Indians, for the top spot. That is not likely to change, and both teams should find themselves as the top two seeds for the state playoffs following regular-season play.

That should definitely be a sequel worth getting tickets to see. It’s a sequel that Delmar coach Jodi Hollamon is reportedly “pretty sure” will end up taking place.

Extra shots: The Turf Bowl is an annual three-day field hockey showcase that features schools from across the state playing on the Rullo Stadium turf. The IR-Delmar game was one of eight to take place last Saturday. There were also games played last Friday night and several more on Sunday to wrap up the action.