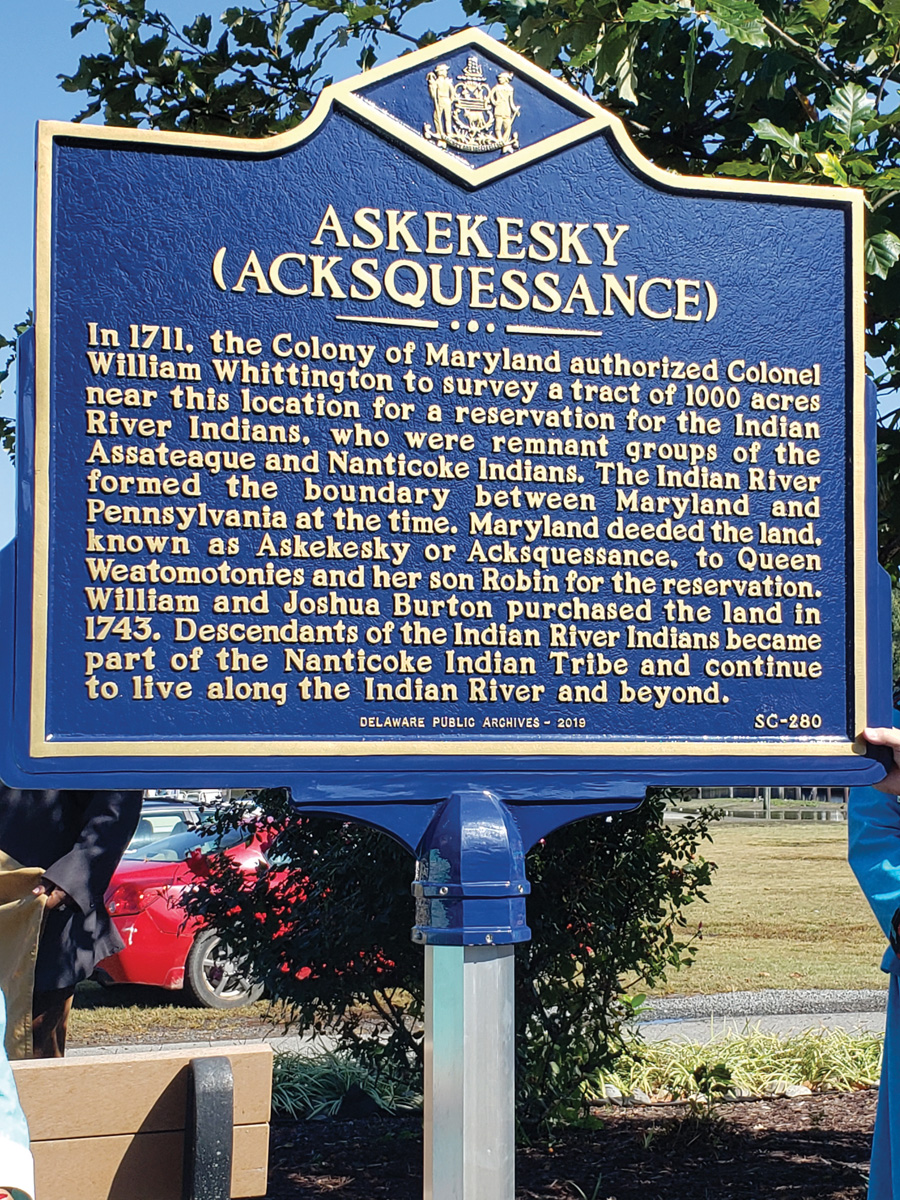 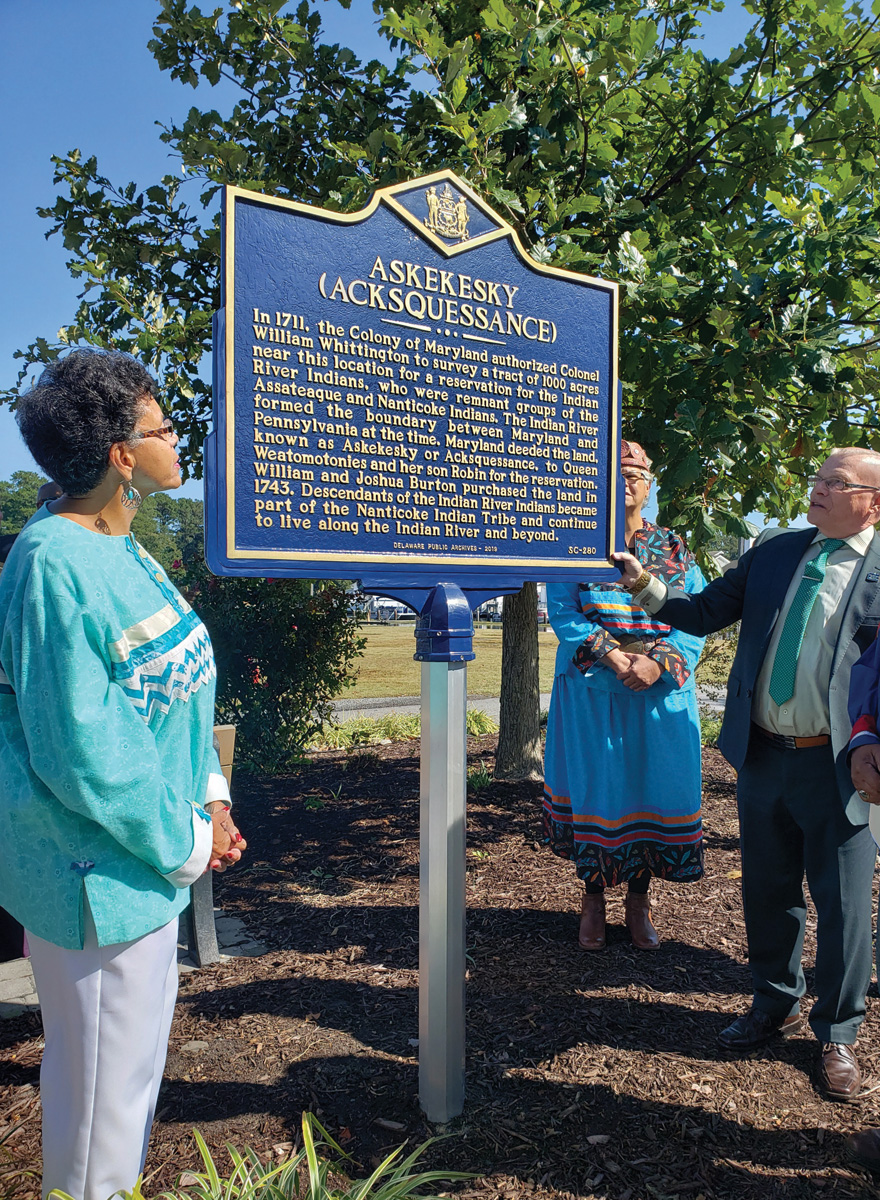 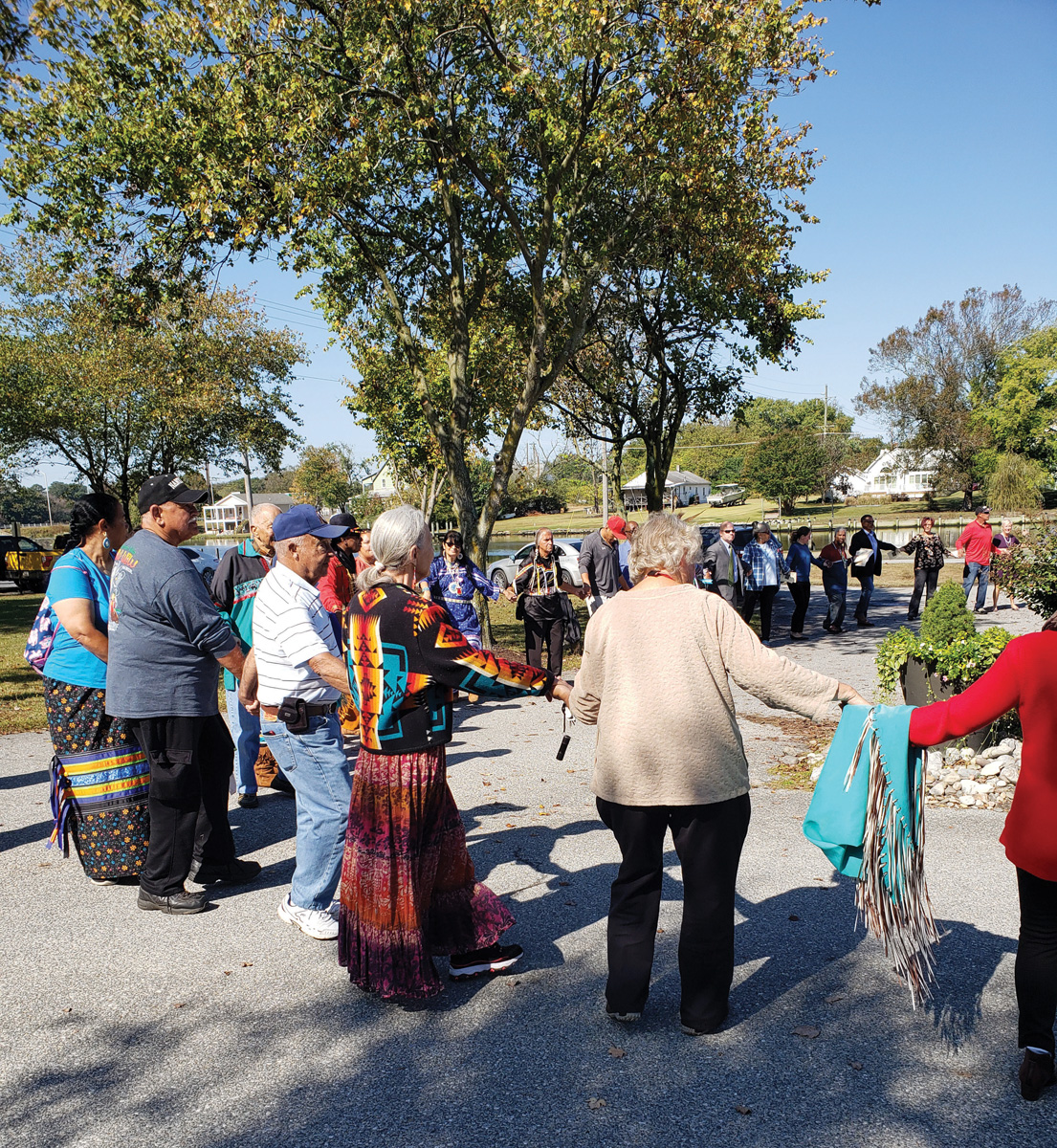 In an atmosphere of joyousness and respect for hallowed grounds where Native Americans once roamed, the Delaware State Historic Marker commemorating the Askekesky Reservation was unveiled this week.

Positioned in the triangular garden just inside Cupola Park in Millsboro, the sign, with gold letters on a blue background, informs readers, “In 1711, the Colony of Maryland authorized Colonel William Whittington to survey a tract of 1,000 acres near this location for a reservation for the Indian River Indians, who were remnant groups of the Assateague and Nanticoke Indians.

“The Indian River formed the boundary between Maryland and Pennsylvania at the time. Maryland deeded the land, known as Askekesky or Acksquessance, to Queen Weatomotonies and her son Robin for the reservation. William and Joshua Burton purchased the land in 1743. Descendants of the Indian River Indians became part of the Nanticoke Indian Tribe and continue to live along the Indian River and beyond.”

The marker was presented during a ceremony on Monday, Oct. 14, by Stephen Marz, director of the Historical Markers Program of the Delaware Public Archives, and Millsboro committee chair Bonnie Hall, as Chief Natosha Norwood Carmine and several others stood close, surrounded by the audience of about 50.

The marker, Marz said, will educate the public about the grounds.

Hall, master of ceremonies for the event and chairwoman of the committee that planned the marker, conceived of the idea for the marker. She told Coastal Point previously that it would memorialize “the Nanticoke Indian tribe’s past, the present and its future for the next seven generations.”

The number seven is significant in Native American tradition, she explained.

“Appropriately, this celebration is scheduled for Oct. 14, Indigenous People’s Day, that honors the Native American, and celebrates our shared history and culture. Being the first inhabitants of Millsboro and the surrounding area, the Commemoration Committee agreed that this marker should be located near the Indian River to celebrate and honor the footprint of the Nanticokes, the Tidewater People,” she said.

At the dedication, Hall said flooding during the previous weekend had caused her to worry about having the dedication ceremony, “But, I said, ‘The creator parted the Red Sea, so he can take care of water.”

“We walk in the footprints of our ancestors [who] walked on this sacred ground where we are today. The prayers of many generations of our people are honored today for their persistence to exist,” Hall told those seated in chairs and on benches in the park.

She thanked former Millsboro mayor John Thoroughgood, because the marker was approved during his tenure.

Street shared a brief history, saying that, in 1608, Captain John Smith sailed up the Nanticoke River and met with chiefs there. Twenty-four years later, the Colony of Maryland was established, and life for Indians “changed for evermore.”

“We were totally encroached upon and devastated,” he said.

Reservations were established from 1698 to 1711 and, in 1711, there was one for the Indian River Indians. Later, it was sold. Some Native Americans earned money working for colonists and bought their own land.

Millsboro Mayor Michelle Truitt said the event was being held where Colonial Maryland was years ago. In 1711, with land of their own, indigenous people enjoyed life, she said. In the 1730s, when the land was sold, some left and others assimilated with the colonists, she noted, praising Native Americans for overcoming obstacles that were often unparalleled.

Carmine deemed the marker “a legacy for all generations.

“Without history, we just repeat the same mistakes over and over. Another thing history shows us is, without God, there is no hope,” Collins said.

As the ceremony began, Jackson blessed the grounds by walking with sacred smoke and was later described by Hall as “one of our hardest working individuals [who is] very quiet in spirit and doesn’t ask for much.”

After the unveiling, the audience was invited to join hands for a Round Dance with the Tidewater Agency Drummers and Nanticoke Indian Dance Troupe.

“Everyone is welcome. We welcome everyone. Please join us,” one of the Native Americans, in traditional regalia, said as the circle formed and attendees, holding hands, moved one way, then the other.

The Native American Round Dance, also called a Circle or Friendship dance, is designed to be inclusive and hospitable.