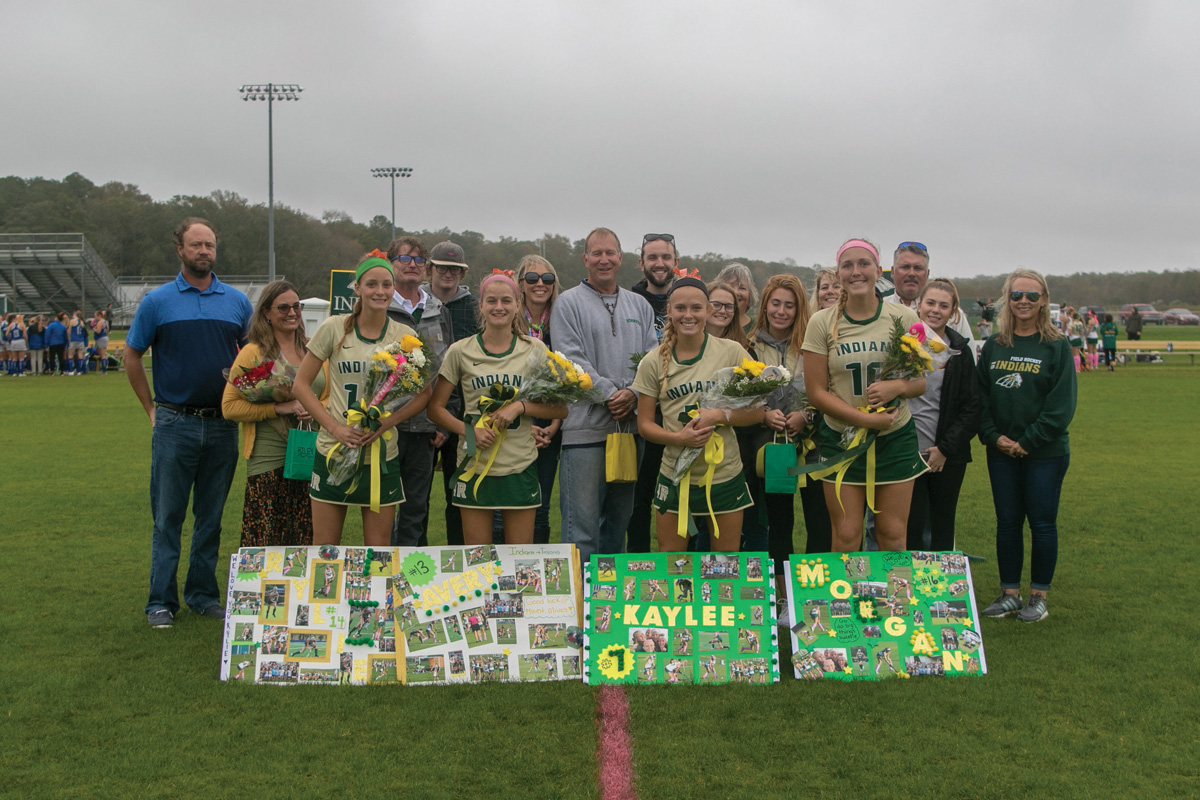 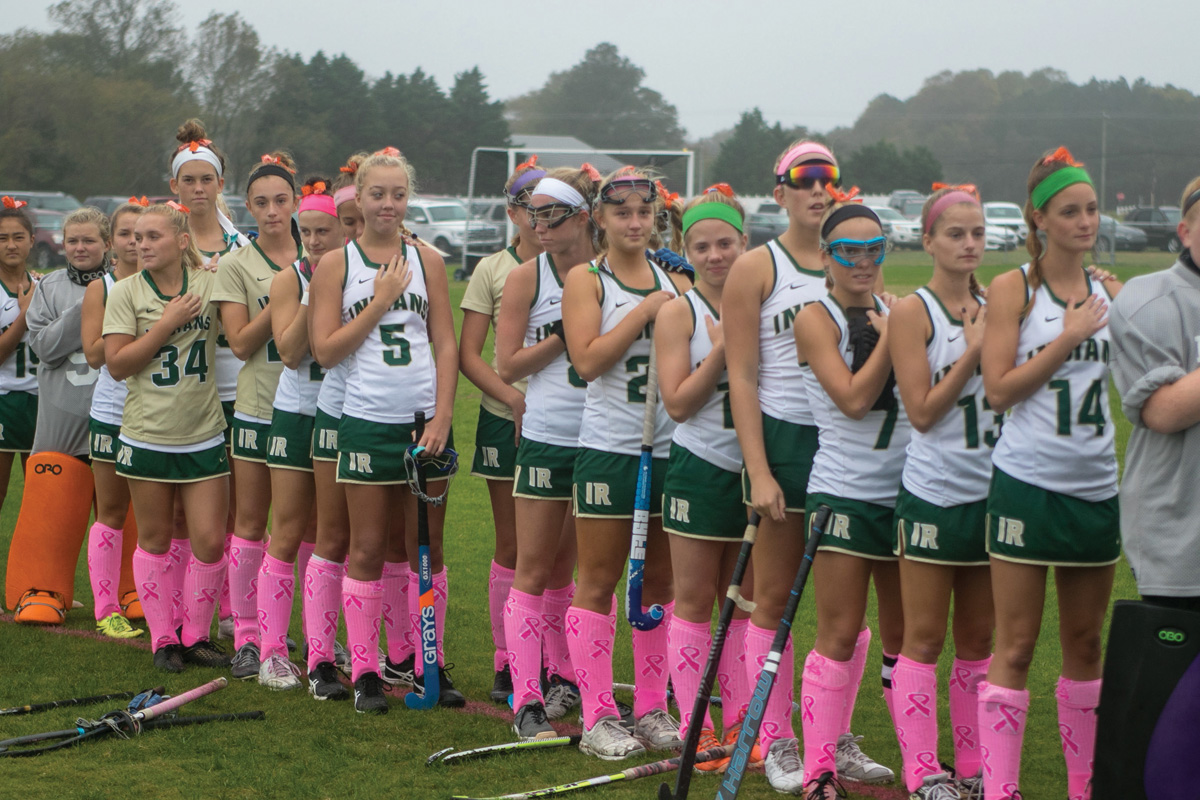 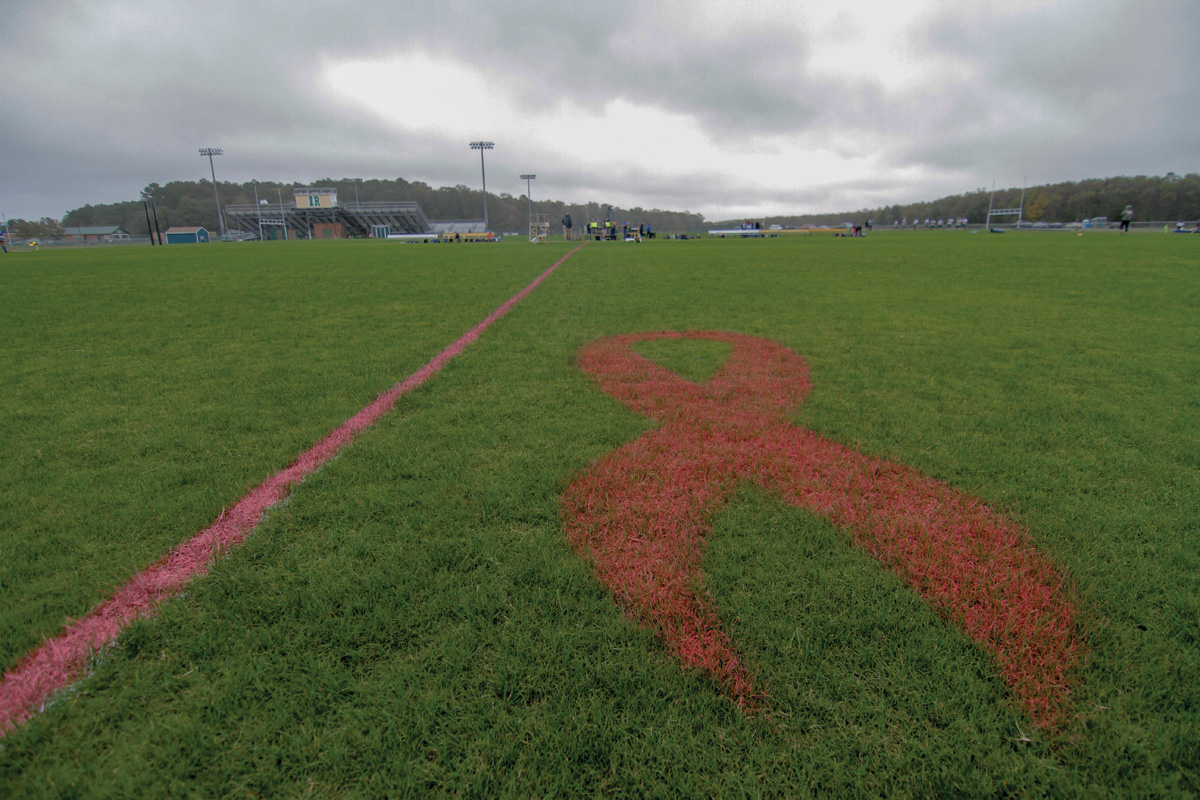 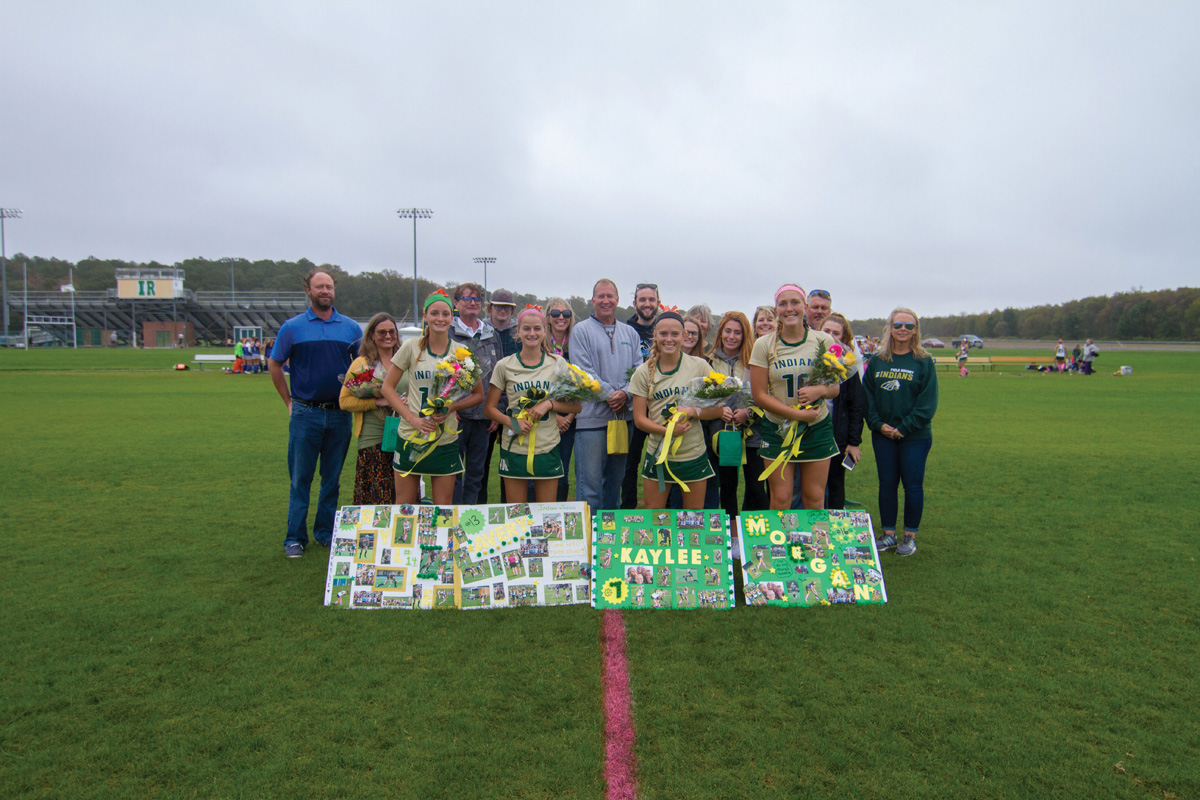 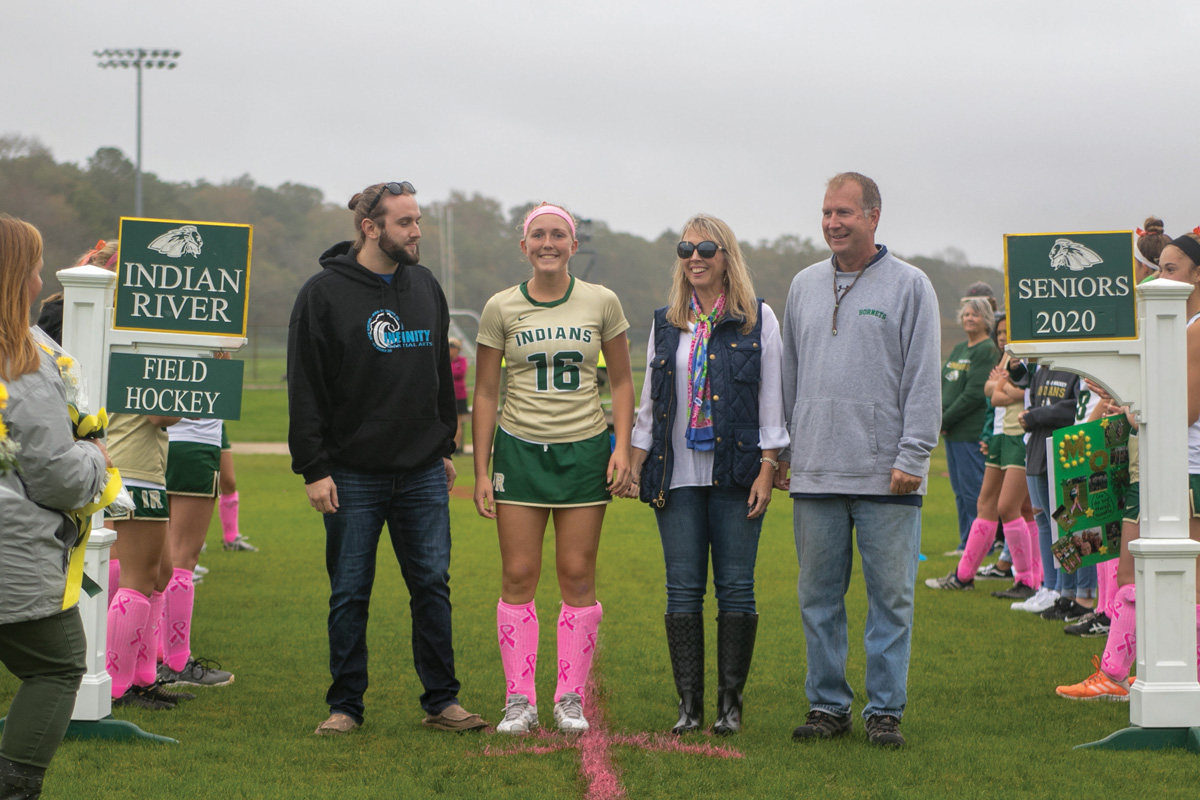 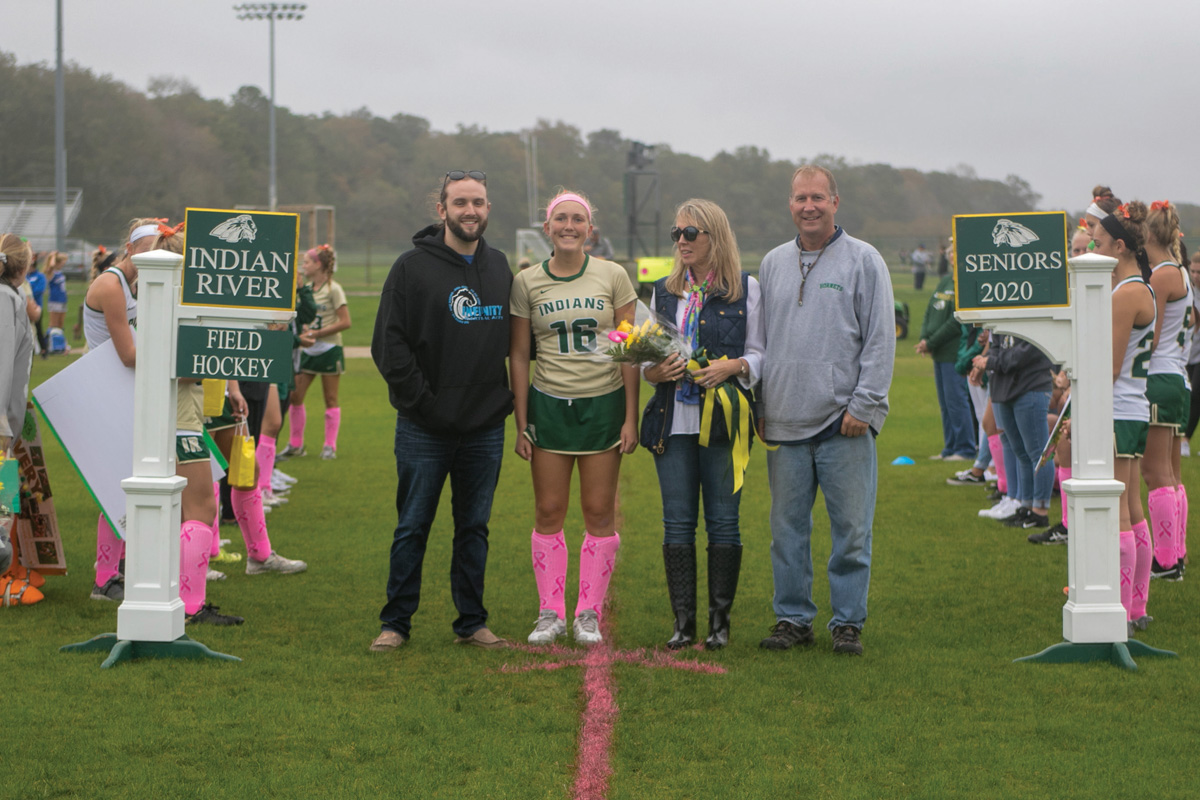 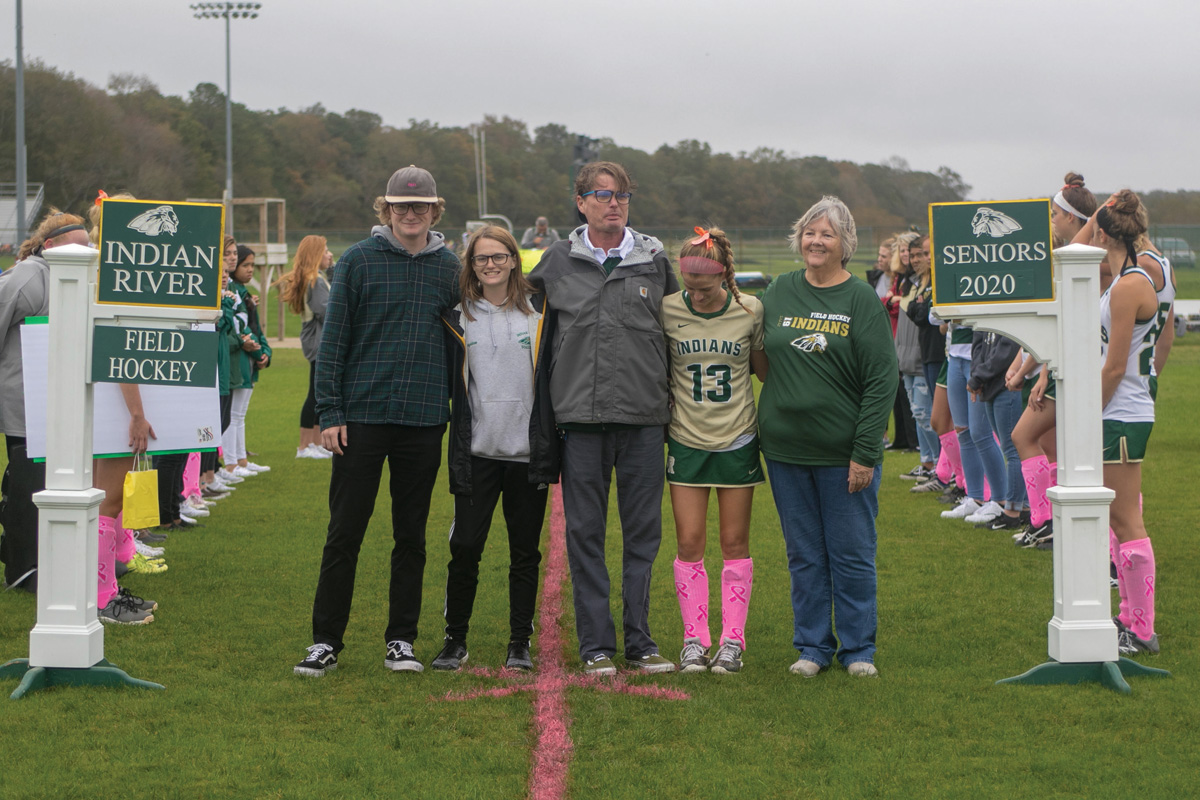 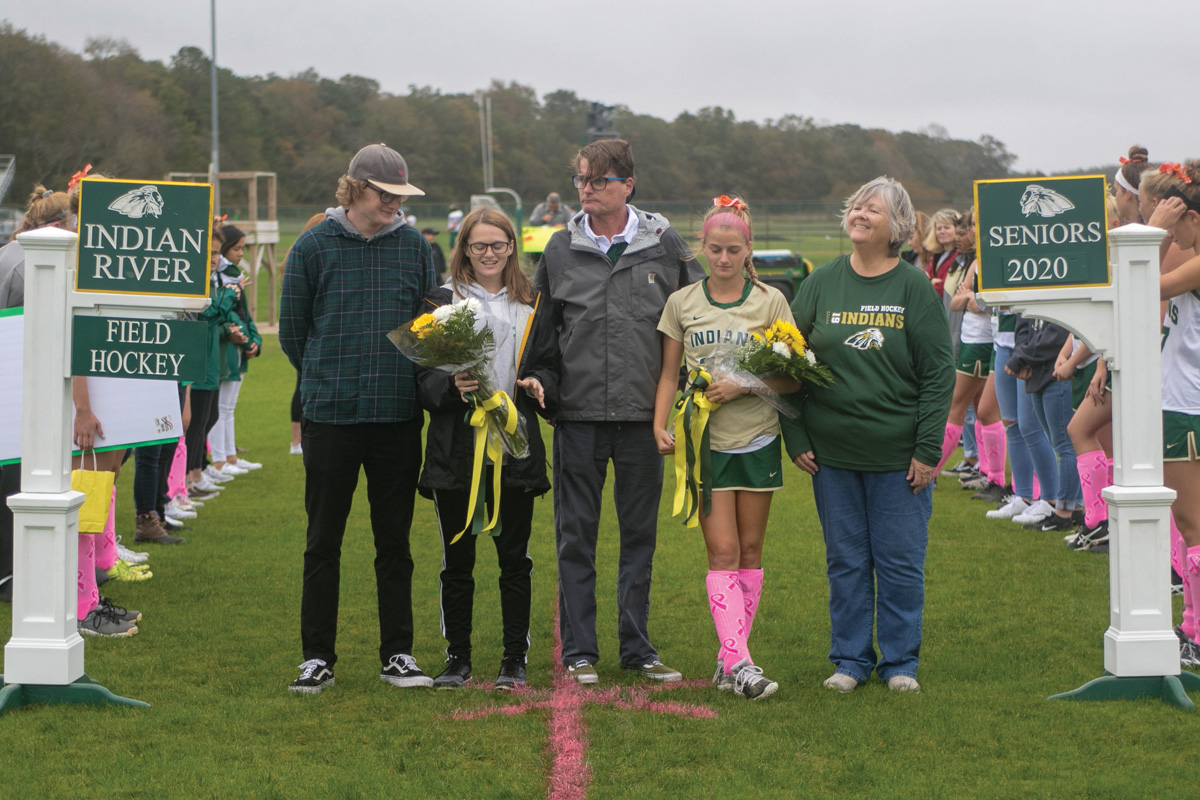 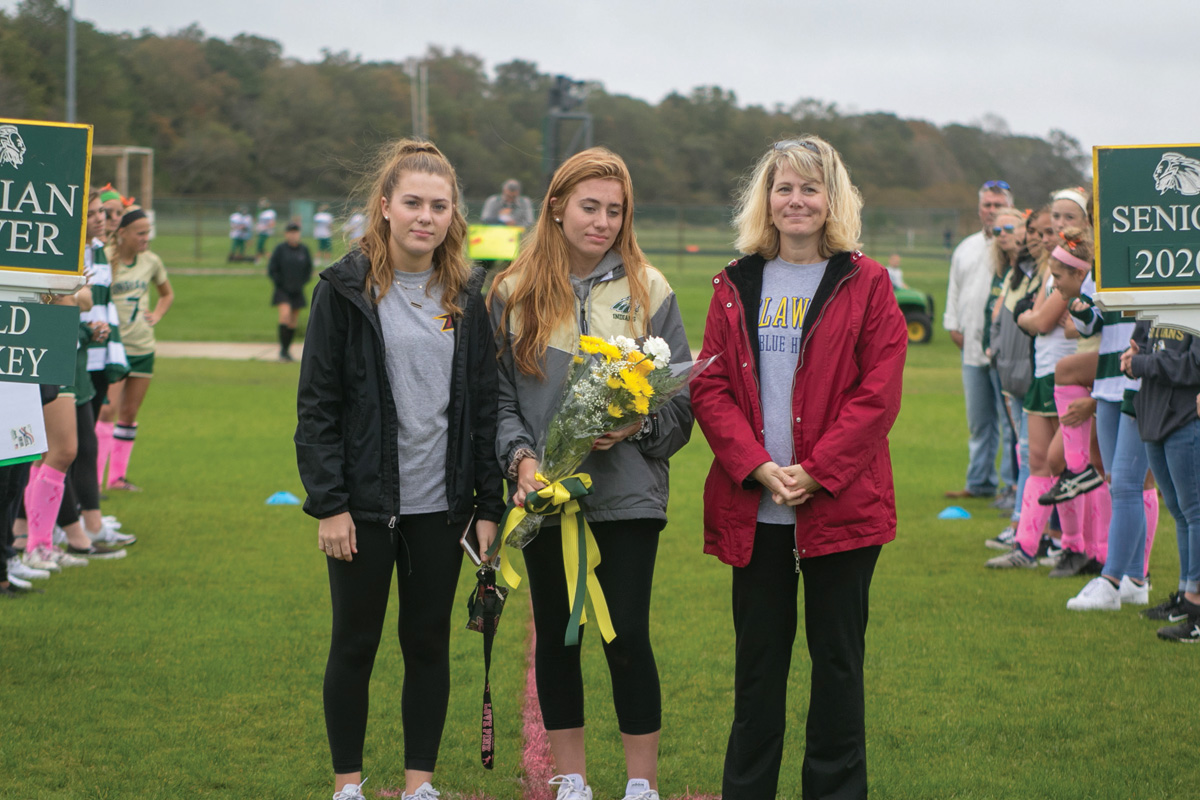 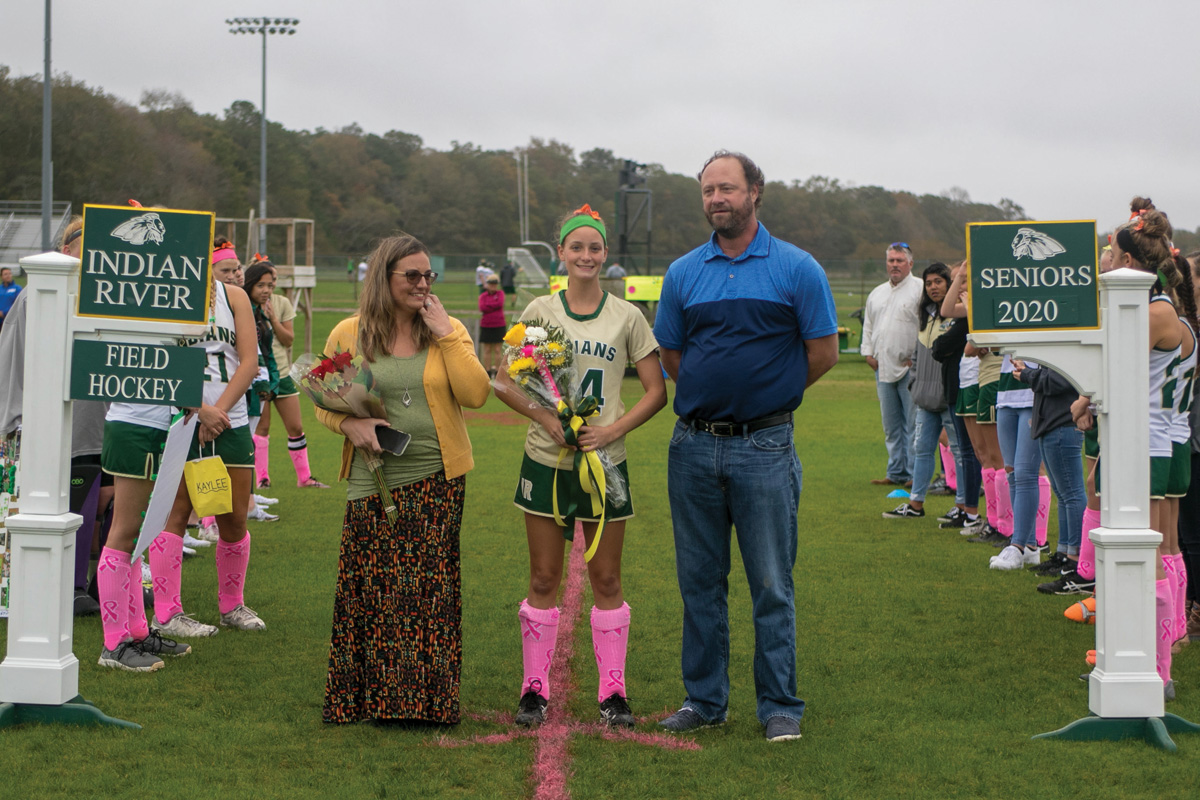 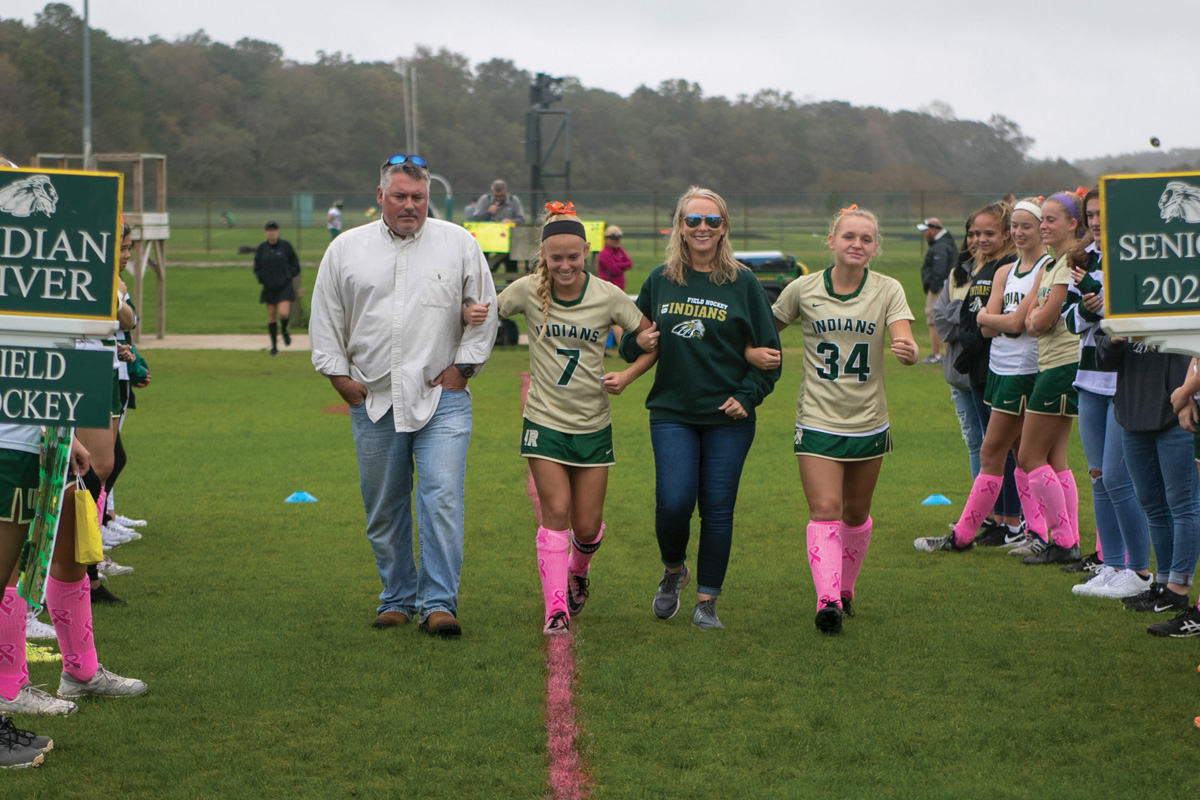 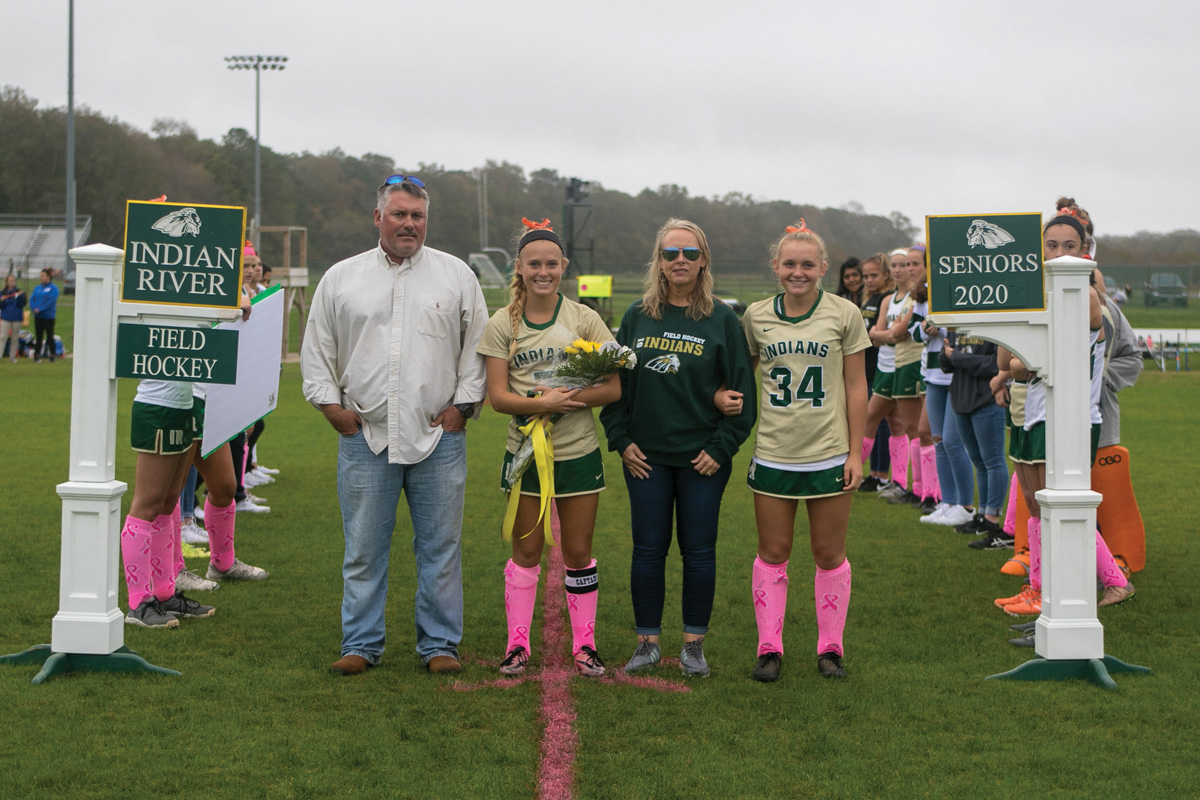 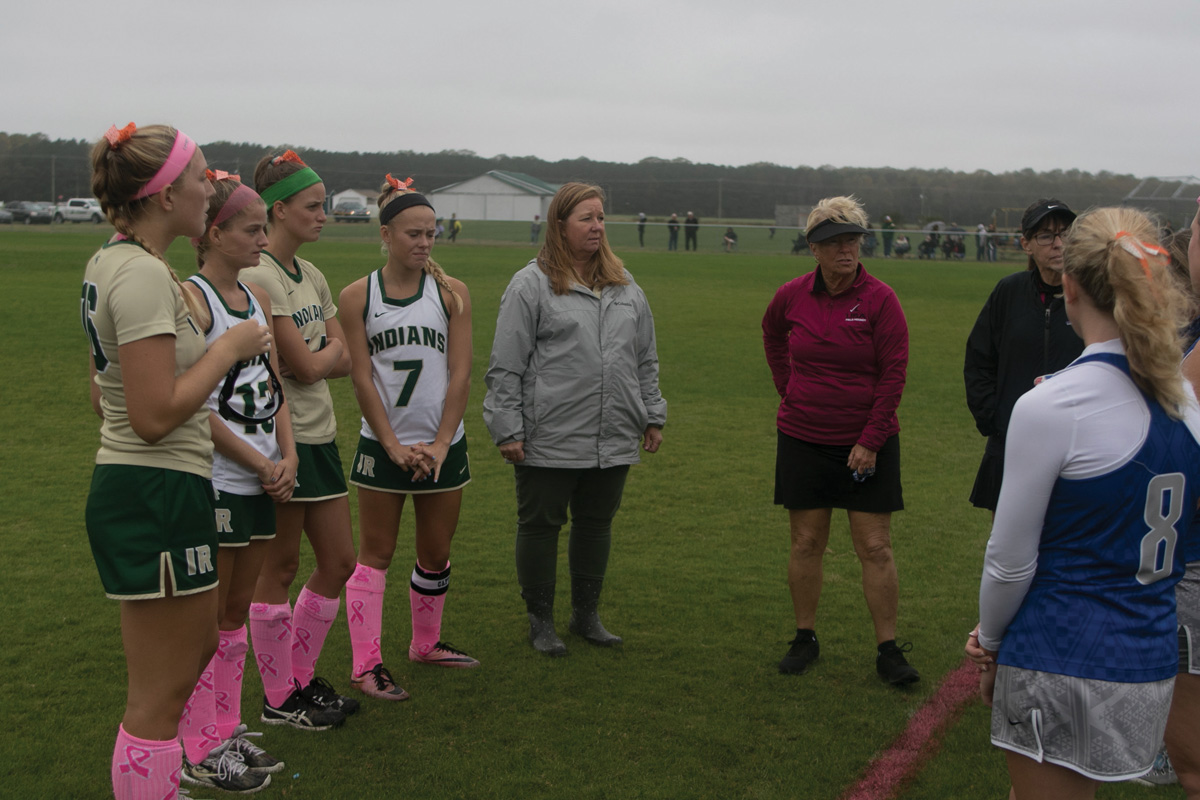 It was not the type of weather one would ideally dial up for playing field hockey, but that didn’t stop the Indian River High School squad from doing what they do best — take care of their home turf.

Cordrey and Congleton each got into the first-half scoring barrage, with Kayler Townsend and Brynn McCabe each adding two goals apiece. Townsend also had a pair of assists, with Cordrey adding another.

“The Core Four” of seniors have helped lead the program to this 13-1 season thus far, and head coach Jodi Stone has enjoyed being there every step of the way.

“Both on the field, off the field,” Stone said of her seniors after the Woodbridge win. “They are well-rounded individuals that take their jobs very seriously. Since they were freshmen, they’ve wanted to take this program to the next level, and they’ve achieved it.”

The Indians struggled a little early on — not that one would have noticed on the scoreboard — but the wet field conditions, coupled with the cold misting precipitation, made things difficult at the start. It took the better part of the first 10 minutes before they were able to get situated.

“Once we got acclimated to the conditions, and once we got the actual feel of the full field, we made a couple of adjustments to get going,” continued Stone.

Congleton scored the lone goal of the second half at the 26:16 mark, with an assist from Cordrey, to put the final touches on an otherwise dominating performance.

IR out-shot their guests, 26-4, while also holding a decided advantage on penalty corners, at 14-3. Goalies Allyson Clark and Kaylee Schmidt combined for the shutout. Clark faced no shots through her 30-minute first-half shift, while Schmidt turned away the three Raiders shots that made it on goal.

The Indians had one last game scheduled in the regular season, against Seaford on Thursday, Oct. 24, and early this week were hoping to take care of business against the Blue Jays. A win would end the regular season at 14-1, and would give the team the best regular-season mark in school history.

Then will come the waiting game, in which the Indians will have to sit back and await word on their DIAA Division II State Playoff seeding. Currently, IR sits at the No. 2 spot in some rankings, directly behind Delmar.

“That’s the tough part, the waiting,” admitted Stone. “The anticipation. You just turn it over, and hope that the stats, and strength of schedule and everything, and the stars kind of align so that you get in the right bracket to play the right people so you can continue your season.”

On Thursday, Oct. 17, IR had hosted Lake Forest in a tough Henlopen Conference South Division contest that they would win, 2-0.

Congleton and Cordrey scored the goals for the Indians in the first half, with Emma Ruley assisting on Congleton’s goal at the 27:14 mark. Cordrey was unassisted.

Clark was stellar in goal, making six saves to pick up the shutout win.

Lake managed more penalty corner chances, at 7-6, but the Indians would have the upper hand in total shots for the game (19-12).

The DIAA Division II State Playoffs get under way on Tuesday, Nov. 5, but the Indians’ regular-season performance should earn them a first-round bye to the quarterfinals. That round is scheduled for Saturday, Nov. 9.

The state semifinals are slated for Wednesday, Nov. 13, while the championship game is slated to be played on Friday, Nov. 15, at the University of Delaware’s Rullo Stadium.