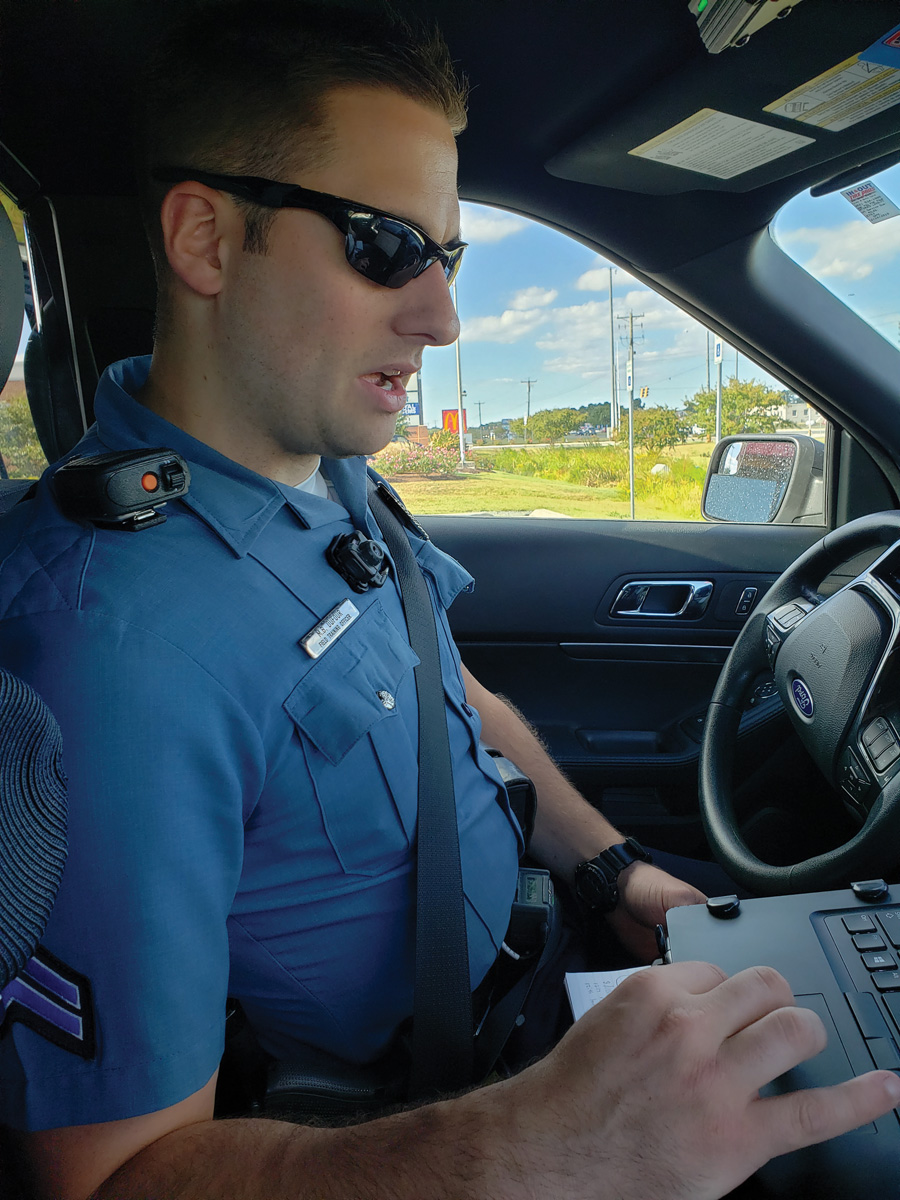 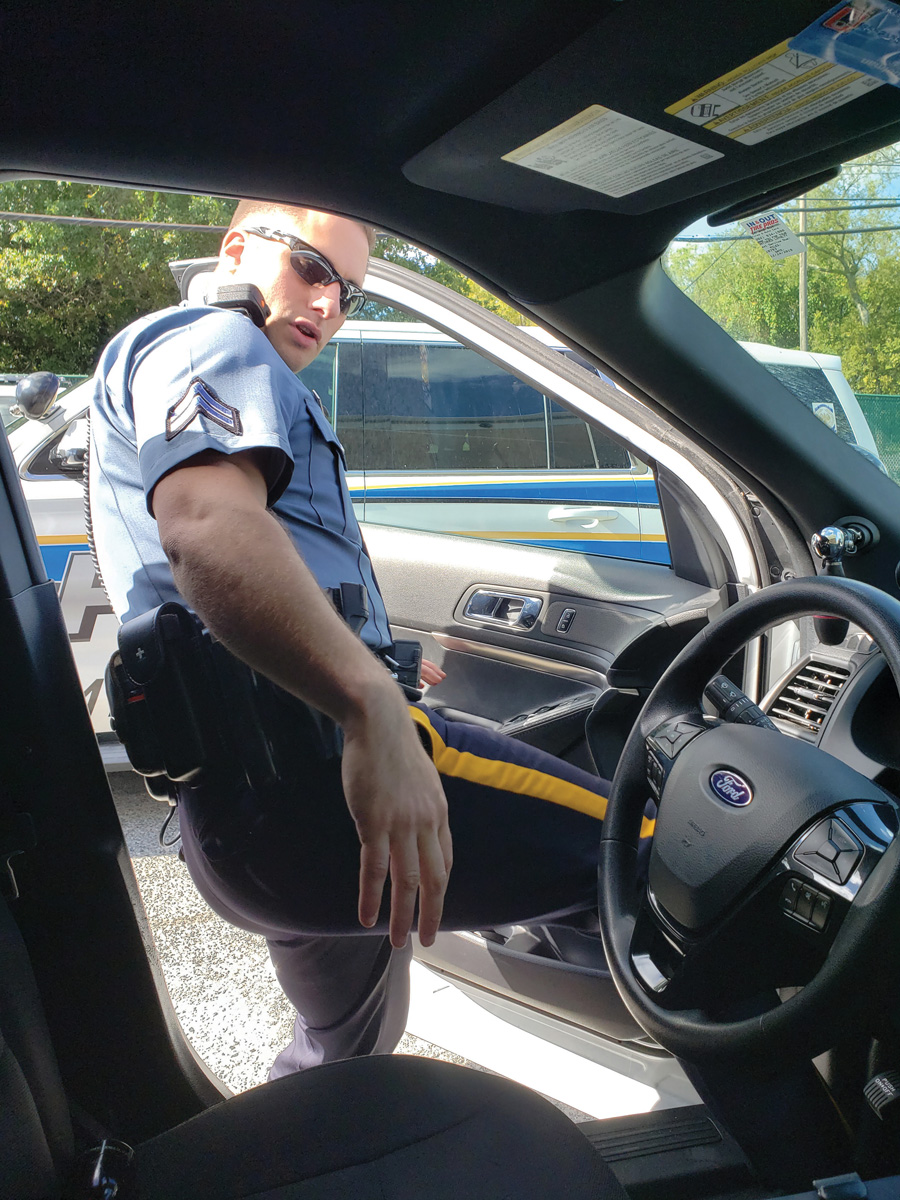 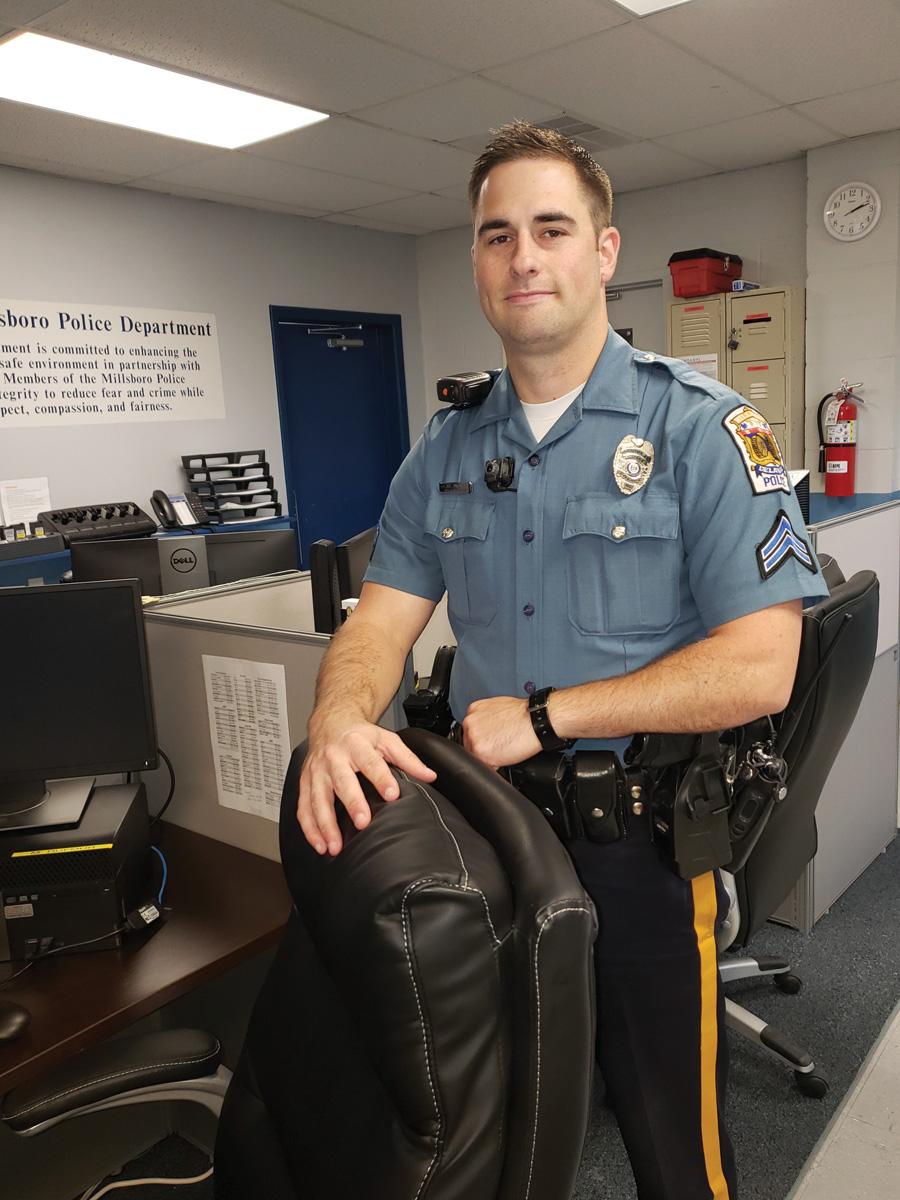 An hour with the Millsboro police

There’s something a little unnerving about having a police officer, in full uniform, hold open the door of a patrol car and ask you to get inside.

Even when the officer is the polite and pleasant Cpl. Matthew Dufour, and even when you had, a few minutes earlier, been shown around the Millsboro Police Department, welcomed warmly by Dufour and a smiling Chief Brian Calloway, and were offered a bottle of cold water.

Still, I hesitated for a moment, leaned inside and looked at all the equipment and buttons. In my mind’s eye, I saw my dear mother, aghast that her baby girl was setting foot in a police car. But it was a much-anticipated ride-along, and I knew she would have loved Cpl. Dufour.

I sat down and, as much as I hate wearing a seatbelt, buckled and waited as Dufour walked around to the driver’s side, settled in his seat and explained what’s inside, from the Computer Digital Technology program on the laptop, known as CAD, to where his rifle is secured, how the bars on the back windows keep indecorous detainees from punching or kicking out the glass and which buttons are pressed for different types of siren yelps.

He fills out a daily activity sheet and carries multiple items in the trunk and in a bag — flares, orange traffic cones, a handheld resuscitation ventilator, evidence bags, binoculars, shackles, digital scale, gloves, masks and Narcan inhalant mist to stop an opioid overdose.

We were only on the road a few minutes when Dufour answered a call from headquarters, telling him a trophy had been stolen from the counter at a local fast-food restaurant by a trio of customers who grabbed it, positioned it in the center of their table while they snacked, as though to admire it, then rushed out the door.

“Can we put the siren on?” I asked, but he smiled and shook his head. Maybe I watch too many episodes of the old “Andy Griffith Show.”

Keeping with regulations, he wore the wide-brimmed police hat while walking inside, and I followed him.

The employee was understandably upset about losing the company trophy she was awarded, telling Dufour it wasn’t taken that day, but in August. Caught up in hectic workdays, she hadn’t noticed it wasn’t on the counter until a co-worker mentioned it.

“I worked very hard for that. The fact that he took it kind of pisses me off,” she told Dufour.

“We certainly want him to be accountable. Did you talk to the staff? Was he acting strange, maybe like he was drunk?” Dufour asked.

“I don’t know. I just think it was three people on vacation. They thought it would be funny to take my trophy,” she said.

Footage she shared with Dufour showed the car leaving the parking lot with men inside, and the trophy, and he copied down the make and model, plus the license plate number, but Dufour went further. He congratulated her for working hard and being recognized, and encouraged her to ask the corporate office to send a replacement trophy.

Back in the patrol car, he ran the license plate number, but it didn’t match the make and model of the car.

“It could be the license plate was stolen,” he said, adding that he would follow up.

I asked about the commonly held belief officers have quotas to meet, so must write a certain number of tickets every day.

“I can tell you with 100 percent confidence that does not exist in Millsboro,” he said, although some agencies do set quotas.

Locally, emphasis is placed on meeting high standards of community policing, getting out of the car and talking with business owners and local residents while patrolling a neighborhood. As assistant shift supervisor at the police department, where he’s worked six years, Dufour, 31, mentors new officers, orders equipment and is careful to uphold the dignity of an officer in uniform.

His 8-year-old son, Jaxon, and 6-year-old daughter, Claire, are proud of him, and that means the world to Dufour, who served in the U.S. Infantry in Iraq before becoming a police officer. He and his wife, Rachel, live in Millsboro with their children and dog. His father, Rod Dufour, a retired Baptist minister, was recently sworn in as the Millsboro Police Department’s first chaplain.

The pastor was asked to accept the position by Calloway, who joined Dufour and me for an informative conversation before we got on the road, explaining items on the duty belt officers wear — and that Dufour’s children compare to Batman’s iconic utility belt — weigh 20 to 25 pounds and include a Taser.

Each Taser costs about $2,200, and the police department has 14. Officers are required to be Taser-certified, and Millsboro has one of the few police agencies that is accredited. Every patrol officer carries a Taser and, interestingly, each has to endure being Tasered — an experience Calloway likened to being electrocuted, although he said it affects everyone differently.

“Some people forget. They forget they were Tasered as soon as it’s over, and they get back up and come after you. We Taser five to seven people every year,” Calloway said, explaining that displaying the weapon as a warning is often enough to deter a suspect.

“It smelled like paint. I still remember that,” he said.

There are no holding cells in the building, a former post office built in the 1950, so those arrested sit on a bench, handcuffed to the wall behind them, in a holding area. They are photographed and fingerprinted; then an arraignment judge, in a video exchange, determines if they will be released on their own recognizance, get a court date or be incarcerated. About 90 percent are able to leave. If the judge orders incarceration, the arresting officer must drive the suspect to the Sussex Correctional Institute in Georgetown.

When the judge comes on the screen, the officer must swear that all of the information contained in the warrant is true and correct. A Holy Bible is on top of the machine for taking that vow.

Anyone arrested while intoxicated cannot be arraigned until sober but will get a breathalyzer test at the police station. In Delaware, anything above .08 blood alcohol is illegal.

Calloway explained that Millsboro police patrol about 4 square miles, with 12 officers on patrol, each working 12-hour shifts and everyone covering all 4 square miles.

In the last three years, the police department has had CAD, giving officers GPS in each car.

Every officer carries a pistol, and there’s a rifle in the car. Officers arrive at work in street clothes and change into their uniforms at the police station, in a locker room with shower. They don’t take patrol cars home with them, though some other local agencies’ officers do — a perk of the job that’s also been touted as a way to ensure a more rapid, prepared response in an emergency, as well as a deterrent to crime in the areas they live.

Later, as Dufour and I rode along the streets of Millsboro, I asked if he dreamed of being a police officer when he was a boy.

“My kids look up to me, and I know they are proud of me. I was proud to be in the military and I’m proud to be a police officer. It’s satisfying. In this job, there are drugs on any given day, and it comes in spurts,” he said, explaining there could be a theft, then the item stolen is sold to get money to buy drugs.

“There are definitely tough days, but what gets you coming back are the really good days, and they far outweigh the bad,” he said.

A graduate of the Delaware State Police Academy in Dover, where he studied for six months, he started working in Millsboro in 2013.

In these days of less respect for police officers, I asked if he worries about being hurt, or killed.

“In the military, I saw a lot of blowing up, but I never thought about my safety. It’s the same with the police department. I don’t ever really think about that. Obviously, nobody would ever want that, but I don’t know that I ever thought about it,” he said.

“I do know this. I absolutely plan to stay in Millsboro for life. I told them, ‘If you hire me, if you take chance on hiring me, then you have me for my whole career.’”