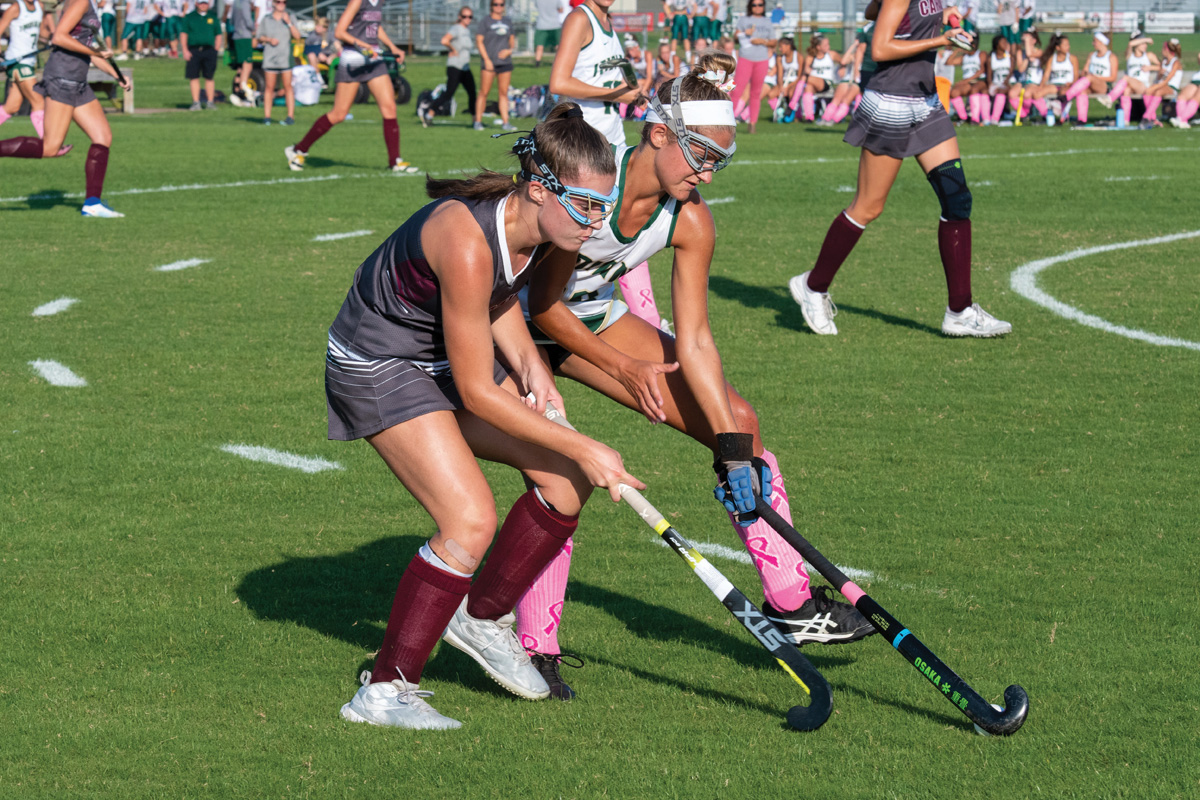 The 2019 Indian River field hockey team’s season as a whole thus far has been record-setting, to say the least.

And last Thursday, Oct. 24, another milestone was reached, following their 11-0 rout of the host Blue Jays. Nine different Indians got into the scoring column in the win that wrapped up their regular season with a school-record 14-1 overall mark.

That, coupled with their 10-0 start to the season, has positioned the Indians to be among the top seeds in the upcoming DIAA Division II state tournament. Their actual seeding will be announced this weekend.

Against Seaford, the Indians wasted little time getting things going, with Rylie Cordrey getting the team on the board with an unassisted goal at 28:36. Brynn McCabe followed that with a goal of her own just 26 seconds later (with an Emma Ruley assist).

Ruley then got into the action with the first of her two goals at 22:11, which was unassisted. Less than two minutes later, Kayler Townsend scored her team-leading 19th goal on the season.

Senior Avery Congleton found the back of the cage at 18:54, off an assist from classmate Kaylee Hall, and Ruley added her second of the game exactly four minutes later, thanks to a helper from Congleton.

Freshman Kinsley Hall picked up a pair of goals within the final two minutes of the first half, to make it 8-0 in favor of the Indians, with McCabe assisting on Hall’s second goal at 1:05.

The second half was a “defense moves to the front lines” opportunity, as normal defensive players Morgan McGee, Morgan Bomhardt and Savannah O’Shields all recorded their first goals of the year. Townsend assisted on both McGee’s and Bomhardt’s goals, while McGee registered the helper on O’Shields’ strike.

The Indians were credited with 40 total shots in the game, while Seaford did not even get one. IR also picked up six penalty corner opportunities in the game.

As previously mentioned, the team has been playing the waiting game, while continuing to practice and stay sharp for the postseason. Early indication is that they will likely land the No. 2 seed for the tournament, but official word is expected this weekend. A No. 2 seed would give the Indians a first-round bye, and they would then host their quarterfinal match-up against a team to be determined.

The Indian River boys’ soccer team had been on a six-game unbeaten string following their lone loss of the season, to Cape way back in September, as they headed into the final week of play for the regular season.

That run continued with a 2-0 win over Laurel on Oct. 24 but would end following a 1-0 setback to Wilmington Charter School. The team got back on the winning side with a 3-1 road victory over Delcastle on Monday, Oct. 28.

Against Laurel, Alex DiLuzio scored in the first half, at 1:20, to get the Indians on the board, with an assist from Jordan Illian. IR would score their other goal in the game in the second half, thanks to an unassisted effort from Illian.

IR out-shot the Bulldogs, 12-11, while both teams recorded three corner-kick chances in the game. Goalie Bastian Perry was credited with nine saves to earn the clean-sheet win.

In their win over Delcastle, the Indians found themselves trailing 1-0 just over one minute into the game but recovered for three unanswered goals.

Willem Lambertson tied the game up in the 29th minute with his goal, which was assisted by Blake Morgan.

In the second half, a pair of IR goals sealed the win, thanks to Omar Baker’s blast in the 63rd minute (with assists by Arturo Cruz and Lambertson), followed by Illian’s penalty kick in the 70th minute.

The team was set to close out their regular season by hosting Sussex Tech on Wednesday, Oct. 30, after Coastal Point press time this week. Results from that game can be found on the Coastal Point sports Facebook page.