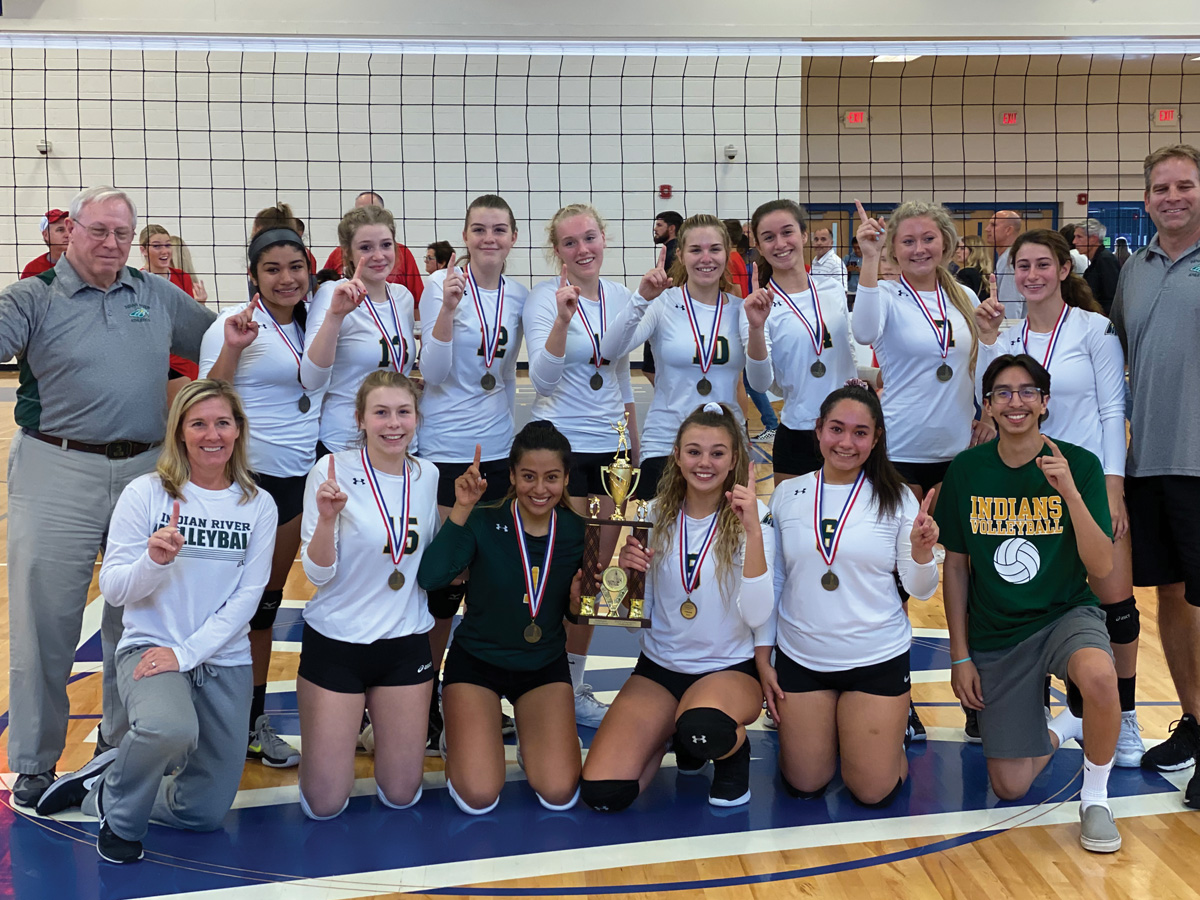 It has been an accomplishment that has eluded the girls’ volleyball program for its entire existence at Indian River High School. Sure, they had winning seasons, and have won the Henlopen Conference South Division title numerous times before … but never did they get that one thing they’ve come so close several times before — a Henlopen Conference league championship.

The wait is now over.

The Indians justified their strong and dominating conference play throughout the season with a 3-1 win over long-time nemesis Smyrna last Saturday, Oct. 26, in the conference championship match at Woodbridge High School.

The win set off a euphoric celebration for head coach Jim Barnes and his team to finally get to hoist that championship trophy into the air.

“‘Elated’ is certainly a good word to use,” Barnes said. “‘Happy’ might not be an exciting word, but I am happy for the whole program, the kids, the coaches.”

It was the second time this season the Indians had beaten Smyrna, having taken down the Eagles during the regular season by the exact same score. At that time, it was the first time IR had ever beaten Smyrna in the program’s history.

Knowing that they were facing Smyrna again — this time for the conference title — could have certainly caused some concern, but Barnes didn’t seem to think so.

“I call the girls ‘my little MOBsters.’ At the next practice, I said to the girls that I didn’t know whether to call them my little mobsters or champions, but I guess both.”

The “Little Mobsters” jumped out to a 1-0 lead in the match thanks to a 25-21 win in the first game. Smyrna recovered to tie things up in the second game with a convincing 25-15 score that could have led the Indians to think, “Oh, no — not again!”

IR erased any potential concern, taking the third game 25-19 before clinching the match with a 27-25 win in the fourth.

The Indians got strong play from their usual suspects, in junior Raychel Ehlers with 29 kills and 19 digs, as well as senior Siera Johnson with 15 kills. Freshman Camryn Ehlers showed a steady hand, with 31 assists and eight digs, while senior Jessica Amezcua contributed 16 digs. Senior Marianni Chavez had 18 assists as well for the Indians, and Cici Macedo chipped in with nine digs.

“Total team effort all around,” Barnes concluded. “Just so proud of the entire team. They’ve all been working so hard all season long to get to this point. The seniors have had several chances in the championship match, and finally got over the hump. Just cannot say enough about this team.”

The DIAA state tournament was set to get under way on Thursday, Oct. 31, with first-round games. The Indians, by virtue of their No. 6 seed, earned themselves a bye into the second round. They are scheduled to start their postseason run on Saturday, Nov. 2, at Ursuline Academy at 6 p.m. against the winner of Newark and Red Lion.

IR — now 14-2 overall and on a 10-match winning streak — had defeated Red Lion during the regular season, back on Sept. 14, by a score of 3-0, but did not face Newark this season. Results from their match can be found on the Coastal Point sports Facebook page.