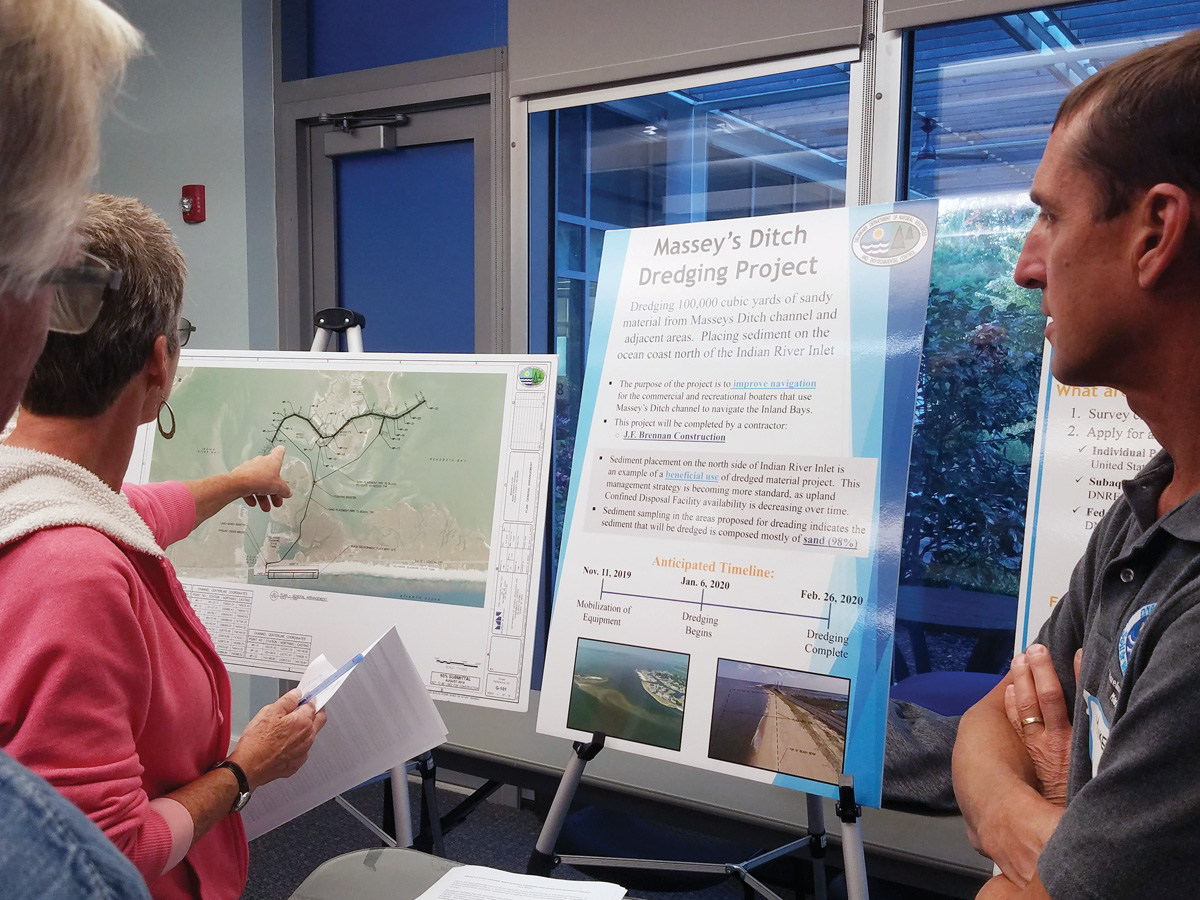 Adults kept reaching for the shiny star-shaped stickers, then placing them firmly on a large map of coastal Delaware. They were marking the most important inland waterways that they believe need dredging or ongoing maintenance.

As Delaware Department of Natural Resources & Environmental Control (DNREC) prepares to dredge Massey’s Ditch this winter, officials decided the time was ripe to teach the public about similar projects.

Residents, boaters, elected officials and others attended the Shoreline & Waterway Management Section’s first informational open house on Oct. 23 at the South Coastal Library in Bethany Beach. (Two more workshops were scheduled, for Nov. 3 at the Lewes Public Library from 1 to 3:30 p.m. and on Oct. 30 at the Indian River Volunteer Fire Company in Oak Orchard.)

How people see the bays

Since money is tight for dredging projects, the Division of Watershed Stewardship is collecting data to better prioritize the proposed projects. They asked how and where people use the channels, and how important each activity is, from fishing or kayaking to other types of work and recreation. People can rank the importance of individual waterways, as well as boat ramps, marinas, economics, safety, dredging history and more.

The public survey can also be completed online at www.surveymonkey.com/r/CFN5TCQ. It opened in summer, and the deadline is Nov. 30.

The goal is “to ensure navigation channels are kept open and safe,” said DNREC spokesperson Michael Globetti. “Once we have collected and analyzed the data for the criteria identified in the online survey, we will develop a scale and weighing factor for each and test the methodology. … If successful, we anticipate testing the methodology in other waterways throughout the state.”

For instance, in channels not marked by the U.S. Coast Guard, DNREC aids navigation by maintaining nearly 200 channel markers, including lighted buoys and reflective signs mounted on PVC pipe. A small crew must check, and in some cases replace, them all before each boating season.

Dredging has changed over the years. Small projects are still handled in-house, while larger and more complex projects are hired out to contractors. As the agency has come to better understand its environmental impact (such as fish spawning and nurseries), the window for most dredging projects was reduced to fall and winter only. The dredging staff stands at an all-time low of six staff members, having started at seven in 1970 and hitting a high count of 16 in 1990. The section also removes hazards to navigation, such as trees, shipwrecks and damaged pilings.

The dredging of Massey’s Ditch is scheduled to officially run from Jan. 6 to Feb. 26, 2020, to improve the navigation of what is considered a crucial link between the Rehoboth Bay and the Indian River Bay. The contractor, J.F. Brennan of La Crosse, Wisc., will begin mobilizing equipment nearby around Nov. 11.

“We all get stuck. That’s why you bring your boatin’ shoes, and you get out and [lift] your engine, and you push off, and you watch your tides,” said workshop attendee Deb Barber.

“I’m a boater, and so many of the inland bays are shallow, so I just wanted to see what their plans were,” said resident Deb Barber, who primarily boats in Whites Creek, Indian River and Rehoboth Bay.

Massey’s Ditch will be dredged to a width of 100 feet and a depth of 7.5 feet below mean lower low water (MLLW), which means it will be deeper during high tide. Approximately 100,000 cubic yards of material will be pulled from the immediate channel, and from adjacent areas: the entrance to Baker’s Channel, the north side of Lynch Thicket Island, and a large shoal between the south end of Lynch Thicket Island and Middle Island.

Since the dredged material is nearly 100 percent sand, it will be pumped around to replenish the beach at Delaware Seashore State Park, just north of the Indian River Inlet. This “beneficial reuse” will help protect against erosion and storm damage at a popular public beach, while protecting the Route 1 bridge roadway.

The project, which clears sand from a shoaled channel and places it on an eroding beach area, is an example of efficient and beneficial use of dredged material, officials noted.

According to DNREC, Massey’s Ditch does not compete well for the few federal dredging dollars that are available, since it has not received federal funding since the 1970s, and the State has paid for dredging there four times since the 1980s.

The Massey’s Ditch Channel Maintenance Dredging Project will cost about $3.6 million. About a third of that will come from Delaware’s Waterway Management Fund, a “lock-box” fund derived from boating fees. It has collected about $2.7 million in its first three years.

There should be little impact to boaters and beachgoers from the project, since there’s less coastal activity in January and February. A Notice to Mariners will be issued before the project starts. Only a small portion of the beach will be closed.

“What you’ll see is pipe coming under the bridge, and then it will be laid up the beach on the front side of the dune,” said Powell. “We should be able to orient the pipe so that no dune crossings are blocked by it.”

Information about the Massey’s Ditch project is online at https://dnrec.alpha.delaware.gov/watershed-stewardship/waterways/masseys....