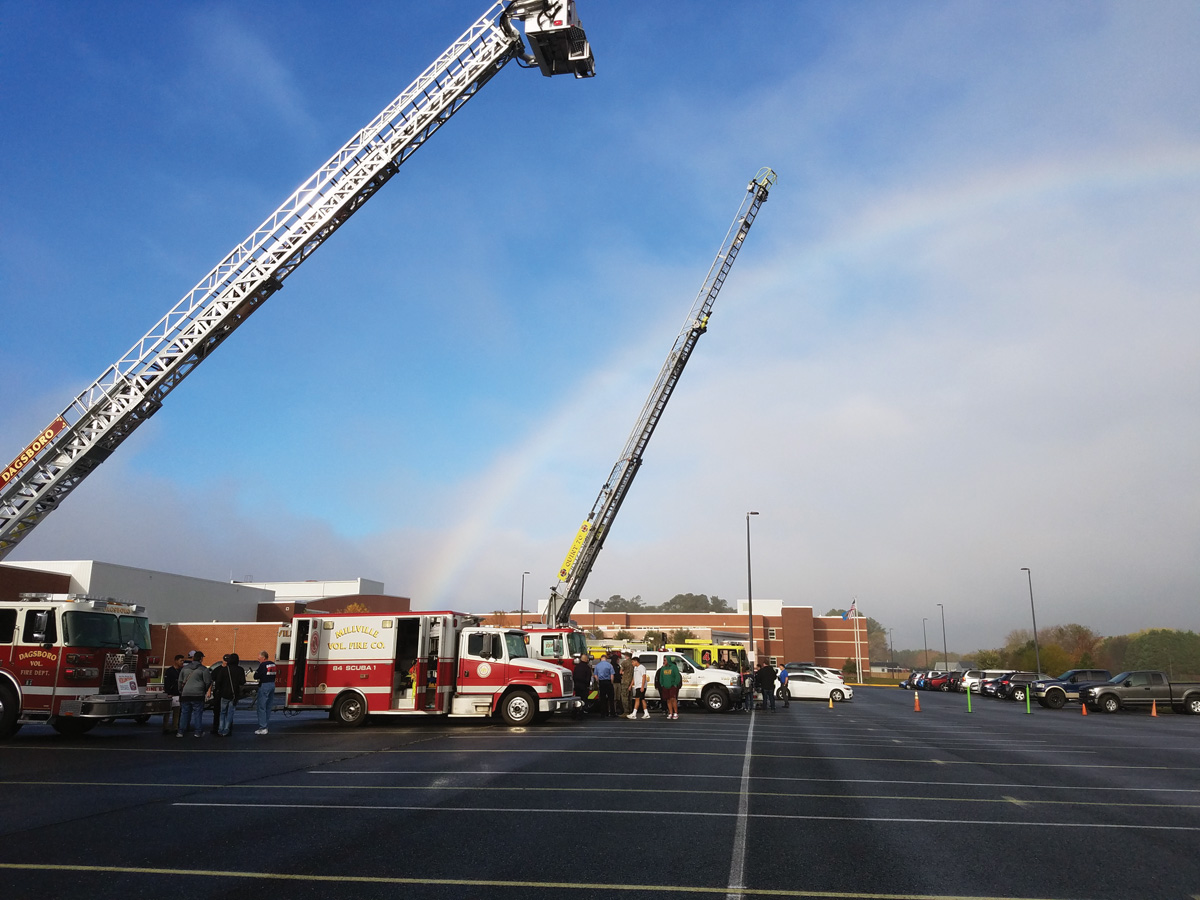 Weather permitting, every IR student would attend an assembly and then tour the firetrucks, ambulances, boats and other apparatus on Oct. 29 and 30. Intrigued, some of the teenagers did grab an application before returning to class.

“The one time you see all the companies together is usually during an emergency,” joked firefighter Mike Melson, who volunteers locally and works at Andrews Air Force Base.

Melson is an IR grad and third-generation member of the Millville Volunteer Fire Company who used firefighting as a stepping stone into the U.S. Marine Corps.

“We tried to include every student’s fire district. … We all need additional members,” said Jason McCabe, a captain at the Dagsboro Volunteer Fire Department.

Individuals do not need any experience or money to join the fire service. Fire companies provide all the training and equipment. In Delaware, most firefighters are volunteers, but many EMTs have paid positions. They can pursue specialized careers, such as wildfire or water rescue.

At age 15, junior members can actively train as firefighters or EMTs. Before that, youth can participate in non-emergency roles though Operation GEM (Gain Effective Membership).

“It’s an exciting and adrenaline-pumping way to serve your community,” McCabe said.

It’s not just students, but adults can also visit their local fire house to learn more about these nonprofit — and mostly, nonpaid — organizations. Each fire station is an independent, self-run organization.

If emergency response feels too extreme for some people, but they still want to play a role in their community, people of all ages and abilities are often able to help however they can: management, finance, public relations, cleaning and cooking. There are auxiliary memberships, too.

“Not only do we need firefighters and EMTs, we need accountants and folks to cook a hot meal on a cold winter day,” McCabe told the Coastal Point.

A nationwide challenge has been the decline in volunteerism among first-responders. Local fire companies want to better educate the public and build strong organizations for the future. That includes boosting outreach to younger members of the community. For instance, the freshmen might be intrigued when seniors wear their fire company T-shirts to school.

With fire service at the forefront of everyone’s mind, there could be a multi-year boost in recruitment. Since IRHS hasn’t hosted a firefighter event like this in years, the administration agreed to help.

“It takes a lifetime to write your legacy. Part of that can be serving your communities as a firefighter or EMT,” said McCabe, who started at age 23. “Stepping up and doing what needs to be done to make the world a better place — that’s a legacy.”

The camaraderie of the fire service is special, and similar to the teamwork of school athletics, said Dagsboro EMT/firefighter Collin Donaway in a video presentation.

“All around the community, you make a difference,” Donaway said. “It’s a good feeling” to do some good, even on the worst day of someone’s life.