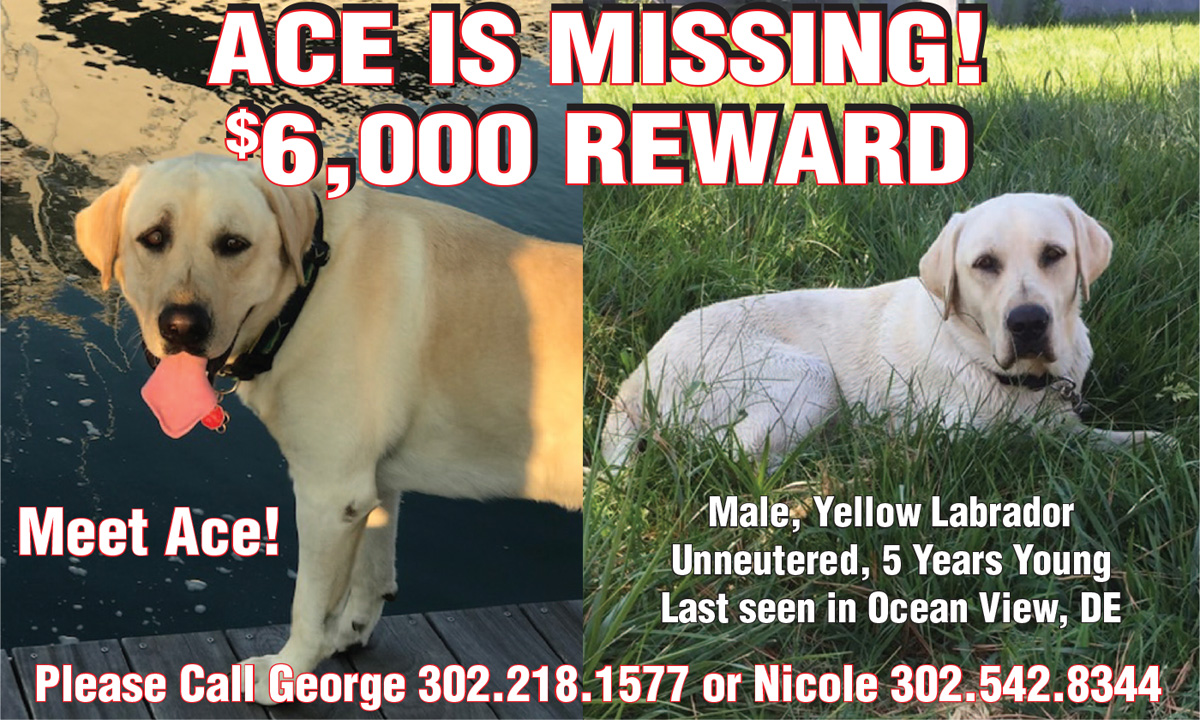 Every Sunday, Ace’s loving owners invited him to share in the family breakfast and cooked scrambled eggs for him.

“He’s slightly spoiled,” said Nicole Peterdozzi, co-owner of the 5-year-old Labrador retriever who darted out of his Ocean View house and took a run on Sept. 22, failing to return and launching an intense search by his family and thousands of good-hearted members of the public who have made signs, reported possible sightings, repeatedly checked Facebook pages for updates and even offered to increase the $6,000 reward now being offered.

“When he gets back, we’re just going to hug him and we’re going to cry. There will definitely be a lot of tears and a lot of hugging,” Peterdozzi told the Coastal Point this week.

“People tell me, ‘I wake up in middle of the night and check Facebook to see if he’s back yet.’ These are people I don’t even know. There a lot of good people out there. It’s like Ace has become everyone’s dog,” she said.

Requests to keep an eye out for the docile dog — whose other co-owner, George Elliott, first held when he was a tail-wagging 8-week-old puppy — saturate Facebook.

“I did an update on Nov. 2 and got over 30,000 responses with it, between the Race for Ace page and the group we formed to find him. Over 6,000 people are following it. We’re trying to get it out of the state, too. I really don’t think he’s here. Somebody would have seen something.

“So we’re trying to push it to surrounding states — Pennsylvania, New Jersey, Maryland. I put ads in The Guide and a money mailer. We will expand the ad to areas farther away, maybe to a ZIP code in Virginia. Some people feel he was picked up and he’s in another state. But he could be right under our noses. I just hope he’s OK,” Peterdozzi said.

The family, including Peterdozzi’s 16-year-old son and Elliott’s 12-year-old boy, are getting through their days with as much normalcy as possible, but the missing dog leaves a gnawing emptiness.

“We give him meat and broth. He likes some leftovers. He went to work with me every day. It’s been hard on George,” Peterdozzi said.

Ace, who is unneutered, had taken off on runs before, but always came back, so his absence after a few days, and now, after several weeks, is heartbreaking for the family that bought Ace his own swimming pool.

Elliott, who is so close to the dog that Ace walks closely beside him, quickly offered a $6,000 reward for his return, invested in a service that calls hundreds of numbers to alert neighbors and talked to a professional dog tracker, who suggested putting out boards sprinkled with flour and marshmallows, to leave tracks if Ace walked through it.

The couple consulted psychics, including the Virginia-based Todd Segal who, according to his website, is used by police agencies and by search-and-rescue operations around the country.

A “dog whisperer” directed questions to Ace, asking, “Are you between here and there?” “Are you here?” but to no avail.

“Another psychic made mention of him moving away from water inland, possibly with an older gentleman that lives down a long driveway. You can’t see the house. It’s a smaller house, and he is feeding him human food and his tummy is upset. But we still haven’t found anything,” Peterdozzi said a few weeks ago.

A friend erected a large sign and placed it in front of her business, Ocean View Seafood, but Peterdozzi said a Delaware Department of Transportation representative ordered her and Elliott to remove signs attached to utility poles, though they waived the fine. Peterdozzi switched to yard signs.

Ace has a brown stripe on his nose.

“His tail is round at the end, as it was injured as a pup. He is extremely loveable and gentle. We are asking that everyone keep an eye out for Ace. … He could be anywhere, since he is also a swimmer,” Peterdozzi wrote on the Race to Find Ace page on Facebook.

If the dog is returned, Elliott said he will hand over the reward money and not ask any questions.

“We have spent thousands of dollars, and we aren’t going to give up,” Peterdozzi said.

Once the dog is back home, safe and properly belly-rubbed, Elliott and Peterdozzi have plans.

“We’re going to have a party,” she said, “because I know there are an awful lot of people who want to meet Ace.”