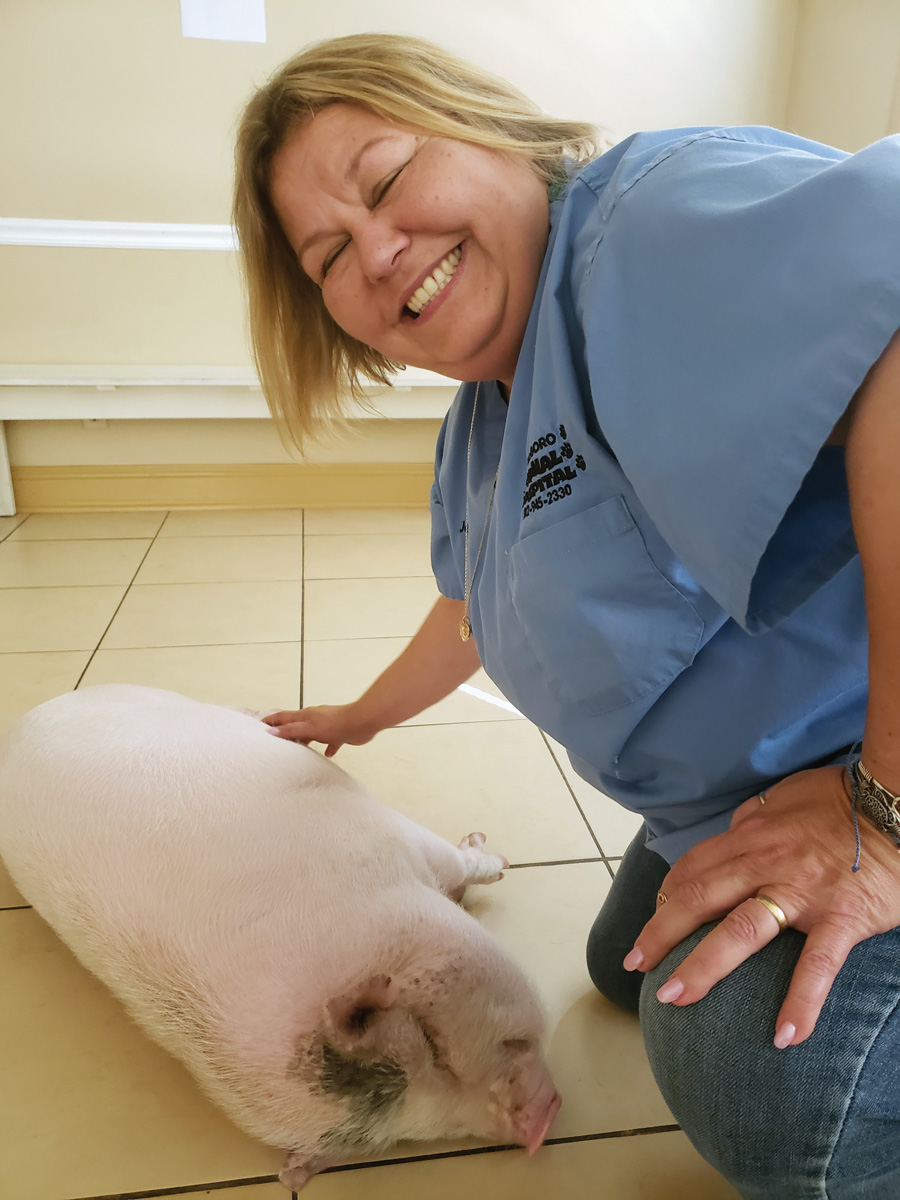 Some little piggies go to market. Some stay home. And one is in hog heaven, living at the Millsboro Animal Hospital, where he snacks on sun-ripened cherry tomatoes from a silver bowl and lies on his back for belly rubs.

Known as Mr. Pickles, he was caught by veterinarian Dr. Misty Wright when he weighed only 2 pounds, after she and a few co-workers visited a local farm to take home a baby pig and make it a beloved pet. It wasn’t easy catching one among 10 running, squirmy piglets, but Wright managed.

“Everyone here wanted a pig,” said Betty Jannuzzio, practice administrator at the animal hospital, who shared her home with Mr. Pickles for a while. But the pig, named for an anime character that veterinary technician Tim DiLettro likes, started to grow.

Jannuzzio and her husband had recently had the walls in their home painted, and her husband wasn’t pleased with the marks Mr. Pickles was making with his teeth and nose, marring the fresh paint. So, four months ago, when he was a babe of 3 months old, he became a willing and content resident of the animal hospital on John J. Williams Highway.

Although some dogs that go to the vet bark at him, the pig isn’t a bore but gets along well with others. Mr. Pickles, who sleeps on a metal shelf and alerts caretakers when he needs to go outdoors, visits with dog and cat owners — especially those who are nervous about a sick animal or heartbroken as they say a final goodbye.

Staff members gauge how patients are feeling and, when it’s appropriate, send Mr. Pickles into the examining room to soothe and cheer them.

“He visits with people, if they want pig time. They take one look at him and can’t help but smile. Who can help smiling when they see him?

“He makes me happy. A lot of people don’t take into consideration how many times a day we have to say goodbye to somebody else’s pet, so when we come out and he’s there, it is comforting. I don’t know if he knows the good he is doing or not,” said Jannuzzio, who, appropriately, is particularly fond of the children’s book “Charlotte’s Web,” about the touching friendship between a pig named Wilbur and spider named Charlotte.

“When he was at our house, we put the movie ‘Babe: Pig in the City’ on for him to watch,” she said.

Weighing 88 pounds, Mr. Pickles was neutered and vaccinated by Wright, who also trims his teeth and hooves. He has a children’s swimming pool to roll in and comically blows bubbles.

“He is very sweet, such a gentleman,” Jannuzzio said, adding that pigs live about 18 years. From home, she uses a camera to watch and talk to the brown-eyed pet, who sometimes has a curly tail and other times holds it straight.

He won’t grow taller but will develop a larger belly. Fed 2 cups of pig-food pellets daily, he also snacks and isn’t easily satiated. He likes lettuce, watermelon, tomatoes and cucumbers, even dry cereal, and has a special fondness for Twizzlers licorice.

“He is definitely food-driven. We have a client who brings him apples and carrots,” she said, as Mr. Pickles sniffed an amused visitor’s pant leg and attempted to nibble on the tassel of her shoe.

“He is like a child. He likes to steal cellphone cords and run off with them, too.”