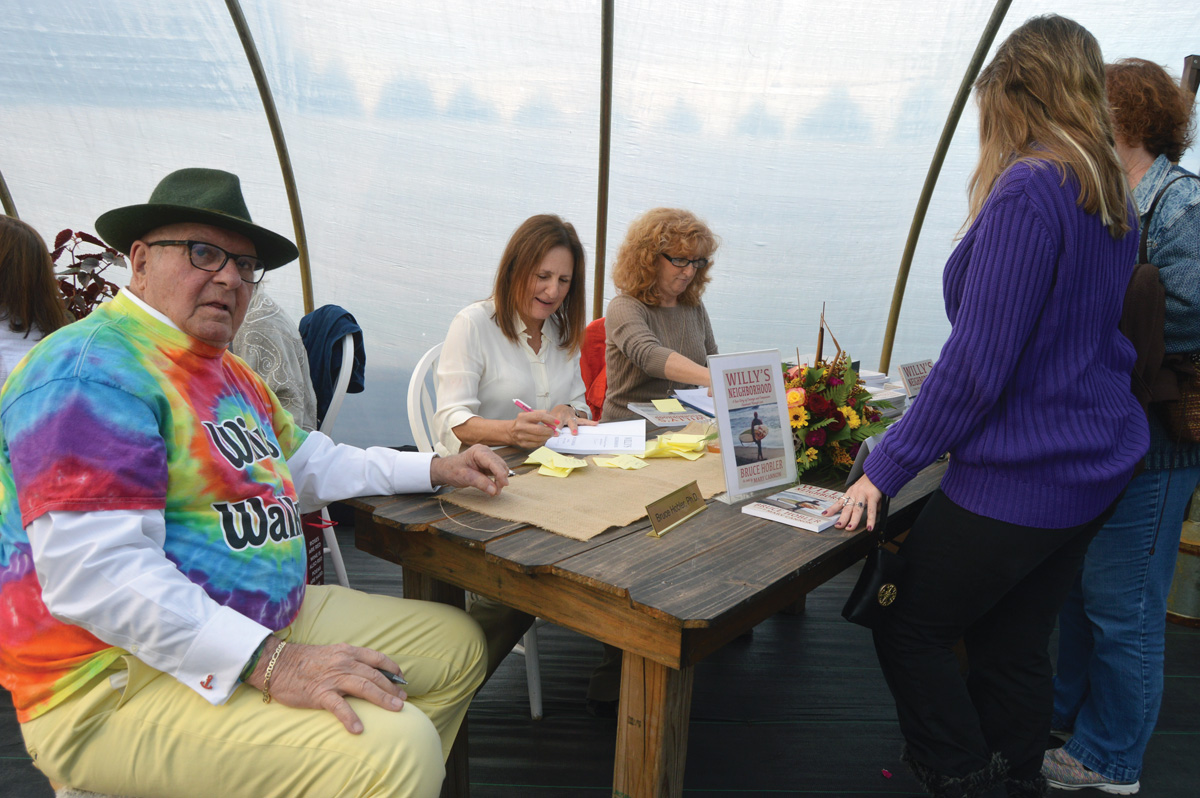 On June 8, 2010, Willy and Mary Cannon sat in a doctor’s office and heard words they couldn’t even process: “Willy, you have ALS…there is no cure…you are going to die.” The Cannons, however, were not ready to accept such a dire prognosis.

“Let’s get out of here,” they said to each other, and they headed for the Fenwick Island beach that had been their refuge since their relationship began.

The next five years would take the Cannon family — Willy, Mary and their teenage children Emma and Sam — on a journey no family wants to take. Willy, who was already experiencing difficulty with speech and movement, would decline physically as the disease took over his body. In the beginning, he was treated for chronic Lyme disease — doctors felt the tick-borne infection had settled in his brain. But two years after the first doctor’s ALS diagnosis, it became clear through advanced testing that indeed, ALS was attacking his nervous system.

For those who had known him before the ALS — an acronym for Amyotrophic Lateral Sclerosis — hit, the wasting of his body was hard to accept.

Throughout the ordeal, however, Willy Cannon’s spirits remained strong and were a source of inspiration for his family and friends.

A new book, written by family friend Bruce Hobler based on his conversations with Mary Cannon and others, tells the story of Willy’s journey with ALS — and of the strength of love within a family and a community that jumped in to help in myriad ways — which evolved as Willy’s illness progressed.

The self-published book, titled “Willy’s Neighborhood,” is named after the network of volunteers that worked to ensure that Willy and his family could make the most of every minute they had together, from his diagnosis in June 2011 until his death in February 2015.

“Willy’s Neighborhood” weaves together recollections from Mary Cannon as well as some of the people who became the core of the volunteer group. It also serves as a 138-page thank-you note to those helpers, as well as a tribute to Mary and Willy and the home they had built.

“It blows my mind how much people did for us,” she said.

The name Willy’s Neighborhood was the result of impromptu brainstorming between Mary Cannon and her friend Pat Hendrickson when they went to the bank to set up an account for donations, she said.

Despite his eventual paralysis, Willy was able to attend two of son Sam’s state soccer championships; he was able to enjoy some time outside and at the beach that he loved. A lifelong surfer, Willy struggled with his inability to surf as his illness progressed; it had always been his refuge from troubles.

On the cover of “Willy’s Neighborhood,” a wetsuit-clad Willy Cannon strides along the ocean shoreline, surfboard slung under his right arm, flashing a peace sign with his left.

Readers, who came to visit Willy several times a week, enabled him to escape his body in which he was imprisoned by the ALS. Hobler was one of eight who read to Willy regularly, continuing to do so for three years,  until the month before he died.

Hobler went to the Cannon home to read to Willy twice a week — every Monday and Thursday at 10 a.m. “At first I read sports,” Hobler said, but soon he was delving into books that Mary chose because she knew what Willy would have been reading if he could do it himself. Known to hundreds of families as “Nurse Mary” because she was a school nurse at Lord Baltimore for many years and then at Howard T. Ennis School, Mary said she was too exhausted at the end of a day caring for Willy to read to him herself.

“It was very important to find someone to fill this huge part of his life. That was something that was just huge to Willy,” Mary said. “That was something he would look forward to every single day, was the next time someone would read to him.”

Mary said Hobler has “one of those storyteller voices” that made listening to him read a pleasure. In fact, she said, one of the nurses who cared for Willy would make sure she had her tasks finished before Hobler arrived so she could sit and listen to him read.

Other members of Willy’s Neighborhood helped by bringing food for the family, by taking care of things around the house that needed attention, or by organizing fundraising events. The whole effort came to be organized by a web site called Lotsahelpinghands.com, Mary said. The web site also made it easier for the Cannon family to communicate with all the volunteers with updates on Willy’s status.

A contractor in the Ocean View area for years, Cannon had built the family home off Beaver Dam Road in the early days of their marriage, with design help from his friend John Hendrickson. He paid particular attention to the design of the kitchen, Mary Cannon said, because he was the main cook in the family. These days, she said, one of her regrets is that she didn’t write down his recipes.

She takes great comfort, however, in the fact that, with the help of Willy’s Neighborhood, she was able to care for Willy at home as his illness progressed. “Because I was (a registered nurse), I felt like I had their support,” she said of the other medical professionals involved in Willy’s care. As a former critical care nurse, Mary was familiar with caring for patients on ventilators. And as Willy’s wife, she said “I could foresee what he would need,” in ways no other caregiver could.

Four years after Willy’s death, both of his children are pursuing careers in health care, just like their mom. Emma as an occupational therapist and Sam as an exercise physiologist; he is currently looking at graduate schools to pursue his chosen specialization.

“They had to grow up real fast,” because of the strains of Willy’s illness, Mary said. Because Sam was still in high school through most of it and Emma was away at college, “they were sitting in different seats,” Mary said. Sam had the day-to-day experiences that went with life of a critically ill person, while Emma dealt with the stress of being away from the family as she tried to focus on her studies at Flagler College in Florida.

Mary said there was much discussion between herself, Hobler and the book publisher about whether to include details of their lives after Willy’s death. “We decided to end it there,” she said. But she quickly added that the “story” isn’t over, and that she will be forever grateful to the community that brought her and her family through the raging storm of Willy’s ALS fight.

At a recent book-launch party, Cannon and Hobler sought to celebrate the group of volunteers who made up Willy’s Neighborhood as much as the book of the same name.

Throughout the two-hour event, Cannon, Hobler and book publisher Lois Hoffman signed books and greeted friends with hugs and smiles, catching up on each other’s lives while Cannon and Hobler signed books. For much of the event, the line to get a copy of the book signed spilled out of a greenhouse.

Now engaged to be married to Paul DeVilbiss, a Lewes landscape architect, Mary said she has found that “life after Willy” is as much a blessing as was life with Willy. “I remember telling Pat (Hendrickson) I can’t wait till the day I can give back,” she said. “I have a strong sense of paying it forward.” To that end, Mary has now worked with several area families dealing with ALS. She also hopes the book will help others facing challenges, and will inspire its readers to have faith and to be strong, just like Willy.

Copies of “Willy’s Neighborhood” are available at $12 for black and white paperback and $20 for a color paperback, by emailing Bruce Hobler at lhobler@verizon.net. All proceeds from the book will go to the ALS Association. A public book signing is being planned for January.