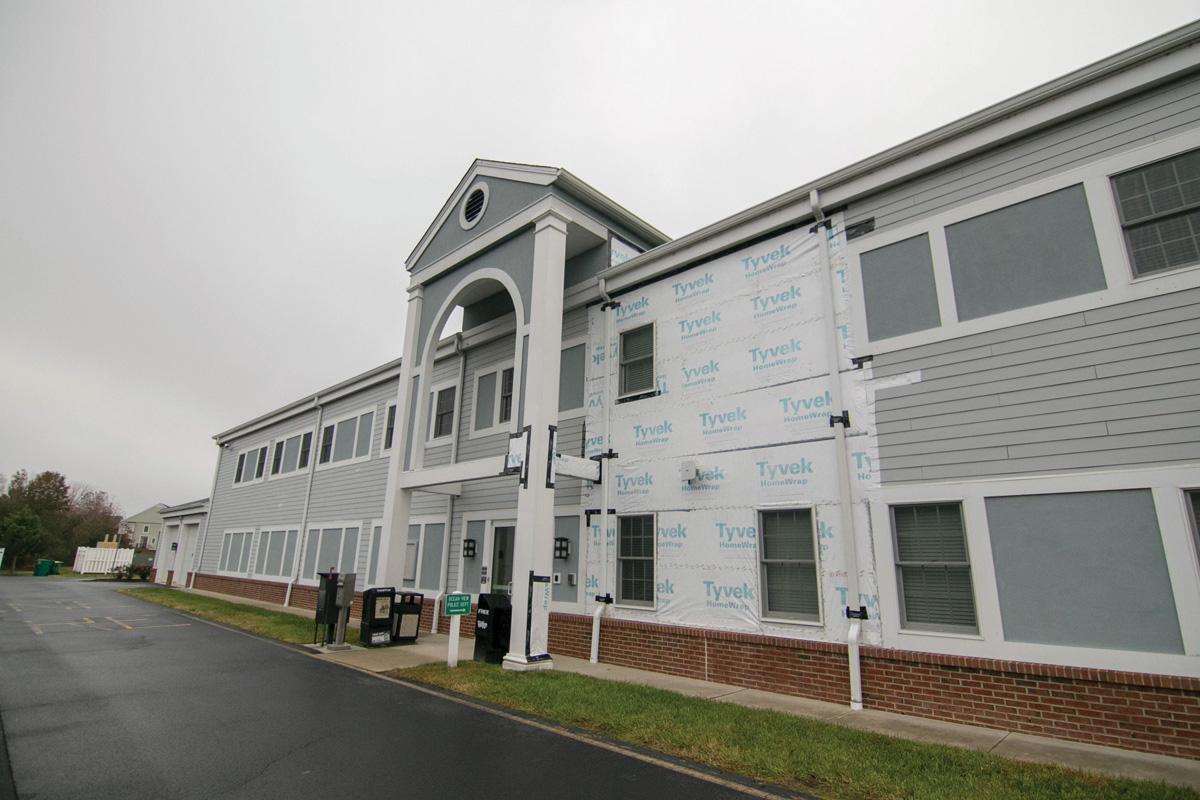 The Town of Ocean View will spend $324,000 to repair damage and to remove and replace siding on the Wallace A. Melson Municipal Building.

Because no one oversaw construction and the original siding was nailed to the concrete block with masonry nails when the structure was built 13 years ago, problems occurred, including the siding cracking, the roof having to be replaced, leaks and rotting of supporting columns.

“Now there are a lot of leaks in the roof and issues in the walls. We tried to patch the roof and found it had to be totally redone. We put a new roof on during the summer. The type of siding used was either the wrong material or the wrong method. Now, unfortunately, we are paying the price for this,” Curran told the Coastal Point.

“They had to rip off some areas of siding to inspect the damage. They noticed the paint was peeling off the planks outside. Some material inside deteriorated. They caught it in time, but in some areas, water infiltrated to the first floor, to the police department area.

“The attic area and vents will be changed so birds can’t get in. We have to work with the solar panel company to have the panels removed and put back on. It will mean a better appearance and better insulation once it’s all finished,” she said.

The building, at 201 Central Avenue, is named for a police officer who died while on duty.

No municipal files or documents were damaged or lost as a result of the damage, and no town employees will have to move out while renovations are done.

At the Nov. 12 town council meeting, Houck told council members that two sealed bids for the repair work were received and opened on Oct. 29.

One, from Ocean Tower Construction, was disqualified because nothing was included but the bid sheet, with no bid bond or other necessary certifications sent.

All States Construction Co., based in Bishopville, Md., was “fully responsive and we have strong confidence in their ability to perform,” Houck said.

Money to make repairs is in the Town’s reserve fund, Houck said. The Town will receive a $12,000 discount if work begins around June 21.

Councilman Bruce White asked how they can be certain problems won’t reoccur.

Bob Wheatley of the Whayland Company, a construction management business based in Laurel, who attended the town council meeting, said that during inspection, the nailing errors were discovered.

“This is not an application I have ever seen before, and it is not one recommended by the manufacturer, but it is what was on the architect’s drawings,” Wheatley said, calling it an inappropriate use of a product not designed to be applied the way it was.

There is no risk if work is delayed a few months because the product that will be used to apply the new siding is weather-sensitive, so workers would have to start and stop if temperatures were fluctuating.

“If you’re in a position to wait, it might be a good idea. If we start the end of June, there won’t be temperature considerations. You can’t put this product on if the temperature is 40 degrees or lower. It has to be 40 degrees and rising to apply safely,” he said.

Wheatley said work should be completed in two or three months.

“The contractor will give me colors to choose from. It will probably be an earth tone, because we have a green roof,” Houck said.