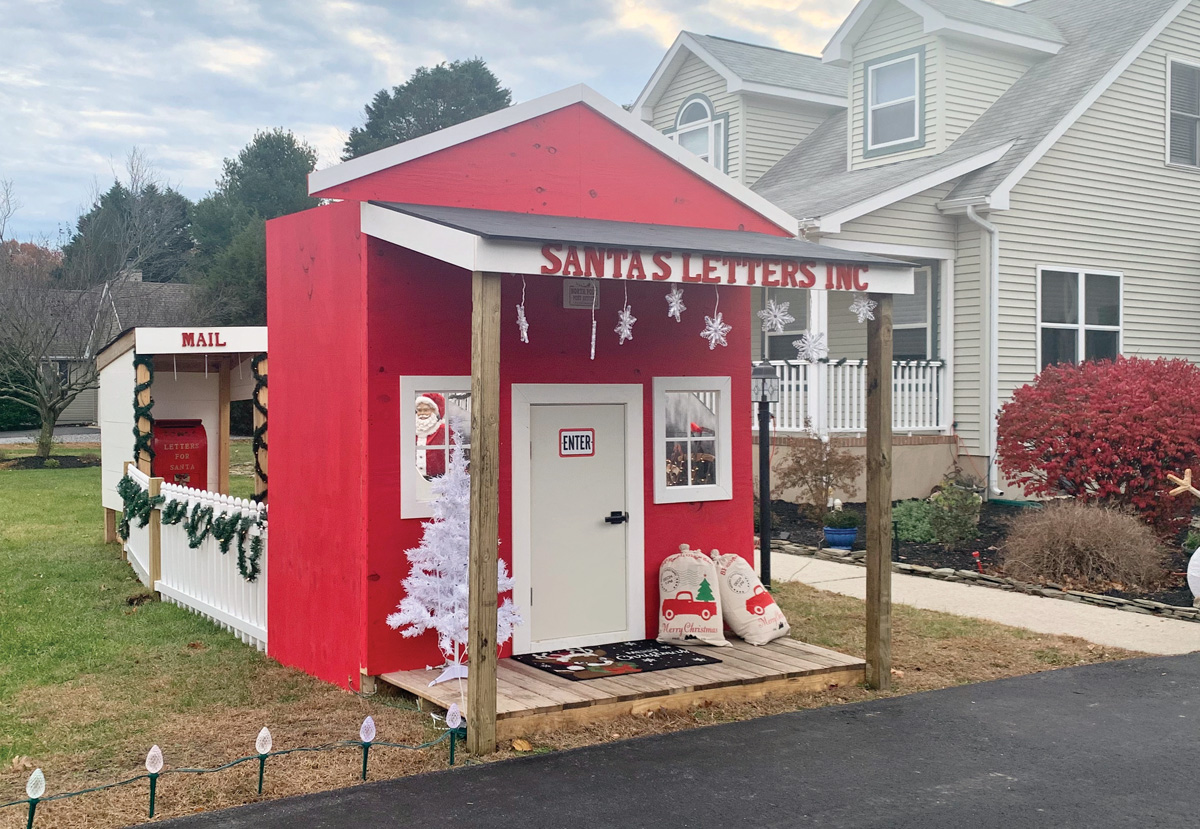 The mailbox is up!

Those who followed the story of Santa’s Letters last year will know exactly what that means. A Dagsboro family — Kristina, Sean and Jackson Malone — have again activated their charity, Santa’s Letters, which last year cheered hundreds of children with letters from the Big Guy.

But that’s not all Santa’s Letters did. According to Kristina Malone, in addition to the 300 letters they responded to, the family filled stockings for 40 area children and assisted nine families with urgent needs at holiday time.

That was all from their home, where the mailbox Sean Malone found at a hardware store became the hub of the Malones’ efforts to make a difference in their community. Five years earlier, Sean Malone had found himself answering letters to Santa as a U.S. Postal Service employee — so when he found the mailbox, he knew he had to make good use of it.

This year, there are more locations where the community can launch a letter to Santa and have it answered by the Malones. There will be Santa’s Letters mailboxes at Myriad Toys & Gifts in Dagsboro, another at the Vogue salon on Route 54 west of Fenwick Island and one at the Selbyville Public Library.

There will also be smaller “mailboxes” around the community, meant to collect monetary donations to help the Malones help even more community members this year. Those will be located in area businesses, including Rita’s Ice in Bethany Beach, Studio 26 in Ocean View and Dagsboro Days coffeeshop in Dagsboro.

Malone said some of those businesses will also take small items to be used to stuff the stockings. The stockings, she said, go to local families in need.

At this moment, Malone said, “We just want to get the word out” that the mailboxes are up. The one at their home is even more noticeable this year, since her husband built a “house” façade for it, which is lighted at night — all the better for little letter-writers to see. The mailbox display also plays holiday music, she said.

The Malones are also seeking referrals of anyone who needs help meeting their family’s needs this holiday season. Malone said anyone can offer the name of a family they know who might benefit from some assistance. Santa’s Letters can be found on Facebook, at their website at www.santaslettersinc.com, or by calling Malone directly at (215) 880-2606. Santa’s Letters fans can also follow them on Instagram, at @santaslettersinc.

Malone said the family is hoping to help even more families this year and send even more letters.

“The fact that we had a couple of fundraisers helped a lot,” she said, referring to a spaghetti dinner and a “Christmas in July” event held earlier this year.

A board of directors has also been assembled this year, which will help with organization and effectiveness, she said.

While Malone emphasized that Santa’s Letters can’t necessarily fulfill the wishes that children make in their letters, she promises a “positive, uplifting letter” will be send to each child depositing a letter in one of Santa’s mailboxes.

On Saturday, Dec. 7, Santa’s Letters will have an event at Parson’s Farm Market. From 10 a.m. to noon, visitors can enjoy a hot-cocoa bar, and there will be a table for children who wish to write letters to Santa. Also, Parson’s Farm will be donating 20 percent of all Christmas tree proceeds that day to Santa’s Letters.

Also at the Parson’s Farm event, the Malones have teamed up with the Lord Baltimore Women’s Club, and will be collecting new socks and gently used children’s shoes that will be given to homeless and needy children in Sussex County.

The Malones’ Santa’s Letters mailbox is located at 2 Windward Way, Dagsboro. Anyone who is unable to reach a physical Santa’s Letter’s location is welcome to mail their letters to that address.