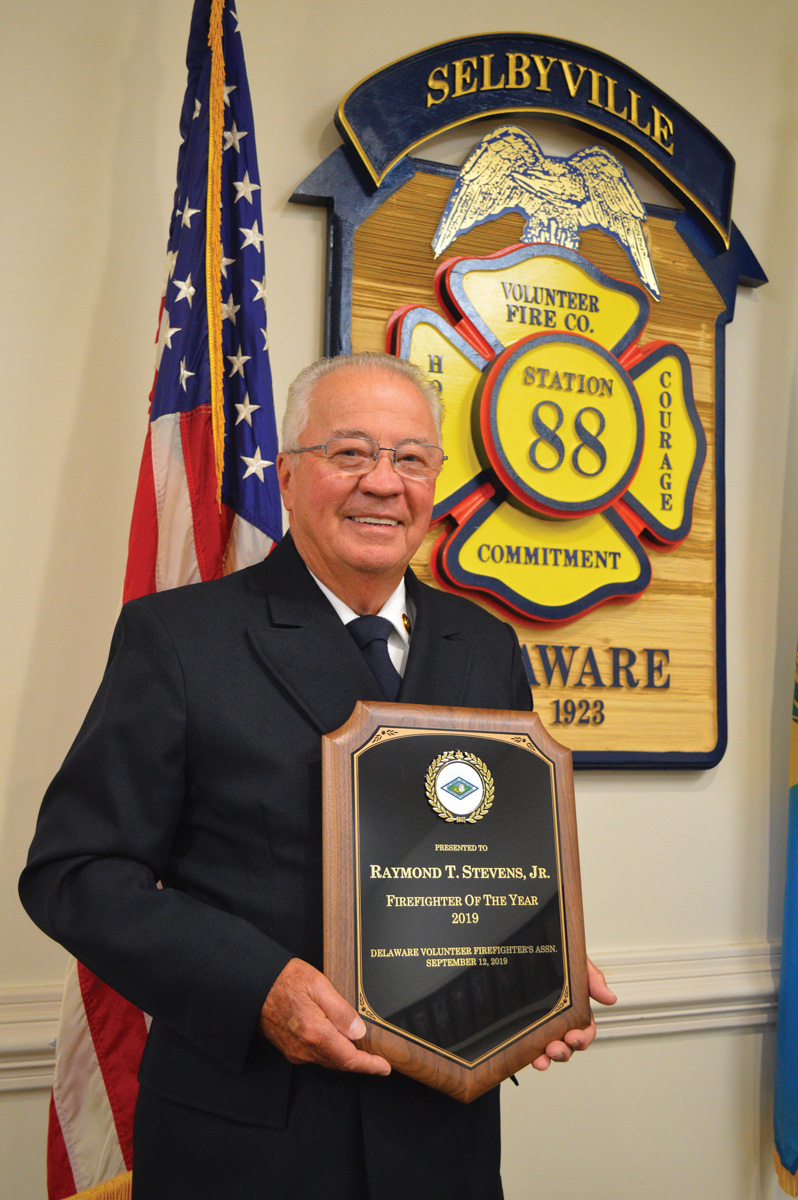 For Raymond “Ray” Stevens Jr., fire service starts and ends with “a desire to help people.”

“We help people from all walks of life, all races, colors — doesn’t matter where you’re from,” Stevens said one autumn morning at his home station of the Selbyville Volunteer Fire Company.

At age 75, Stevens was recently named statewide Firefighter of the Year at the Delaware Volunteer Firefighter’s Association 2019 conference.

He joined in his early 20s, when firefighters actually rode on the back of firetruck, standing on a wide bumper, attached to the truck only by a loose belt.

“I joined the fire service because I wanted to serve the community and, back then, the excitement of jumping on a firetruck and rushing to the fire scene and actually helping a neighbor or some stranger … [it was] just a willingness to help,” he said.

More than 50 years later, he was honored for a lifetime of dedication to the Selbyville and Delaware fire services.

“Ray is a very dedicated member of the fire service community and is always willing to go above and beyond in assisting with any tasks,” wrote nominator Doug Hudson, former president of the SVFC. “Ray’s dedication to our community is second-to-none, and the Selbyville volunteer fire company is honored to recommend Ray for this award.”

Growing up just a few doors down from Selbyville’s former Duke Street station, Stevens had a front-row seat to the action.

“Even during the night, if the whistle went off, I would get up and travel down to the fire house to see the trucks leave … and go down the street,” he said.

He joined the SVFC in 1967, took fire training at the Delaware State Fire School and worked his way up the ranks, including time as fire chief, president and board member. He is currently the assistant treasurer.

He’s been an engineer for 47 years, helping to drive and pump Selbyville’s fire apparatus. It’s a bulky piece of equipment, especially when loaded with 1,000 gallons of water and on wet or icy roads.

“A lot of people, they don’t hear the siren, they don’t even see the lights, but it’s the engineer’s job to get the equipment and the manpower to the scene,” Stevens said, “and without that — nothing works.”

Although it’s “very rewarding” to serve one’s hometown, neighbors, former schoolmates or fellow churchgoers, “that doesn’t take away from serving a total stranger that’s out there on the highway,” Stevens said.

“As first-responders, we have to be prepared to serve everybody. … That is our duty, and that is what we pledge to do: protect lives, and property — and animals!” he said. “You save a person’s animal, you got a friend for life.”

Emergency responders don’t often get a “thank you” during the actual fire or ambulance call, he said. But neighbors will bring food during a particularly long incident, and the fire department will receive letters of gratitude.

“We see people on the worst day of their life,” Stevens said. “The worst thing is young children and babies, when you have to render aid, and they’re hurt, and they’re separated from their parents,” or they’re frightened to be taken in separated ambulances.

It can be tough to witness, even for those trained men and women.

Putting his skills to work

Over the years, Stevens has done endless legwork to improve funding of Delaware’s fire and rescue services. He served the state and county associations, as a delegate, treasurer and eventually president of both DBFA and the Sussex County Volunteer Firefighter’s Association. That was followed by a 2006 appointment to the State Fire Prevention Commission, a governing board over Delaware fire services and EMS.

He’s crunched numbers for many nonprofits, including the DVFA (and their pension committee), the Sussex County Special Operations Unit and the local Sandy Branch Tax Ditch.

“I guess this was a natural thing, as I am a retired administrative auditor [from the Delaware State Auditor’s office], and figures have always been a part of my life,” he said.

“Most recently, Ray did a comprehensive report … with the income and debt service information for all the companies,” Hudson wrote. “This information was beneficial in providing our legislators with an accurate picture of our need for additional funding.”

Fire companies still ask him to come explain the funding they receive from higher government levels.

Public donations are crucial for nonprofit fire companies dealing with regulations and expenses. Every chicken-dinner fundraiser is a labor of love to continue free rescue services.

A fully outfitted truck costs 15 times more than it once did, and the cost to outfit a single firefighter exceeds $10,000 (with rescue gear, oxygen tank and radios).

“When I first joined the company, we did not have that fancy self-contained breathing apparatus that you see on TV,” Stevens said. “We merely had a canister mask that you had to pull the tape off the bottom, and you breathed through it.

“This is one of the biggest issues all fire companies have: the cost of putting a firefighter and his equipment and apparatus on the scene,” Stevens said. “The fire service has to absorb that cost.”

Also challenging is the lack of volunteer recruitment and retention.

When Stevens was young, he was initially wait-listed, there was so much interest in the department.

“However, our younger generation is somewhat reluctant to join the ranks of becoming a firefighter or EMS attendant,” Stevens said. “We would encourage the younger generation to take that step and join an organization in protecting the same communities in which they and their families live.

“We would welcome them with open arms,” he added. “It is a brotherhood … a tightknit group. Somebody gets hurt, we try to come to their aid, financially and spiritually.”

Stevens is also grateful to the people who encouraged him to learn fire service. Now, he passes that advice forward: “Pursue your goals. Go as high as you can … and you will never forget it and never be sorry.”

He encourages young firefighters to join the county or state associations, where decisions are made that influence their local stations.

“There’s things happening beyond corporate limits of Selbyville that affect us,” he advised.

Celebrating a life of service

Fast-forward to September 2019, when the Firefighter of the Year award was announced in Dover. Stevens said he was thunderstruck by the surprise announcement. But his family — including children and grandchildren — were gleefully hiding in the wings until his name was called.

“I couldn’t hardly speak — very emotional. I shed a few tears. Later, I looked at the conference book, and I saw the names of those people” who have won the award in years past. “I was very humbled by it.”

The DVFA gave him two plaques: a larger one to take home and a smaller one for the Selbyville VFC to share his honor.

“This is probably the highest honor that anyone can receive in the state,” Stevens said. “To be recognized among 65 companies and three ambulance companies — I’ll cherish that forever.”

He is also a former Selbyville Town Council member and police commissioner; helped create the Selbyville Industrial Park; and has been a member of the Selbyville Jaycees and Salem United Methodist Church. For fun, he likes to keep active with camping, fishing, traveling and yardwork.

He’s been supported through all  this by his high-school sweetheart, longtime wife and mother of their two children — Saralee. She’s also been the ladies’ auxiliary president for the Selbyville, Sussex County and Delaware services.

“I couldn’t have done it without her. I’ll say that,” Stevens remarked. “She’s been a member of the ladies’ auxiliary here almost as long as I’ve been a member of the fire company. … When our kids were small, she was helping at the firehouse, preparing food if we had a major alarm, or cooking for the county dinners, when we hosted it. So, she’s been a major part.”

“I enjoy it, and I have enjoyed it over the past 52 years,” Stevens said. “I’ve given a tremendous amount of time to it, and I would do it all over again.”