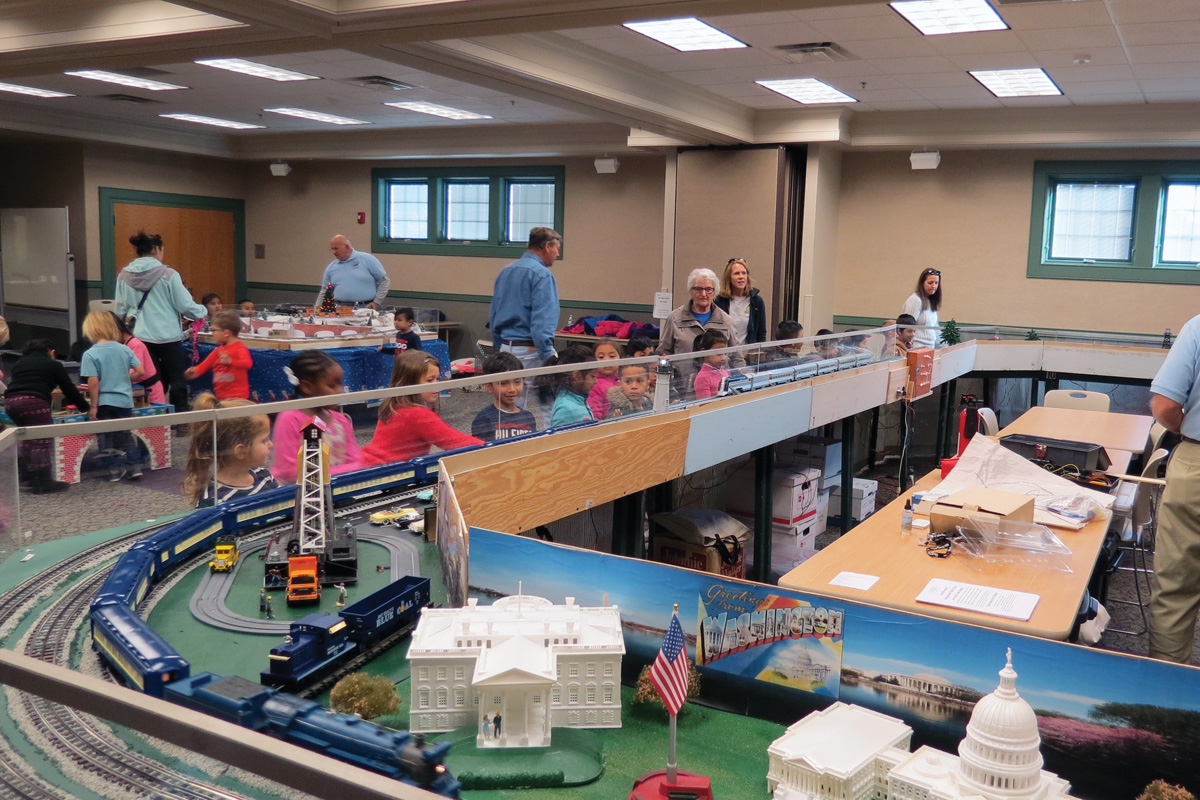 The Delaware Seaside Railroad Club’s ninth annual model train display — a mainstay of the Christmas season that signals fond childhood memories — will open on Saturday, Nov. 30, on the second floor of the Georgetown Public Library.

“People love model trains. They bring back great memories,” said train enthusiast Bill Ziegler, one of the founding members of the railroad club, adding that train lovers can enjoy the displays at the library through early January, and also see trains at the clubhouse, if they chug-chug to 32442 Royal Boulevard in Dagsboro.

The main display, about 28 by12 feet, has a circus and carnival amusement theme, with three trains running at once.

Guests can press buttons and watch scenes around the layout move, such as a Ferris wheel, bumper car or parachute jump. The other display themes are “Thomas the Tank Engine,” “The Polar Express” and a Brio wooden train and track with buildings that children can play with.

“We do this every holiday season at the library in Georgetown,” said Hodges.

“There’s a lot of activity. Several of the layouts are interactive, so people can push buttons to make things work,” said Hodges, who received a WMDT-TV Better Delmarva Award.

“Our mission is to promote the hobby of model railroading and finding activities that families can do together.

“We find some people looking to try to get back to it because there are so many electronic things kids have today, like games and tablets. When you get something you can actually feel and touch, it’s nice for kids and it’s nice for families. We have workshops. We teach kids about minor electricity and how trains work,” he said.

(Through the railroad club, children who love Thomas the train can have a birthday party with that theme. To arrange it, call Doc at (302) 539-3891.)

The club — which started in Ocean View in 2004 with four members and now has about 70 — operates with the mission of preserving and promoting the history and enjoyable hobby of model railroading.

“At the clubhouse, five layouts are running when people come in, including all gauges,” Ziegler said, explaining there are five train layouts, an S-gauge, an HO-gauge, a G-gauge and two O-gauges. And there’s a Thomas the train that, of course, children love.

Interestingly, the term “gauge” refers to the distance between the outside rails of the tracks and “scale” refers to the proportion of the model to the prototype, according to information on the club’s website, at www.delawareseasiderailroadclub.com.