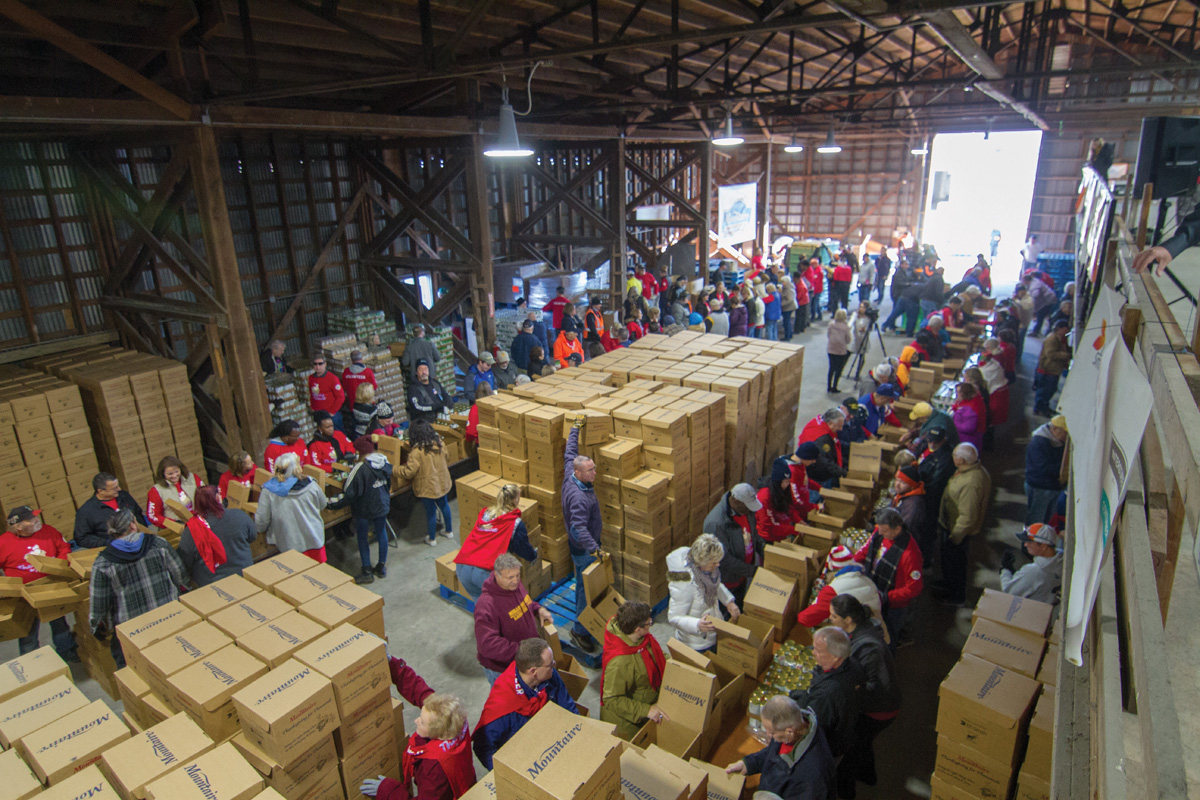 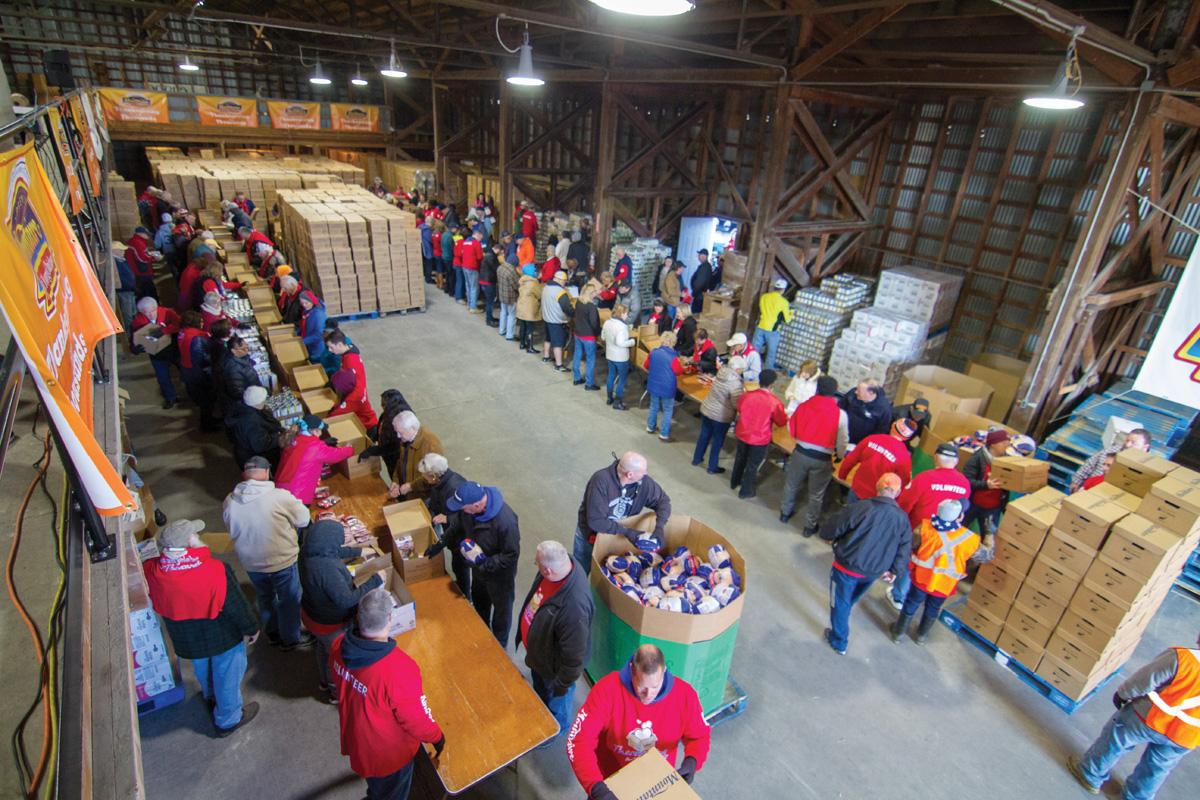 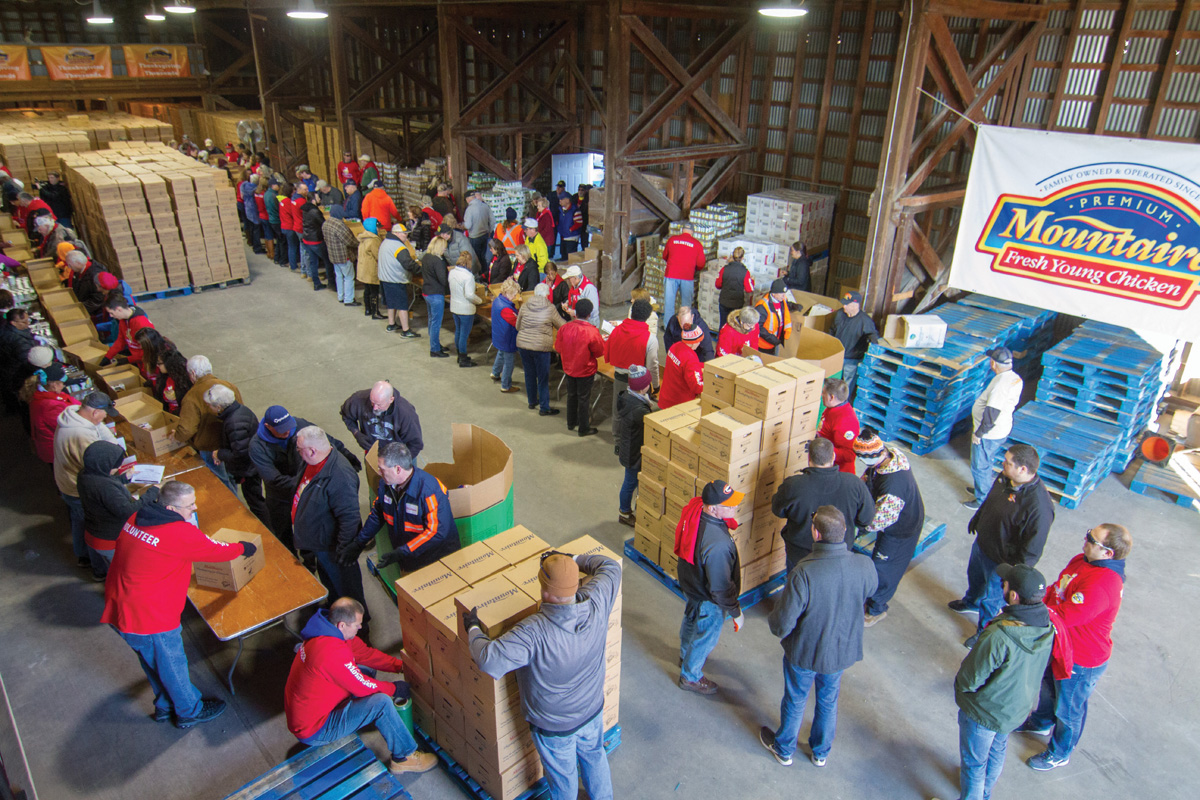 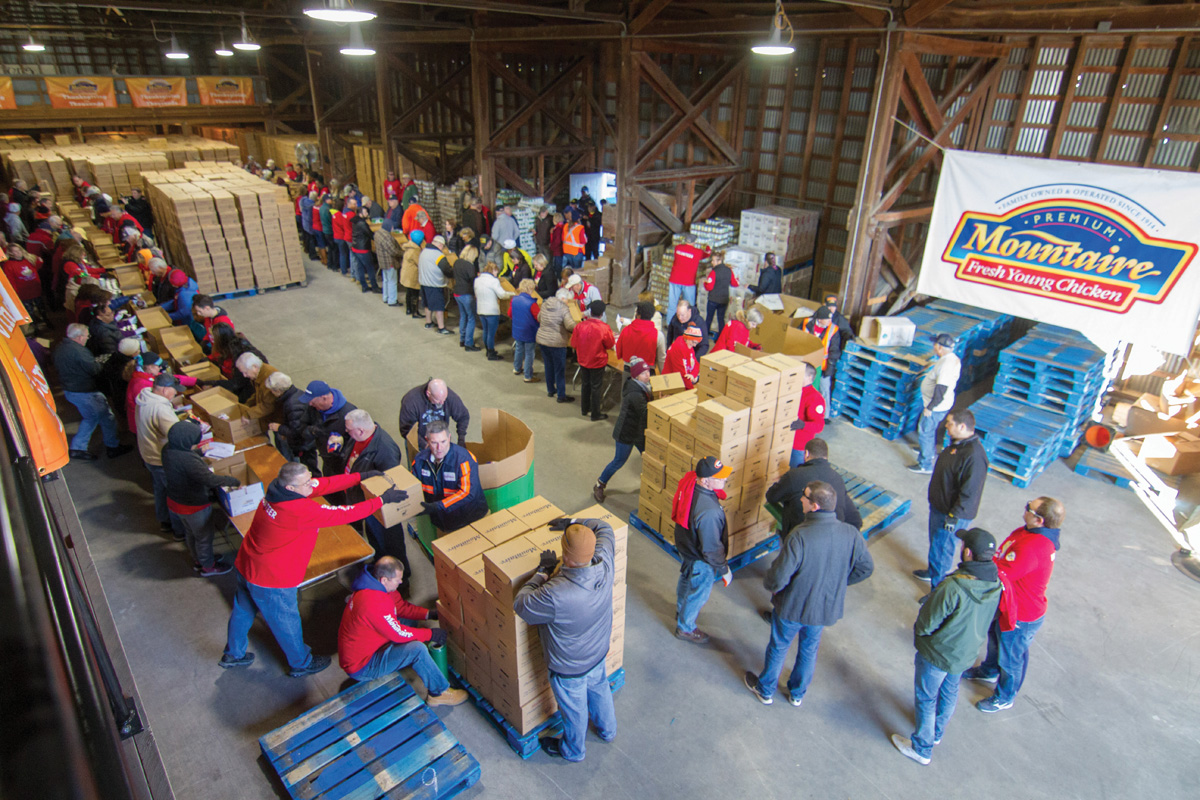 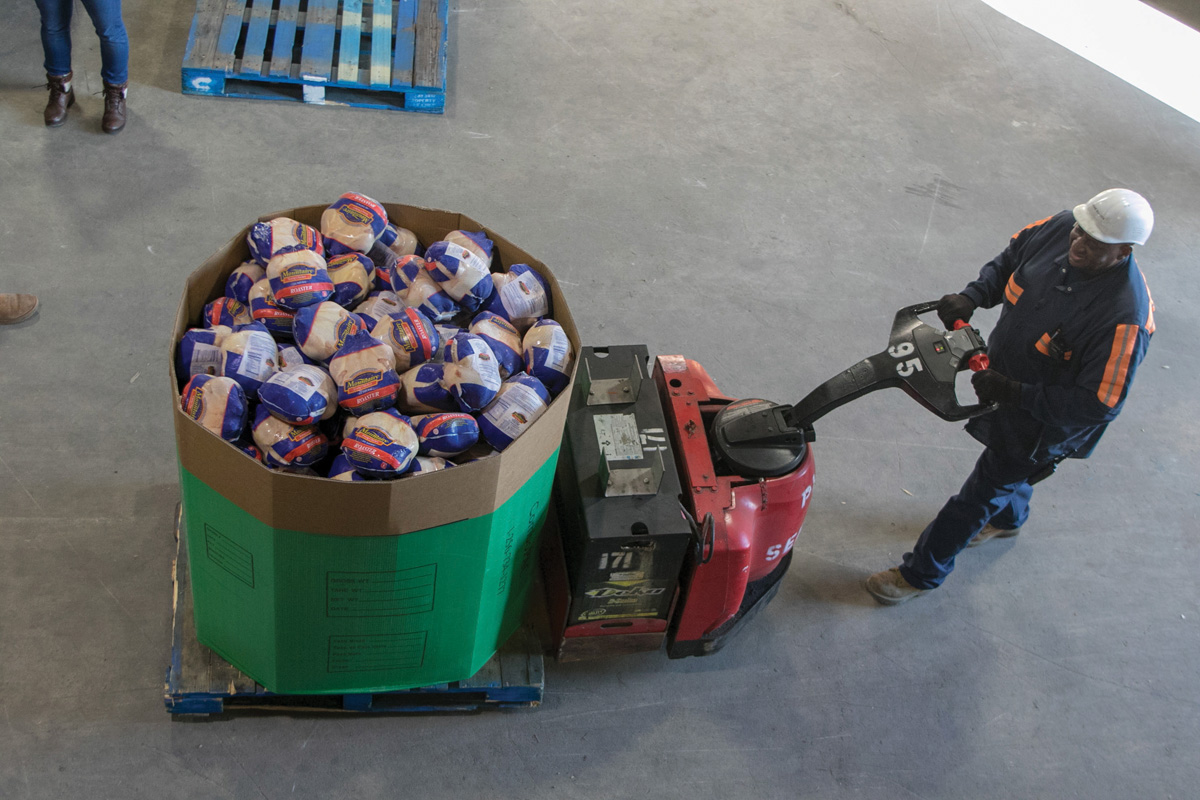 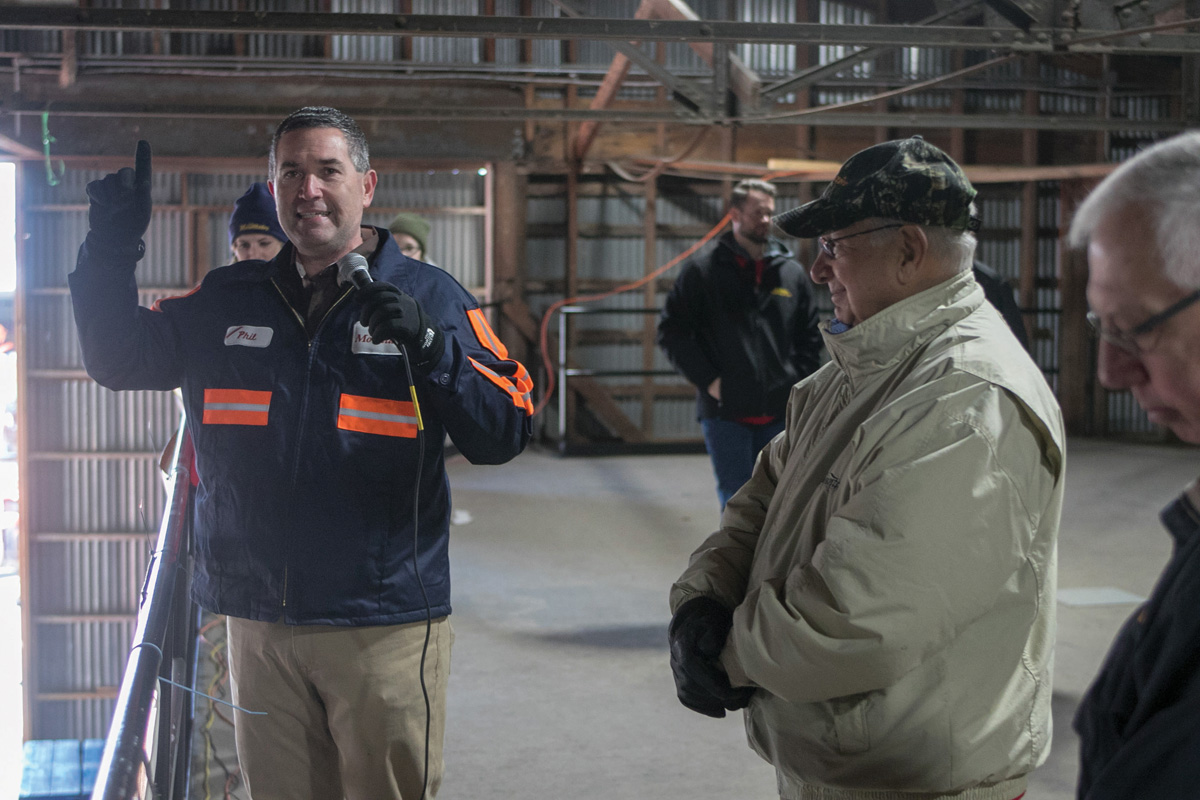 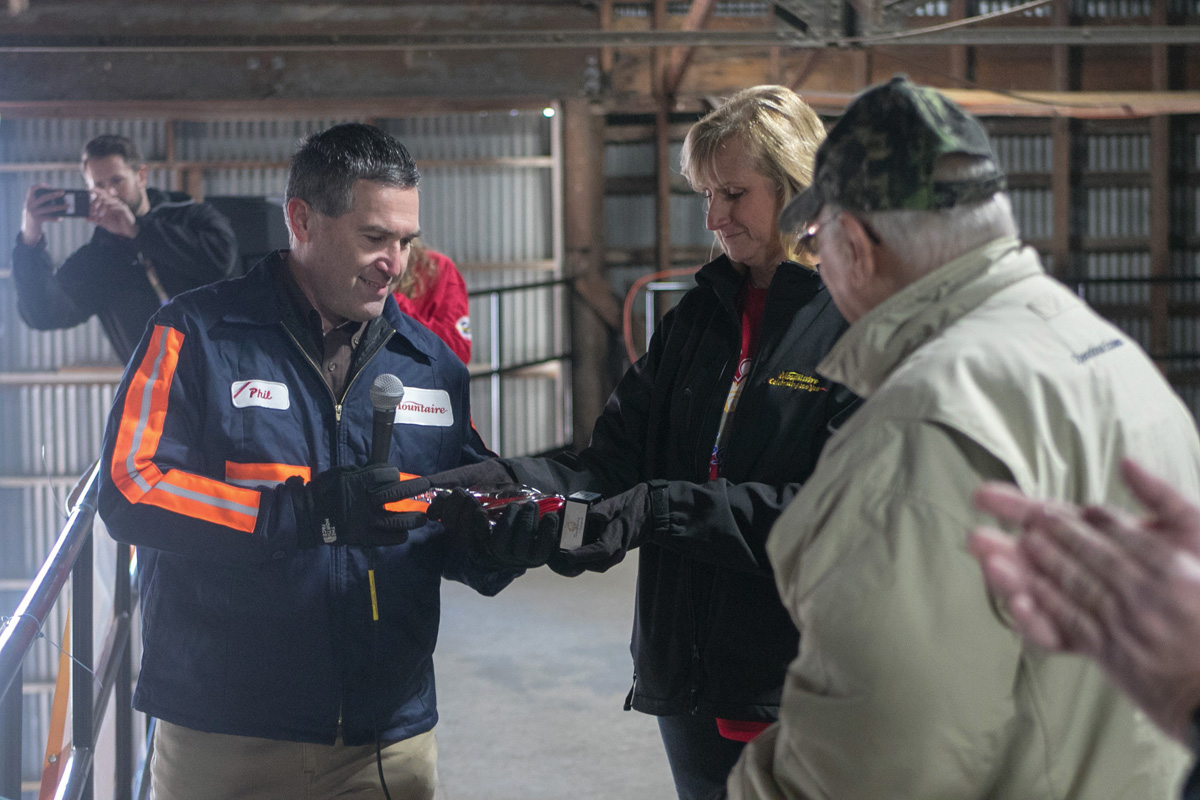 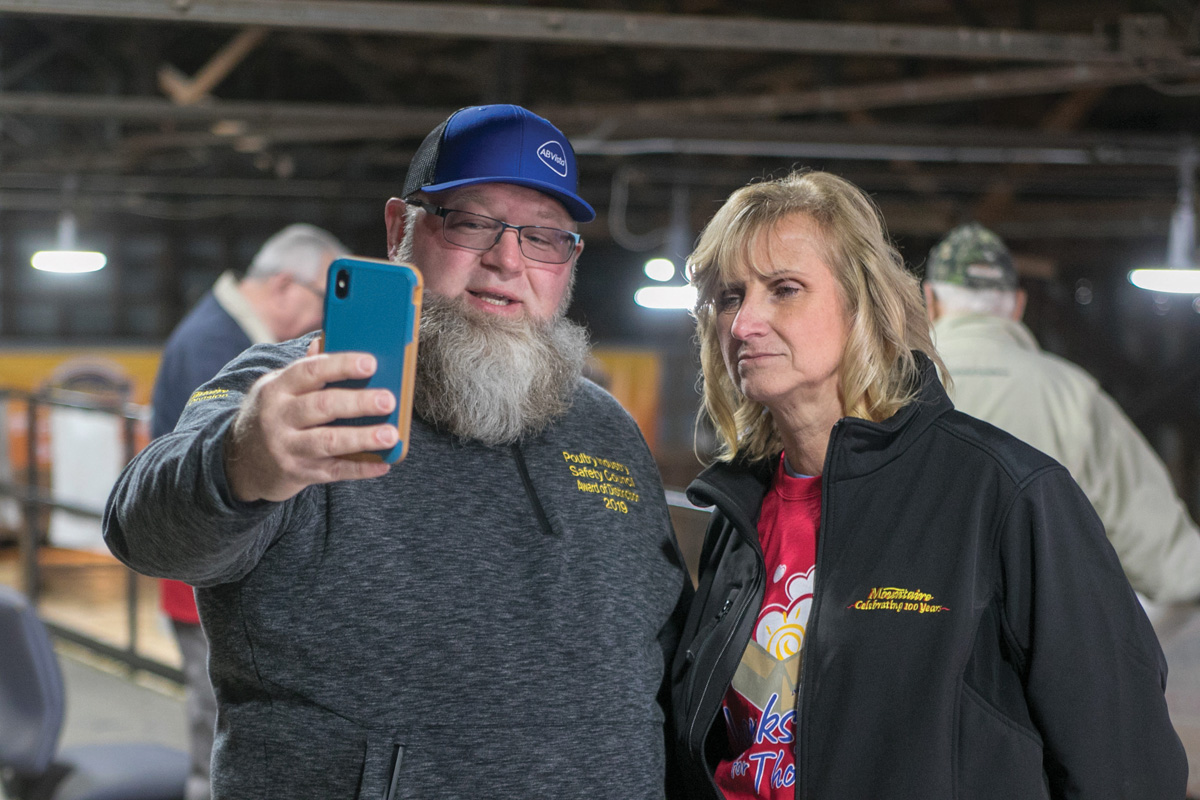 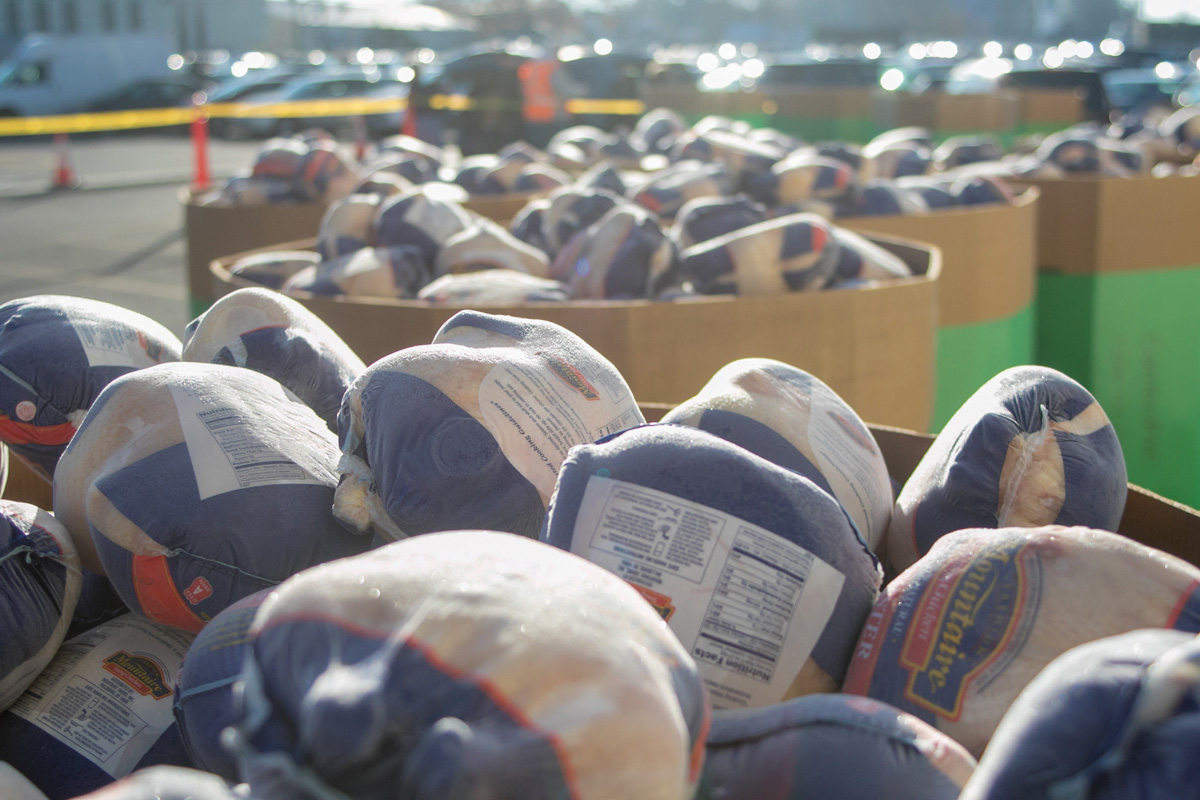 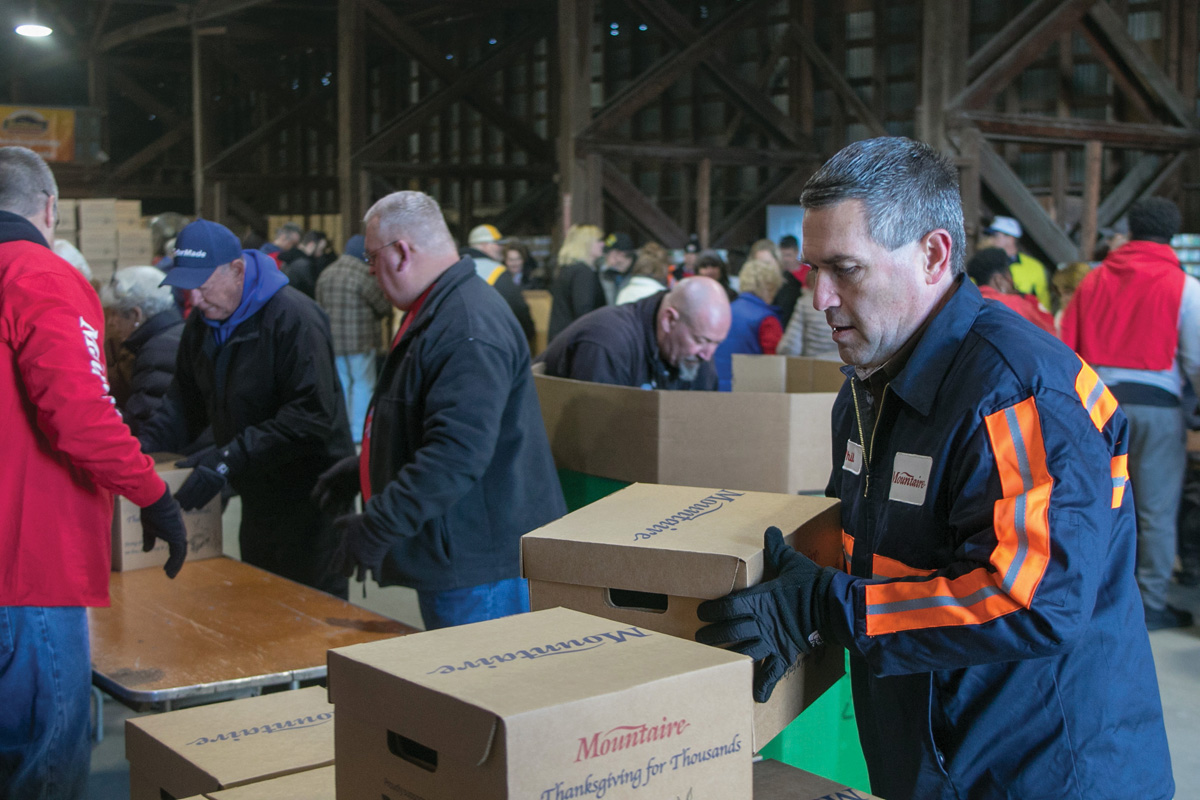 After welcoming hundreds of volunteers who arrived at Mountaire Farms in Selbyville on Monday morning to pack Thanksgiving boxes for the less fortunate, Roger Marino flashed a smile, raised his arm and said, “Here we go, folks. Start your engines.”

And they did, efficiently filling each cardboard container with a holiday chicken and traditional sides as festive music played.

A few minutes earlier, Marino, director of public relations, was surprised when Mountaire President Phil Pylar presented him with the President’s Award, to mark the 25th year Marino has organized the food drive, Thanksgiving for Thousands. About 1 million people have been fed during the years.

“We can’t thank you enough for all you’ve done,” Pylar said.

“You know what? It’s been a pleasure,” Marino replied, giving the credit to the many volunteers who return each year. He’s watched some of them grow up, he said, grinning down at them from the second level of the warehouse, where he stood with Pylar. Nearby, more volunteers worked in a tent.

Only 300 boxes were packed the first year of the drive, but the number has increased to 10,000, “all due to your help,” Pylar said.

“It’s all about making a difference,” he explained.

“It’s something that, once you do it, you don’t forget it. I live in Ocean View. I didn’t realize how many needy people there are in Sussex County. You really feel good when you’re helping people out,” he said.

Julia Turner of Milford, who works for the State’s Division of Social Services Community Partners Support Unit, returned for the second year with her co-worker Lynette Roberts.

“I like the community coming together and feeding people. So many people are homeless. Where I work, we see a very high percentage of homelessness,” Turner said.

“It’s out in the community, and that’s what we do. We know there is a need,” she said.

Pat Vallese of Dagsboro said participating in Thanksgiving for Thousands starts off the holiday season the right way.

Vallese was among early arrivals standing behind long tables in the warehouse, ready to add to the boxes moving from person to person until each contained a chicken, corn, green beans, yams, cranberry sauce, stuffing mix and brownie mix.

“Here come the birds,” Marino said as a huge box of frozen chickens was pushed in by a man wearing a red hardhat and maneuvering an industrial cart.

Marino issued a quick reminder to place two cans of corn and two cans of green beans, but only one container of everything else, into the brown boxes printed on the outside with the words, “Doing the right things where we work, play & pray.”

Boxes were stored in a refrigerated tractor-trailer Monday night, with distribution set to begin on Tuesday. Another 10,000 boxes were to be completed in North Carolina, with 7,500 prepared at the Lumber Bridge plant and 2,500 at the new Siler City location of Mountaire. Members of community groups will distribute them.

“There are more people in need now — 10,000 boxes is an enormous number when you think of all of the food inside and the fact that we put in each one a 7.5- to 8-pound roaster chicken,” Marino said.

The holiday boxes packed in Selbyville will be distributed in Delaware, but also in Wicomico County, Md., and into Virginia.

“Twenty-five years ago, I was doing community relations work with the Community Church of God, and the then-pastor told me, ‘We won’t be able to do Thanksgiving this year because the kitchen is too small.’ They were getting 100 people who came out for a sit-down dinner, but they were going to have to stop.

“I said, ‘Let me think of something.’ I came back to him and said, ‘How about if we box some food and give it to people in need?’ He liked the idea.

“We went out into the community and asked for donations,” Marino said.