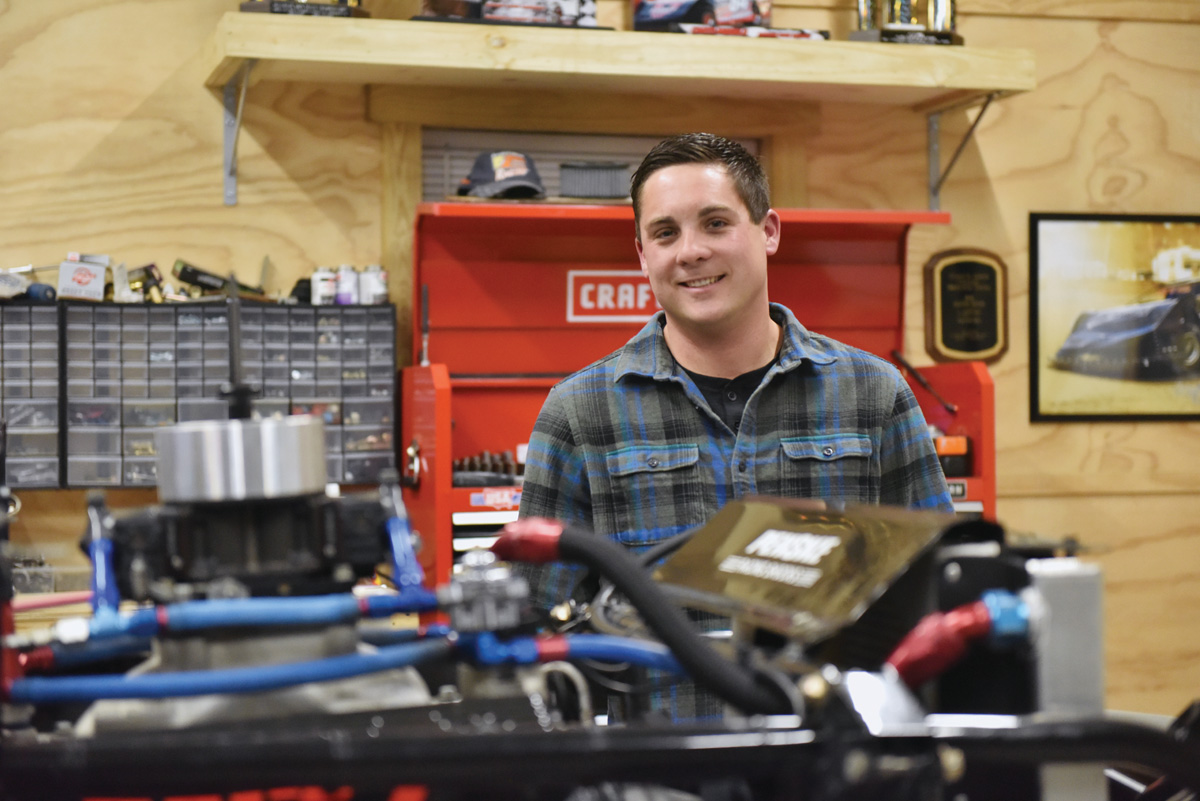 According to Matt Hill of Georgetown, four-time U.S. 13 International Speedway Sweeny Cars RUSH Late Model Series powered by Pace Performance champion, his racing career began one afternoon when he invited his mother, Judy, to ride along with him to look at a go-kart.

Later that afternoon, they returned home with the kart. Hill recalled that his father, Gary Hill, “wasn’t too thrilled about it. Same thing happened when we got the Crate Late Model,” he added with a laugh.

At the time, neither had much beyond a basic understanding of mechanics and tools, let alone knowing basic go-kart set-up procedure to make the kart drivable around the track’s fastest line for that kart.

Matt and Gary Hill got support and information from fellow Georgetown kart racers Chad Hayes and Ross Robinson, and the whole Hayes Power Kart Shop team. But it wasn’t enough.

“We struggled with the go-kart for a couple of years at Delmar,” Hill said of the period during 2007 to 2009 at U.S. Kartway and Club Milton Raceway, “and couldn’t get it to work, so we bought a Crate Late Model,” he added with a laugh. “Mom called dad after she bought one of Ross Robinson’s Crate Late Model cars and told him where to pick it up.”

While they may not have been able to get the kart to work, they’ve been fast out of the trailer in the Crate Class cars since Day 1. They’ve had them dialed in from the beginning, everywhere they go. Last season, Hill earned his fourth Delaware International Speedway Sweeny Cars RUSH Crate Late Model powered by Pace Performance title. He also recorded nine-wins on Delaware International Speedway’s half-mile clay oval and two at Georgetown Speedway’s half-mile clay surface.

“This car is fast,” said 28-year-old Hill, pointing to his new Longhorn Racing Chassis that’s taken him to Victory Lane 33 times. “I don’t know what it is about this car… It’s just fast wherever we take it.”

Hill won his first U.S. 13 RUSH Crate Late Model championship in 2012. He earned six wins on his way to that title. His final win that year was the September season-ender. Following a dicey battle for the lead, Hill narrowly prevailed at the end.

A crate motor comes from the factory sealed at the intake manifold, cylinder heads, the front covers and the oil pan, with special twist-off bolts. The seals stop skilled technicians from making changes to the motor to increase its horsepower. That, along with shock, spring and tire rules, keeps the playing field as level as possible.

“It’s definitely been a learning experience, and it’s brought my father and I closer together. The go-kart, we’d work on it here and there. With the car, we spend numerous nights together out in the shop every Monday through Friday, and then Saturday at the track. It’s a big family sport — that’s what I love about it. My father-in-law helps out at the track,” he added of Richard Wilson. “My wife, Ashley, is always there. My mom, my sister Jessica Schuman and her husband, Andrew Schuman, are always in the stands cheering us on.

“We don’t have 5 or 10 people working on the car like some of these other cars do. It’s basically me, my dad and my father-in-law. And I run them pretty ragged most Saturday nights.”

“I don’t know why we’re so fast,” Hill said. “We’re kind of ahead of the game, but I don’t know how or why, but even back in the 602 [motor] days — I think that was 2010 to about 2015 when we ran the 602 motors — everyone had the same shocks, and the engines were sealed, and you had to buy everything else from the track. I don’t know why we are so hard to beat or what we figured out.

“Now that they’re running the 604 engines and we’ve got Pensky shocks, this thing is unstoppable. We got 11 wins this year in the RUSH weekly points races, got the championship, and we traveled a bit. We went down to Georgia in February, where we ran third the first night and 10th the second night. That was pretty fun, definitely a new experience.

“We’re trying to get an early jump on the season, get the car to going. I’m hoping Dad will say yes to going to East Bay, Fla., this February and see how we do there, and then see what we think about the rest of Daytona Speedweeks.”

On defending the title again, Hill had this to say: “I believe we’re going after the championship. We talked about it last night. RUSH has a lot of big races this year that we had to miss because we were running the weekly program at Delmar.

“We’re going to see how it goes in the early season, play it by ear. I’d really like to hit some of the bigger races this year. I definitely feel I have a good car to compete with the ones who win. They have a $10,000.00 to win at Lernerville Speedway,” he noted of the Sarver, Pa., venue, “during the Firecracker and a $51,000-to-win at Virginia Motor Speedway this year I’d like to try.”

“We could have gone to Lernerville last year, but we stayed home and ran Delmar,” Hill recalled.

In addition to the support of his family, Hill’s main sponsorship comes from Courtland Manor. On the side panels with them are Lynch’s Towing, Penske Shocks, K.W. Construction, Kruger Trailers, Pepper Lawn Care and Jamie Stephens.

One local show Hill is looking forward to is the 2020 Battle of the Bay Speedweek that kicks off at Delaware International Speedway (DIS), presented by Wehrs Machine & Racing parts in mid-April. It will be the event’s fifth running. From DIS, the Battle heads to Georgetown Speedway for the second of four nights. Friday and Saturday nights, the campaign heads to Potomac and Winchester speedways.

For a father/son race team who entered the sport of racing with little knowledge or experience the Hills have excelled against the region’s top competitors, who now know that when the Hills’ hauler is in the pits, there will be a tough fight for the win.