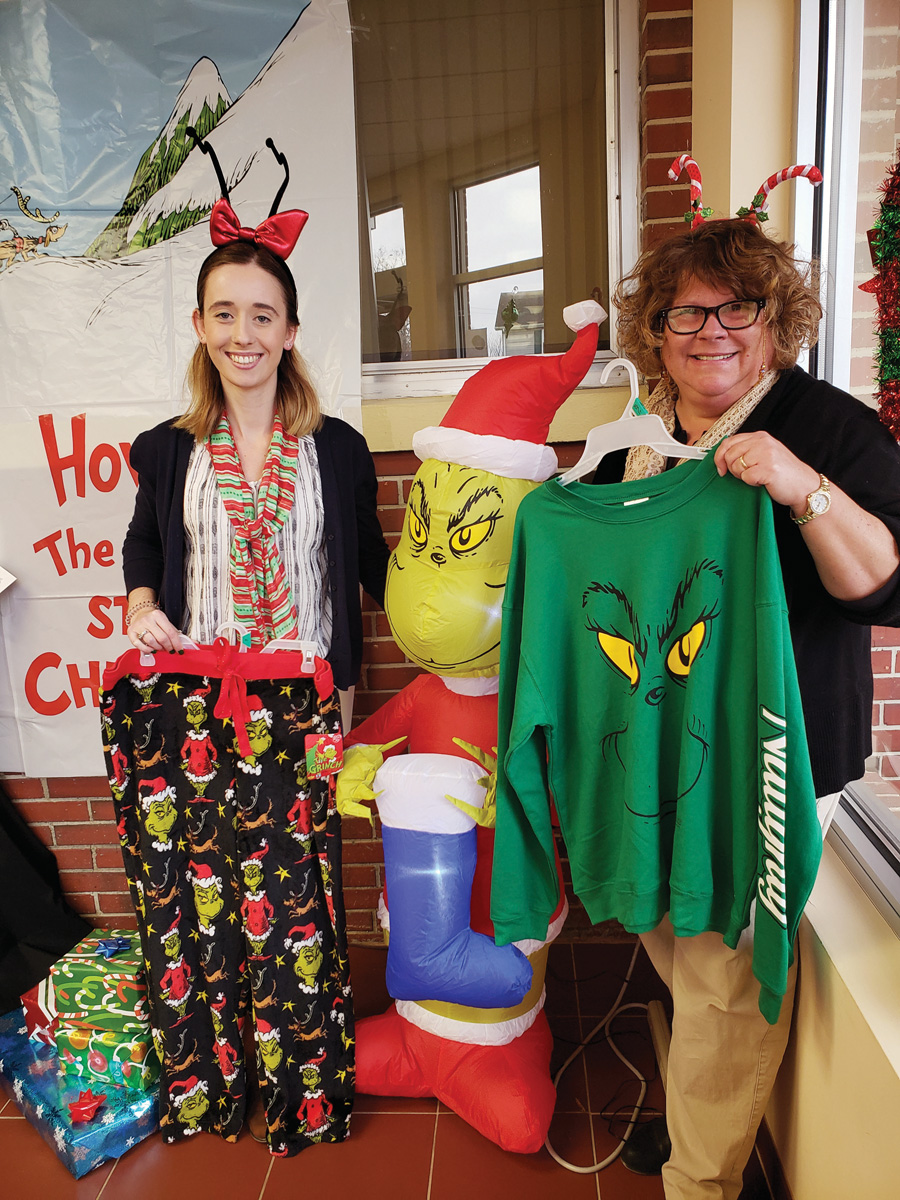 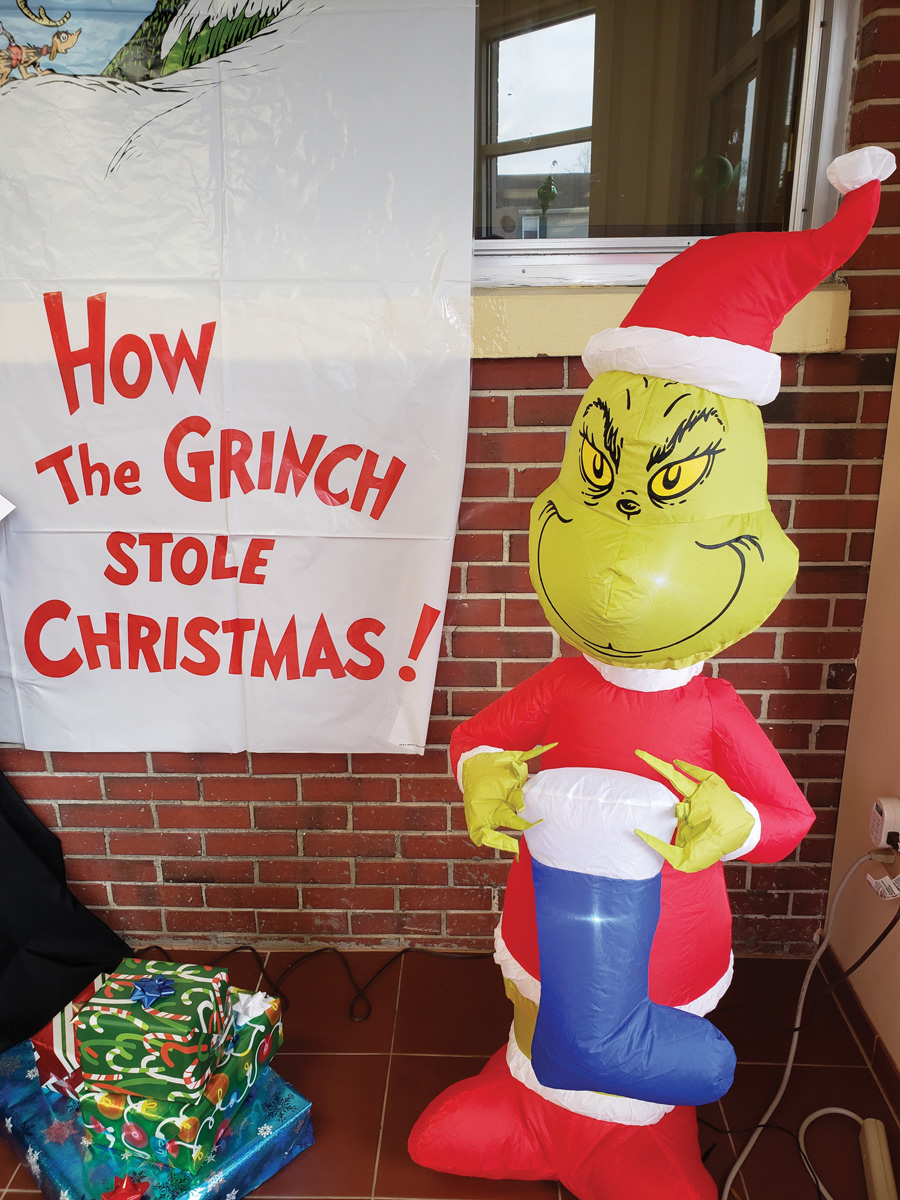 During the Grinch’s annual attempt to steal Christmas, the pot-bellied grouch is making merry at the Frankford Public Library, where guests can enjoy movies about his antics and — with apologies to Dr. Seuss — snack snacks and craft crafts.

“We’ll have Grinch-related activities throughout the week at our Grinch-a-Palooza, starting on Saturday, Dec. 21,” said a convivial Betsy Reichart, director of the library, where an inflatable Grinch greets patrons as he stands next to a backdrop and table artfully arranged with books, stuffed toy characters and related items.

“We made it later in the month because there is so much going on in the middle of the month. Christmas week, kids are off from school. We always trying to have programming for kids when school is out,” she said.

Other activities include ornaments that children can make now, before Christmas, and, on Wednesday, Dec. 18, a workshop to create toys for dogs that need homes.

As Christmas approaches, kids-at-heart remember that the cynical, miserable Grinch wanted to steal the beloved holiday. Yet, despite his disposition, he’s been loved by readers since the classic book, written by Dr. Seuss, was published by Random House in 1957 and the author’s words became immortal: “And he puzzled and puzzled ‘till his puzzler was sore. Then the Grinch thought of something he hadn’t before. What if Christmas, he thought, doesn’t come from a store. What if Christmas, perhaps, means a little bit more.”

“Grinch-a-Palooza will kick off on Dec. 21, with a chance to meet the characters and see the movie. Kids will get swag bags with Grinch items, such as pencils, in them. From 11 a.m. to 1:30 p.m. that day, we will have staff in costume like Cindy Loo Who and Max the dog. We will be dressed in Grinch gear. The whole staff will be in that gear. Our circulation coordinator, Meghan Hamilton, will be Cindy Loo Who. She looks just like her.

“Rachel Jackson, our children’s coordinator, will be Max, the dog,” she said.

During the Grinch-a-Palooza event, the Grinch movie starring comedian Jim Carrey will be shown, as well as other versions of the film, and guests will receive snacks and have photo opportunities.

“This event is for anybody who wants to come, primarily for kids. If they want to dress up, they can. The focal point will be on the Grinch display and the movie,” she said. Of course, there will be popcorn with the movie.

On Monday, Dec. 23, at 2:30 p.m., patrons will create a Grinch vase that Reichart characterized as “really cute and adorable, and suitable for a young child to give as a gift to a mother.”

Adults must stay with children while they are making the vases. To register for the craft, call the library at (302) 732-9351.

The library will be closed on Christmas Eve and Christmas Day, but the fun continues at 4 p.m. on Thursday, Dec. 26, with another Grinch-related activity.

On Saturday, Dec. 28, at 11 a.m., Grinch-a-Palooza will conclude with the showing of the original cartoon version of the movie, from 1964.

“We’re like the little library that does. We’re very excited to serve our community. We all work together. We have monthly meetings. We talk to each other throughout the day, and we come up with ideas. The new thing is this Grinch-a-Palooza,” Reichart said.

“How the Grinch Stole Christmas is a classic piece of children’s literature for the holiday. Dr. Seuss’ book is an iconic children’s book. As a library, we should be highlighting that. The story is uplifting, and I think it really embodies the season. It doesn’t hit on any particular religion. In a way, it’s a take on the Scrooge story. It’s along the lines of that type of moral story, so it has a lesson,” she said.

Also in the spirit of Christmas, Jackson is planning a project to teach patrons how to make dog toys by braiding old T-shirts. From 4 to 6 p.m. on Wednesday, Dec. 18, the toys, suitable for playing tug-of-war or fetch, will be made for dogs available for adoption from the Brandywine Valley SPCA in Georgetown.

A dog from the shelter will go to the library to accept the toys. No pre-registration is necessary to make the dog toys.

“It’s important to offer these kinds of things to serve our community,” Reichart said.

“Our overall goal is to enrich, to educate, to provide what is enriching and what means something to them and to have them come in and see that the library offers more than just books or DVDs. Our programs are geared to bring the people in to work with a very friendly staff,” she said.

“Libraries are definitely changing. We do so much more here. We will offer ESL classes. We have bilingual storytimes. There is so much we do to bring our library to be a modern library. It’s an ambitious goal, but it’s a great goal.”