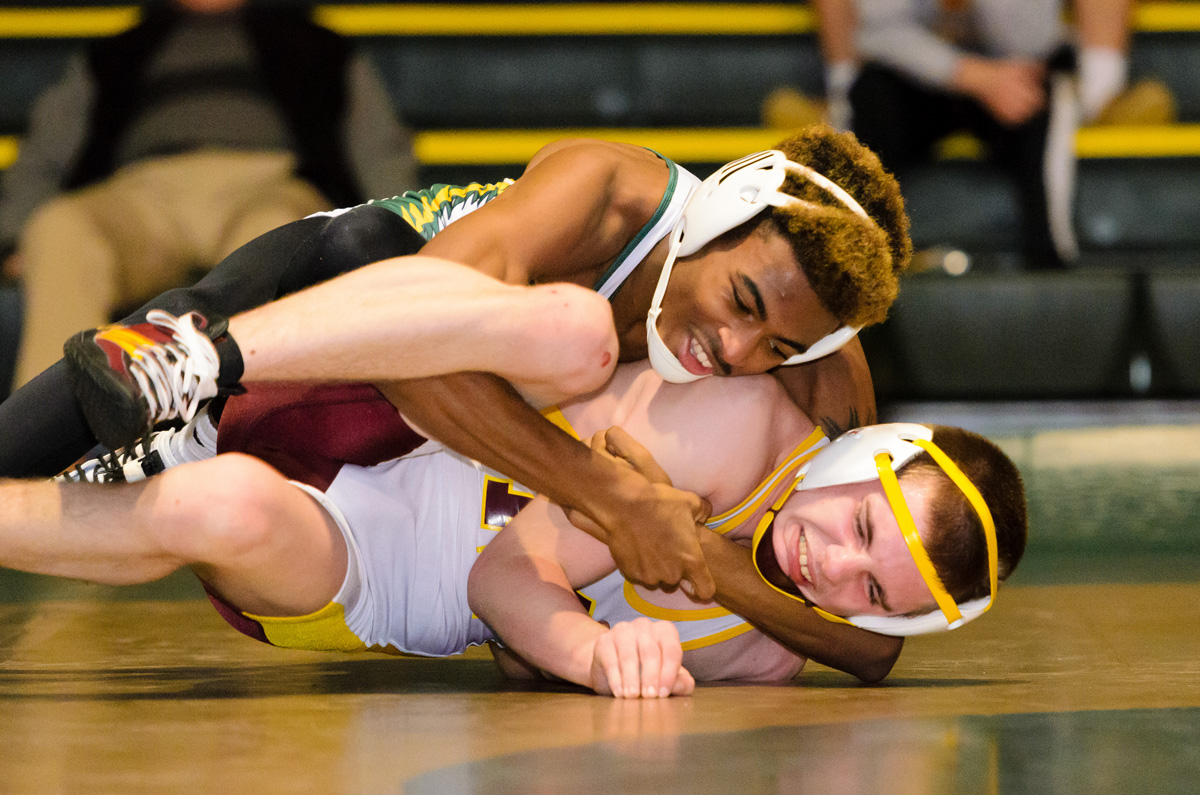 It has been a relatively successful start to the 2019-2020 campaign for the Indian River High School wrestling team. After a win in their season-opening dual against Lake Forest last week, the Indians turned their sights onto the first tournament of the season, at the Delmar Invitational.

Out of the 12 teams participating, the Indians finished fifth, with 147.5 points. Rival Sussex Central won the overall team title, with 242 points. Maryland’s Parkside was second with 173, while Woodbridge (170.5) and Lake Forest (150) were also in the top five.

“We were pleased with our overall performance this weekend,” said IR head coach Jeff Windish. “The kids wrestled well and saw some very good competition over the course of the tournament. We definitely saw some areas we need to improve upon, so we will take the next two days to clean some things up prior to our match with Dover,” he said of a Wednesday, Dec. 18, match.

“Ian wrestled an outstanding tournament, knocking off some very good kids along the way,” said Windish. “He put a great deal of work in during the off-season, and it is paying dividends right now.”

Cristian Galindo-Lopez and Ta’Jon Knight were each runners-up, at 113 and 138, respectively. Galindo-Lopez was pinned by Sussex Central’s Dylan King in the third period at the 5:43 mark. Knight also dropped his final by pin to Middletown’s Willem Carl in 3:11.

Sophomore T.J. Burke and senior Ramond Turner each picked up third-place finishes in their respective brackets, at 220 and 285 respectively. Burke edged Sussex Tech’s Seth Layfield by decision, 8-7. Turner over-powered Delmar’s Chance Wells to get the slap at the 3:14 mark of their match.

Colin Hudson wrapped up the Indians’ place winners with a fifth-place result at 126. He rolled to a 10-4 decision over Parkside’s Devin Webb.

“Placing seven kids is definitely a positive for our first tournament appearance this year,” Windish assessed. “Ta’Jon and Cristian also wrestled very well this weekend, and made the championships, but came up a little bit short in their final matches. T.J., Ramond, Chris and Colin showed that they could battle back after losses. This type of persistence is important in early season tournaments.”

The Indians opened their season with a 46-28 dual meet win over Lake Forest on Wednesday, Dec. 11. The win gets IR off to a great start in their quest to win the Henlopen Athletic Conference South Division title this year.

After falling behind in the first contested match of the night, the Indians rattled off three straight pins from 113 to 126, thanks to Christian Galindo-Lopez, Ian Shaubach and Chris Saylor.

The Spartans got some points back with a decision at 132, but again the Indians responded with four straight wins to take a comfortable lead in the match at 41-9.

Wesley Brockson and Ta’Jon Knight each were awarded forfeits at 138 and 145, respectively, then Jalen Holland-Holloway decked his opponent in 1:44. Gerald Windish rolled to a major decision in his match at 160 to cap the four-in-a-row.

Lake Forest would take the next four matches, from 170 to 220, to make things close, but Ramond Turner put the finishing touches on the win with a quick 55-second pin at 285 for the final margin of victory.

The Indians were set to make the trek up to Dover on Wednesday, Dec. 18, (after Coastal Point press time), to take on the Senators in their final dual meet before the holiday break. They will be competing in the nationally-recognized Beast of the East tournament this weekend at the University of Delaware.

Results from the dual and the tournament will be available on the Coastal Point sports Facebook page.