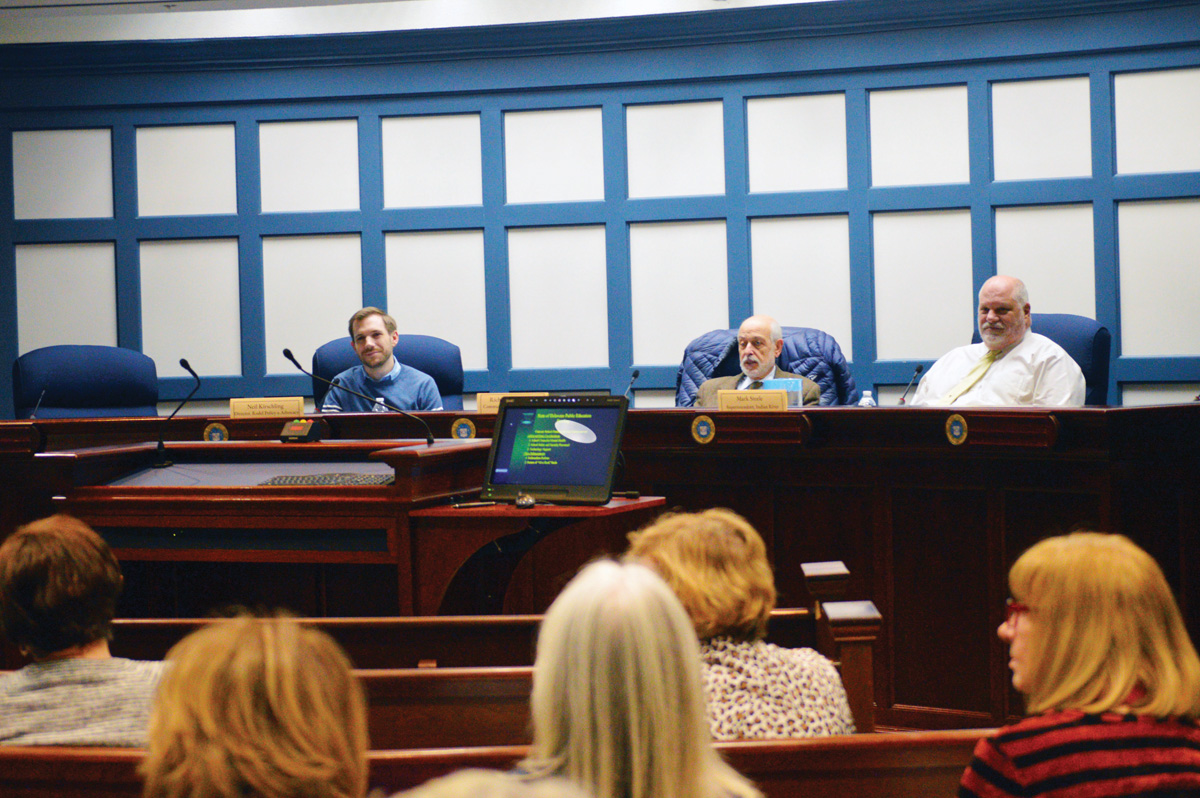 Lawsuit and legislators could decide what that means

It’s an important issue, and it’s complicated: how to pay for the education of young Delawareans who will make up the generations running the world in the years to come.

“We know the courts don’t want to get involved unless there’s no other way to approach this problem,” but it seemed like nothing substantial was being done, said Richard Morse, senior council at Community Legal Aid Society Inc. (CLASI), who is assisting in a current lawsuit against the State and its county governments for failures in educational funding.

As lawmakers and lawyers dig into the matter, experts explained the situation in Georgetown at a Dec. 4 forum — the second part of “Funding of Public Education” — hosted by the League of Women Voters of Sussex County and the American Association of University Women AAUW).

The event was the follow-up to a Sept. 25 forum that covered the basics of how education funding works but led to more questions about potential inequities, the lawsuit and possible solutions.

Despite launching multiple task forces over the past 17 years, lawmakers have done too little with repeated recommendations to improve learning conditions, Morse alleged. Finally, a group of concerned citizens decided to take legal action.

The lawsuit was filed in the Court of Chancery in January of 2018.

Being sued in their official capacities are the governor, state treasurer, secretary of education and county finance directors. The plaintiffs are Delawareans for Educational Opportunity (parents and citizens from across the state) and Delaware’s NAACP, but they are supported by the ACLU, CLASI and an out-of-state law firm that historically does pro bono for people in need.

According to the Delaware State Constitution, “The General Assembly shall provide for the establishment and maintenance of … efficient and free public schools.”

Morse said the numbers were more dire for 11th graders, who should be preparing to graduate high school, ready to enter the workforce or college.

“If they’re below proficient, then … they need some help, some kind of intervention to help them to do better,” he said.

“The problem is that educators throughout the state are doing the best they possibly can, but they do not have enough resources,” Morse continued. “So we filed this lawsuit to have the judge say to the State and Department of Education, ‘You need to spend more money to help the teachers do what they need to do to educate these children.’”

Also problematic is the counties’ role in collecting local property taxes on behalf of the school districts. Although real estate values have shifted and soared, the county governments haven’t officially reassessed property values in decades (1983 in New Castle, 1986 in Kent and 1974 in Sussex).

That can impact how many dollars are being spent on education. Since the county numbers won’t change automatically or more often, school districts in need of additional funding have to appeal to change the tax rate in public referendums.

“Delaware is one of only two places in the country that doesn’t have frequent reassessments,” Morse said, although he said he hasn’t determined which is the other state.

In additional, Sussex County — one of the fastest growing places in the region — has no impact taxes for education, public services or infrastructure (besides sewer hookup).

Because the lawsuit contains two major allegations (state funding and county assessments) that pursue different legal and factual issues, the lawsuit is proceeding down two different paths that will be tried separately.

“It’s proceeding almost as if it were two lawsuits, but it’s still one lawsuit with one judge,” Morse said.

The “state track” will begin in autumn of 2020, and the “county track” could possibly occur in late spring or summer.

Delawareans don’t have to sit and wait for something to happen. Besides voting in the school board elections in May, people can speak up now. Laws could be changing, whether by elected officials at the state or county level, or initiated by the courts (or both).

“So the major contributions the case needs is for folks to call up their legislators. … The people elected shouldn’t have to wait for a judge to tell them what to do,” Morse said.

“It’s tough to get behind,” said Mark Steele, superintendent of the Indian River School District. “It’s just being able to find that legislator or group of legislators to get it to go forward.”

Politically and realistically, changing Delaware’s rules of education funding would be hard work. Overhauling any system is tough. But Delaware wouldn’t be the first state to adopt a new formula due to litigation, so lessons can be learned, said Neil Kirschling, the director of policy and advocacy at Rodel, a nonprofit working to improve Delaware’s education system.

In Kirschling’s opinion, the biggest obstacles would be working through the uncertainty. Although legislators aren’t particularly clamoring to change the unit count system that determines school district funding based on student population, “There’s appetite in the legislature to look at education funding,” Kirschling said. “It’s a really nuanced topic. It’s about the students. And if you are generating different money based on if you move across district lines, and you have the same needs, that’s difficult, in my mind.”

If and when reassessment occurs, lawmakers would need to put protections in place: high and low caps to prevent extreme changes to property taxes, or mitigations for schools that are technically receiving more than they need.

“It’s hard for the general person to understand funding for districts. And it should be very transparent, easy — but it’s not,” Steele said. “I would say the superintendents in this state think it’s time for a change.”

In terms of funding, “We are high nationally, but low regionally. We spend less overall and pay teachers less than our neighbors of New Jersey, Pennsylvania and Maryland,” Kirschling said.

The Indian River School District receives an average of $13,475 in funding per student.

In Delaware, the State issues funding through “unit counts” instead of student population. Delaware doesn’t give X amount of dollars per child. Instead, they issue staff “units,” or positions, based on student population. Individual students are “weighted” differently, based on their age or severity of their needs. So, Delaware agrees to pay 70 percent of salaries, which could mean more or less funding to an individual school, based on the individual teachers’ education and experience.

That’s why some schools technically get more money per student, because staff have different salaries. While 16 kindergarteners might garner one teaching unit, 15 general students wouldn’t necessarily hit that mark.

There are pros and cons to every system, although other states have more flexibility by issuing dollars per student. But just as important is how money is spent.

Student enrollment has grown over time and continues to grow, both in terms of regular enrollment and that of students with high needs (such as students from low-income families and English language-learners). And while its overall population has grown substantially, Sussex County’s ELL percentage has grown nearly as much as the other two counties’ combined.

“Until the Opportunity Funding came through … for 20 years, we’ve been educating those students who came into our district … with no additional funding from the State,” Steele said. While these are appreciated, Steele said grants are not permanent, and he’d like to see other lost funding be restored.

For instance, this is the third year since Delaware’s budget crisis that school districts have dealt with “state givebacks,” a direct reduction in regular state funding. This year, some of IRSD’s $2 million giveback came from measure that included leaving staff positions vacant and $500,000 reduction in the regular operating budget.

Other funding issues in the state include referendum reform, mental health, school safety, technology, busing and a simpler process for out-of-state teachers to bring their credentials to Delaware.

PowerPoints presentations from the second forum are posted online at https://my.lwv.org/delaware/sussex-county-delaware, which is the website for the League of Women Voters of Sussex County. Delaware’s AAUW is online at https://aauw-de.aauw.net.