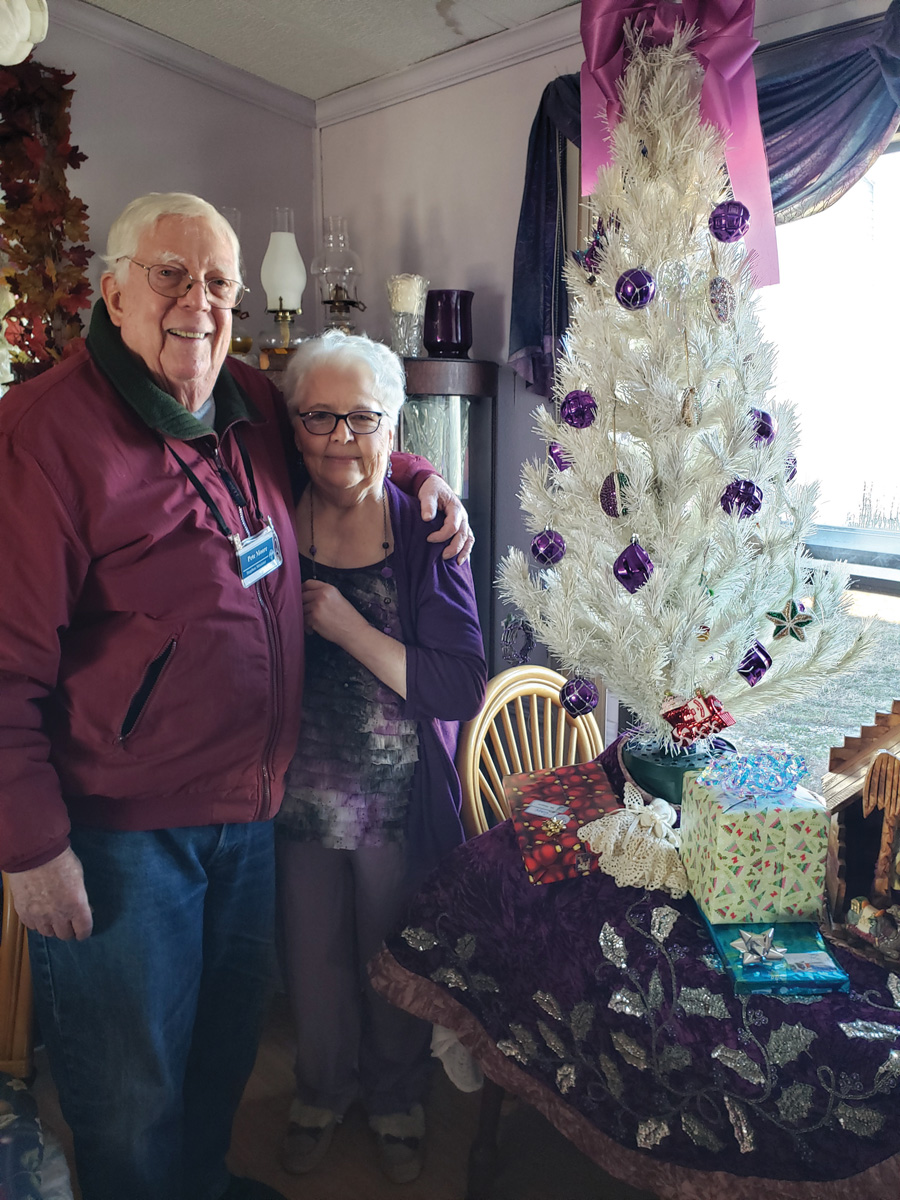 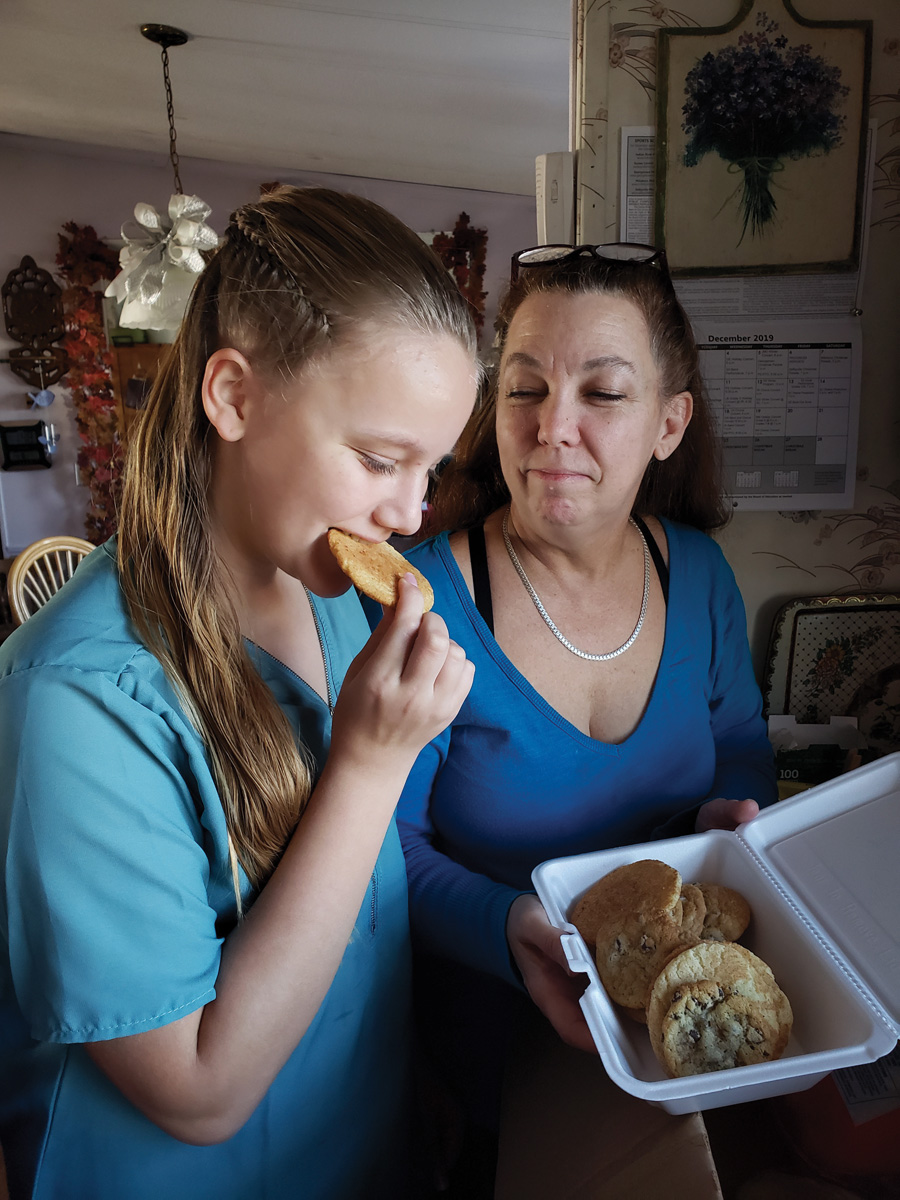 Feed My Sheep ministry brings more than food to community

The big box of groceries on the kitchen counter in Linda Van Brunt’s South Bethany home — makings for a hearty Christmas dinner, plus freshly baked cookies and holiday cakes — meant there would be a traditional dinner for her family of four, but there was deeper significance for the 78-year-old Van Brunt.

“This is a huge indicator of a God that cares. These people who deliver, they are the hands of the father,” she said, smiling at Pete Moore of Millville, who arrived with her box on Thursday, Dec. 19, as part of Mariner’s Bethel United Methodist Church’s Feed My Sheep ministry.

Moore is one of several volunteers who not only transport holiday boxes of groceries but also hot meals to families including Van Brunt’s just about every Thursday of the year, sometimes with the help of his amiable brother-in-law, Ray Danieli of Frankford.

The Feed My Sheep ministry weekly provides soup, a casserole, bread, dessert and the latest edition of Coastal Point newspaper, taken to the front doors of those in need. Meals are produced by volunteers who arrive at the church early and are assisted by two or three dish-washers, four people who help prepare, three to four servers and a clean-up crew.

Lunch is also available at the church, for anyone in the community and for a donation, from 11 a.m. to 1 p.m. each Thursday.

“These cooks make all kinds of things. The other day I brought home Chicken Brunswick soup. It was good. We get a lot of venison donated to us, so we have venison chili and venison soup. There are casseroles, pasta dishes… In-house we have bacon-, lettuce-and-tomato sandwiches sometimes,” Moore said.

Van Brunt, a friendly and gregarious ordained minister who grew up in Oklahoma, underwent triple bypass surgery and valve replacement in 2014. In rehabilitation, she was warned she couldn’t be alone day after day. She is divorced, with three sons living outside the area, so she appealed to her daughter, Cassie Van Brunt, who resided in Seaford.

“She turned her life upside-down to come live with me,” said the mother, sitting at the dining room table of the home situated near the picturesque Indian River Inlet, decorated in shades of her favorite color: purple. The walls are lavender, and deep purple ornaments contrast with the white Christmas tree. Even Van Brunt’s fingernails were painted a deep shade of purple, to match the outfit she wore.

She expressed appreciation for her daughter for also home-schooling Van Brunt’s great- granddaughter, 13-year-old Walela Simmons, and looking after her grandson, 16-year-old Gage, a high-school student, who both live with them.

“The kids call me ‘Jammie.’ I think that started because my granddaughter couldn’t say “Granny,’” she said, laughing and explaining the name Walela means “hummingbird” in the language of the Cherokee.

“Cassie is a bloom-where-she-is-planted kind of person. She redecorates, and she is wonderful about fixing things,” her mother said.

Thursdays had become difficult for the mother and daughter, because there were appointments to keep with doctors and shopping to do.

“I’d feel sorry for her. We would come home, and she would look in the refrigerator and sigh and say, ‘What’s for dinner?’ I couldn’t stand up for long to help her because I get dizzy,” Van Brunt said.

About six months ago, she called Susan Wingate, a friend who attends Mariner’s Bethel, and asked if she would be eligible for Feed My Sheep.

“They said yes right away. What does it mean to me? A bunch. It means a bunch. We don’t just get boxes at Christmas and Thanksgiving. We get a hot meal every Thursday. The meals are so bountiful they usually last two days. I love their sausage soup. I love their venison chili.

“And Pete has become a dear friend to me. He is usually on the fly when he comes here, but he takes the time to pray for me,” she said, reaching for Moore’s hand as he nodded and looked at her with a tenderness familiarity allows.

“These people are my family, all of them,” said Moore, soft-spoken with pretty white hair and a quick grin.

“I love every one of them, and I’m included in their day-to-day lives. I just lost one of mine on my route when she went into a nursing home. She was housebound. She lost her little dog. It got hit by a car — hit-and-run. Her neighbor was nice and went to New York City and brought back this huge mixed-breed named Homer. It was so docile,” he said, explaining that a neighbor had adopted the dog when the woman went into nursing care.

Moore is among a group of several church volunteers and has a regular delivery route.

At Christmastime, recipients receive a chicken or turkey, and groceries such as eggs, milk, canned vegetables, stuffing mix and dessert.

Everything is paid for by donations and church events, including the recent Cookie Walk & Craft Fair.

“I deliver to one lady, but I never see her. I knock on the door. I leave the food and her son picks it up. They have no running water. When you get out into the countryside, it’s not like Bethany.

“We deliver in a 12-mile radius of the church. In some cases, we go out 20 miles. People apply for help. They call the church and tell them what they need, and we don’t question them. We don’t make them fill out any forms or anything. We just help them,” Moore said.

“Making these deliveries, it makes my Christmas and it makes theirs.

“The people I deliver to, they are all just great people. It’s what God has intended this ministry for. All our volunteers, God has chosen them to deliver to these people,” he said.

“And he has chosen our volunteers to love them.”