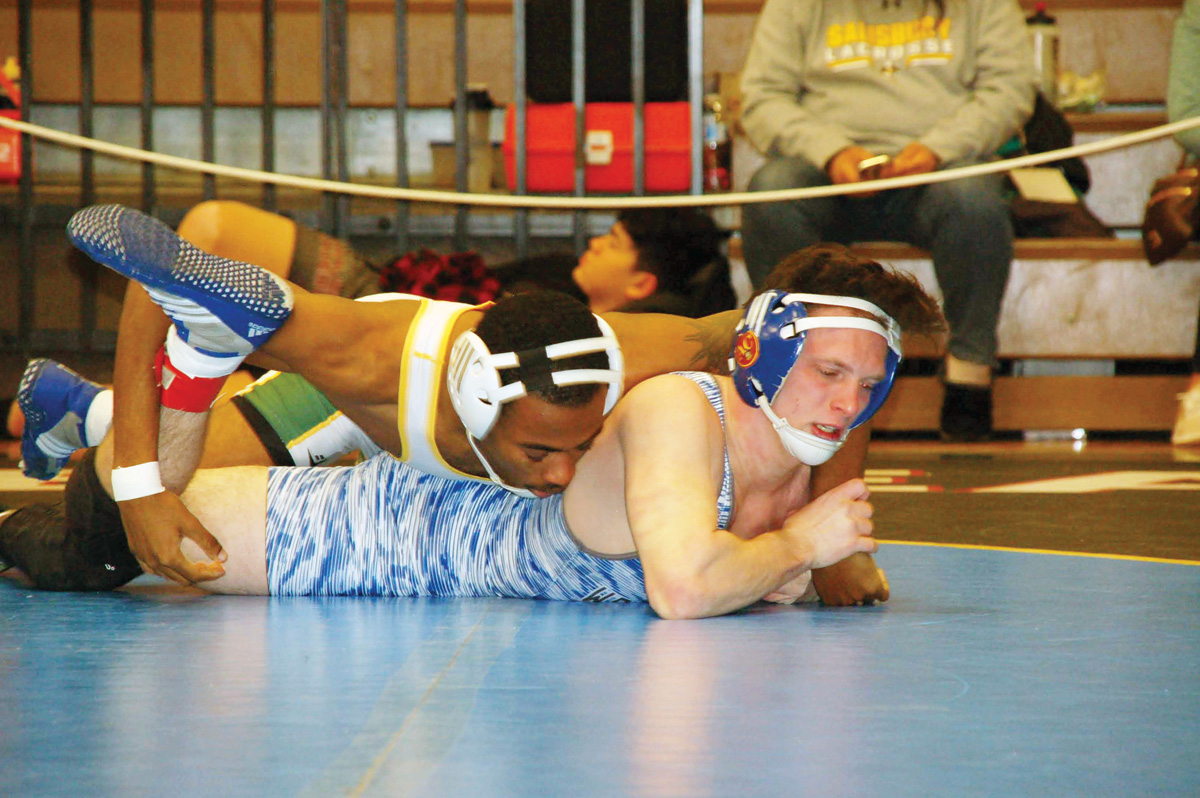 It was another jam-packed weekend of wrestling action last week for the Indian River High School squad as they made the two-hour trek north to Wilmington for the Delcastle Invitational tournament.

Solid performances from several wrestlers allowed the Indians to finish seventh overall (109 points) in the team standings out of the 26 teams that participated. Caravel Academy took the team championship with their 219.5 points, followed by Salesianum with 212.5 points. Henlopen Conference power Caesar Rodney was third with 186 points. Woodbridge (153.5), William Penn (151.5) and Sussex Tech (110) were the next three teams in the standings, just in front of the Indians.

A trio of wrestlers scored big points for the Indians with their second-place finishes in their respective brackets. Ian Shaubach (120 pounds), T.J. Burke (220) and Ramond Turner (285) all picked up silver medals in the two-day tournament.

Shaubach, who has 82 wins in his IR career, pinned Michael Atchley of First State Military Academy in his first-round match and followed that up with a tech fall (16-0) over St. Andrew’s Theo Taylor. In the semifinals, Shaubach decked Polytech’s Michael Rodriguez to punch his ticket to the championship round. There, Shaubach was edged out by Caravel Academy’s Dylan Knight in a 5-2 decision.

“Ian Shaubach improved his season record to 15-5 and had an outstanding tournament, placing second,” Windish said of his lightweight leader. “We learned a lot from this loss and will work on these details as the season progresses.”

Burke, just a sophomore, received a bye in the first round based on his draw, then picked up a pin over Salesianum’s David Escobar-Huertes at the 2:24 mark. Burke then clipped CR’s Josh Dyer, 5-4, in the semifinal round to advance to the championship. In the final, Burke got caught in the second period before getting rolled up to lose by pin at 3:19 to Sussex Tech’s Seth Layfield.

“T.J. Burke knocked off two quality opponents on the way to the championship match,” continued Windish.

In the heavyweight bracket, Turner cruised in his second-round match after a first-round bye, with a pin in just 1:40 over Newark’s Kalum Prino. He took down Delcastle’s David Ironkwe in overtime, thanks to a 2-1 decision in the semifinals. In his championship final, Turner — who currently sits at 97 wins in his Indians’ career — dropped a 2-1 decision to the state’s top ranked wrestler in CR’s Kevin Hudson.

“Ramond had the opportunity to see two state-ranked wrestlers [last] weekend,” added Windish. “He defeated Ironkwe in an electric overtime match, then lost to No. 1-ranked Hudson of CR in the finals.”

The Indians also got a third-place finish from Ta’Jon Knight in the 132-pound bracket, and a fifth-place result from Cristian Galindo-Lopez in the 113-pound bracket.

“Ta’Jon suffered a loss in the semifinals on a last-second takedown but came back to place third, knocking off a state placer from Delaware Military Academy,” Windish said. “Cristian had a very good tournament. After a tough quarterfinal loss, he wrestled back, and took fifth, picking up valuable points for the team.”

The Indians had a dual match with Henlopen Athletic Conference South Division rival Seaford scheduled on Wednesday, Jan. 8, (after Coastal Point press time) before tackling the Hammond Duals tournament over in Hammond, Md., this weekend.

“We are looking forward to this weekend,” Windish concluded. “We will be seeing some new opponents, which will be a nice change of pace, and provide each wrestler with eight to 10 matches over the two days.”

This will be the last tournament for the regular season for the Indians as they embark on a dual-match schedule over the final month of the season. They will host three of those duals over their final 10 matches, with the first coming on Wednesday, Jan. 22, against Laurel at 6:30 p.m.