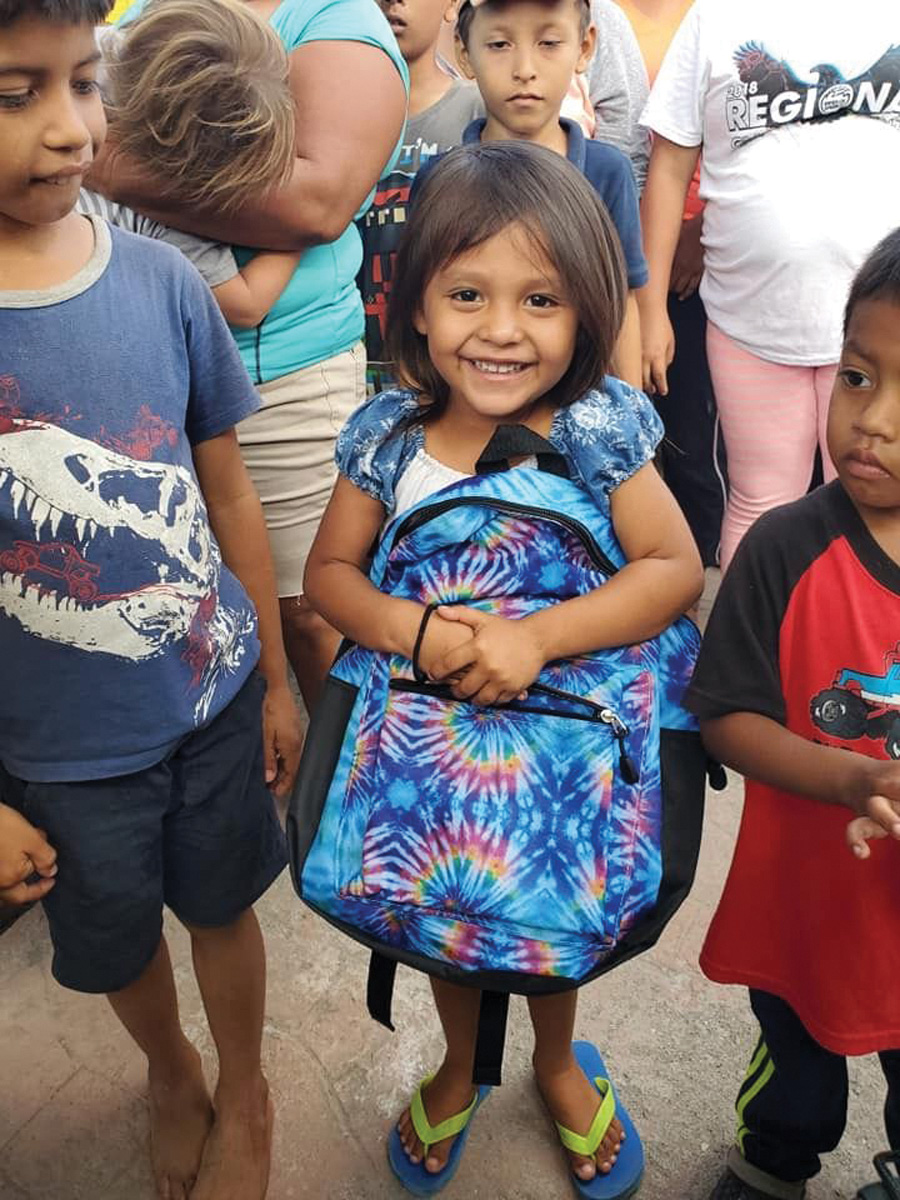 Spurred on by a desire to be of some humanitarian assistance to thousands of men, women and children asylum-seekers in Mexico awaiting entrance at the Texas border, Sussex County residents Jessica Clark and Debi Goebel found St. Peter’s & St. Paul’s Episcopal Church in Mission, Texas.

Although they determined that a physical presence for their Asylum Seekers Project, based 2,000 miles away from the church, was impractical, they felt their fundraising efforts could be of benefit.

“I think so many of us feel helpless when we see the suffering these asylum seekers must endure, particularly the children,” Goebel said of the impetus for the project. “Supporting the work being done by St. Peter’s & St. Paul’s will have a direct impact on families who have been forced to flee desperate poverty and unending violence in their native homes.”

Church members delivered food prepared by congregants and other supplies (backpacks with school supplies, toiletries, toys, a bit of candy and, as funds permit, sleeping bags) to the detainees.

Parishioners also delivered other supplies to the Catholic Charities Humanitarian Respite Center in McAllen, which assists asylum seekers in relocating to families in the United States while they await a court date. The Center temporarily fed and sheltered 600 to 1,000 asylum seekers a day.

In January 2019, with the United States’ Remain in Mexico policy pending, it was estimated that more than 50,000 asylum seekers had been sent back to Mexico, a country deemed unsafe for Americans to travel. Asylum seekers must wait for months, possibly years, in dangerous Mexican border towns, fending for themselves, without healthcare, work opportunities or school for their children. When the policy was applied in August 2019, the McAllen Respite Center became practically empty, welcoming only about 10 asylum seekers a day.

Undaunted by the Respite Center closure, the Texas church now coordinates with a local relief organization, Mateo 25:35 (based on Matthew, “For I was hungry and you gave me something to eat, I was thirsty and you gave me something to drink, I was a stranger, and you invited me in.”) to deliver food and supplies to approximately 2,000 waiting in a tent city and others sleeping on the ground under the Brownsville Bridge leading from Texas to Matamoras, Mexico.

Asylum seekers don’t dare leave the relative safety of the encampment, though the conditions are squalid and dangerous. They wash and bathe in the Rio Grande River. Many expect to be kidnapped, and many have been kidnapped more than once.

Every week, two or three St. Peter’s & St. Paul’s parishioners fix 600 to 700 taco meals or tortillas (50 pounds of meat and 30 pounds of vegetables) on Saturday. The average cost is $150 per week to buy ingredients. The church also spends about $300 per week to pay for tents, blankets and backpacks filled with supplies. Then a team of eight or more parishioners meets on Monday night to roll and wrap the mixtures. Others pack backpacks.

The food and supplies are loaded into garden carts, and church volunteers walk across the Brownsville bridge, pulling the carts. Everything is distributed in the Matamoras, Mexico, tent city and to those sleeping under the bridge.

In addition to providing meals, Kathy Whittier, St. Peter’s & St. Paul’s Episcopal Church project coordinator, commented, “Trying to provide necessities, as well as a bit of comfort and joy, the church recently purchased over 1,200 backpacks at $5 each. In each backpack are a wallet or purse, toiletries, a notebook, a pencil and a pen, a coloring book and crayons, a picture book, a stuffed animal, hair ties and a bit of candy. Many of these supplies are donated. All the rest are bought with donations from Episcopal churches or folks all over the country. I and my friends shop at thrift stores, discount stores and flea markets.”

“Our vision is that the Asylum Seekers Project will raise awareness of the plight of the thousands of men, women and children seeking asylum within our borders, as well as those awaiting entry,” Clark said.

“Our hope, now that the holiday rush is over, is that many communities and organizations will donate to this worthy humanitarian project. We will accept monetary donations and forward them to the Texas church, or checks can be sent directly to St. Peter’s & St. Paul’s Episcopal Church, 2310 N. Stewart Road, Mission, Texas 78574, Attention: Mrs. Kathy Whittier. In the memo line, please add Asylum Seekers Project.”

Those wishing to volunteer with the project can contact Jessica Clark at (302) 430-2898 or email jclark165@comcast.net.

“Isiah 58:10: If you pour yourself out for the hungry and satisfy the desire of the afflicted,

Then shall your light rise in the darkness and your gloom be as the noonday.”