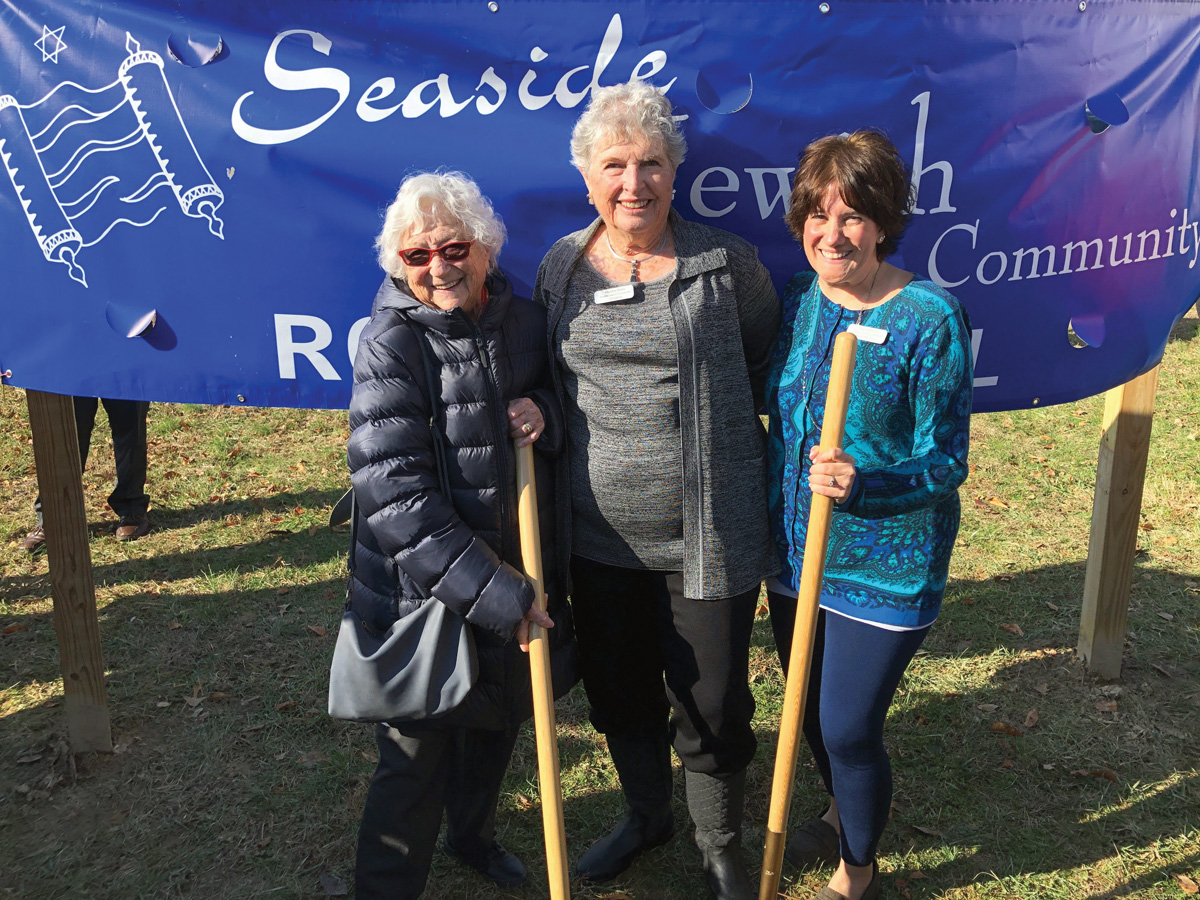 Seaside Jewish Community broke ground on the expansion of its synagogue in Rehoboth Beach on Jan. 5.

Outgoing co-presidents and long-time members Buddy Feldman and Alyssa Simon welcomed those attending. Religious school children kicked off the morning singing, “May God Bless this Holy Place,” a prayer of consecration. The sanctuary was overflowing, with many attendees waiting outside for the official groundbreaking because they could not get into the building.

Matthew Ash, chair of Seaside’s house committee and expansion project manager, said plans to enlarge the synagogue were first begun in 2016 when the leadership realized membership was outgrowing Seaside’s small home purchased in 2006. A decision to double the size of the building was made through a process of membership surveys, assessments and discussions with experts in the field of construction.

“The work of the house committee demonstrates the strength of Seaside as a community of volunteers,” he said, “with a committee of over 15 members meeting over 20 times during the past two years to plan the project.”

Seaside, established in 1997 by a handful of people, has grown to a membership of more than 400 families. Led by a part-time religious leader and a volunteer base, it is an unaffiliated synagogue and the only Jewish congregation in Southern Delaware.

Ash said the growing instances of hate and anti-Semitism in the United States led Seaside to consider adding additional security systems to the new synagogue.

“We heard of the availability of grants from the U.S. Department of Homeland Security. Through the Delaware Emergency Management Agency, our state-of-the-art security features will be paid for in part by a grant of $50,000 under the program. For that, we are very grateful.”

The $1.25 million expansion project will more than double the size of the sanctuary, add classrooms and social areas, improve accessibility, update the kitchen, and add new security, video and communication systems. Completion is anticipated in the third quarter of this year.

“We have a terrific team of local partners, and we look forward to working with Warfel Construction, Fulton Bank, Design Delmarva, Merestone Consultants, Harold Bair, Absolute Security, and others to create a new home to serve our members as we grow into the future,” Ash said.

“This is a day to rejoice,” said Blunt-Rochester, an invited guest and welcomed surprise speaker. “My heart is with you… We as a country are strong. It is our unity that makes us strong.”

“It inspires me what you do and how you stand up for what is right and good,” Coupe said. “You [as Jews] have the resiliency to endure so much… It breaks my heart. I don’t know what the solution is, other than love. We are here to support you.”

Schall emphasized the importance of mitigating security risks before they happen, and he said the agency already has been able to help fund security systems for three organizations besides Seaside with the new nonprofit security grant program.

The groundbreaking ceremony captured the synagogue’s 23-year history with a presentation by three presidents: Miriam Zadek, a founding member who served as president in the early years; Simon, who just finished her term as co-president; and Marsha Davis, who took over as congregation president at the beginning of this year. They each noted the highlights of the synagogue’s lifetime.

“We are building on the foundation and vision of these first members,” said Marilyn Feldman, chairperson of the expansion’s capital campaign. “We are so grateful for those who have helped us purchase the building, and now to those who have supported the expansion project, and those who will join us in this endeavor.”

Feldman thanked Epworth United Methodist Church in Rehoboth Beach, the Lewes Public Library and Saint Peter’s Episcopal Church in Lewes for providing space for services, religious school and programs while the synagogue is under construction.

Seaside offers an extensive schedule of worship services, youth and adult educational programs, and social activities. It also partners with many local organizations in a variety of activities and programs. Members participate in extensive interfaith initiatives to improve understanding and mutual acceptance throughout Southern Delaware, including partnering with Epworth United Methodist Church in its meal programs for international students and the homeless.

Seaside supports community service projects, including donations of clothing, assistance for the bereaved, ill and needy, and contributions to causes in the area. In addition, Seaside Jewish Community co-sponsors the Jewish Film Festival with the Rehoboth Beach Film Society, and presents frequent educational and scholarly programs that are open to the community.

Seaside Jewish Community is designed to be an unaffiliated, egalitarian and inclusive community that embraces all levels of observance and promotes a sense of extended family among members. For more information, visit the website at www.seasidejewishcommunity.com.