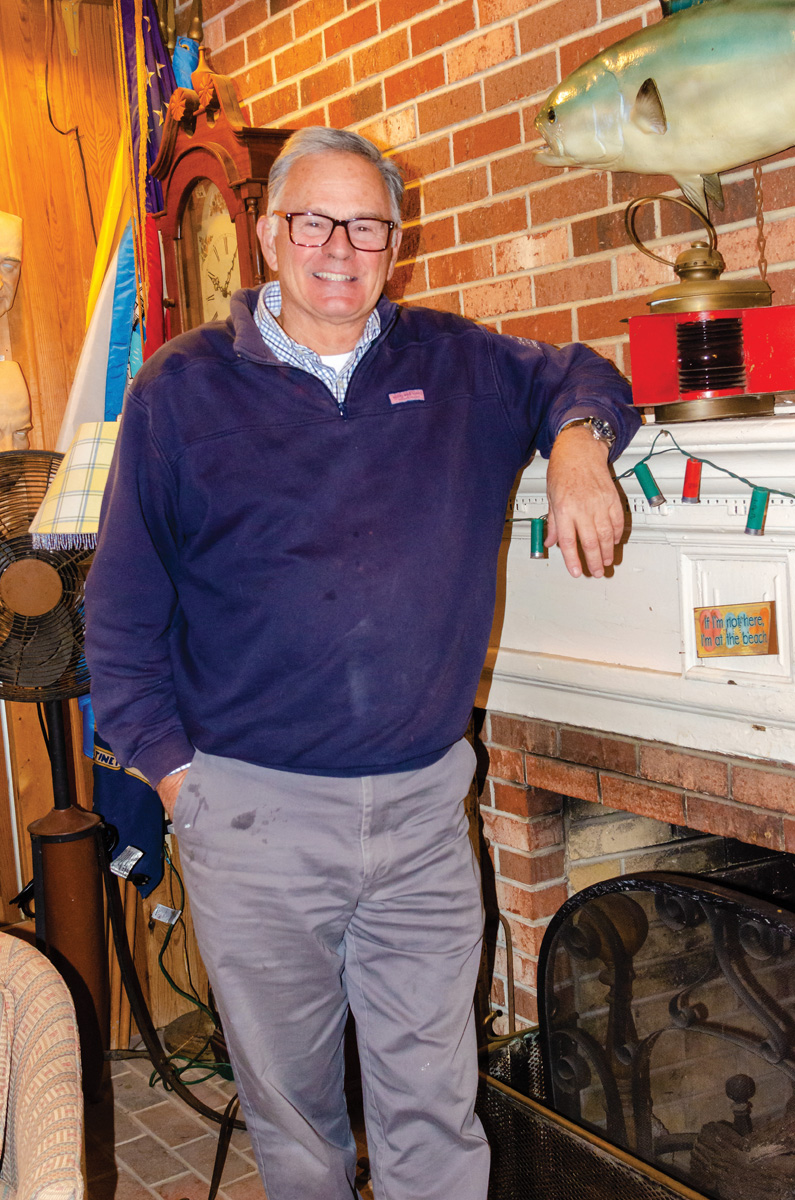 End of an era

It was business as usual at Beach Plum this week, with longtime owner George Cole bantering with guests about a variety of topics, not the least of which was Donald Trump.

Cole has a life-sized cut-out of the president in his antiques shop in Bethany Beach, which he is closing after more than 40 years (he opened the shop in 1976), and it catches the attention of those who are loyal supporters, as well as those Cole — a staunch Republican who served on the Sussex County Council for 32 years —jokingly calls “liberal hippies.”

“How much for Trump?” a customer asked with a smile one recent afternoon.

“He’s not going to lose,” the customer replied.

Cole launched into a story about friends who have teased him by turning his Trump, smiling and with his signature thumbs-up, to face the wall, and one who told him she has a similar life-size of former Vice President Joe Biden.

“Would you really?” a customer asked, and he nodded.

Cole, amiable and a master storyteller, said he is going to miss the customers who regularly arrive at the store, as much to admire antiques and find a deal as to converse with him, but he has no second thoughts about closing.

“I’m ready,” he said, adding he hopes to make his final sale within 30 days.

He won’t feel sad on the last day, he said, “because it’s not like I’m leaving.”

“I’m just going to do something else. A couple of my kids have the bike shop next door, and they want this space. They might expand the bike shop, maybe with other recreational gear, like kayaks. Or, they might open it as a café with coffee in the morning and ice cream in the evening. I’ll still be around. I’ll be involved,” he said.

Cole and his wife had six children, and the two who rent and sell bicycles “will likely absorb this side,” their father said of the space long occupied by his antiques business.

“I told them being an entrepreneur in Bethany is always interesting. It’s like a rollercoaster. It’s busy in the summer, then it slows down. It ties you down. Now that I’ve reached the age of 69, I don’t want to be tied down,” he said.

For years, the antiques shop has doubled as his office — “headquarters,” as he calls it — so he’s been there just about every day.

“I’ll miss going out and buying things. Everything I bought, I got on the Delmarva peninsula. I traveled some, to Ocean City, Salisbury, Rehoboth, Lewes. Most of it came from old homes. People retire, and they want to get rid of old stuff. Their kids don’t want it. They want a beachy look,” he said.

Items in the shop, at 900 Road 51 in Bethany Beach — including a bill from a sawfish and old surfboards he won’t part with — have cost from $2.50 up to a couple thousand dollars. Once, he sold an oil painting for $3,000.

“You develop a sense of value. I never had to do any research. I didn’t do much of that,” he said, describing the painting as being by a collectible artist from Delaware from the late 1800s who depicted ships. Cole has sold other paintings to collectors and still has one completed by a student of famous Delaware artist Howard Pyle. A native of Wilmington, Del., Pyle taught illustration at the Drexel Institute of Art, Science & Industry in Philadelphia.

“I was offered $10,000 for it, but I turned it down. My mother has it in her house. Oh, she loves it. It’s of George Washington in his coach. George Washington was on his farewell tour, and he came through northern Delaware. In the painting, he is in a coach, with his face looking out the coach window. He was in northern Delaware, and people were coming out to meet him,” Cole explained.

Early this week, Beach Plum, named by Cole’s mother for the beach plum trees that grow around the area, was still fairly full of inventory that included chests of drawers, rocking chairs, desks, mirrors, candle holders, lamps, pitchers, books, dinnerware and more. A striking German grandfather clock made from walnut wood, from the 1840s, has been reduced in price to $400.

“I won’t take a penny less for it, but you’re going to see a time when finding something like that won’t be possible,” he told a customer who admired it.

Maybe he’ll keep it, Cole mused, and find a spot for it in one of his rental properties.

Some items he won’t part with, like the “political things behind the counter,” he said, as he tended to a customer who purchased a handful of beach glass for $5, then reminded two more customers that prices have been cut 50 percent.

“If you don’t see a price, just tell me and I’ll make something up,” he called.

“You know one of the biggest draws of this place? The porch. The stuff I’ve had on it over the years,” he said, motioning from his chair near a fireplace inside the store to the long expanse filled with second-hand tables, benches, chairs, buoys and collectibles.

“I would leave and close the store, and I kept that stuff outside. Nobody stole anything. I never brought it in or put it away, and nobody touched it. Even kids didn’t steal this stuff,” he said.

Cole, who taught distributional education to adults at the Sussex County vocational school for a couple of years, and who has a real estate license, said antiques “were more the rage years ago.”

“It used to be, every weekend in here it was like a feeding frenzy, and sometimes they cleaned the place out. In the last couple of years, they’ve been less interested. The current generation is not interested. The look is not in. It’s about the look, and that’s just not what’s in ‘flavor.’ My grandfather used to play with antiques, and my grandmother started taking me to auctions when I was a kid. We had a lot of antiques in our home, but my wife got rid of a lot of it. It’s not the look now,” he said.

“They want IKEA,” a customer commented as she walked by.

“Right,” Cole said. “Have you ever been to an IKEA warehouse? Customers walk around hand in hand.”

The building where the antiques shop is located was inherited by Cole from his father, who purchased the building in the mid-1960s. When he decided to close, Cole put ads in local newspapers announcing a sale, but it wasn’t until he advertised that he was ending his long career “that they came out of the woodwork,” he said.

“People said they saw it on Facebook. Being here over 40 years, I’m going to miss some of the families, like that little girl that just came in. She’s the third generation I’ve sold to, and there’s a fourth generation. Sometimes all four generations would come in here together. One woman came in. She said, ‘Mr. Cole, you probably don’t remember me, but my mother used to bring me in here when I was little.’